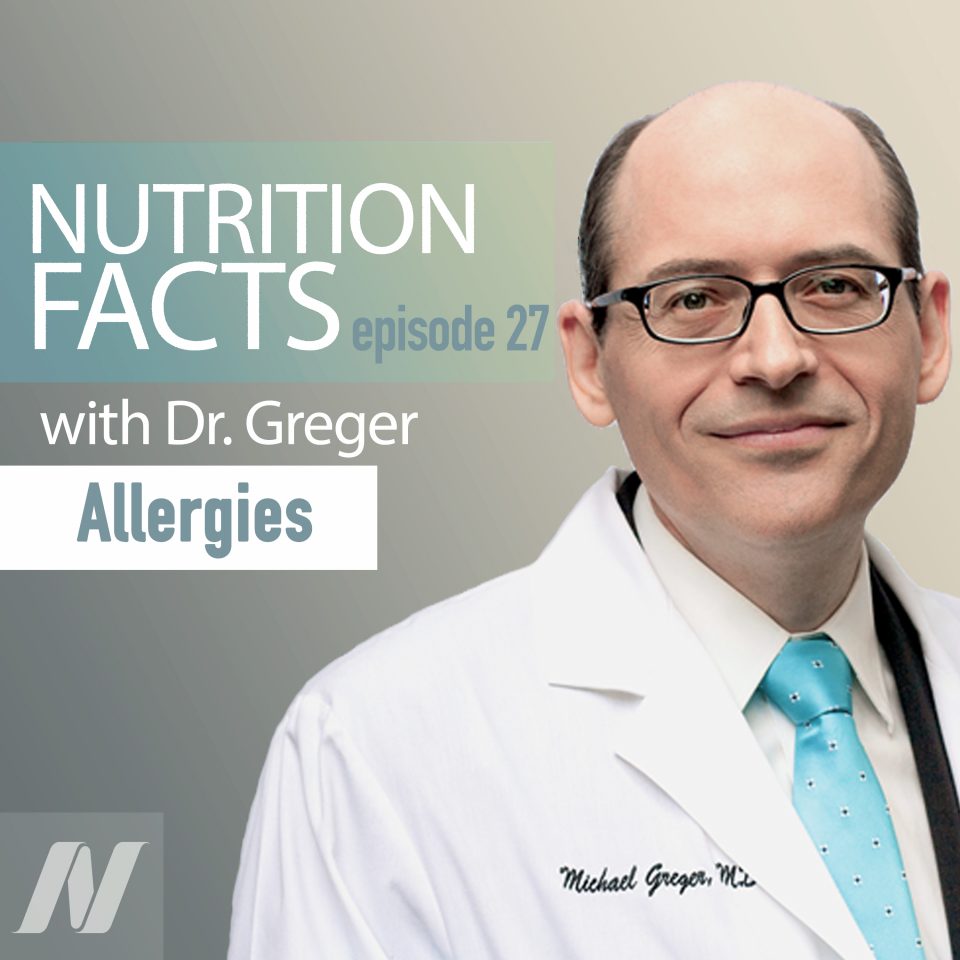 From sniffles to watery eyes to food allergies–there are some ways to lessen the effects of many different kinds of allergies.

This episode features audio from How to Diagnose Gluten Intolerance, Alkylphenol Endocrine Disruptors and Allergies, Boosting Immunity while Reducing Inflammation.

Welcome to Nutrition Facts.  I’m your host, Dr. Michael Greger, and I’m here to ask you, what is the most important decision you’ll make today, is it how you’ll get to work, who you’ll set up a meeting with, what friend you’ll call for lunch?  Well, as it turns out, probably the most important decision you’ll make today is what to eat.  What we eat on a day-to-day basis is the number one determinant of our health and longevity—literally.  Most premature deaths in the United States are preventable and related to nutrition.  So, we’re going to explore some smart nutrition choices based, naturally, on facts.  Here, we refer to the science, the research, the available data published in the peer-reviewed medical literature right now.  That’s why I wrote my book, How Not to Die, and why I created my nonprofit site NutritionFacts.org and, now, this podcast.

Today, we look into why a plant-based diet may reduce the risk of allergies.  Those eating the most fruit and vegetables have been found to be much less likely to report asthma or other allergies.  The consumption of red rice, green tea, and white button mushrooms may also help protect against so-called atopic, or allergic, diseases.

Not all food sensitivities are allergies, though–gluten, for example.  After a formal evaluation to rule out celiac disease, those who suspect they might have gluten sensitivity should first try improving their diet and then have other causes excluded before going on a gluten-free diet, since as many as 1 in 3 people who avoid gluten for symptom-control end up having a different disease altogether.  Here’s the research.

Symptoms of gluten sensitivity include irritable bowel type symptoms such as bloating, abdominal pain, and changes in bowel habits, as well as systemic manifestations such as brain fog, headache, fatigue, depression, joint and muscle aches, numbness in the extremities, a skin rash or anemia.  If those who suspect they might be gluten sensitive should not go on a gluten-free diet, what should they do?

The first thing is a formal evaluation for celiac disease, which currently involves blood tests and a small intestinal biopsy.  If that’s positive then one goes on a gluten-free diet, but if it’s negative we should try eating a healthier diet, more fruits and vegetables, more whole grains and beans while avoiding processed junk.

See, in the past, a gluten-free diet had many benefits over the traditional American diet because it required increasing fruit and vegetable intake; so, no wonder people felt better eating gluten free—no more deep-fried Twinkies, couldn’t eat in fast food restaurants.  Now, though, there is just as much gluten-free junk out there.  I call it the vegan doughnut phenomenon.  A few decades ago vegans were forced to eat healthy, eat actual vegetables, but now they can eat their cheesy puffs, while waiting for their candy-coated chocolate marshmallows to deep-fry in vegan bacon grease.

If a healthy diet doesn’t help, then I might add another step here, and that is try to rule out other causes of chronic intestinal distress.  When researchers study PWAWGs– that’s what they’re called in the literature (people who avoid wheat and/or gluten).  In a study of 84 PWAWGs, about a third didn’t appear to have gluten sensitivity at all, but instead an overgrowth of bacteria in their small intestine, or were fructose or lactose intolerant, or had a neuromuscular disorder like gastroparesis or pelvic floor dysfunction.  When those are all ruled out as well, then I’d suggest people suffering from chronic suspicious symptoms try a gluten-free diet and, if symptoms improve, stick with it, though maybe re-challenging with gluten periodically.

Unlike celiac disease, a gluten-free diet is begun not to prevent serious complications from an autoimmune reaction, but just to resolve gluten sensitivity symptoms to try to improve patients’ quality of life.  However, a gluten-free diet itself can reduce quality of life, so it’s a matter of trying to continually strike the balance.  For example, gluten-free foods can be expensive, averaging about triple the cost, and so most people would benefit more from instead buying an extra bunch of kale or blueberries instead.

No current data suggest that that general population should maintain a gluten-free lifestyle, but for those with a celiac disease, wheat allergy, or sensitivity diagnosis, gluten-free diets can be a life-saver.

The dramatic rise of allergic diseases, such as eczema and seasonal allergies, may be related to dietary exposure to endocrine-disrupting xenoestrogens, such as alkylphenol industrial pollutants.

In my video Preventing Childhood Allergies, I noted a study in Japan that found that “a higher maternal intake of meat during pregnancy was significantly associated with about three times the odds of both suspected and physician-diagnosed eczema”.  They suggest that, “certain components of meat may affect the fetal immune system”.  But, what about the moms themselves?

Seasonal allergies have exploded in Japan in the past few decades, starting with the first reported case in 1964, and now affecting millions every year.  We’ve seen a rising prevalence of allergic diseases around the industrialized world in past decades, but perhaps nothing quite this dramatic.  Researchers suggested profound changes in the Japanese diet may have played a role.  Over the latter half of the century, total meat, fish, and milk intake rose hundreds of percent in Japan.  So, researchers decided to look into dietary meat and fat intake and the prevalence of these seasonal pollen allergies.  No association with overall fat, but higher meat intake was associated significantly with an increased prevalence of disease.

So, maybe it was the saturated fat?  No, that didn’t seem to be it.  So, what other constituents in meat may be to blame?  Well, there are the cooked meat carcinogens, the heterocyclic amines, polycyclic aromatic hydrocarbons, and nitrosamines—but, who knows?

This new review, however, raised an intriguing possibility.  There’s a class of industrial pollutants, called alkylphenols, recognized as common toxic endocrine-disrupting chemicals that tend to accumulate in the human body and may be associated with the adverse effects of allergic diseases.  A variety of studies have shown how they may exacerbate allergen-induced inflammation, suggesting that alkylphenol exposure may influence the onset, progression, and severity of allergic diseases.  These toxic xenoestrogens can be found in human breast milk, stored up in our body fat, coursing through our urine, our bloodstream, and even in the umbilical cord blood going to our babies.  How did it get there?  How do people get exposed?  Through contaminated food.

It all goes back to a famous study about the reduction of penis size and testosterone levels in “alligators living in a contaminated environment.”  I don’t know what you all do for a day job, but these researchers observed that a population of juvenile alligators living in one lake in Florida exhibited a significantly smaller penis size and lower blood concentrations of testosterone, compared to animals on some different lake.  “The most important difference between the two lakes was that Lake Stubby was fed by relatively polluted waters.  They attributed the short penis phenomenon to estrogen-mimicking (xenoestrogenic) environmental metabolites of DDT that still pollute the earth”.  “This seminal work introduced the concept that endocrine disruptors, environmental xenoestrogens, might result in feminization of exposed male animals.”  And, that’s just the shriveled tip of the iceberg.

Since then, endocrine-disrupting chemicals have been implicated in the dramatic rise over the last fifty years of diseases like breast cancer, prostate cancer, testicular cancer, diabetes, obesity, decreased fertility, such as dropping normal sperm counts, not to mention genital birth defects, such as penile malformations, preterm birth, neurobehavioral disorders in children linked to thyroid disruption, and earlier breast development in young girls.

I try to make sufferers of seasonal allergies feel better by explaining that having an overactive immune system is not all bad.  Individuals with allergies “have a decreased risk for cancer compared with the general population”.  Yes, your immune system may be in such overdrive it’s attacking things left and right, like tree pollen, but that heightened state of alert might also help bring down some budding tumors in the body.  So, it’s tricky; we want to boost the part of the immune system that fights infection, while down-regulating the part that results in chronic inflammation–and mushrooms may fit the bill.

There are thousands of edible mushrooms, though only about 100 are cultivated commercially, and only 10 of those really on an industrial scale and, I do mean industrial, rising to over 20 million tons, and for good reason.  They accelerate immunoglobulin A secretion.  Let me explain.

Though skin is considered our largest organ, we actually interface with the outside world more through our mucous membranes that line our mouth, our entire digestive tract, our reproductive and urinary systems, inside the breast glands, on our eyeballs—occupying our largest body surface area.

Our gut alone covers more area than a tennis court, and much of it is only one cell thick.  One microscopic layer is all that separates us from all the toxins, viruses, and bacteria out there, and so we need one heck of a first-line defense and that defense is called IgA, immunoglobulin A.  Immunoglobulin means antibody.  These are our type A antibodies.  “Dietary intake may improve mucosal immunity by accelerating IgA secretion,” but no studies have ever been conducted on mushrooms—until now.

So, they had half the people eat their normal diet, half eat their normal diet plus cooked white button mushrooms every day for a week.  Then, using the “passive dribble” method for collecting saliva, they just measured the amount of IgA they were pumping out.  No change in the control group, but after a week of mushrooms, IgA secretion jumped 50%, and even stayed up there for a week after they stopped eating the mushrooms.

“This study has shown for the first time that a dietary intake of white button mushrooms—just regular white mushrooms, about a cup a day, resulted in higher IgA secretion” and the “elevated secretion remained stable into week 2,” but then fell back to baseline.  So, “this suggests that, in arresting or slowing the decrease of IgA in individuals such as the elderly or those with immune compromise, a continuous daily intake of mushrooms may be necessary to maintain an increased IgA secretion”—meaning you can’t just eat mushrooms once, and expect to be protected forever; you have to make them part of your regular diet.

To see any graphs, charts, graphics, images, or studies mentioned here, please go to the Nutrition Facts podcast landing page.  There, you’ll find all the detailed information you need plus links to all of the sources we cite for each of these topics.

Everything on the website is free.  There’s no ads, no corporate sponsorship.  It’s strictly non-commercial.  I’m not selling anything.  I put it up as a public service, as a labor of love, as a tribute to my grandmother, whose own life was saved with evidence-based nutrition.

We’ve Got a Lot of Nerves