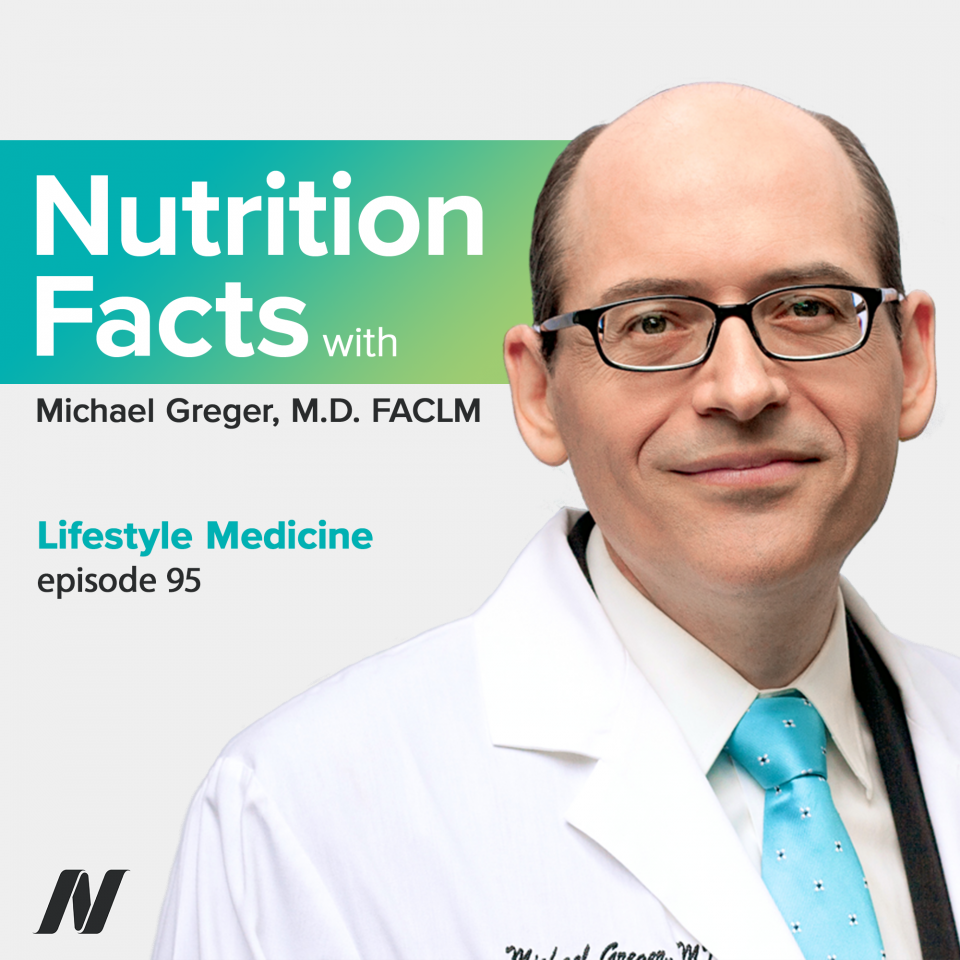 I know that the news today can be overwhelming, even just mentioning the word facts can trigger all sorts of reactions.  I’m Dr. Michael Greger and I happen to really like facts!  So, I’ve devoted my life to learning all there is to know about the latest nutrition research, so that you and your family can lead healthier, more productive lives.

On today’s show we explain and explore the concept of lifestyle medicine.

If doctors can eliminate some of our leading killers by treating the underlying cause of chronic disease better than nearly any other medical intervention, why don’t more doctors do it?

If people just did four simple things: not smoking, exercising a half hour a day, eating a diet that emphasizes whole plant foods, and not becoming obese, that may prevent most cases of diabetes and heart attacks, half of strokes, and a third of cancers.

Even modest changes may be more effective in reducing cardiovascular disease, high blood pressure, heart failure, stroke, cancer, diabetes, and all-cause mortality than almost any other medical intervention.  The key differences between conventional medicine and lifestyle medicine is instead of just treating risk factors, we treat the underlying causes of disease, as described in this landmark editorial.  See, typically doctors treat risk factors for disease, such as giving a lifetime’s worth of medications to lower high blood pressure, elevated blood sugar, high cholesterol. But think about it, high blood pressure is just a symptoms of diseased dysfunctional arteries.

Yes, you can artificially lower blood pressure with drugs, but that’s not treating the underlying cause, which often comes down to things like diet and exercise, the “penicillin” of lifestyle medicine.

Disregarding the underlying cause and treating only risk factors is somewhat like mopping up the floor around an overflowing sink instead of just turning off the faucet, which is why medications usually have to be taken for a lifetime.  If a floor is flooded as a result of a dripping tap, it is of little use to mop up the floor unless the tap is turned off.  The water from the tap represents the cause of disease, the flooded floor the diseases filling up our hospital beds—yet medical students learn far more about methods of floor mopping than about turning off taps and doctors who are specialists in mops and brushes can earn infinitely more money than those dedicated to shutting off taps.  And, the drug companies are more than happy to sell roles of paper towels so patients can buy a new role every day for the rest of their lives.  Paraphrasing Ogden Nash, “modern medicine is making great progress, but just headed in the wrong direction”.  Preventive medicine is, frankly, bad for business.

When the underlying lifestyle causes are addressed, patients often are able to stop taking medication or avoid surgery.  We spend billions cracking people’s chests open but only rarely does it actually prolong anyone’s life.  In contrast, how about wiping out at least 90% of heart disease?

Think about it.  Heart disease accounts for more premature deaths than any other illness and is almost completely preventable—simply by changing diet and lifestyle.  And, the same changes can prevent or reverse many other chronic diseases as well—the same dietary changes.  So, why don’t more doctors do it?  Well, one reason is doctors don’t get paid to do it.  No one profits from lifestyle medicine so it’s not part of medical education or practice.  Presently, physicians lack training and financial incentives, so they continue to do what they know how to do—prescribe medication and perform surgery.

After Dean Ornish proved you could reverse our number one cause of death—heart disease—open up arteries without drugs, without surgery, just with a plant-based diet and other healthy lifestyle changes, he thought that his studies would have a meaningful effect on the practice of mainstream cardiology.  After all, a cure for our number one killer? But, he admits he was mistaken.  Physician reimbursement, he realized, is a much more powerful determinant of medical practice than research: reimbursement more than research, salary over science, wealth versus health.  Not a very flattering portrayal of the healing profession but, hey, if doctors won’t do it without getting paid, let’s get them paid!

So, Dr. Ornish went to Washington, arguing that, look, if we train and pay for doctors to learn how to help patients address the real cause of disease with lifestyle medicine—not just treat disease risk factors—we could save trillions.  And, that’s just talking heart disease, diabetes, prostate and breast cancer.

The Take Back Your Health Act was introduced in the US Senate to induce doctors to learn and practice lifestyle medicine—not only because it works better, but here’s the critical factor: physicians will be paid to do it.  The bill died—just like the millions of Americans will continue to do with reversible chronic diseases.

Lifestyle modification is considered the foundation of diabetes prevention. What dietary strategies should be employed?  Let’s look at the science.

For people with prediabetes, lifestyle modification is now considered the cornerstone of diabetes prevention. Diet-wise, that means individuals with prediabetes, or diabetes, should aim to reduce their intake of excess calories, saturated fat, and trans fat.

Too many of us consume a diet with too many of these solid fats, as well as added sugars. Thankfully, the latest dietary guidelines aim to shift consumption towards more plant-based foods.

That’s based on research like this. We’ve known eating lots of whole grains is associated with a reduced risk of developing type 2 diabetes. This recent study took it further, demonstrating that whole grain consumption may also protect against prediabetes in the first place.

To help prevent diabetics from dying, recommendations should focus on the reduction of saturated fat, cholesterol, and trans fat intake (which is basically code for meat and dairy, eggs, and junk food), and increases in omega-3’s, soluble fiber, and phytosterols, all of which are found packaged in flax seeds, for example, an efficient but still uncommon intervention for prediabetes. They found that about 2 tablespoons of ground flax a day decreased insulin resistance, which is the hallmark of the disease.

So if the standards of care for all the major diabetes groups says that lifestyle is the preferred treatment for prediabetes because it’s so safe and highly effective, why don’t more doctors do it?

Unfortunately, the opportunity to treat this disease naturally is often unrecognized. Only about 1 in 3 patients report ever being told about diet or exercise. Possible reasons for not counseling patients include lack of reimbursement, lack of resources, lack of time, lack of skill. We’re just not teaching doctors how.

The inadequacy of clinical education is a consequence of the failure of health care and medical education to adapt to the great transformation of disease from acute to chronic—from broken legs to broken hearts. Chronic disease is now the principal cause of disability, consuming three quarters of our sickness-care system. Why has there been little academic response to the rising prevalence of chronic disease?

Maybe it’s because doctors aren’t getting paid to do it. Attempting to change to a rational chronic care model is practically unthinkable in the absence of radically changed compensation. Why haven’t reimbursement policies been modified? One crucial reason may be a failure of leadership in the medical profession and medical education to recognize and respond to this changing nature of disease patterns.

How far behind the times is the medical profession?  A report by the Institute of Medicine on medical training concluded that the fundamental approach to medical education has not changed since 1910.

In our final story, Dr. David Katz, the Director of Yale’s Prevention Research Center puts a face on the tragedy of millions suffering and dying from chronic diseases that could be prevented, treated, and reversed if doctors inspired lifestyle changes in their patients.

I talk a lot about numbers and statistics, but as the Director of Yale’s Prevention Research Center put it in a recent editorial, to reach doctors, our fellow colleagues, maybe we need to put a human face on it all.

“We have known…[for at least a decade] that the leading causes of both premature death and persistent misery in our society are chronic diseases that are, in turn, attributable to the use of our feet [exercise], forks (diet…), and fingers (…smoking). Feet, forks, and fingers are the master levels of medical destiny for not just thousands of people on any one occasion [like a tsunami or earthquake] but the medical destiny of millions upon millions year after year.

“We [as doctors, as a medical profession] have known,” [Ornish published 23 years ago] “but we have not managed to care. At least, not care deeply enough to turn what we know into what we routinely do. Were we to do so, we [might be able to] eliminate [most] heart disease,…strokes, …diabetes, and…cancer.”

But, saving millions of lives is just a number. He asks doctors to forget the bland statistics of public health, and ask ourselves if we love someone “who has suffered a heart attack, stroke, cancer, or diabetes….Now imagine their faces, whisper their names. Recall what it felt like to get the news. And while [we’re] at it, [we can] imagine the faces of other[s]…imagining beloved faces.”

“Now imagine if eight [out] of 10 of us wistfully reflecting on intimate love and loss, on personal anguish, never got that dreadful news because it never happened. Mom did not get cancer; dad did not have a heart attack; grandpa did not have a stroke; sister, brother, aunt, and uncle did not lose a limb or kidney or eyes to diabetes. We are all intimately linked, in a network of personal tragedy that need never have occurred.”

“Which leads to what [he’s] asking doctors to do about it: put a face on public health every chance you get. When talking about heart disease and its prevention—or cancer or diabetes—ask your audience to see in their mind’s eye the face of a loved one affected by that condition.” Then… imagine that loved one…among the 80% who need never have succumbed if what we knew [as doctors] were what we do.”  Invoke the mind’s eye, he advises, and then bring a tear to it.