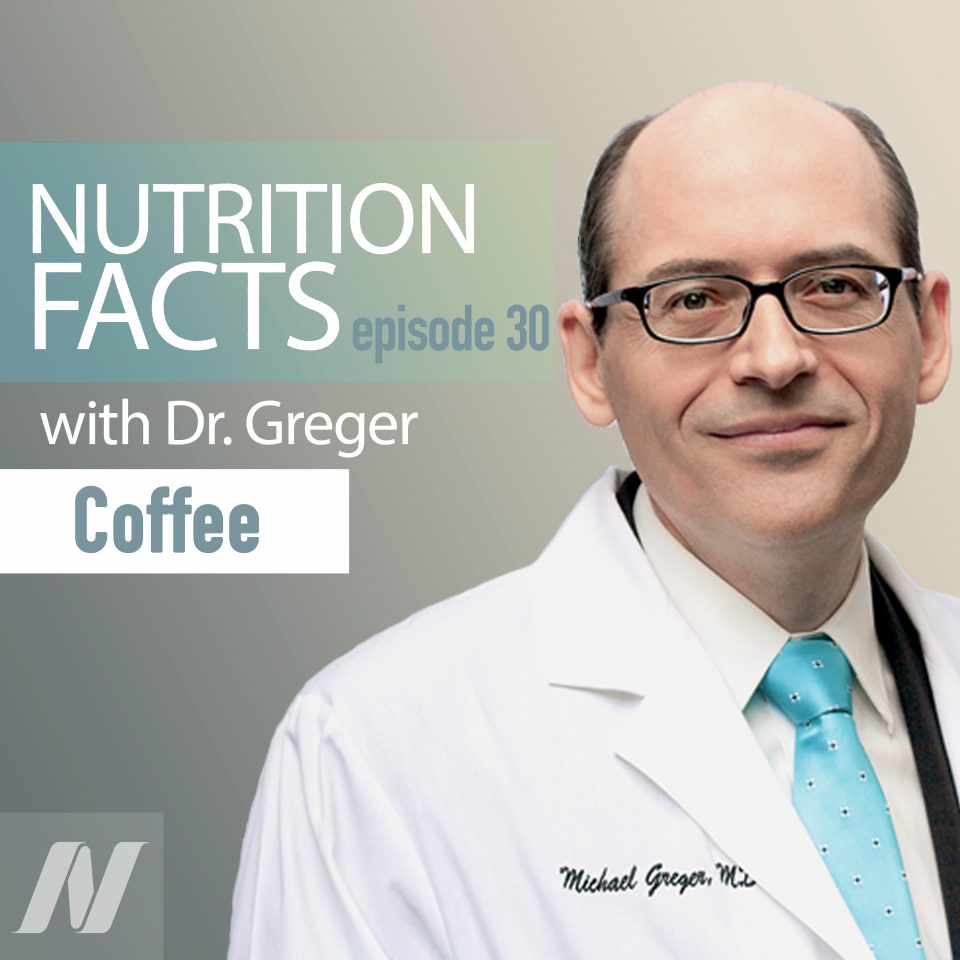 This episode features audio from Coffee & Mortality, Preventing Liver Cancer with Coffee, and What About the Caffeine?.

Welcome to Nutrition Facts.  I’m your host, Dr. Michael Greger, and I’m here to ask you, what is the most important decision you’ll make today, is it how you’ll get to work, who you’ll set up a meeting with, what friend you’ll call for lunch?  Well, as it turns out, probably the most important decision you’ll make today is what to eat.  What we eat on a day-to-day basis is the number one determinant of our health and longevity—literally.  Most premature deaths in the United States are preventable and related to nutrition.  So, we’re going to explore some smart nutrition choices based, naturally, on facts.  Here, we refer to the science, the research, the available data published in the peer-reviewed medical literature right now.  That’s why I wrote my book, How Not to Die, and why I created my nonprofit site NutritionFacts.org and, now, this podcast.

New dietary guidelines for beverages recommend tea and coffee second only to water in healthfulness, but what about concerns that coffee might impair the function of our endothelium–you know, that life-saving inner layer of our arteries in every vital organ of our body.

While unfiltered coffee tends to raise cholesterol levels, paper filtered coffee doesn’t as much; two cups a day might even increase the ability of our arteries to dilate.  Coffee consumption is associated with lower risk of diabetes, Alzheimer’s disease, depression, Parkinson’s disease, and chronic liver disease.

But what effect does coffee and tea consumption have on longevity, cancer risk, acid reflux, bone fractures, glaucoma, sleep quality, and atrial fibrillation or irregular heartbeat?  Here are some facts.

Do coffee drinkers live longer than non-coffee-drinkers?  Is it, “Wake up and smell the coffee or don’t wake up at all”?  The largest study ever conducted on diet and health put that question to the test, examining the association between coffee drinking and subsequent mortality among hundreds of thousands of older men and women in the United States and coffee drinkers won, though the effect was modest.  A 10 to 15% lower risk of death for those drinking six or more cups a day, specifically due to lower risk of dying from heart disease, respiratory disease, stroke, injuries and accidents, diabetes, and infections.  But, if you put all the studies together, bottom line, coffee consumption is associated with no change or a small reduction in mortality starting around one or two cups a day, for both men and women.

On a cup-by-cup basis, the risk of dying was 3% lower for each cup of coffee consumed daily, which all provides reassurance with respect to the concern that coffee drinking might adversely affect health–well, at least, longevity.  Health-wise though, a recent population study found no link between coffee consumption and symptoms of GERD, reflux disease, such as heartburn and regurgitation.  If you actually stick a tube down people’s throats and measure pH, coffee induces significant acid reflux, whereas tea does not.  Is it just because tea has less caffeine?  No.  If you reduce the caffeine content of coffee down to that of tea, it still causes significantly more acid reflux.  Decaf did cause less though, so GERD patients might want to choose decaffeinated or, even better, drink tea.

Coffee intake is also associated with urinary incontinence and so a decrease in caffeine intake should be discussed with women who have the condition, or men.  About two cups of coffee a day worth of caffeine may worsen urinary leakage in men as well.

There are certain populations in particular that may want to stay away from caffeine; for example, those with glaucoma, and possibly even those with a family history of glaucoma.

It goes without saying that people who have trouble sleeping might not want to imbibe.  Even just a single cup at night can cause a significant deterioration in sleep quality.  Then, there are case reports, for example, of individuals with epilepsy having fewer seizures after stopping coffee; so, I guess it’s worth a shot.

We used to think caffeine might increase the risk of an irregular heart rhythm called atrial fibrillation, but that too was based on anecdotal case reports, like this one of a young woman who suffered atrial fibrillation after chocolate intake abuse.  But these cases invariably involved the acute ingestion of very large quantities of caffeine.  As a result, though, the notion that caffeine ingestion may trigger abnormal heart rhythms had become ”common knowledge,” and this assumption led to changes in medical practice.  More recently, however, the pendulum has swung in the opposite direction.  Why?  Because we actually have data now:  Caffeine does not increase the risk of atrial fibrillation and low-dose caffeine, which they defined as less than about five cups a day, may even have a protective effect.  Tea consumption also appears to lower cardiovascular disease risk, especially when it comes to stroke.  However, given the proliferation of energy drinks that contain massive quantities of caffeine, one might want to temper any message that suggests caffeine is beneficial.  Seems a little patronizing, but it’s no joke.  Twelve highly caffeinated energy drinks within a few hours could be lethal.

Based on studies linking coffee consumption with lower liver cancer risk, coffee was put to the test to see if it can help reduce liver damage in those with hepatitis C.

Decades ago, a group of researchers in Norway came upon an unexpected finding.  Alcohol consumption was associated with liver inflammation—no surprise.  But, a strong protective association was found for coffee consumption.

These findings were replicated in the U.S. and around the world.  Those at risk for liver disease—those who drank a lot of alcohol or were overweight, and therefore at risk for fatty liver disease, appeared to cut their risk in half if they drank more than two cups of coffee a day.

Liver cancer is one of the most feared complications of liver inflammation.  “Hepatocellular carcinoma is the third leading cause of cancer death.  Furthermore, it has a rapidly rising incidence in the United States and Europe, largely driven by the burden of hepatitis C infection and fatty liver disease.”  Putting together all the best studies done to date, those drinking the most coffee had half the risk of liver cancer compared to those that drank the least.  Since this meta-analysis was published, a new study found that male smokers may be able to cut their risk of liver cancer more than 90% by drinking four or more cups of coffee a day.  Of course, they could have also stopped smoking.

It’s like if you look at heavy drinkers of alcohol, drinking more coffee may decrease liver inflammation—but not as much as drinking less alcohol.

“Liver cancers are among the most avoidable cancers—through hepatitis B vaccination, control of hepatitis C transmission, and reduction of alcohol drinking.  These three measures could, in principle, wipe out 90% of liver cancers worldwide.  It remains unclear whether coffee drinking has an additional role on top of that, but in any case such a role would be limited compared to preventing liver damage in the first place.”

What if we already have hep C, or are among the 30% of Americans with non-alcoholic fatty liver disease due to obesity—which may quadruple one’s risk of dying from liver cancer?

Well, coffee seems to help with hepatitis C, reducing liver damage, disease activity, and mortality.  It seems to help reduce the risk of developing liver cancer.  “Only the lack of randomized trials and interventional studies on the topic prevents us from considering the protective effect of coffee as fully ascertained.”  But we didn’t have such trials, until now.

A randomized controlled trial on the effects of coffee consumption in chronic hepatitis C.  “Forty patients with chronic hep C were randomized into two groups: the first consumed 4 cups of coffee a day for 30 days, while the second group remained coffee ‘abstinent.’”  And then, the groups switched for the second month.”  Now, two months is too soon to detect changes in cancer rates, but they were able to demonstrate that “coffee consumption reduces oxidative DNA damage, increases the death of virus-infected cells,” stabilizes the chromosomes, and reduces fibrosis, all of which could explain the role coffee appears to play “in reducing the risk of disease progression and of evolution to cancer”.

So, is it time to write a prescription for coffee for those at risk for liver disease?  Some say no.  “Although the results are promising, additional work is needed to identify which specific component of coffee is the contributing factor in reducing liver disease and related mortality.”  “There are more than 1000 compounds that could be responsible for its beneficial effects.”  That’s such a pharmacological worldview.  Why do we have to know exactly what it is in the coffee bean before we can start using it to help people?  Yes, more studies are needed but, “In the interim, moderate, daily, unsweetened coffee ingestion is a reasonable adjunct to therapy for people at high risk, such as those with fatty disease.”

Yes, daily consumption of caffeinated beverages can lead to physical dependence.  Caffeine withdrawal symptoms can include days of headaches, fatigue, difficulty with concentration, and mood disturbances.  But, this dependence could be a good thing.  “The tendency for coffee to promote habitual daily consumption may ultimately turn out to be advantageous if its myriad potential health benefits are confirmed.”

Caffeine itself can have positive cognitive and physiological effects at moderate doses.

Yes, coffee may reduce cancer risk, but what about the caffeine?  Oh, you mean the substance that increases energy availability and expenditure, decreases fatigue and the sense of effort associated with physical activity, enhances physical, motor, and cognitive performance, increases alertness, wakefulness, and feelings of energy, decreases mental fatigue, quickens reactions, increases their accuracy, increases the ability to concentrate and focus attention, enhances short-term memory, the ability to solve problems, the ability to make correct decisions, enhancing cognitive functioning capacities and neuromuscular coordination, and, in otherwise healthy, non-pregnant adults, is safe.  That caffeine?

The non-pregnant is an important caveat, though.  New advice has been issued to restrict caffeine intake in pregnancy to under just 200 milligrams a day.

Everything on the website is free.  There’s no ads, no corporate sponsorship.  It’s strictly non-commercial.  I’m not selling anything.  I put it up as a public service, as a labor of love, as a tribute to my grandmother, whose own life was saved with evidence-based nutrition.

It's Heavy: The Backstory on Lead