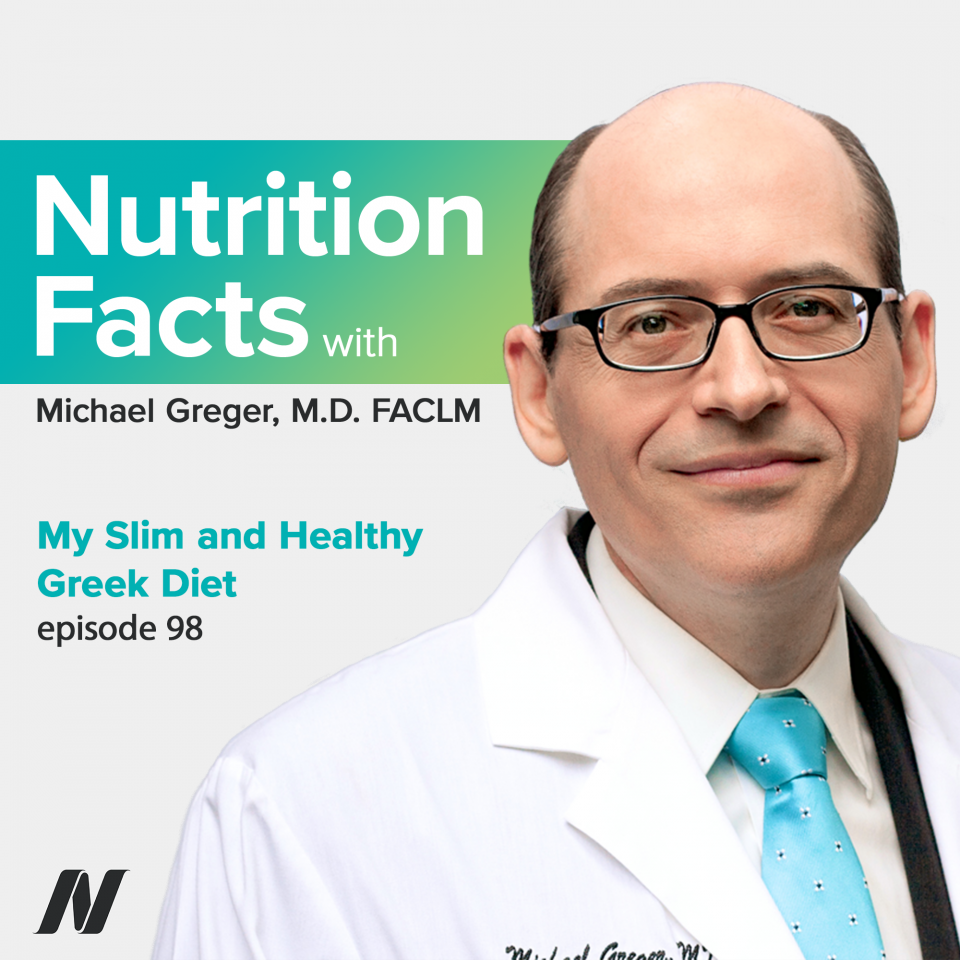 It’s time to be transported to the Greek Isles. What does the science say about the Mediterranean-type diet?

Today on the show we transport ourselves to the Greek islands, where at least the food used to be good for you. What was it about the diet on the Greek isle of Crete in the 1950s that made it so healthy?

“The Mediterranean Diet is an “in” topic nowadays in both the medical literature and the lay media”: 450 papers published in the medical literature over just the last year alone–more than one a day. “Uncritical laudatory coverage” is common, but specifics are hard to come by. What is it? Where did it come from? Why is it good? “Merits are rarely detailed; possible downsides are never mentioned.” So, let’s dig in.

After World War II, the government of Greece asked the Rockefeller Foundation to come in and assess the situation. Impressed by the low rates of heart disease in the region, nutrition scientist Ancel Keys, after which K-rations were named, initiated his famous Seven Countries Study, in which he found the rate of fatal heart disease on the Greek isle of Crete was 20 times lower than that in the United States. They also had the lowest cancer rates and fewest deaths overall. What were they eating? Their diets were more than 90% plant-based, which may explain why coronary heart disease was such a rarity. A rarity, that is, except for a “small class of rich people whose diet differed from that of the general population: they ate meat every day instead of every week or two.”

So, the heart of the Mediterranean diet is mainly vegetarian, much lower in meat and dairy–which Keys considered the major villains in the diet because of their saturated fat content.

Unfortunately, no one is really eating the traditional Mediterranean diet anymore–even in the Mediterranean. The prevalence of coronary heart disease skyrocketed by an order of magnitude within a few decades in Crete, blamed on the increased consumption of meat and cheese at the expense of plant foods.

So, if no one’s really eating this way anymore, how do you study it? Researchers came up with a variety of Mediterranean diet adherence scoring systems to see if people who are eating more Mediterranean-ish do better. You get maximum points the more plant foods you eat, but effectively get points deducted eating just a single serving of meat or dairy a day. So, no surprise that those that eat relatively higher on the scale have a lower risk of heart disease, lower risk of cancer, and lower risk of death overall. After all, “the Mediterranean diet can be considered to be a near-vegetarian diet. As such, it should be expected to produce the well-established health benefits of vegetarian diets.” So, less heart disease, cancer, and death and less inflammation, improved arterial function, a lower risk of developing type 2 diabetes, and a reduced risk for stroke, depression, and cognitive impairment.

The Mediterranean diet is protective compared to the Standard American Diet—no question. But any diet rich in whole plant foods and low in animal fat consumption could be expected to confer protection against many of our leading killers.

A randomized controlled trial found that a Mediterranean-type diet can dramatically lower the risk of subsequent heart attacks. How does it compare with plant-based diet data?

Recent studies have shown that higher Mediterranean diet adherence scores are associated with a significant reduction of risk of death, heart disease, cancer and brain disease. But the problem with population studies like these is that people who eat healthier may also live healthier, and so how do we know it’s their diet?

As the American Heart Association position states: “Before advising people to follow a Mediterranean diet, we need more studies to find out whether the diet itself or other lifestyle factors account for the lower deaths from heart disease.” How do you do that? Well there are ways you can control for obvious things like smoking and exercise, which many studies did, but ideally you’d do an interventional trial, the gold standard of nutritional science. Take people, change their diet, while trying to keep everything else the same, and see what happens. And that’s what we got 20 years ago, the famous Lyon Diet Heart Study. About 600 folks who had just had their first heart attack were randomized into two groups. The control group got no dietary advice, apart from whatever their doctors were telling them, but the experimental group was told to eat more of a Mediterranean-type diet, supplemented with a canola-oil based spread to give them the plant-based omega-3s they’d normally be getting from eating weeds and walnuts if they actually lived on a Greek isle in the 1950s.

The Mediterranean diet group did end up taking some of the dietary advice to heart. They ate more bread, more fruit, less deli meat, less meat in general, and less butter and cream, but other than that no significant changes in diet reported in terms of wine, olive oil, or fish consumption. So less saturated fat and cholesterol, more plant-based omega 3s, but not huge dietary changes. But at the end of about four years, in the control group, 44 individuals had a second heart attack, either fatal or nonfatal, but only 14 suffered another attack in the group that changed their diet. So they went from having like a 4% chance of having a heart attack every year, down to like 1%.

Now a cynic might say yes, less death and disease, but the Mediterranean diet continued to feed their heart disease, so much so that 14 of them suffered new heart attacks while on the diet. Now their disease progressed a lot less than the regular diet group, about four times less, but what if there was a diet that could stop or reverse the disease?

Dr. Caldwell Esselstyn and colleagues at the Cleveland Clinic recently published a case series of 198 consecutive patients with cardiovascular disease counseled to switch to a diet composed entirely of whole plant foods. Of the 198, 177 stuck to the diet, whereas the other 21 fell off the wagon, setting up kind of a natural experiment. What happened to the 21? This was such a sick group of patients that more than half suffered from a fatal heart attack, or needed angioplasty, or a heart transplant. In that same time period of about four years, of the 177 that stuck to the plant-based diet only one had a major event as a result of worsening disease. Not half, but less than 1%.

As Dean Ornish noted in his response to the latest Mediterranean trial, “A Mediterranean diet is better than what most people are consuming; but, even better may be a diet based on whole foods and plants.”

Now this was not a randomized trial, so it can’t directly be compared to the Lyon study, and included very determined patients. Not everyone is willing to dramatically change their diets, even if it may literally be a matter of life or death. In which case, rather than doing nothing, eating a more Mediterranean-type diet may cut risk for heart attack survivors by about two-thirds. Cutting 99% of risk would be better, if Esselstyn’s results were replicated in a controlled trial, but even a 70% drop in risk could save tens of thousands of lives every year.

What are the four problematic nutritional aspects of plant-based Mediterranean diets? Let’s see how it can be improved:

The traditional Mediterranean diet can be considered as a mainly, but not exclusively, plant-based diet, and certainly not a whole food plant-based diet, as olive oil and wine can be considered essentially fruit juices. Even if one is eating a vegiterranean diet, an entirely plant-based version, there are a number of potentially problematic nutritional aspects that are rarely talked about. For example, lots of white bread, white pasta, not a lot of whole grains. Alcohol can be a problem, the caloric density with all that oil can be high, as well as the salt intake. Let’s go over these one by one.

In this anatomy of the health effects of the Mediterranean diet, while the single most important component was the high consumption of plant foods, in contrast, high cereal consumption, meaning high grain consumption, did not appear to help.  This may be because most grains modern Mediterranean dieters eat are refined, like white bread, whereas the traditional Mediterranean diet was characterized by unprocessed cereals—in other words, whole grains. And while whole grains have been associated with a lower risk of diabetes, heart disease, and cancer, refined grains may increase the risk of diabetes, obesity, heart disease, and other chronic diseases. For example, in the PREDIMED study, those who ate the most white bread–but not whole grain bread–gained significant weight.

The wonderful grape phytonutrients in red wine can improve our arterial function such that if you drink de-alcoholized red wine, red wine with the alcohol removed, you get a significant boost in endothelial function–the ability of our arteries to relax and dilate normally, increasing blood flow. But if you drink the same red wine with the alcohol added back in, it abolishes the beneficial effect; it counteracts the benefit of the grape phytonutrients. So better just to eat grapes.

Similarly, there are components of olives—the antioxidant phytonutrients–that may help endothelial function, but when consumed as oil, even extra virgin olive oil, may impair arterial function. So, even if white bread dipped in olive oil is the very symbol of the Mediterranean diet, we can modernize it by removing oils and refined grains.

Another important, albeit frequently ignored, issue in the modern Mediterranean diet is sodium intake. Despite evidence linking salt intake to high blood pressure, heart disease, and strokes, dietary salt intake in the U.S. is on the rise. Right now we get about seven to ten grams a day, mostly from processed foods. If we were to decrease that just by three grams, which is about 1,000 mg of sodium, half a teaspoon of table salt, every year we could save tens of thousands of people from having a heart attack, prevent tens of thousands of strokes, and tens of thousands of deaths. There is a common misconception that only certain people should reduce their salt intake, and that for the vast majority of the population, salt reduction is unnecessary. But in reality, the opposite is true.

To see any graphs, charts, graphics, images or studies mentioned here, please go to the Nutrition Facts podcast landing page. There, you’ll find all the detailed information you need – plus links to all the sources we cite for each of these topics.