Paleolithic diets are currently the rage, attracting athletes, dieters, and health seekers of all stripes. The basic premise of the so-called “paleo” diet is simple—the diet humans ate in preagricultural, Paleolithic times is best suited for human health. Whether or not what these relatively short-lived humans ate is what’s optimal for the health of today’s relatively long-lived humans is a matter of considerable debate. Preagricultural diets—which essentially consisted of wild plants, wild animals, and wild fish—varied considerably, depending on location, season, hunting and gathering skills, available tools, and so on. People didn’t consume oil, sugar, or salt; anything from a box or bag, or the milk of other mammals. Today’s new paleo devotees attempt to copy this diet by eating meat, poultry, fish, eggs, vegetables, fruits, nuts, and seeds and avoiding processed foods, grains, legumes, and dairy products. Followers of the new paleo diet naturally assume that their nutrient intakes approximate that of Paleolithic humans, but their actual intakes may be wide of the mark. Nutritional anthropologists have been estimating the nutrient intakes of cavemen for several decades. As it turns out, vegan diets may actually come closer to matching the macro- and micronutrient intakes of Paleolithic diets than new paleo diets. The table below summarizes the results of a comparison among recommended paleo menus, recommended plant-based menus, and a true Paleolithic diet eaten by early humans. The data compare three days of recommended paleo menus from a popular paleo website, three days of recommended plant-based (vegan) menus from Becoming Vegan: Comprehensive Edition, and the estimated average daily intakes of Paleolithic people. The table also provides dietary reference intakes (DRIs) for adult males (M) and adult females (F) who aren’t pregnant or lactating. Nutrients and other dietary factors in the new paleo or vegan diet that are more similar to the true Paleolithic diet are highlighted (pink for the new paleo diet and green for the vegan diet). 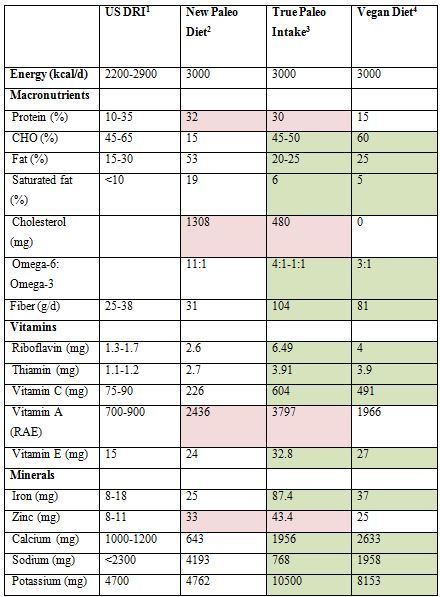 The comparison shows that this recommended new paleo menu supplies protein, vitamin A, and zinc in amounts closer to a true Paleolithic diet than do the vegan menus. However, its fat and saturated fat levels are about double, cholesterol almost triple, and sodium five times as much as that of a true Paleolithic diet. In addition, the new paleo menu contains about a third of the carbohydrates, and half the vitamin C, calcium, and fiber of true Paleolithic diets. Even the 100 percent plant-based menus deliver fiber in amounts at the lowest end of the estimated Paleolithic intake range; clearly our preagricultural ancestors ate plenty of plants (the only source of fiber). The vegan menus do provide intakes of carbohydrate, fat, saturated fat, fiber, riboflavin, thiamin, vitamin C, vitamin E, iron, calcium, sodium, and potassium that are closer to the levels supplied by a true Paleolithic diet than do the new paleo menus. Why are new paleo diets and the true Paleolithic diet so far apart nutritionally? The answer lies in the differences between the meat and vegetables consumed today and those eaten in the Paleolithic era. The wild animals eaten then provided an estimated 6 to 16 percent of calories from fat compared to about 40 to 60 percent in today’s domestic animals—even those that are grass-fed. They were also free of added hormones, antibiotics, and environmental contaminants. All animal organs were consumed, and insects provided significant amounts of protein. In addition, virtually all fruits and vegetables available in supermarkets are more palatable, more digestible, and easier to store and transport than their wild cousins, at the expense of valuable protective dietary components. Wild or uncultivated plants provide about four times the fiber of commercial plants (13.3 grams of fiber per 100 grams versus 4.2 grams of fiber per 100 grams, respectively).4 Certainly, there are some benefits to switching from a standard Western diet to a paleo-type diet—highly processed foods, refined carbohydrates, fried foods, and fast foods are eliminated, and fresh fruits, vegetables, nuts, and seeds are encouraged. On the other hand, today’s paleo eaters tend to include more meat than did early humans, ignoring the impressive evidence linking meat consumption to risk of chronic disease. Grains and legumes are dispensed with, even though these foods have a long and impressive track record as valuable sources of calories and protein for the world’s population. The value of legumes and grains in the human diet is validated by people of the Blue Zones – the longest lived, healthiest populations in the world – all of whom consume legumes and grains as part of their traditional fare. Modern paleo advocates claim that these foods weren’t part of Paleolithic-era diets, but new research challenges that assumption.5 They also argue that lectins naturally present in these starchy foods are harmful to human health. Consuming too many lectins can cause significant gastrointestinal distress. However, because legumes and grains are almost always consumed in a cooked form—and lectins are destroyed during cooking—eating beans and grains doesn’t result in lectin overload. Sprouting also reduces lectin levels in plants, although not as effectively as cooking. Generally, pea sprouts, lentil sprouts, and mung bean sprouts are safe to consume, as are sprouted grains, which are naturally low in lectins. Most larger legumes contain higher amounts and should be cooked. The Bottom Line: With its focus on consuming large quantities of meat, the new paleo diet is a pale imitation of the diet of early humans. Unfortunately, this dietary pattern also ignores the numerous health risks associated with eating meat, the ethical issues associated with an increased demand for food animals, and the looming environmental crisis that makes eating lower on the food chain an ecological imperative. People who want to move closer to a true Paleolithic diet should explore plant-based diets—such diets come as close to true paleo diets as modern day people can hope to achieve. References

Brenda Davis (right) is a leader in her field, an esteemed, popular speaker, a member of the Vegetarian Hall of Fame, and a past chairperson of the Vegetarian Nutrition Dietetic Practice Group of the Academy of Nutrition and Dietetics (formerly the American Dietetic Association). She lives in Kelowna, British Columbia, with her husband, Paul. Vesanto Melina (left) is a sought-after speaker and consultant; she has taught nutrition at the University of British Columbia and Bastyr University in Seattle and is consultant to the government of B. C. She coauthored the joint position paper on vegetarian diets for the American Dietetic Association and Dietitians of Canada. She lives in Langley, BC with her partner Cam Doré. They are the coauthors of  14 books, 7 jointly. These books include their latest releases, Becoming Vegan: Comprehensive Edition (2014) and Becoming Vegan: Express Edition (2013), and the popular favorites, Becoming Raw, The New Becoming Vegetarian, Becoming Vegetarian, Becoming Vegan, and The Raw Food Revolution Diet. Brenda also is co-author of Defeating Diabetes and of Dairy-Free and Delicious. Vesanto is co-author of Cooking Vegan, Cooking Vegetarian, Raising Vegetarian Children, Food Allergies: Health and Healing, and the Food Allergy Survival Guide. Their books have been translated into 9 languages and have sold over 650,000 copies.