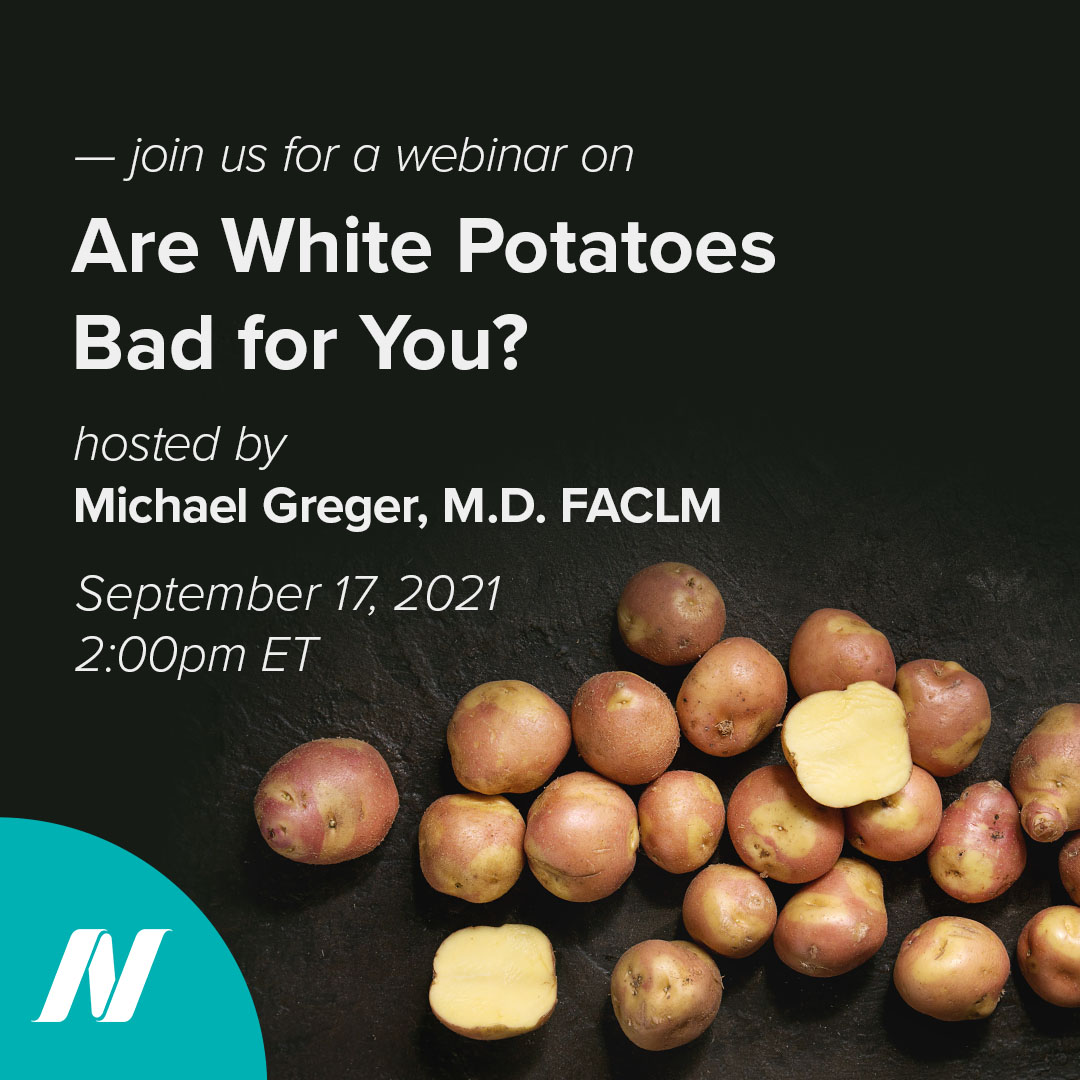 Greater potato consumption is associated with a greater risk of coming down with type 2 diabetes, but of the hundred or so pounds of potatoes Americans eat every year, most are in the deep-fried form of French fries and potato chips. But even baked, boiled, or mashed potatoes seem to carry a small increased risk even after taking all the butter and sour cream into account. The reason that potato consumption may just have a neutral impact on mortality risk (as opposed to other whole plant foods–beans, nuts, vegetables, and fruits–that are linked to a longer life) is that all the fiber and vitamin C and potassium in white potatoes might be counterbalanced by the detrimental effects of their high glycemic index. By chilling and reheating potatoes, and adding vinegar or lemon juice you can dramatically lower the glycemic impact. I’ll also cover the best kinds of potatoes, address concerns about toxic glycoalkaloid compounds in the peel, and answer any questions you may have in this 1-hour live webinar on September 17th. 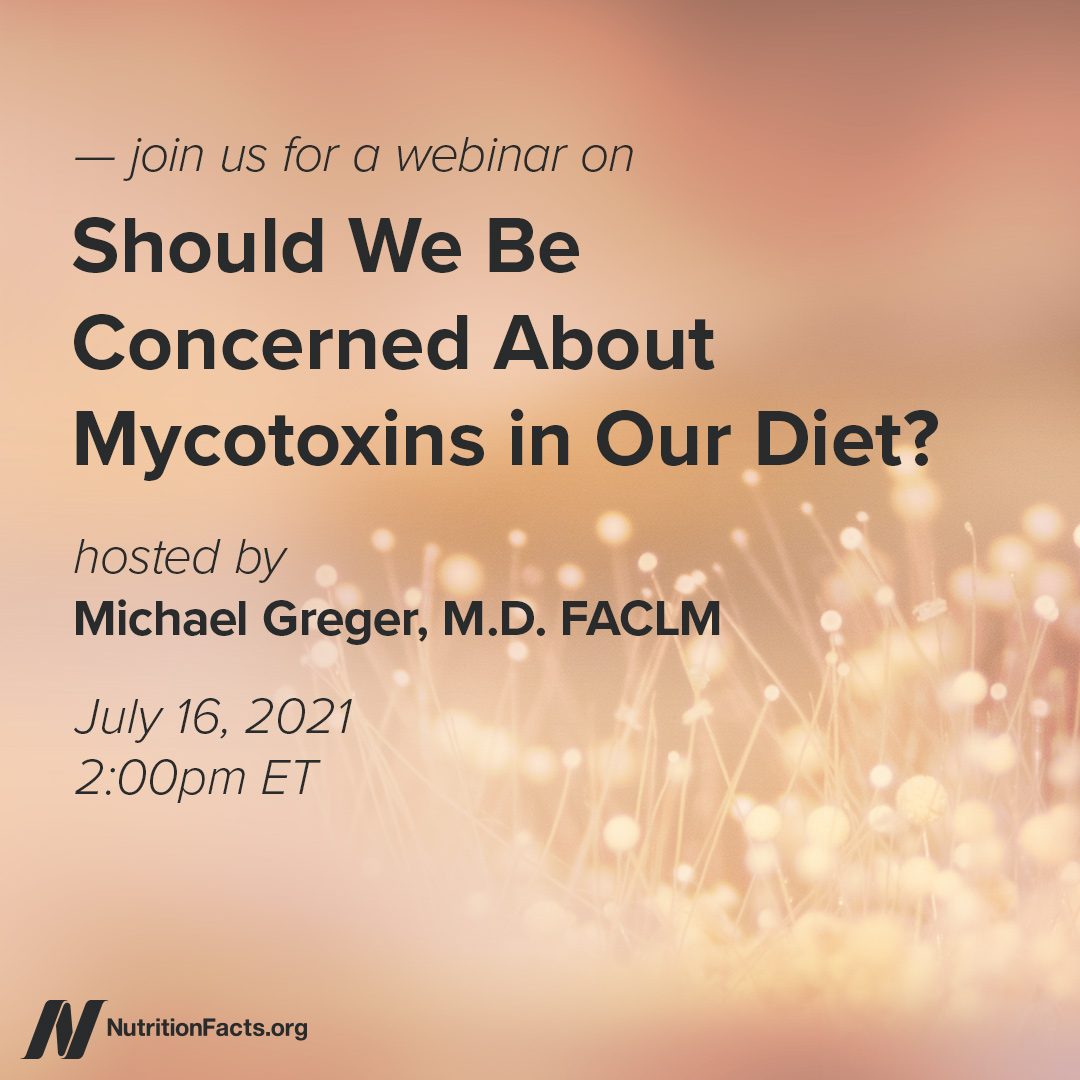 Mycotoxins—fungal toxins found in moldy food—are one of the few dietary contaminants suspected to have a higher presence in plant-based diets, though in some population studies 100% of blood samples turn up positive. Are there some foods we should try to avoid to decrease our exposure, such as oat-based breakfast cereals for ochratoxin or dried figs for aflatoxin? Dr. Greger takes a deep dive into everything you ever wanted to know about mycotoxins but were afraid to ask in this 1-hour webinar and live Q&A. 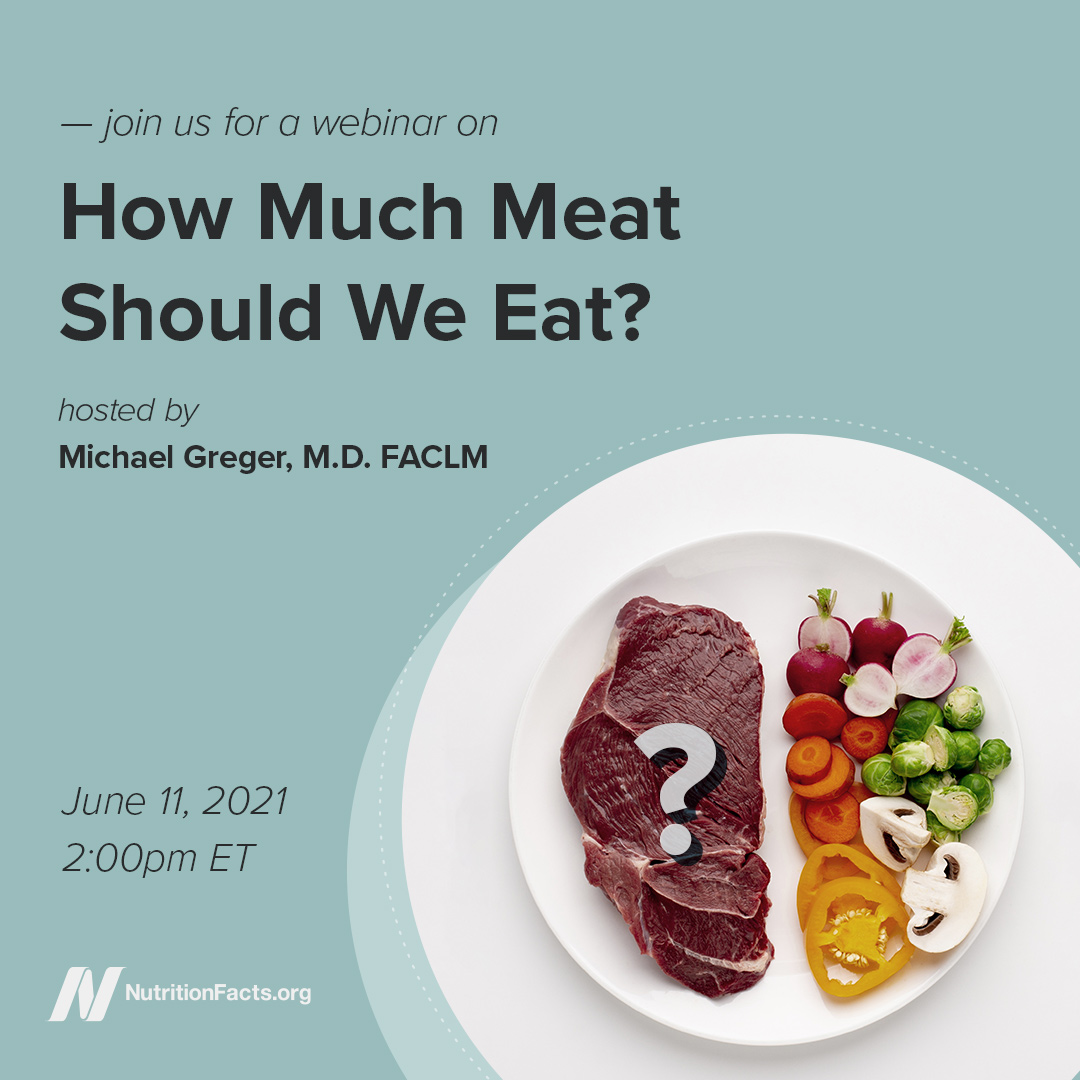 In late 2019 a series of reviews were published in the Annals of Internal Medicine that concluded the same thing that past reviews have concluded: reduced meat intake is associated with a decreased risk for premature death, cardiometabolic disease, and mortality, meaning the risk of getting and dying of diseases like heart disease and type 2 diabetes, as well as the risk of getting cancer and dying from cancer. Therefore, they concluded that people should keep eating red and processed meat. Wait, what?! Yeah, premature death, cancer, heart disease, diabetes, but keep eating your burgers and bacon. How were they able to pull that off? In this live two-hour webinar I’ll explore how Big Meat and Big Sugar have followed in the footsteps of Big Tobacco to warp the scientific literature. I’ll also explain how much meat is expected to shorten your life expectancy compared to other lifestyle behaviors such as smoking. 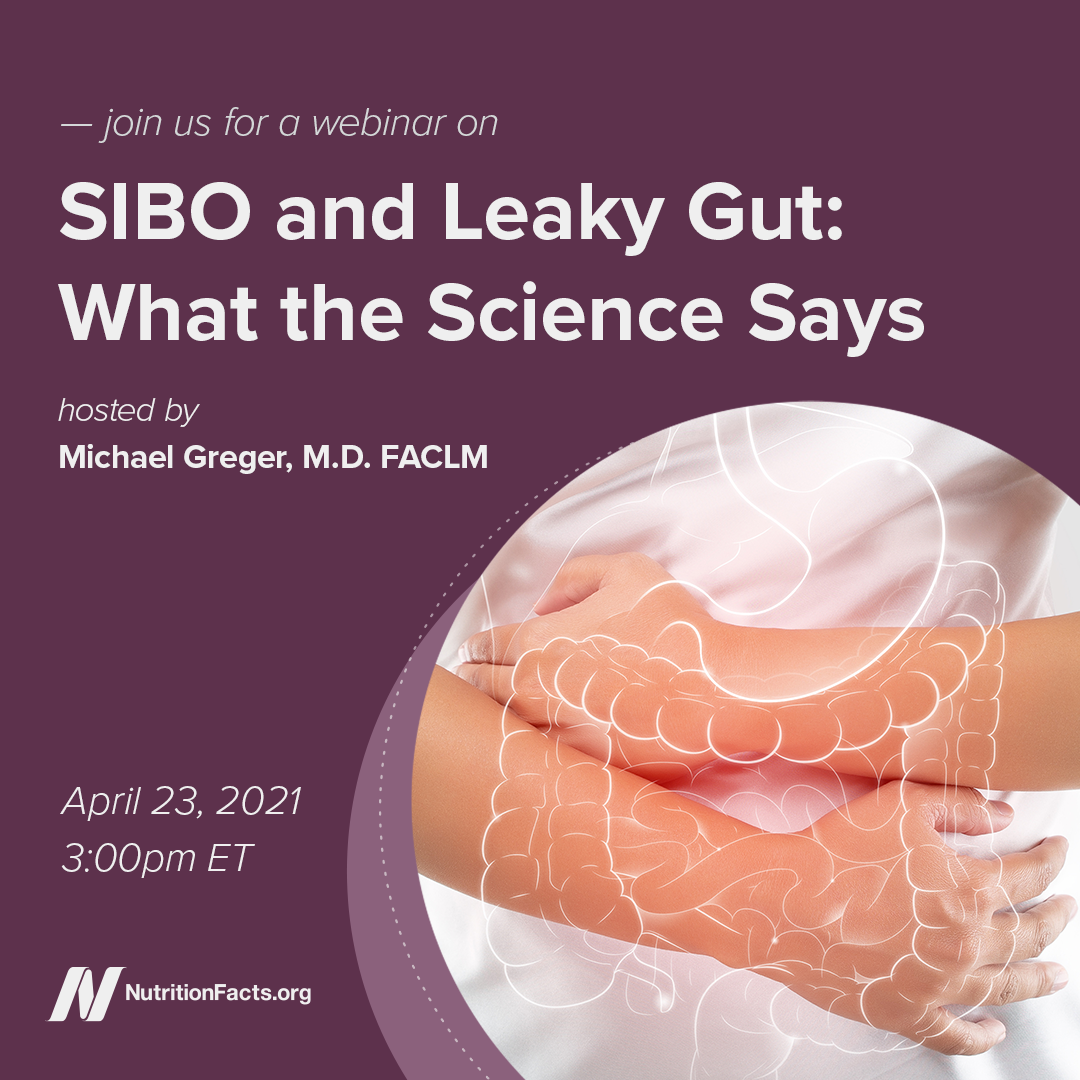 Gastrointestinal symptoms like abdominal pain and bloating account for millions of doctor visits every year. One of the conditions that may be considered for such a nonspecific presentation of symptoms is SIBO, small intestinal bacterial overgrowth, a concept that has gained popularity on the internet. Is SIBO a real disorder? Are the breath tests that used to diagnose it bogus? Is the problem not so much overgrowth, but dysbiosis, the growth of the wrong bacteria? In that case, should you eat a low-FODMAP diet or a high fiber diet? Another purported intestinal disorder that’s shrouded in controversy is leaky gut. I’ll cover what exactly intestinal permeability is, what it isn’t, how to prevent it and how you can heal it with diet. 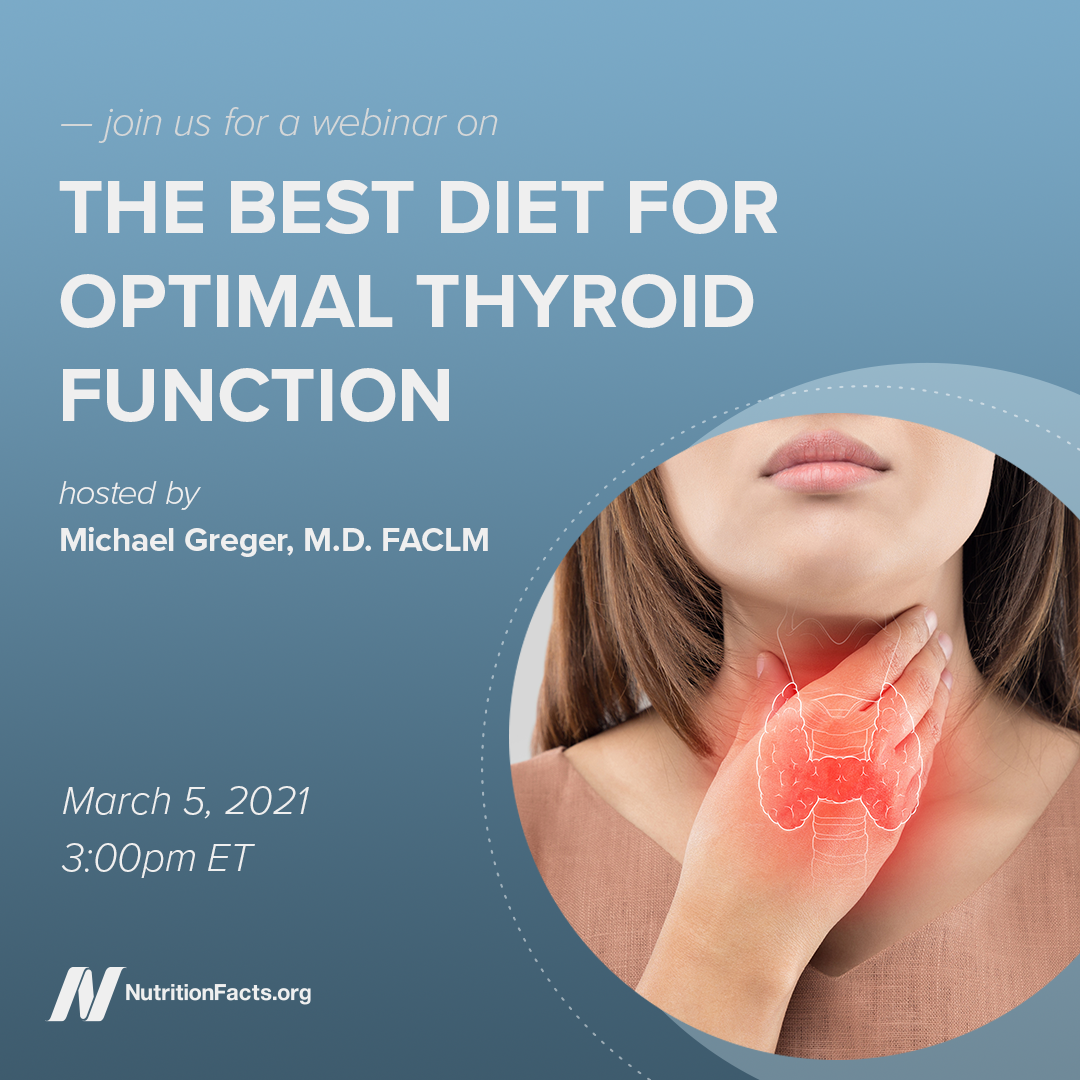 One of the most common questions I’m asked is for a natural treatment for Hashimoto’s disease, also known as autoimmune thyroiditis, the leading cause of hypothyroidism. And I’m excited to say I found one! I’ll be covering the best diet for both hypothyroidism and hyperthyroidism, as well as the healthiest natural source of iodine I recommend.

All of these videos will be eventually up on NutritionFacts.org over the next year but you can see them all and get your questions answered by joining me at 3 pm ET on March 5th for this one-hour live webinar event. 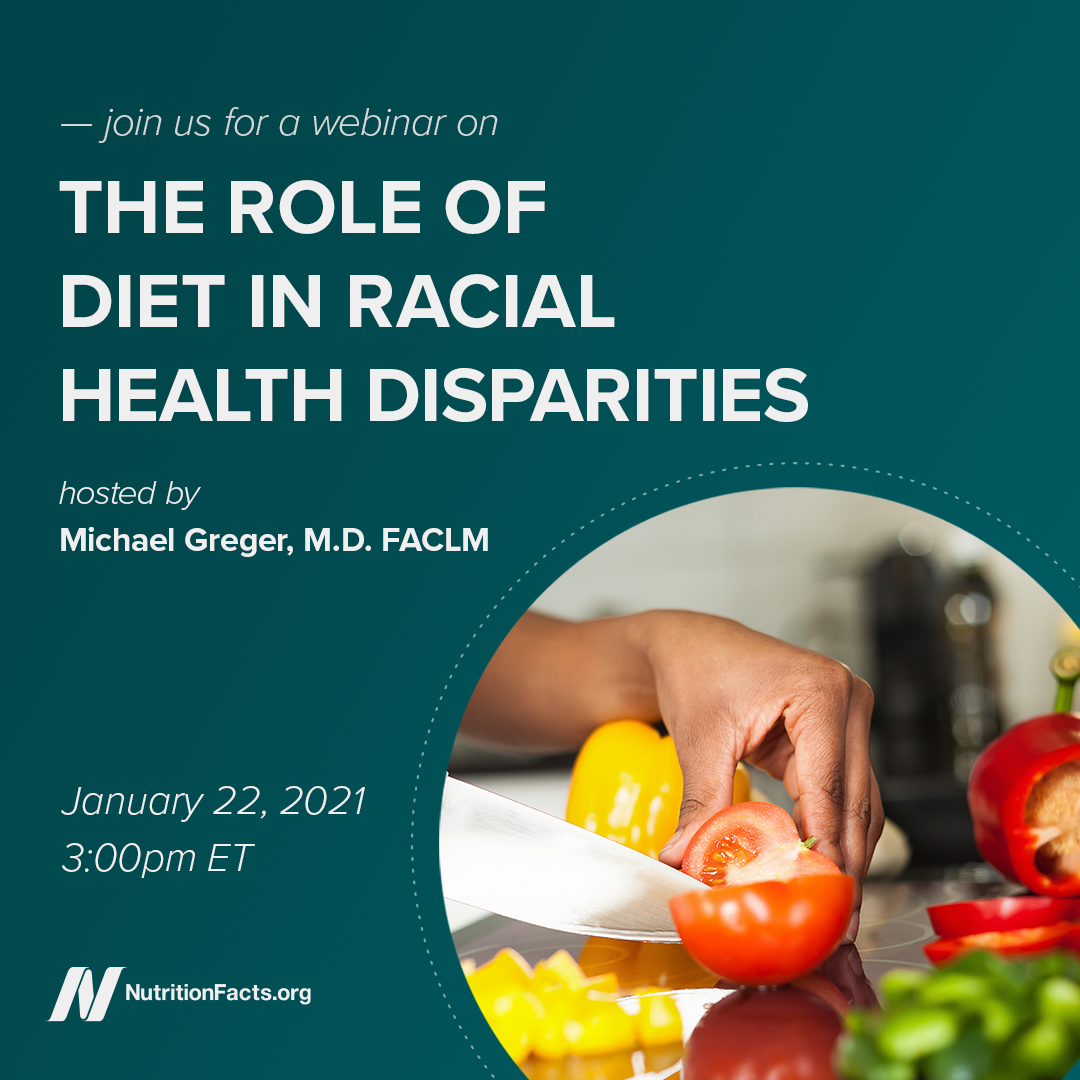 With death rates as much as 6 times higher in Black America than white America,  COVID-19 pointed a glaring spotlight at racial health disparities in the United States. In my upcoming hour-long live webinar I’ll address the question of why Black Americans live sicker and die younger than their white counterparts way before the pandemic started. Even with the same education and socioeconomic resources, Black Americans suffer disproportionately from chronic disease.

What role may dietary patterns be playing and what happens when you feed people soul food that’s good for the soul and put plant-based diets to the test?

Outside of an emergency setting, there appear to be zero benefits to angioplasty and stents. Stents don’t prevent heart attacks, they don’t extend your life, and based on sham “placebo” surgery trials where they cut into you but don’t actually place a stent, they don’t even help with symptoms! But wait, that would mean hundreds of thousands of people are exposed to the risks of these operations for nothing? How do the doctors justify it? How do they get patients to sign up for it? And wait, why doesn’t it work if in fact, you’re opening up a blocked artery? These are some of the questions I’m going to be addressing in my live 2.5-hour webinar on October 14th at 3pm ET. 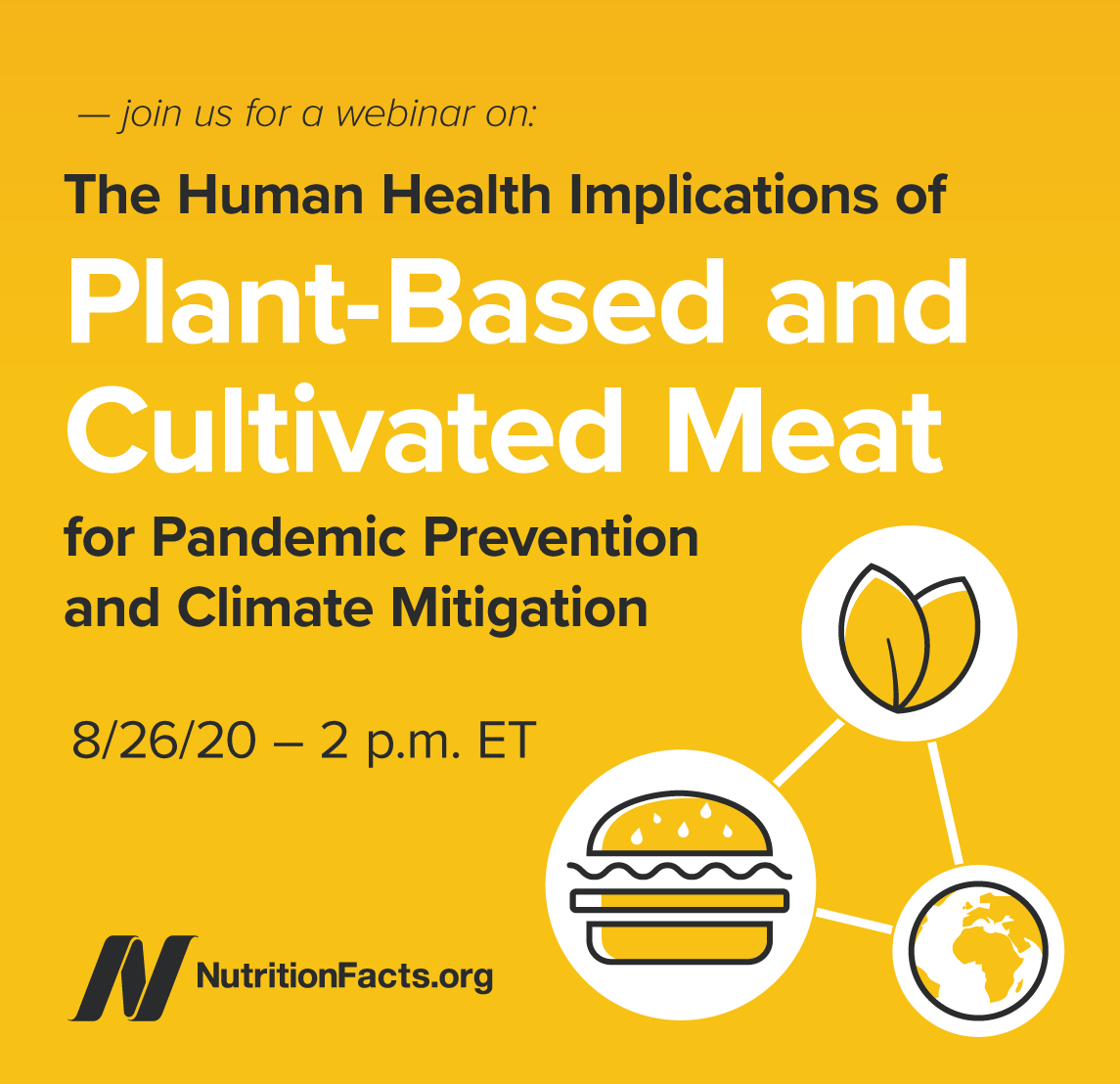 In Dr. Greger’s new book How to Survive a Pandemic and our last COVID-19 Webinar, he marveled at the constellation of new consumer choices in the dairy and meat aisle helping to innovate us out of our precarious situation with regards to the pandemic threats posed by animal agriculture. Plant-based meats, milks, and egg products—as well as even more pioneering approaches involving cellular agriculture—could also offer enormous benefits for the climate crisis. But what are the nutritional and personal human health effects of eating products like Beyond Meat and the Impossible Burger, or even actual animal products are grown without the animals? 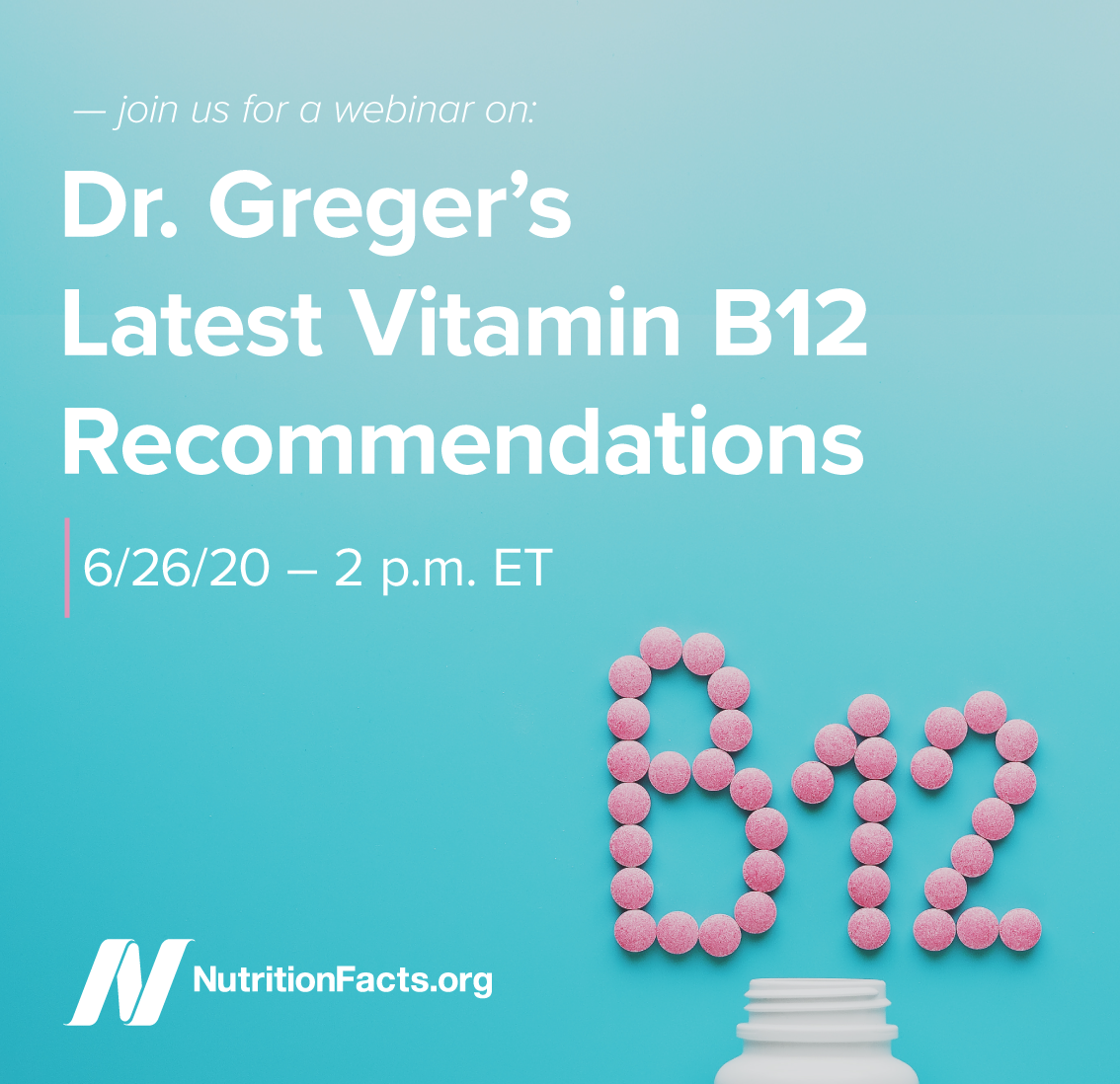 This 1.5-hour live webinar explained the rationale for Dr. Greger’s new vitamin B12 recommendations. He discussed the symptoms of B12 deficiency and explained how he arrived at what he considers the optimal dose of vitamin B12 supplements in children, adults, the elderly, and during pregnancy. He clarified why cyanocobalamin (not methylcobalamin) is the best type of vitamin B12 supplement and addressed the data suggesting B12 supplements cause acne, bone fractures, and lung cancer. He also covered the healthiest food sources of B12 for those that don’t want to take supplements. 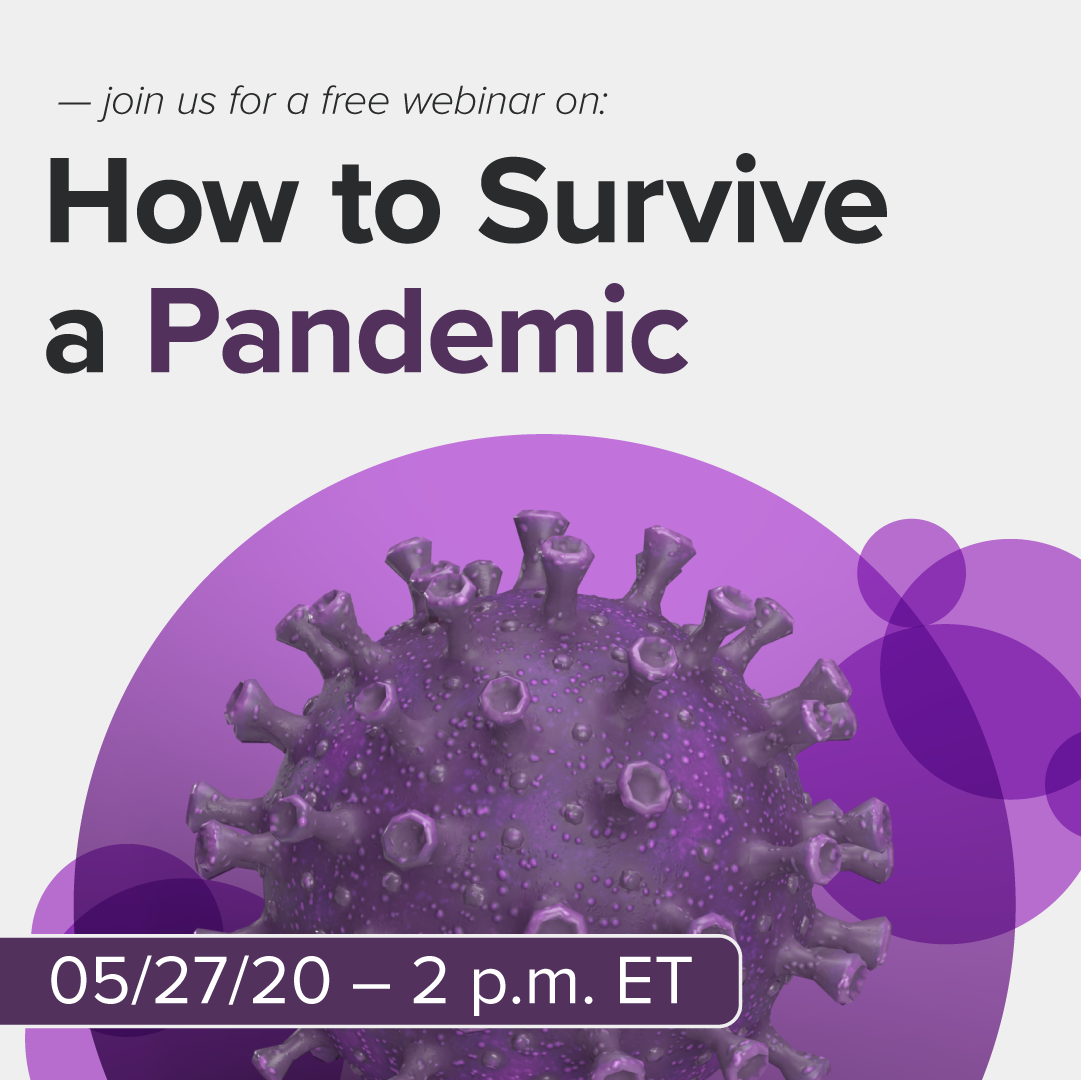 In his 4-hour webinar on COVID-19 last month, Dr. Greger covered how we can best keep ourselves and our families safe from the coronavirus. He offered tips for optimal respiratory and hand hygiene, surface disinfection, proper mask usage, how to make his DIY sanitizer solution, sheltering-in-place, and what to do if you come down with the disease. Dr. Greger also discussed the source of the virus and how we can treat the cause and prevent future animal-to-human disease outbreaks. All of those topics have been now been turned into videos featured in this webinar and on NutritionFacts.org. 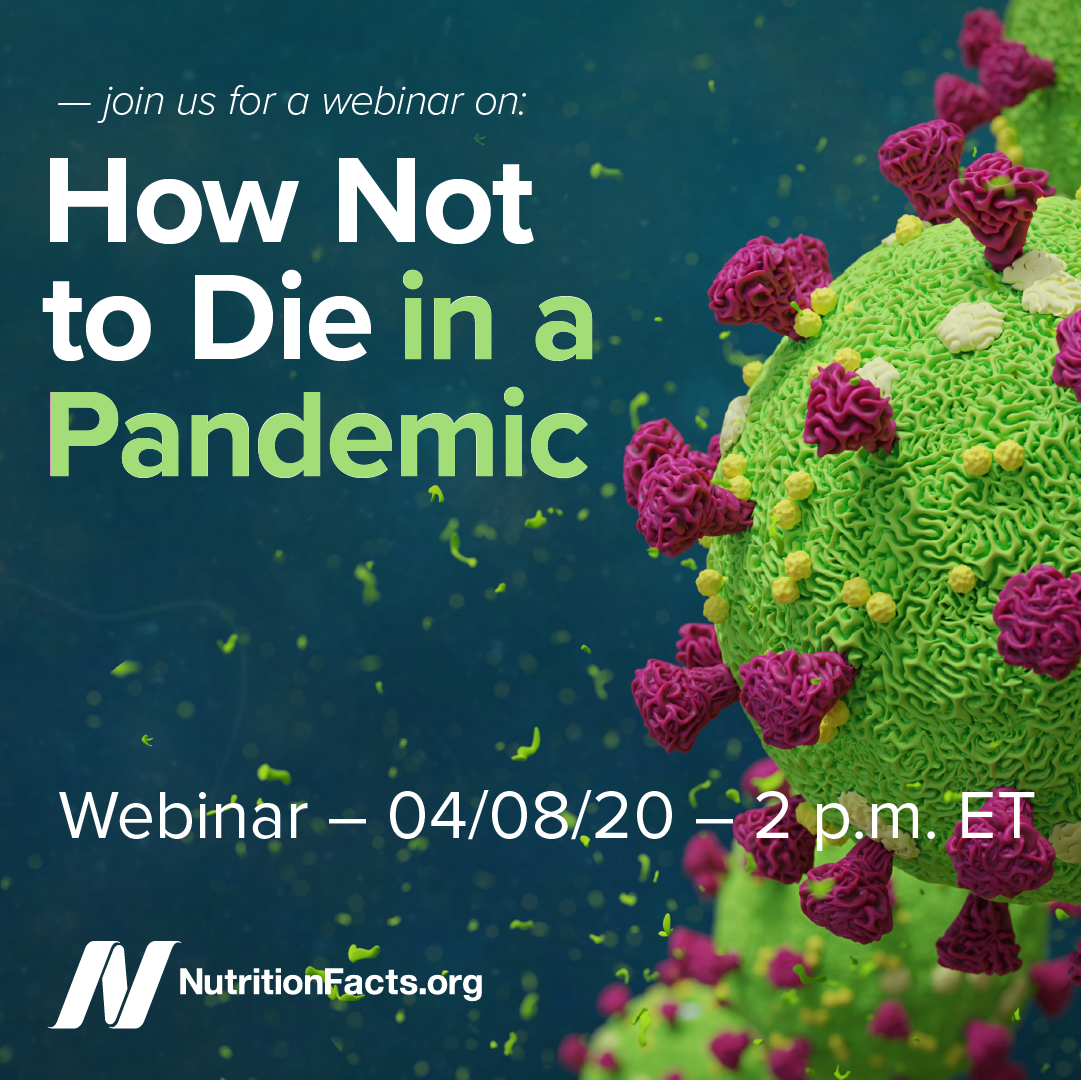 What is the best thing we can do to keep ourselves and our families safe from the coronavirus? Dr. Greger offers tips for optimal respiratory and hand hygiene, proper mask usage, how to make his DIY sanitizer solution, and how to prep for sheltering-in-place in case that becomes necessary. Dr. Greger also discussed the source of the virus and how we can treat the cause and prevent future animal-to-human disease outbreaks. 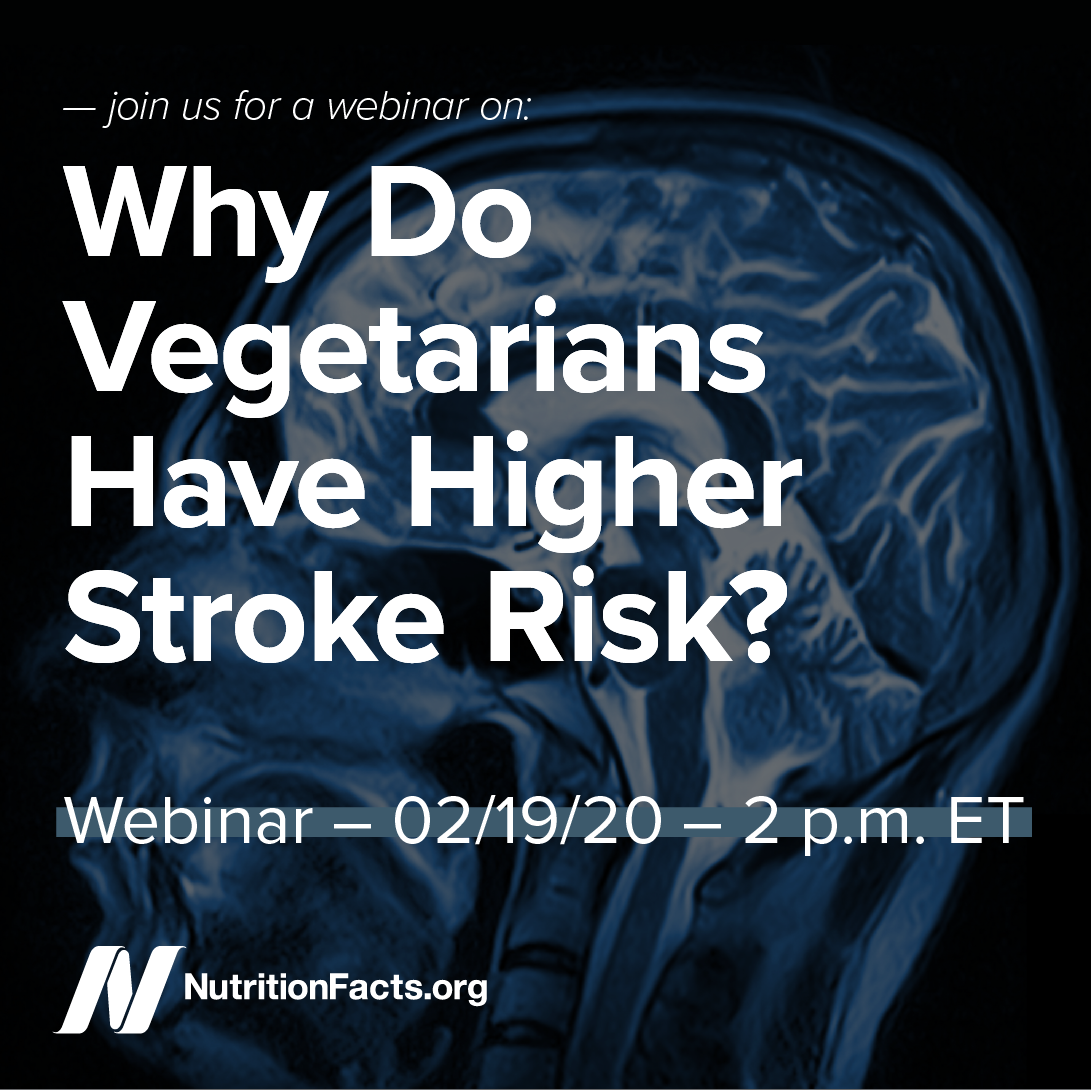 Given that high blood pressure and inadequate fruit and vegetable consumption are among the most important stroke risk factors, you would assume those eating plant-based diets would be at significantly lower risk, just as they are with heart attacks. You might be surprised to learn that there had never been any studies on the incidence of stroke in vegetarians, though…until now. And if you think that is surprising, wait until you hear the results. Yes, they had lower heart disease risk as expected, but those eating meat-free diets appeared to have more stroke risk. If that is indeed the case, what might be the cause, and what can we do about it? Dr. Greger did a deep dive in a 2-hour live webinar on 2pm ET on February 19th, 2020.