A number of artificial sweeteners have been approved in North America by the U.S. Food and Drug Administration, including aspartame and sucralose (sold as Splenda), but there are also natural “high-intensity sweeteners” found in plants. The global market for non-nutritive, or non-caloric, sweeteners, in general, is in the billions. This includes all the artificial ones and two natural ones extracted from plants—stevia and monk fruit. You may recall I’ve discussed stevia before, but what about monk fruit? That’s the subject of my video Is Monk Fruit Sweetener Safe?.

“The fruits of Luo Han Guo [monk fruit in Chinese] have been used for hundreds of years in China as a natural sweetener and as a folk medicine….The non-caloric sweet taste…results primarily from mogrosides, a group of cucurbitane-type triterpene glycosides that are present at about 1% in the flesh of the fruit.”

“The mixed mogrosides have been estimated to be about 300 times as sweet as sucrose [table sugar] so that an 80% extract was nearly 250 times sweeter than sugar.” If you read reviews in Chinese natural medicine journals, you’ll see pronouncements like this: Monk fruit “has been shown to have the following effects: antitussive [anti-coughing], anti-asthmatic, anti-oxidation, liver-protection, glucose-lowering [blood sugar-lowering], immuno-regulation, and anti-cancer.” What they don’t tell you up front, however, is that they’re talking about reducing ammonia-induced mouse coughs. What is this about a “natural food sweetener with anti-pancreatic cancer properties”? Indeed, monk fruit “may be used for daily consumption as an additive in foods and drinks to prevent or treat pancreatic cancer”—in your pet mouse. There was a study conducted on the “antiproliferative activity of triterpene glycoside nutrient from monk fruit in colorectal cancer and throat cancer,” but it was on colorectal and throat cancer cells in a petri dish. As you can see at 1:53 in my video, researchers did show mogrosides killing off colorectal cancer cells and throat cancer cells, and our digestive tract could be exposed directly to these compounds if we ate them. What’s missing, though? The researchers didn’t test it against normal cells. I mean, you could pee in a petri dish and kill off cancer cells, but the whole point is to find something that kills off cancer while leaving normal cells alone, something the researchers weren’t able to show in this study.

Are there any human studies on monk fruit? We’re in luck. “Owing to the rapidly growing popularity of natural plant-derived compounds, it will be of interest to determine whether natural NNS [non-nutritive sweeteners] would be a healthier alternative to sugar and artificial NNS for consumers.” So, researchers randomized people to drink beverages sweetened with either aspartame, monk fruit, stevia, or table sugar. They then measured blood sugars over 24 hours and found there was no significant difference amongst any of the four sweeteners. Wait a second. As you can see at 2:58 in my video, the sugar group was given 16 spoonsful of sugar, the amount of added sugar in a 20-ounce bottle of Coke. So, the other three groups consumed 16 fewer spoonsful of sugar yet still had the same average blood sugars?

Table sugar causes a big blood sugar spike, as you can see at 3:20 in my video. Drink that bottle of sugar water with its 16 spoonsful of sugar, and your blood sugars jump 40 points over the next hour. If you’re given a beverage sweetened with aspartame, monk fruit, or stevia, though, nothing happens. That’s to be expected, right? Those are non-caloric sweeteners without any calories, so isn’t it just like drinking water? In that case, how could your daily blood sugar values average out the same as drinking the sugar-sweetened drink? The only way that could happen is if the non-calorie sweeteners somehow made your blood sugar spikes worse later in the day.

Indeed, when people drink Splenda mixed with sugar water, they get a greater blood sugar spike and a greater insulin spike chugging the sugar with sucralose (Splenda) than without, even though Splenda alone causes no spike of its own, as you can see at 4:04 in my video. What about aspartame? Does it do the same thing? At the one-hour mark, the researchers fed the study participants a regular lunch, and their blood sugars went back up and down as they normally would after a meal. In the sugar group, their post-lunch levels didn’t spike as high as they did an hour earlier when they drank straight sugar water, though; there was just a gentle up and down. In the aspartame group, however, even though their blood sugars didn’t rise at the time they drank the aspartame-sweetened beverage, their blood sugars shot up higher, an hour later at lunch, as if they had just drank a bottle of soda.

What about the natural sweeteners? What happened in the stevia and monk fruit groups? The same thing happened. There was the same exaggerated blood sugar spike after a regular meal eaten an hour after drinking the naturally sweetened drinks. And, remember, this despite the fact that the three non-caloric sweetener groups—aspartame, stevia, and monk fruit—took in 16 fewer spoonsful of sugar. So, you can see how it all equals out in terms of average blood sugars, at least in part because those in the non-caloric sweetener groups ate more. After drinking a Diet Coke, you’re more likely to eat more at your next meal than after drinking a regular Coke. In fact, you’re likely to eat so much more that the energy “saved” from replacing sugar with non-caloric sweeteners is fully compensated for at subsequent meals, so there is no difference found in total daily calorie intake. The sugar-sweetened beverage led to large spikes in both blood sugar and insulin, whereas these responses were higher for the three other beverages following the lunch eaten later. So, when it comes to calorie intake, blood sugars, or insulin spikes, they were all just as bad.

Is Stevia Good for You? is the video I mentioned. 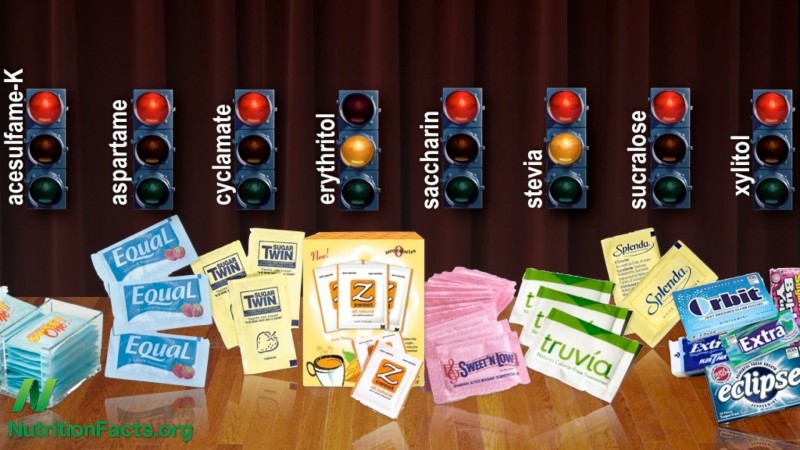 August 31, 2009
Most of the artificial sweeteners on the market have been associated with health problems.
Learn More 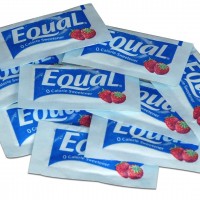 December 17, 2014
The reason artificially sweetened beverages have been associated with depression may be because of psychological disturbances recently tied to aspartame...
Learn More 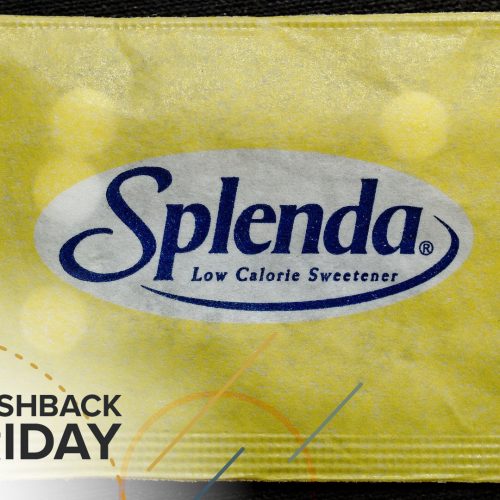 Flashback Friday: Effect of Sucralose (Splenda) on the Microbiome

May 15, 2020
What effect do artificial sweeteners such as sucralose (Splenda), saccharin (Sweet & Low), aspartame (Nutrasweet), and acesulfame K (Sweet One)...
Learn More 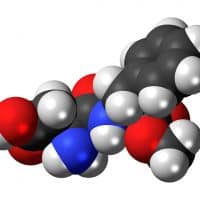 Does Aspartame Cause Cancer?

March 1, 2017
How should we parse the conflicting human data on intake of aspartame (Nutrasweet) and non-Hodgkin’s lymphoma, multiple myeloma, leukemia, and...
Learn More 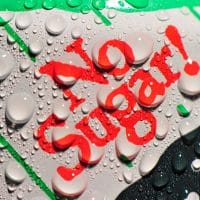 Does Diet Soda Increase Stroke Risk as Much as Regular Soda?

December 19, 2016
Sugar is no longer considered just empty calories, but an independent risk factor for cardiovascular disease. So what happens if...
Learn More