The secret to unlocking the benefits of chia seeds may be grinding them up.

When recently reviewing the literature on the health-promoting properties and therapeutic applications of chia seeds, I ran into a lot of studies discussing, for example, “strategies for incorporation of chia (Salvia hispanica L.) in frankfurters as a health-promoting ingredient.” After all, “recent years have seen increasing pursuit of healthier lifestyles, among them dietary habits. In response to this, there has been a great deal of interest worldwide in…compounds originally present in plants to provide health benefits in foods.” Yes, but in hot dogs? And, indeed, “reformulated frankfurters with chia contained significantly greater amounts of [plant] proteins, insoluble dietary fiber, [and] minerals….Given this nutritional profile, the products thus produced could qualify for labelling with a variety of nutrition and health claims.” And, what do you know? “Chia oil–enriched restructured pork” actually does affect “aged rats” fed bad diets. So…let’s slap on that health claims label!

Chia has been eaten for thousands of years, suggesting it’s at least safe to consume, but does it offer any special benefits? It’s certainly nutritious. Chia seed has a lot of fiber, antioxidants (black chia seeds perhaps more than white), and plant protein, and also contains a lot of B vitamins and minerals. So, yes, it’s nutritious—like nearly any whole plant food. But, again: Does it have any special benefits? People trying to sell you chia seeds make all sorts of claims, but to “definitively establish their actual beneficial effects,” we need a little something called “scientific evidence instead of cultural traditions, personal beliefs, or even inaccurate advertising,” a redundant term if I’ve ever heard one.

For example, if you look on YouTube, you’ll find more than 50,000 videos on chia seeds and belly fat, but what does the science say? Apparently, dietary chia seeds do reduce belly fat…in rats. They also reduce the weight…of chickens. Evidently, “consumers are reluctant to eat poultry products smelling or tasting like fish,” so by feeding chickens chia seeds, you can boost their omega-3 levels without turning the meat into funky chicken. What happens if you just cut out the middlehen and eat chia yourself? I discuss this in my video Do Chia Seeds Help with Belly Fat?.

What happens, for instance, if you add a teaspoon or two of chia seeds to yogurt as a snack? After eating yogurt with chia, “participants reported significantly lower scores for hunger” and ended up eating fewer calories at lunch two hours later. My initial thought was, well, duh—if you give people more food by adding chia to whatever they’re eating, then of course they’ll be less hungry. But, as you can see at 2:44 in my video, the researchers gave the subjects less yogurt to compensate for the addition of chia, so each snack had the same number of calories. What happened at lunch two hours later? The study participants didn’t just eat a little less food; they ate about 25 percent fewer calories after the chia. A teaspoon of chia seeds only has around 50 calories, and subjects ended up eating nearly 300 fewer calories at lunch, so that’s way more than just compensating. We can at least say that chia seeds are more satiating than yogurt. So, if you ate some chia seeds every day as a snack—one teaspoon seemed to work as well as two—you’d expect to lose weight over time. You don’t know, though, until you…put it to the test. Subjects were randomized to a whole tablespoon of chia seed twice a day before their first and last meal for 12 weeks, and the researchers found that “[c]hia seed does not promote weight loss” after all. That’s disappointing.

Well, we know from the flaxseed literature that if you give people muffins made out of whole flax seeds, they don’t seem to really absorb all the benefit compared to ground flaxseed muffins. The same appears to be true with chia seeds. As you can see at 3:57 in my video, if you eat whole chia seeds for ten weeks, there’s no increase in short-chain omega 3 levels or long-chain omega 3s. But, if you eat the same amount of ground chia seeds, levels shoot up. So, maybe the problem with that study is that the researchers gave people whole chia seeds. What we really need is a study on ground chia and weight loss, and researchers gave us just that.

In a randomized controlled trial, one group was given about two tablespoons of ground chia a day, and another group got a fiber-matched control made of mostly oat bran. This is how you know it wasn’t funded by a chia seed company: The researchers pitted the chia head-to-head against a real control to match the fiber content instead of just putting it up against a sugar pill. That way, if there were weight loss, we’d know it wasn’t due just to the fiber, but something particular to the chia. And, indeed, as you can see at 4:42 in my video, those eating the ground chia lost significantly more weight and significantly more waist in terms of waist circumference, which is a measure of belly fat, and, as a bonus, had a decrease in their c-reactive protein levels, suggesting an anti-inflammatory effect as well. So, maybe some of those 50,000 YouTube videos aren’t completely off.

There is one form of chia powder I’d stay away from, though. In a previous video, Which Are Better: Chia Seeds or Flaxseeds?, I talked about using chia gel to replace eggs or oil in baking, by mixing a teaspoon of chia seeds with a quarter cup of water and letting it sit for a half an hour. It’s certainly a way to lower cholesterol and skipping the eggs seems like it would cut down your Salmonella risk, but there was an international outbreak of Salmonella linked to sprouted chia seed powder that infected 94 people across 16 U.S. states and 4 Canadian provinces. Sprouting can “create an ideal environment for bacterial growth.” Granted, it’s not as bad as Salmonella-tainted eggs, which may sicken 79,000 Americans every year, but I would still recommend staying away from sprouted chia seed powder. 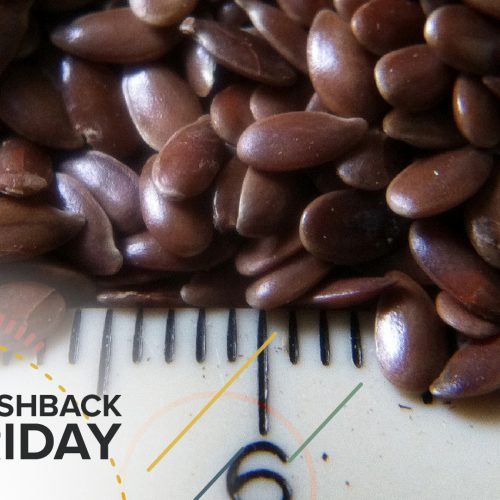 May 17, 2019
Extraordinary results reported in a rare example of a double-blinded, placebo-controlled, randomized trial of a dietary intervention (flaxseeds) to combat...
Learn More 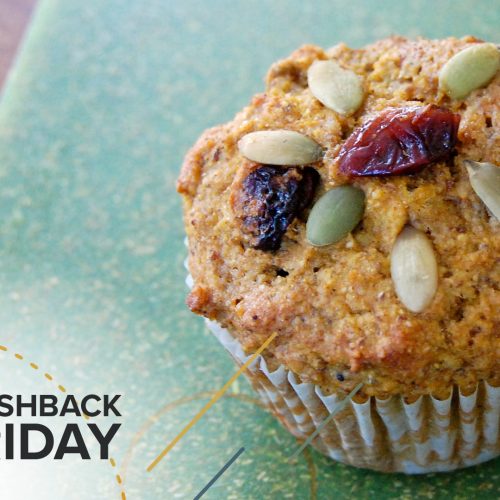 April 10, 2020
Flax seed consumption may play a role in preventing and treating breast cancer by blocking the inflammatory effects of interleukin-1.
Learn More 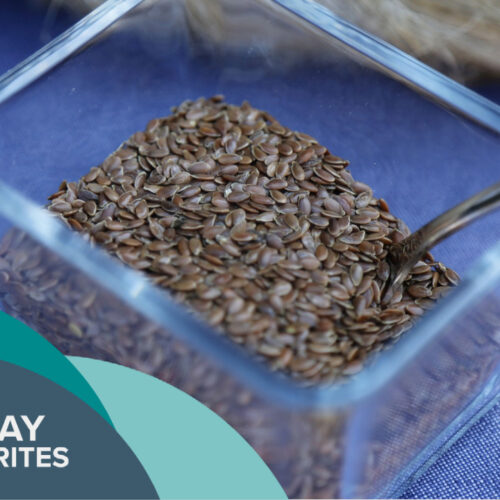 Friday Favorites: How Well Does Cooking Destroy the Cyanide in Flaxseeds and Should We Be Concerned About It?

April 29, 2013
A tablespoon a day of ground flax seeds appears to improve ovarian function, and is considered a first-line therapy for...
Learn More

March 25, 2013
What happens when men with prostate cancer and prostatic intraepithelial neoplasia (PIN) are placed on a relatively low-fat diet, supplemented...
Learn More

Salmonella in Chicken & Turkey: Deadly but Not Illegal

March 22, 2013
Hundreds of thousands of Americans are Salmonella-poisoned by poultry every year—yet it remains legal to sell meat proven to be...
Learn More

February 10, 2014
The meat industry sued the federal government, winning the right to sell food known to be contaminated with food-poisoning bacteria.
Learn More

February 7, 2014
Foster Farms chicken may have infected and sickened more than 10,000 people, due to contamination of the meat with fecal...
Learn More 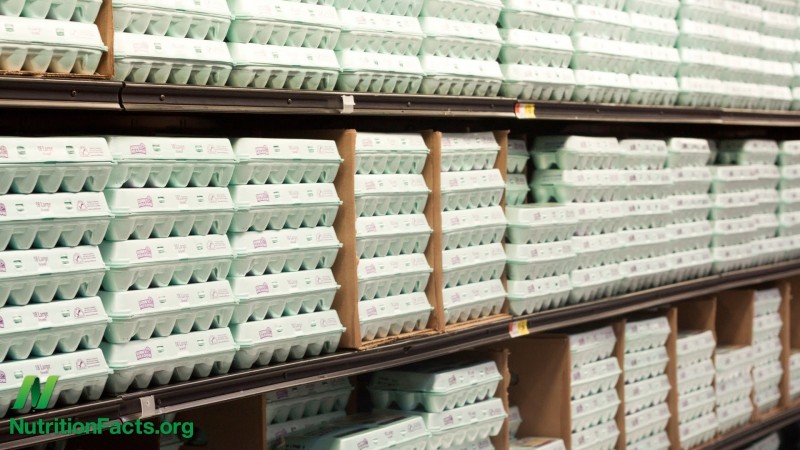 November 17, 2011
Salmonella, the leading cause of food poisoning-related death, can survive most common egg cooking methods—including scrambled, over-easy, and sunny side...
Learn More