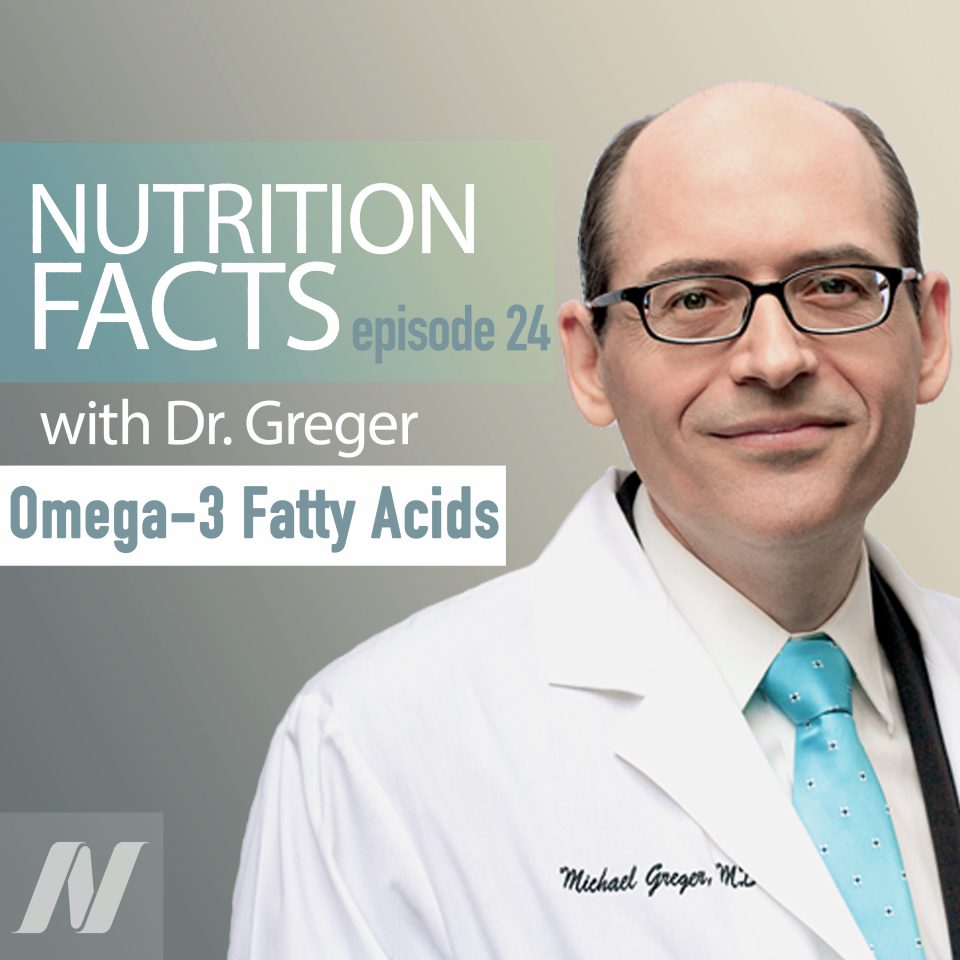 Today we weigh the potential health benefits of omega-3 fatty acids with the risks of ingesting too much mercury.

This episode features audio from Mercury vs. Omega-3s for Brain Development, Omega-3s, Prostate Cancer, and Atrial Fibrillation, and Omega-3s and the Eskimo Fish Tale.

Welcome to Nutrition Facts.  I’m your host, Dr. Michael Greger, and I’m here to ask you, what is the most important decision you’ll make today, is it how you’ll get to work, who you’ll set up a meeting with, what friend you’ll call for lunch?  Well, as it turns out, probably the most important decision you’ll make today is what to eat.  What we eat on a day-to-day basis is the number one determinant of our health and longevity—literally.  Most premature deaths in the United States are preventable and related to nutrition.  So, we’re going to explore some smart nutrition choices based, naturally, on facts.  Here, we refer to the science, the research, the available data published in the peer-reviewed medical literature right now.  That’s why I wrote my book, “How Not to Die”, and why I created my nonprofit site NutritionFacts.org and, now, this podcast.

Today, we’re going to discuss the potential health benefits associated with long–chain omega-3 fatty acid intake, found primarily in seafoods.  These benefits may include boosting the health and intelligence of unborn babies, though the mercury in fish may significantly decrease IQ.

A risk–benefit analysis of 33 fish species contrasts the brain-boosting effects of the long–chain omega–3 DHA with the brain-damaging effects of mercury, to determine the net effect on intelligence.  Here’s the story.

Just because fish-eating mothers may give birth to children with smaller brains, doesn’t necessarily mean their children will grow up with neurological defects.  But using real-time functional MRI scans, you can actually see the difference in brain activation in teens whose moms ate a lot of seafood when they were pregnant.  Fish consumption may also increase the risk of our children being born with epilepsy.

Does maternal fish consumption have an effect on how smart our kids turn out, though?  Well, look; the DHA in fish—the long-chain omega-3 fatty acid—is good for brain development.  But, of course, the mercury is bad for brain development.  So, what these researchers did was look at 33 different fish species to see what the net effect of these compounds would have on children’s IQ.  And, for most fish species, they found that the adverse effect of mercury on the IQ scores of children “exceeded the beneficial effects of DHA.”  So much lost brainpower from fish consumption that our country may actually lose 5 billion dollars in economic productivity every year.

For example, our most popular fish, tuna.  If pregnant women ate tuna every day, the DHA in the fish would add a few IQ points.  But, the mercury in that very same tuna would cause so much brain damage that the overall effect of eating tuna while pregnant would be negative—wiping out an average of eight IQ points.  In fact, the only two more brain-damaging fish were pike and swordfish.

At the other end of the spectrum, the brain-boosting effect of DHA may trump the brain-damaging effects of mercury in salmon by a little less than one IQ point.  Unfortunately, IQ just takes into effect the cognitive damage caused by mercury, not the adverse effects on motor function, and attention, behavioral deficits.  We think that attention span may be particularly vulnerable to developmental mercury exposure, probably due to damage to the frontal lobes of the brain.  And, the IQ study didn’t take into account the relatively high levels of PCBs in salmon, and the accompanying concerns about “cancer risk.”

Adding sustainability concerns adds another wrinkle, as farm-raised salmon are considered a “fish to avoid.”  Whereas king mackerel is considered a “best” choice for sustainability, but the mercury levels are so high as to warrant avoiding consumption—exceeding both the FDA and EPA action levels for mercury contamination.

The way I look at it is why accept any loss of intelligence at all, when pregnant women can get all the DHA they want from microalgae supplements, without any of the contaminants—getting the brain boost, without the brain damage.

Fish and fish oil consumption does not appear to protect against heart disease, arrhythmias, or sudden death, but why might they increase cancer risk?

2013 was a bad year for fish oil.  Claims were crushed that the long-chain omega-3s in fish oil, EPA and DHA, would stop the progression of heart disease and, then, DHA was associated with increased risk of prostate cancer and monumentally failed to treat macular degeneration.  This over-the-top rhetoric sounded a little suspicious and, indeed, the paper was retracted because the author sells some rival supplement that he failed to disclose.  But, he does have a point.

But now that we know that not only does there appear to be no benefit for death, heart attack, or stroke, but there may be an elevation in cancer risk, the general recommendations to increase the intake of these fats should consider its potential risks.

How could eating more fish or fish oil increase cancer risk?  Well, there are some industrial pollutants, like PCBs, linked to increased prostate cancer risk, and the primary source of exposure in the general population is believed to be through diet, from fish, meat, and dairy products.  If you do a supermarket survey, the PCBs, shown in white here, are highest in freshwater fish, and lowest in vegans—cannibals take note!  No, that’s just how they label the market basket of plant foods, though vegans have been tested, and were found to be significantly less polluted, including the PCB specifically linked to prostate cancer.  But, this study here was done in North America, where people don’t eat a lot of fish and, indeed, even the group with the highest DHA levels weren’t that high.  And, so, maybe the confounding factor was meat consumption in general, not just fish, and that lower meat consumption may be the reason for the lower rates of prostate cancer in the lower DHA group, as the consumption of well-done meat is associated with an increased risk of prostate cancer, and intake should be restricted.

We also used to think omega-3s could protect us from arrhythmias (abnormal heart rhythms), like atrial fibrillation.  Millions suffer from the condition, which causes an irregular heartbeat and a higher risk of stroke and death, but fish and fish oil consumption does not appear effective for preventing it or treating it.

Other arrhythmias can be life-threatening and cause sudden death.  Despite initial encouraging results, more recent studies have not only failed to reduce sudden cardiac death with omega-3s, but actually increased mortality in cardiac patients.  For example, men with heart disease advised to eat more oily fish, or supplied with fish oil capsules, were found to have higher risk of cardiac death—maybe because of the contaminants in fish, such as mercury?

In either case, given the inconsistent benefits, the potential adverse effects, you know, omega-3s must be prescribed with caution, and generalized recommendations to increase fish intake or to take fish oil capsules need to be reconsidered.

The common fable that heart disease was rare among the Eskimos appears to be a myth.  Here’s the research.

The revelation that fish oil appears useless in preventing heart disease, in either heart patients or for those trying to prevent heart disease in the first place, leads one to wonder:  How did this whole fish tale begin?

Well, the common mythology is that in response to anecdotal reports of a low prevalence of coronary heart disease among the Eskimo, Danish researchers Bang and Dyerberg went there and confirmed a very low incidence of heart attack.  Now, the absence of coronary artery disease would be strange in a meat-based diet, hardly any fruits and vegetables—violating all principles of heart-healthy nutrition.  This paradox then was attributed to all the seal and whale blubber they were eating, which is extremely rich in omega-3 fish fat, and the rest is history.  The problem is, it isn’t true.  The fact is they never examined the cardiovascular status of the Eskimo; they just accepted at face value this notion that coronary atherosclerosis is almost unknown among the Eskimo, a concept that has been disproven over and over starting in the ‘30s.  In fact, going back over a thousand years, we have frozen Eskimo mummies with atherosclerosis.  Another from 500 years ago, a woman in her early 40s – atherosclerosis in her aorta and coronary arteries.  And these aren’t just isolated cases.  The totality of evidence from actual clinical investigations, autopsies, imaging techniques, is that they have the same plague of coronary artery disease that non-Eskimo populations have, and actually have twice the fatal stroke rate and don’t live particularly long.

Considering the dismal health status of Eskimos, it is remarkable that instead of labeling their diet as dangerous to health, they just accepted and echoed the myth, trying to come up with a reason to explain the false premise.  Such dismal health that the Westernization of their diets actually lowered their rates of ischemic heart disease.  You know your diet’s bad when the arrival of Twinkies improves your health.

So, why do so many researchers to this day unquestioningly parrot the myth?  Publications still referring to Bang and Dyerberg’s nutritional studies as proof that Eskimos have low prevalence of heart disease represent either misinterpretation of the original findings or an example of what’s called confirmation bias, which is when people cherry pick or slant information to confirm their preconceived notions.  They quote the great scientist, Francis Bacon: “We prefer to believe what we prefer to be true.”  And so we get, literally, thousands of articles on the alleged benefits of omega-3 fatty acids, we’ve got a billion-dollar industry selling fish oil capsules, millions of Americans taking the stuff, all based on a hypothesis that was questionable from the beginning.

To see any graphs charts, graphics, images or studies mentioned here, please go to the Nutrition Facts podcast landing page.  There, you’ll find all the detailed information you need plus links to all the sources we cite for each of these topics.

NutritionFacts.org is a nonprofit, science-based, public service, where you can sign up for free daily updates on the latest in nutrition research via bite-sized videos and articles.