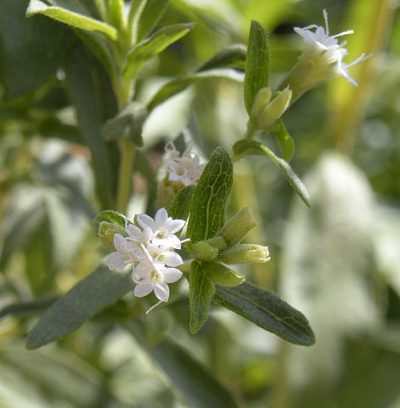 Stevia is a natural, non-caloric sweetener extracted from the stevia plant.

A study that pitted sugar against non-caloric sweeteners showed that there was no significant difference between blood sugar averages for the day with sugar, monk fruit, aspartame, or stevia. Participants were randomized to drink water with 16 tablespoons of sugar or one of the non-caloric sweeteners. The sugar group had an immediate spike in blood sugar, whereas the zero-calorie groups had no immediate spike, but at meal-time they ate more calories than the sugar group which sent their blood sugar as high as if they had had a soda.

It has been shown to produce a spike in mutagenic DNA damage through a transformation in our gut at excessive doses.  The World Health Organization recommends a limit of 4mg/kg of body weight (or 1.8mg of stevia compounds per pound). Based on that limit, as long as you drink less than the equivalent two stevia-sweetened beverages a day, it can be considered harmless.

Image Credit: Ethel Aardvark / Wikimedia. This image has been modified.

All Videos for Stevia