What does the best available balance of evidence say right now about what to eat and what to avoid to reduce your risk of cancer?

In 1982, a landmark report on diet, nutrition, and cancer was released by the National Academy of Sciences. It was “the first major, institutional, science-based report on this topic.” The report started out saying that “scientists must be especially careful in their choice of words whenever they are not totally confident about their conclusions.” For example, by that time, it had become “absolutely clear” that cigarettes were killing people. “If the population been persuaded to stop smoking when the association with lung cancer was first reported, these cancer deaths would not be occurring.” If you wait for absolute certainty, millions of people could die in the meantime, which is why, sometimes, you have to invoke the precautionary principle.

For example, “emphasizing fruits and vegetables to reduce the risk of several common forms of cancer.” We’re not completely sure, but there’s good evidence—and what’s the downside? “There are no disadvantages for healthy people eating more fruits and vegetables,” as I discuss in my video The Best Advice on Diet and Cancer.

The 1982 National Academy of Sciences report continued: “The public is now asking about the causes of cancers that are not associated with smoking. What are these causes, and how can these cancers be avoided? Unfortunately, it is not yet possible to make firm scientific pronouncements about the association between diet and cancer. We are in an interim stage of knowledge similar to that for cigarettes 20 years ago. Therefore, in the judgment of the committee, it is now the time to offer some interim guidelines on diet and cancer.”

The committee raised concern about processed meats, for example, and, 30 years later, that concern was confirmed. Processed meat was officially declared “carcinogenic to humans.” Maybe if we had listened back in the early 1980s when the red flag first started waving, then we would have been spared Lunchables, about which a CEO of Philip Morris said: “One article said something like, ‘If you take Lunchables apart, the most healthy item in it is the napkin.’”

The findings of this landmark 1982 diet and cancer report “generated a striking level of disbelief from the cancer community and outright hostility from people whose livelihood depended on foods in question and the food industry whose products were being questioned.” In fact, one of the authors of the report was “accused of ‘killing more people than those being saved,’” and there were formally organized petitions to expel the researchers from their professional societies. Indeed, “clearly a very sensitive nerve was touched.”

The American Meat Science Association and other members of the Council for Agricultural Science and Technology criticized the report and released “Diet, Nutrition, and Cancer: A Critique” in 1982. They agreed that perhaps lives would be saved, but argued that the recommended “reductions in meat consumption would sharply reduce incomes to the livestock and meat processing industries….The fruit and vegetable industries would clearly benefit from the expanded demand for their products if consumers were to implement the guidelines. However, fruits and vegetables account for less than 15 percent of cash receipts for U.S. agriculture.” Most of the money is in “cattle, hogs, poultry products, feed grains, and oil crops.” This reminds me of the tobacco industry memo where Philip Morris spoke of the tobacco industry going bankrupt.

Maybe it’s not the meat that’s causing cancer, the industry critique continued, but all the marijuana people are smoking these days. “How then can one argue that such an abundant diet causes cancer? Or is this only some jealous attack on the goodness of our diet, like that of the Reverend Jonathan Edwards in Puritan times who condemned bear baiting, not because of the pain for the bear but because of the pleasure of the spectators.” You can’t tell us to cut down on meat, they argued, “one of mankind’s few remaining pleasures is that of the table.”

The day the National Academy of Sciences’ landmark report was published was “The Day That Food Was Declared a Poison” according to Thomas Jukes, the guy who discovered you could speed up the growth of chickens by feeding them antibiotics. How dare the National Academy of Sciences recommend people eat fruits, vegetables, and whole grains daily, which were said to contain “as yet unidentified compounds that may protect us against certain cancers. How can one select foods that contain unidentified compounds?…This is not a scientific recommendation; it sounds like ‘health food store’ literature.”

My favorite critique, though, told us to think about the human breast. How can animal fat be bad for us if breast-feeding women create so much of it? Women are animals, and their mammary glands make fat for breast milk. Therefore, we shouldn’t have to cut down on burgers. Huh?

Look, we all have to make dietary decisions every day and “cannot wait for the evolution of scientific consensus.” Until we know more, all we can do to protect ourselves and our families is “act on the best available evidence” we have right now.

The level of evidence required to make decisions depends on the level of risk. If we’re talking about a new drug, for example, given the fact that medications kill more than a hundred thousand Americans a year—which is Why Prevention Is Worth a Ton of Cure—you want to be darn sure that the benefits outweigh the risks before you prescribe or take a drug. But what level of evidence do you need to eat broccoli? Do you need randomized, double-blind, placebo-controlled trials? (How would you even design a placebo vegetable?) Even if all of the evidence suggesting how powerful broccoli is turned out to be some crazy cruciferous conspiracy, what’s the worst that could have happened? It’s healthy anyway! That’s the beauty of safe, simple, and side effect–free solutions provided by the lifestyle medicine approach. They can only help.

I have so many more videos on diet and cancer for you. How Not to Die from Cancer may be a good place to start before you check out some more in related videos. 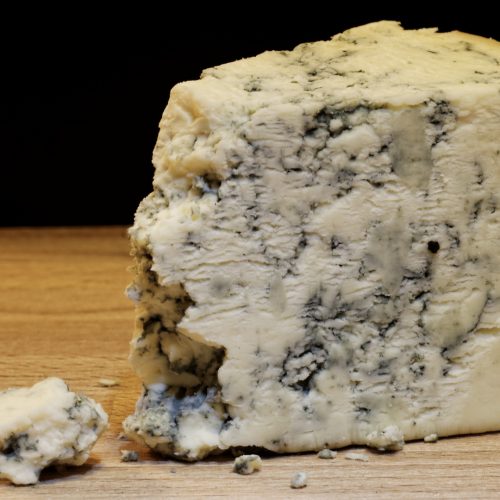 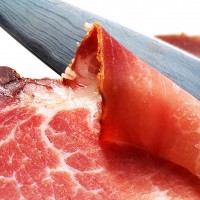 The Palatability of Cancer Prevention

March 16, 2016
Dietary guidelines often patronizingly recommend what is considered acceptable or achievable, rather than what the best available balance of evidence...
Learn More 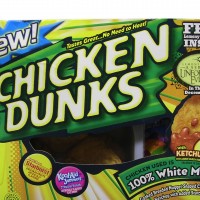 How Much Cancer Does Lunch Meat Cause?

November 11, 2015
Why does the leading cancer and diet authority recommend we avoid bacon, ham, hot dogs, sausage, and all other processed...
Learn More 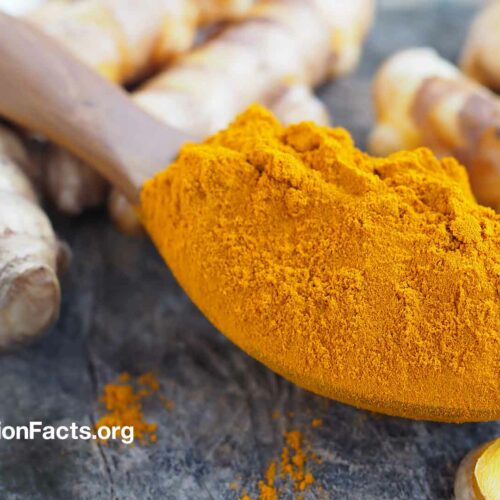 March 12, 2014
Dramatically lower cancer rates in India may in part be attributable to their more plant-based, spice-rich diet.
Learn More

May 22, 2013
Modest lifestyle changes that include the avoidance of alcohol may cut the odds of breast cancer in half, but certain...
Learn More 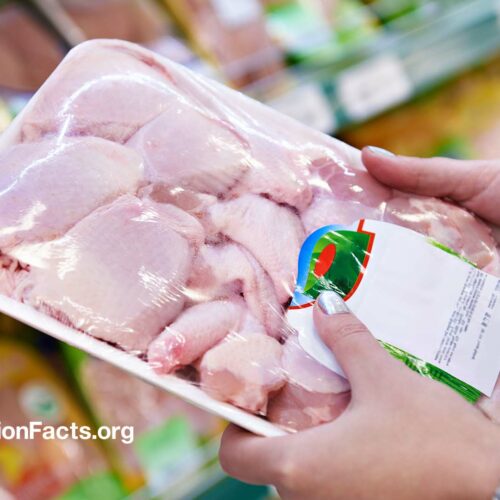 April 6, 2012
In a study of a half million people, which was most associated with the risk of developing lymphoma? Red meat,...
Learn More 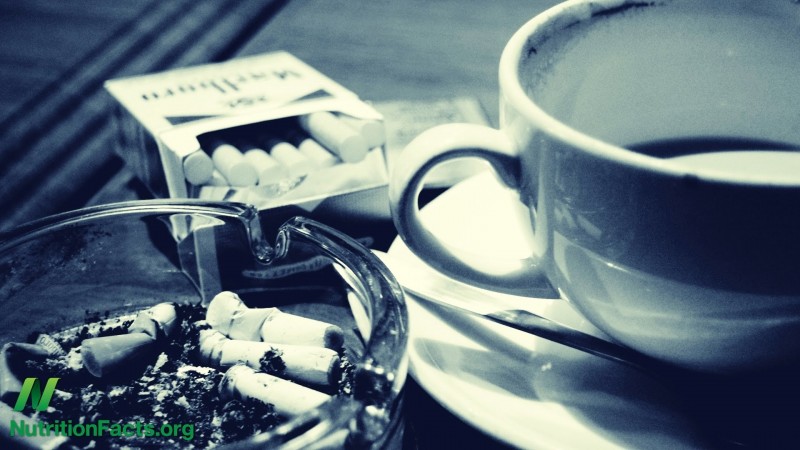 Food Is a Package Deal 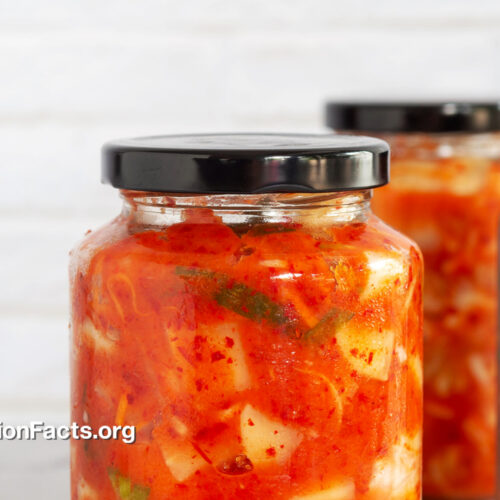 The Role of Kimchi and H. Pylori in Stomach Cancer 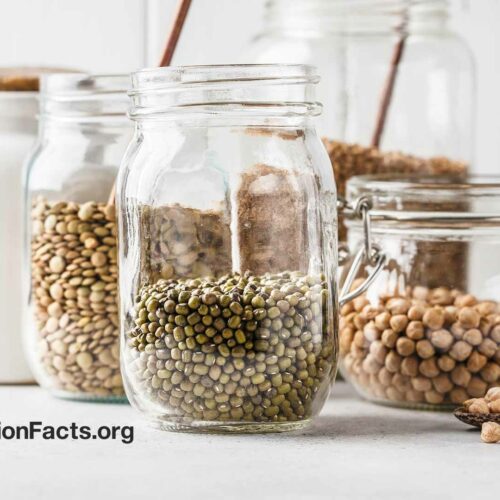 Blocking the Cancer Metastasis Enzyme MMP-9 with Beans and Chickpeas

April 13, 2022
Which legumes are best at inhibiting the matrix metalloproteinase enzymes that allow cancer to become invasive?
Learn More 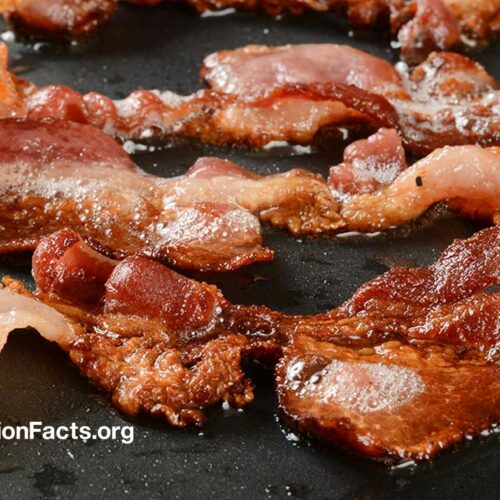 How Much Cancer Does Processed Meat Cause? 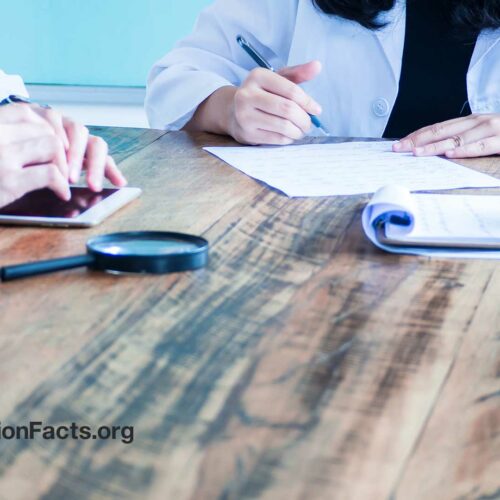 April 4, 2022
How did the meat industry, government, and cancer organizations respond to the confirmation that processed meat, like bacon, ham, hot...
Learn More 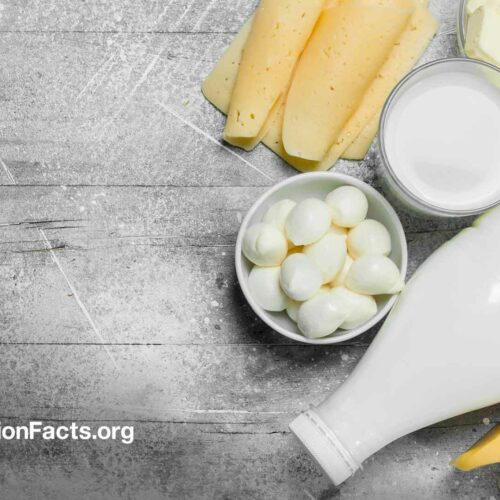 Breast Cancer and the Bovine Leukemia Virus in Meat and Dairy

March 9, 2022
Exposure to the bovine leukemia virus from meat and dairy (or a blood transfusion from those who eat meat or...
Learn More 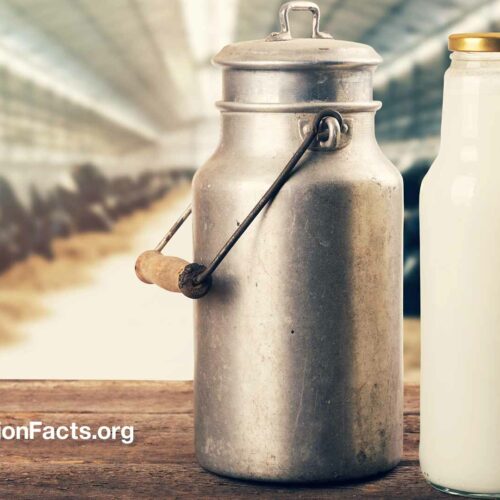 Bovine Leukemia Virus as a Cause of Breast Cancer

March 7, 2022
As many as 37 percent of breast cancer cases may be attributable to exposure to bovine leukemia virus.
Learn More 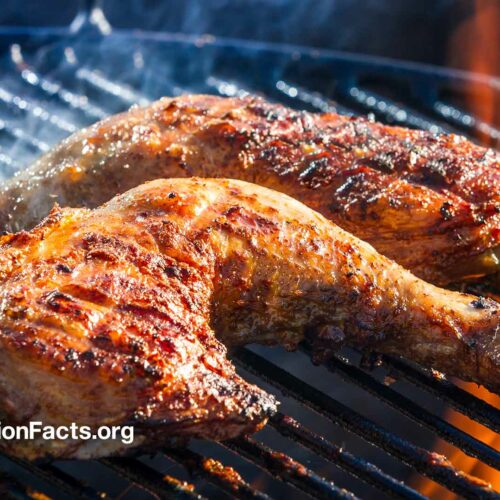 March 2, 2022
Billion-dollar drugs pulled from the market for carcinogenic contamination less than that found in a single serving of grilled chicken.
Learn More 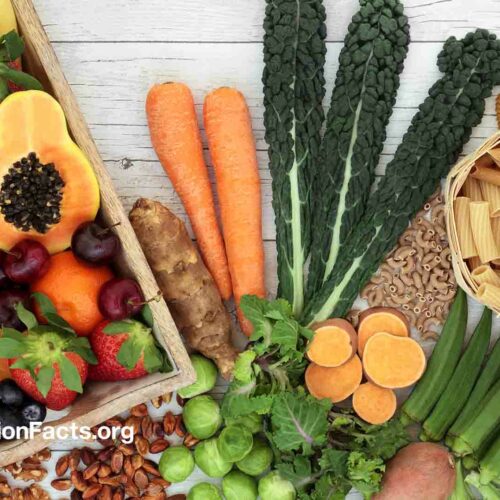 Fighting the Ten Hallmarks of Cancer with Food

January 17, 2022
The foundation of cancer prevention is plants, not pills.
Learn More 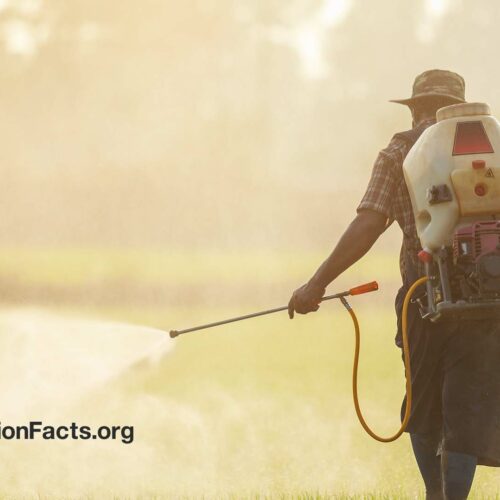 January 12, 2022
Does choosing organic over conventional foods protect against cancer? The effects of pesticides on cancer risk.
Learn More 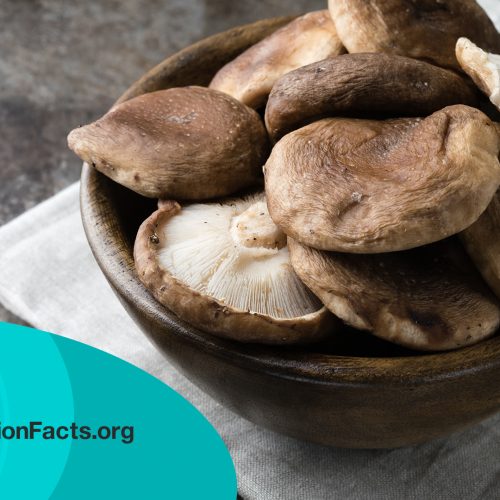 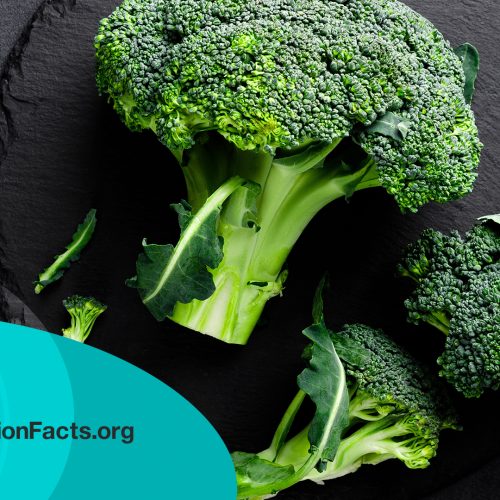 The Food That Can Downregulate a Metastatic Cancer Gene

June 14, 2021
Women with breast cancer should include the “liberal culinary use of cruciferous vegetables.”
Learn More 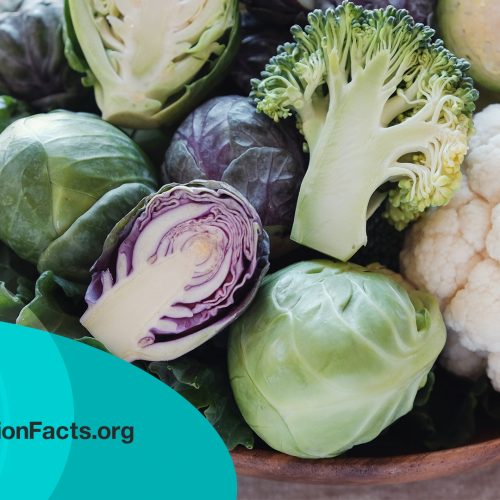 How to Help Control Cancer Metastasis with Diet 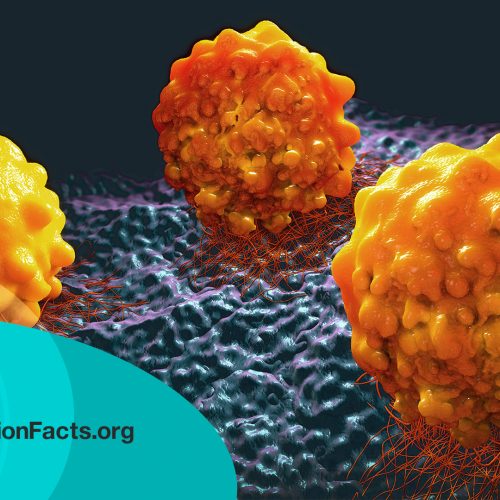 What Causes Cancer to Metastasize?

June 7, 2021
Palmitic acid, a saturated fat concentrated in meat and dairy, can boost the metastatic potential of cancer cells through the...
Learn More