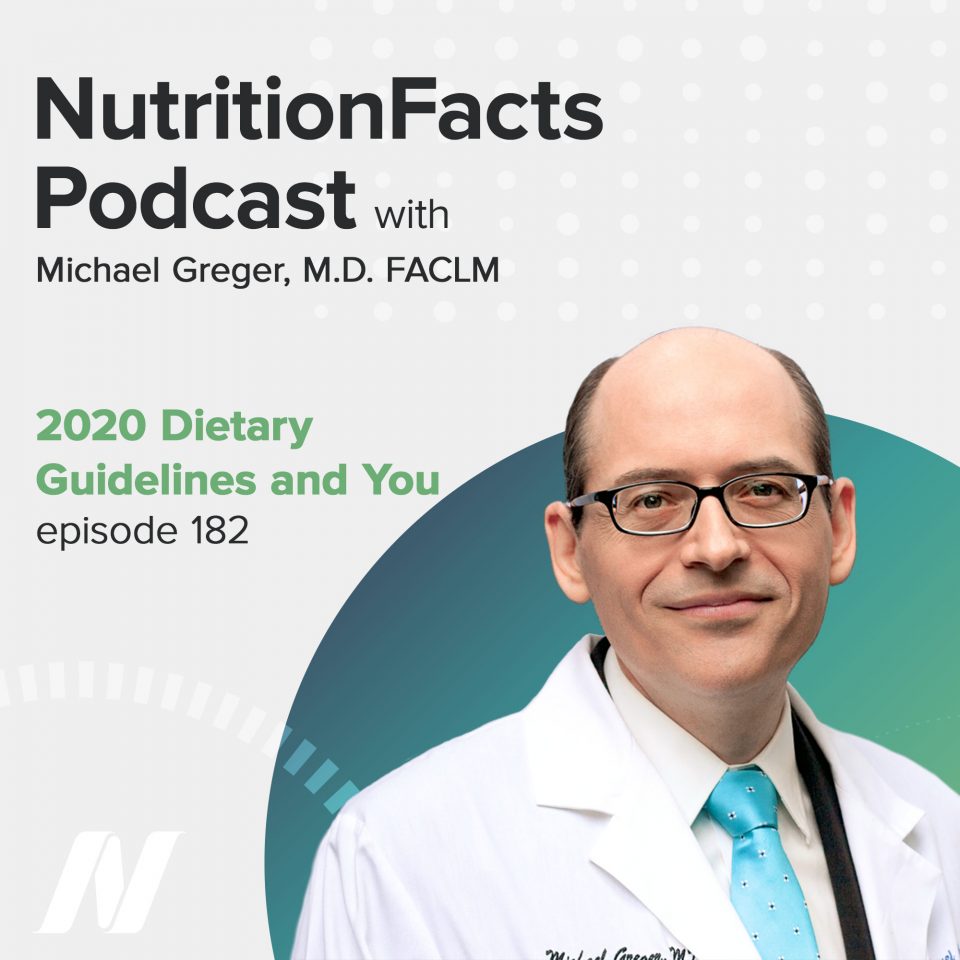 Today we feature highlights from the 2019 Guidelines Advisory hearings.

This episode features audio from Highlights from the 2020 Dietary Guidelines Hearing. Visit the video page for all sources and doctor’s notes related to this podcast.

In late 2019, I was honored to testify before the US government’s Dietary Guidelines Advisory Committee. Here are some highlights from this educational hearing.

The produce people were there: “Enjoy more fruits and vegetables in all forms for healthier, happier lives. Have a plant.”

This evidently inspired some of the audience members to put theory into practice. Of course, the meat industry was also out in full force. The Cattlemen’s Association complained that:

“Americans are getting fewer calories and less fat from nutrient-rich beef,” The Meat Institute appeared a bit threatened by plants. “It is inappropriate and a disservice to the public to consider beans or tofu as equivalent to meat and poultry products from a nutrition and health perspective, because they’re not.”

There were some inspirational, impassioned appeals for example Audrey Sanchez, speaking as a mother, and executive director of Balanced, a nonprofit organization that NutritionFacts.org was honored to have played a role in getting off the ground: “So, now is not the time to settle for the status quo, or to build a consensus around minimally ‘good enough.’ It’s certainly not the time to allow any part of the food industry to influence dietary guidelines. Now is the time for bold, evidence-based dietary guidelines that put the health of our children and our families first.”

Of course, there’s always the low-carb keto-craze to keep things interesting: “You know, if laughter was the best medicine, then the nutritional guidelines are best practiced, because they’re a joke.”

Pam Popper jumped to the committee’s defense: “So there’s a lot of confusion about diet. Some of it’s been sowed here; people advocating high-fat diets. And I personally take offense to anybody who would come up here and say that the dietary guidelines are a joke.”

Milton Mills called out the committee for historically recommending a beverage that most communities of color can’t even properly digest. “So, I want to encourage you to get the racism out; get the dairy out. Please do your job. Thank you.”

Then, it was my turn: “My name is Dr. Michael Greger with Nutritionfacts.org. This month, a paper was published in the Journal of the Academy of Nutrition and Dietetics. They found that essentially, there’s been no change in processed meat consumption over the last 20 years or so, which represents just an abject failure of all of us in the public health community to warn people about the very real risks of processed meat. Bacon, ham, hot dogs, lunch meat, sausage: these are known human carcinogens.

The official 2018 IARC report couldn’t have been clearer: “Consumption of processed meat causes cancer of the colorectum.” That’s our second leading cancer killer of men and women combined. We know these foods cause cancer. I mean, we try not to smoke around our kids; why would we send them to school with a baloney sandwich? That’s not hyperbole. According to the Surgeon General, living with a smoker increases the risk of lung cancer 15%. So, the cancer risk of secondhand smoke is comparable to the 16% or 18% increased risk of colorectal cancer eating the equivalent of a single sausage link a day.”

The 2015 Dietary Guidelines really appeared to drop the ball in this issue, saying processed meat could be “accommodated” as long as sodium and saturated fat limits were within limits. But that’s ignoring the cancer risk which we’ve known at least back since 2007, when the first comprehensive analysis was published by the American Institute for Cancer Research. In fact, one of their top ten recommendations for cancer prevention: Avoid Processed Meat. Full stop.

The American Cancer Society also encourages people to minimize intake of processed meat. We cannot allow the billion-dollar meat industry to continue to subvert the science when so many million lives are at stake. The Global Burden of Disease Study, the largest study of disease risk factors in history funded by the Bill and Melinda Gates Foundation found that the #1 cause of death in these United States is the American diet. Since bumping tobacco to #2, this committee now has control over our #1 killer.

You know, 1964 was the peak year of smoking in the U.S. before declining basically every year since. What happened in 1964? The science hadn’t changed; we have studies going back to the 30s linking lung cancer with smoking. What changed is the Surgeon General’s Report. Just this public acknowledgement by the powers-that-be of this link between smoking and cancer. You now have this mantle to make a difference by just informing the American public about the risk of cancer with processed meat. Godspeed.”

Let me end with my favorite diabetes educator, Dr. Caroline Trapp, who talked less about foods going in than foods coming out. “I’ve travelled here today from Michigan to speak to you about underconsumption of a nutrient of concern for public health: fiber. My number one concern is number two. Yes, I want to talk to you about constipation. Given the nutrient density of plant foods, the only source of dietary fiber, this committee could best improve the health of Americans in this way. Summarize your 800+ page report to the USDA/HHS with just one sentence: “All Americans are advised to consume a fiber-rich diet.” Let’s make America GO AGAIN.”

One on One with Klaus Mitchell

Alcohol and Your Health

0 responses to “2020 Dietary Guidelines and You”