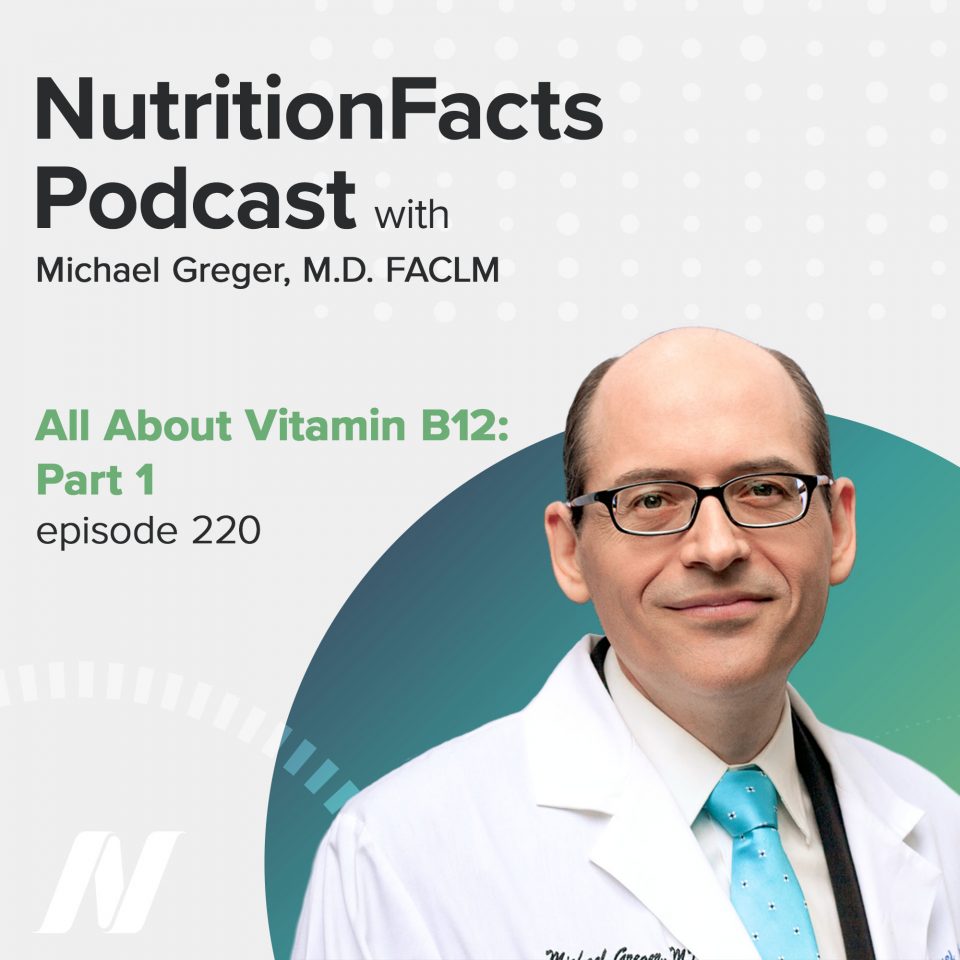 Today on the Nutrition Facts podcast, we explore all you’ve ever wanted to know about Vitamin B12 but were afraid to ask.

This episode features audio from The Symptoms of Vitamin B12 Deficiency and The Optimal Vitamin B12 Dosage for Adults. Visit the video pages for all sources and doctor’s notes related to this podcast.

Today, we bring you – B-12 – The Musical!! No – just kidding. There’s no singing and dancing on the podcast today. But we will bring you Part 1 of the story of this extremely important vitamin. Did you know that a B12 deficiency is so hard to diagnose because it masquerades as other conditions? Here’s our first story.

In 1853, a bedridden vegetarian was reported to experience a remarkable recovery upon eating meat. Probably didn’t help he was an opium addict, but he had been doing that for a decade. It was only after five years as a vegetarian did he end up bedridden, covered in bedsores, but a little beef and mutton and he was eventually up and about. Can’t blame the poor guy, as this was nearly a century before the discovery and identification of vitamin B12, resulting in just one of six separate Nobel prizes awarded for teasing out its structure and function. One of the most dramatic events in the history of medicine was the curing of pernicious anemia, a B12 deficiency disease––an otherwise fatal disorder––with a special diet centered around calf and beef liver.

Vitamin B12 levels start to drop within months of cutting out meat. Yes, there are all sorts of benefits of adopting a more plant-based diet, but underestimating the risk of developing a B12 deﬁciency nullify the health beneﬁts of a vegetarian diet, or even a diet centered around plant foods but contains meat only a few times a week. Even moderate amounts of animal products may not be sufficient to restore and maintain adequate vitamin B12 function.

Vitamin B12 is not made by plants. It’s not made by animals either, but rather microbes that blanket the earth. We presumably used to get B12 drinking out of a mountain stream or well water, based on studies showing vegetarians in developing countries who drink purified water appear to be at higher risk. But now, we chlorinate the water supply to kill off any bacteria. So, we don’t get a lot of B12 in our water anymore, but we don’t get a lot of cholera, either—that’s a good thing that we live in such a nice sanitary modern world. Vegetarians living in developing world slums appear to have fewer B12 problems. Basically, the more hygienic our meals, the less B12 we get. Our fellow great apes, like gorillas, get all the B12 they need eating their own feces; I prefer supplements.

Before getting into the nitty gritty of how much to take, how frequently, and which type is best, what are the symptoms of B12 deficiency?

What aren’t the symptoms of B12 deficiency? It’s known as “The Great Masquerader.” It can cause everything from abdominal distention and chronic diarrhea to shortness of breath and swollen red painful feet. It can also cause Parkinson’s syndrome-like symptoms, skin darkening that resolved with supplementation, and something I had never heard of before—bilateral useless hand syndrome.

The “Many Faces” of B12 deﬁciency include neurologic symptoms such as numbness and tingling in the hands and feet, muscle cramps, dizziness, cognitive disturbances, difficulty walking, erectile dysfunction, as well as fatigue and psychiatric symptoms like depression and even psychosis.

For example, a 47-year-old woman with a five-year history of psychosis, treated with antipsychotic drugs, cognitively impaired, reporting visual hallucinations, until finally her mother revealed that the patient was following a strict vegan diet for seven years. She started B12 supplements, and her symptoms went away. Years of her life lost in a psychotic haze, all apparently because she didn’t want to take a supplement. But vitamin B12 supplementation is mandatory for anyone eating plant-based diets.

Becoming psychotic is bad, but hey, better than falling into a coma, and not to mention, suddenly going blind with multiple organ failure––all thanks to B12 vitamin deficiency on a vegetarian diet. Looking into his eyes, they saw “exuberant haemorrhages” – he was bleeding into his eyes. You don’t have to be an ophthalmologist to recognize this is not what the back of your eyes should probably look like.

In our next story, we learn why the current Recommended Daily Allowance for vitamin B12 may be insufficient.

Compared to non-vegetarians, those removing meat from their diets tend to have healthier body weights, cholesterol, blood sugars, and blood pressures, with a lower mortality rate due to ischemic heart disease, the #1 killer of men and women. However, underestimating the importance of correct supplementation of vitamin B12 can nullify these beneﬁts. Currently, the ofﬁcial position of associations and governmental agencies is categorical and unequivocal: in the case of a vegetarian diet, even if you eat eggs and dairy—and, in fact, I would extend that to flexitarians eating a few servings of meat a week—supplementation of vitamin B12 is required.

Now, it’s not just those eating plant-based that should be concerned about getting enough B12. About one in three nonvegetarians aren’t getting enough for optimal health, and that may exceed half in women, especially when they’re pregnant. But this number could run as high as nearly 9 out of 10 among those eating strictly plant-based, and 10 out of 10 doing it long-term.

There are three groups of people who should ensure they have a regular, reliable source of vitamin B12 by supplementing their diet with vitamin B12-fortified foods or B12 supplements: those who’ve had bariatric surgery (which can sometimes impair absorption), those eating plant-based diets, and the more than a hundred million Americans older than age 50.

Why can’t you get regularly tested for signs of functional B12 deficiency, like getting your homocysteine or methylmalonic acid (MMA) level tested? Though those are nearly always elevated in cases of B12 deficiency, there are rare cases of severe B12 deficiency manifesting with normal B12 levels in the blood, normal MMA levels, and normal homocysteine. How do we know it was B12 deficiency? Because within months of B12 treatment, they made a remarkable recovery. So, best to just take it and not wait for symptoms to arise. The question is: how much, and how often?

Taking larger doses, like in supplement form, an even smaller fraction is absorbed. So, it might take a single oral dose of 10 micrograms to get that one microgram absorption. But just 10 a day failed to sufficiently lower homocysteine levels to under 10 even after a year; so, maybe we need to absorb more than that 1.6 micrograms every day for optimal health. The current RDA is primarily based on a 1958 study that just looked at a small number of patients, and only measured their blood counts. Absorbing one microgram a day may be enough to maintain blood cell production, but may not be sufficient for all the other things that vitamin B12 does.

“Based on the data of several vitamin B12 status biomarkers studies,” maybe the recommended intake for most adults should be raised to more like four, which is what you see for example in Europe, suggesting they want people to absorb at least two into their body every day. In that case you’d need to take more than 50 a day. And, now we have data suggesting getting seven a day may be even better. So, if you wanted to absorb 3.5 micrograms, half of the intake that may optimize functional B12 status, how much would you need to take in a single daily dose? This chart isn’t granular enough, but there’s a formula you can use to calculate it. U stands for uptake––absorption into your body––and D is your single daily dose. To absorb 3.5, you’d theoretically need to take a single daily dose of about 225, which I round in my recommendations to 250 a day.

Now, that’s just one of three methods you can use. A simpler and cheaper way is to take a single dose a week. If you want 3.5 in you a day, then you’d want to get at least 24.5 in you in a week. To get that in a single dose you’d have to theoretically take about 2,600, which I round in my recommendations to 2,500. Okay, but that’s theoretical. Maybe you need even more? On the contrary, a new study showed you can get away with even less. Just 50 a day (not 250, or 2,000 once a week, not 2,500) reliably brought blood levels up, and more importantly, normalized methylmalonic acid and homocysteine levels within a matter of months. So, based on this new study, I dropped my supplement recommendations down to that 50 a day or 2000 a week.