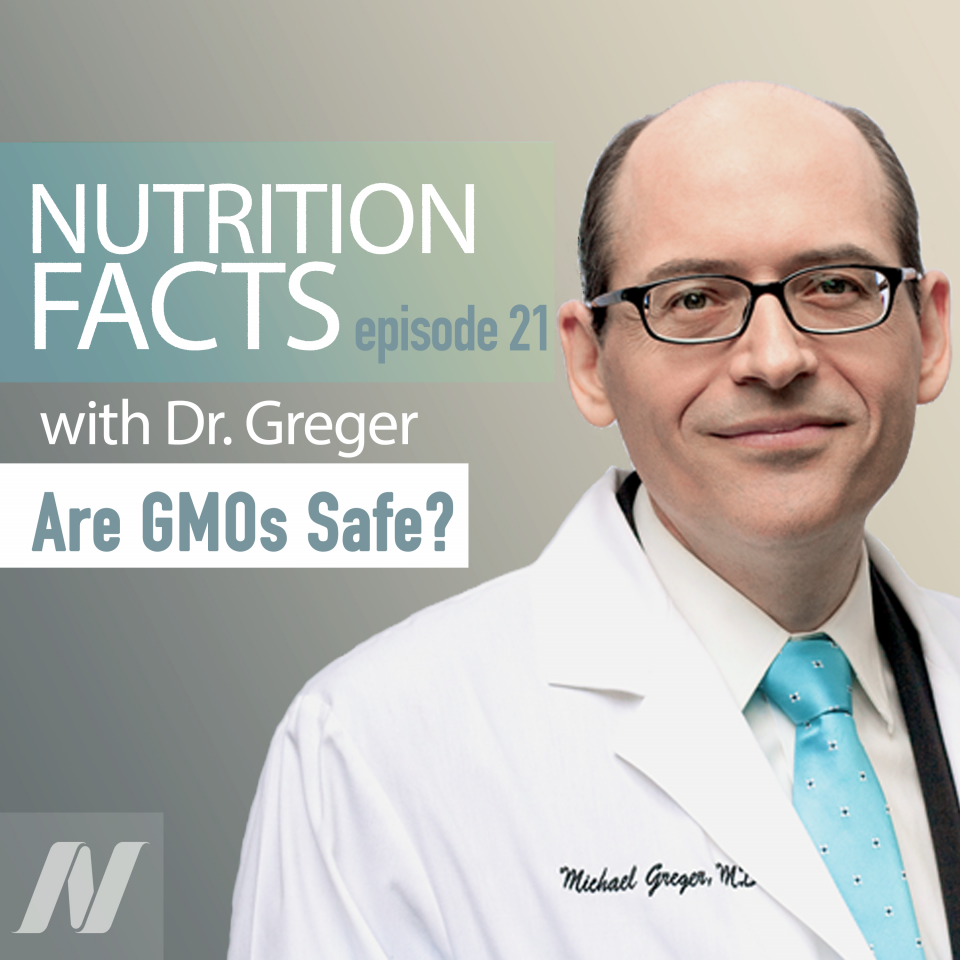 Much of the information about genetically modified crops is wrong—on both sides of the debate. So what does the best available evidence have to say about the health implications of GMOs?

Welcome to Nutrition Facts. I’m your host, Dr. Michael Greger – and I’m here to ask you – what is the most important decision you’ll make today? Is it – how you’ll get to work? Who you’ll set up a meeting with? What friend you’ll call for lunch?

Well. As it turns out – probably the most important decision you’ll make today – is what to eat. What we eat on a day-to-day basis is the number one determinant of our health and longevity. Literally. Most premature deaths in the United States are preventable – and related to nutrition.

So we’re going to explore some smart nutrition choices – based naturally on facts. Here we refer to the science, the research, the available data published in the peer-reviewed medical literature right now. That’s why I wrote my book “How Not to Die” – and why I created my nonprofit site NutritionFacts.org – and now this podcast.

Today we are going to look at the safety of GMOs, genetically modified organisms. As it turns out – their long-term safety remains an open question since so few human studies have been conducted. The greater concern may be the pesticides associated with GMOs, since 80% of GMO crops are bioengineered for pesticide resistance alone. Here’s the story.

There is debate on the direct threat of the inserted genes, as they are not detectable in the human body, but the real danger may come from pesticides associated with genetically modified foods. Genetically engineered seed biotechnology typically has not been used to increase crop yields, nutrition, or drought tolerance but instead for profitable pesticide-resistant products. 80% of GMO crops are bioengineered only for pesticide resistance. Not surprising, given that the top 5 biotech companies are chemical companies that manufacture pesticides.

This allows farmers to spray herbicides directly onto the crops, raising a theoretical possibility that the level of residues of the herbicide on food we buy at the supermarket may have increased. Or at least it was theoretical, until now.

Monsanto’s Roundup Ready soybeans are the #1 GM crop, genetically engineered to be resistant to the herbicide Roundup—also sold by Monsanto—allowing farmers to spray fields with the Roundup herbicide glyphosate, which then kills the weeds while leaving the soy standing.

Monsanto maintains that Roundup Ready soybeans are compositionally equivalent to that of conventional soy, a concept that is used to argue that GMO foods are therefore as safe as non-GMO, but Monsanto didn’t report the level of pesticide residues. In fact, some of the comparison tests were done on Roundup Ready soybeans that hadn’t been sprayed at all, which is the whole point of having Roundup Ready plants so you can spray them with Roundup. In contrast to real-life samples from the market, transgenic crops intended for scientific studies are often produced without the application of herbicides or at doses lower than those typically used by farmers. It wasn’t until this study was published in 2014 when the full composition of ready-to-market soybeans were analyzed.

Recently the prominent science journal, Nature, editorialized that we are now swimming in information about genetically modified crops, but that much of the information is wrong—on both sides of the debate. “But a lot of this incorrect information is sophisticated, backed by legitimate-sounding research and written with certitude,” adding that with GMOs, “a good gauge of a statement’s fallacy is the conviction with which it is delivered.”

To many in the scientific community, GMO concerns are dismissed as one big conspiracy theory. In fact one item in a psychological test of belief in conspiracy theories asked people if they thought food companies would have the audacity to be dishonest about genetically modified food. The study concluded that many people were cynical and skeptical with regard to advertising tricks, as well as the tactics of organizations like banks and alcohol, drug, and tobacco companies. That doesn’t sound like conspiracy theory, that sounds like doing business.

Minorities are blamed for conspiracist ideation for crackpot theories about AIDS, but we must remember there is a long legacy of scientific misconduct. Throw in a multi-billion dollar industry, and one can imagine how hard it is to get to the truth of the matter about GMOs. There are social, environmental, economic, food security, and biodiversity arguments, pro and con about GMOs, but those are outside my area of expertise so I’m going to stick to food safety, and as a physician I’m a rather limited veterinarian, in that I only know one species, human beings, so will skip the lab animal data, which may inform what to feed one’s pet rat, but not necessarily what to feed one’s family. What human data do we have about GMO safety?

DNA from genetically modified crops can be transferred into humans who eat them, but that’s not what the study found, just that plant DNA in general may be found in the human bloodstream with no stipulations of harm.

Of course, why get GMOs second-hand when you can get them directly? The next great frontier is transgenic farm animals. A genetically modified salmon was first to vie for a spot at the dinner table. And then in 2010, transgenic cows, sheep, goats and pigs were created, genetically modified for increased muscle mass, Frankenfurters one might say, based on the so-called mighty mouse model.

But back to children of the corn and their mothers. When they say it’s a toxin, it’s a toxin to corn worms, not necessarily to people. In fact, I couldn’t find any data linking BT toxin to human harm, which is a good thing since it’s considered one of the few pesticides considered so non-toxic, it is sprayed on organic fruits and vegetables.

Let’s put the hormonal effects of the Roundup pesticide on GMO soy, into perspective.

In response to concerns raised about the toxicity of Monsanto’s Roundup pesticide, which ends up in GMO foods, Monsanto’s scientists countered that these in vitro experiments used physiologically irrelevant concentrations, meaning dripping Roundup on cells in a petri dish at levels far above what would be realistically found in the human body.

Sure, it’s probably not a good idea to mix up your alcohol with your Roundup and chug the stuff, or try to commit suicide by drinking it, or injecting it into you. And the rare cases of Parkinson’s reported were after getting directly sprayed with the stuff, or working for years in a pesticide production plant, but that’s not your typical consumer exposure.

Some of the researchers responded to the accusation saying look, we used the kinds of concentrations that are used out in the fields. Therefore every little droplet you spray worldwide is above the threshold concentration we found caused adverse effects. Monsanto’s folks responded saying yes, that’s the concentration we spray, but that’s not the concentration that human cells are bathing in. Once it gets into drinking water or food, it’s highly diluted. And, they’re quick to point out, if you look at people with the greatest exposure—pesticide workers—the vast majority of studies show no link between the use of Roundup and cancer or non-cancer diseases. There are a few suggestive findings suggesting a link with non-Hodgkins lymphoma. One study of pesticide applicators suggested an association with multiple myeloma, and one study of the children of pesticide applicators found a tentative association with ADHD, but again these are folks expected to have a much greater exposure level than the general population that may just get a few parts per million in their food. But there had never been any studies done on the tiny levels found circulating in people’s bodies, until now.

The maximum residue levels are set at parts per million. The concentrations found within human bodies is measured in parts per billion. Glyphosate can activate estrogen receptors at a few parts per trillion, increasing the growth of estrogen receptor positive human breast cancer cells in a petri dish. These results indicate that truly relevant concentrations of the pesticide found on GMO soybeans possesses estrogenic activity.

That may be because most GMO soy in the U.S. is fed to chickens, pigs, and cows—it’s used for livestock feed, whereas most of the major soy food manufacturers use non-GMO soy. Or it could be because the benefits of eating any kind of soy may far outweigh the risks, but why accept any risk at all when you can choose organic soy products, which by law exclude GMOs.

The bottom line is that there is no direct human data suggesting harm from eating GMOs, though in fairness such studies haven’t been done, which is exactly the point, critics counter. That’s why we need mandatory labeling on GMO products so that public health researchers can track whether GMOs are having any adverse effects.

It is important to put the GMO issue in perspective, though. As I’ve shown, there are dietary and lifestyle changes we can make that could eliminate most heart disease, strokes, diabetes, and cancer. Millions of lives could be saved. A healthy enough diet can even reverse our #1 killer, heart disease. So I’m sympathetic to the biotech industry’s exasperation about GMO concerns when we still have people dropping dead from everything else they’re eating. As one review concluded “Consumption of genetically modified food entails risk of undesirable effects… similar to the consumption of traditional food. In other words, choosing the non-GMO Twinkie isn’t doing our body much of a favor.

To see any graphs charts, graphics, images or studies mentioned here, please go to the Nutrition Facts Podcast landing page. There you’ll find all the detailed information you need – plus links to all of the sources we cite for each of these topics.

Everything on the website is free. There’s no ads, no corporate sponsorship. It’s strictly non-commercial. I’m not selling anything. I just put it up as a public service, as a labor of love—as a tribute to my grandmother – whose own life was saved with evidence-based nutrition.

How Much is Enough Protein?