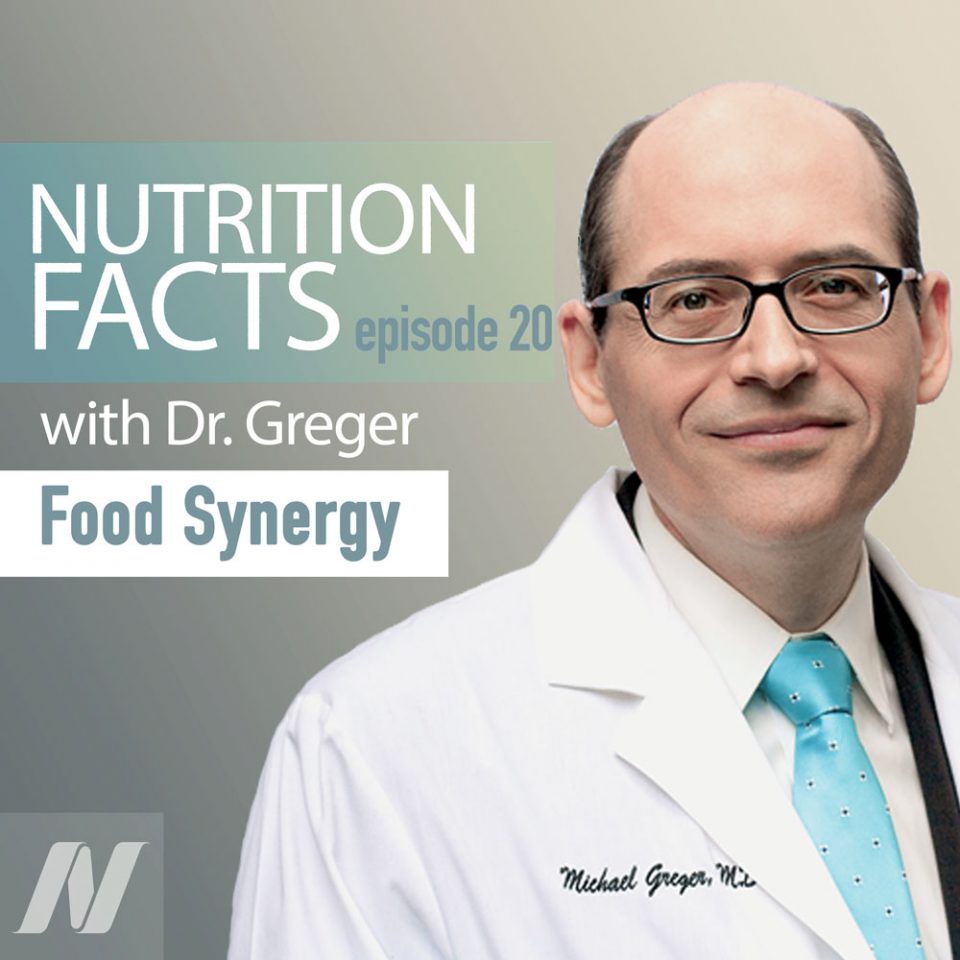 In today’s episode, we explore the health benefits of eating a variety of foods in different combinations.

This episode features audio from Food Synergy, Industry Response to Plants Not Pills, and The Protein-Combining Myth.

Today, we take a close look at food synergy, the process by which the nutrients in foods can have varying effects when eaten in different combinations.  There are thousands of phytochemicals that will never make it onto the side of a cereal box, but may play a role in reducing the risk of chronic diseases and that’s just the ones we know about.  We know whole plant foods have consistently been found to be protective and, so, it’s reasonable for scientists to try to find the magic bullet active ingredient to sell it in a pill.  But, pills simply cannot mimic this balanced natural combination of phytochemicals present in fruits and vegetables.  When isolated out, compounds may lose their activity, or behave differently.  The antioxidant and anticancer activities of plant foods is thought to derive from the additive or synergistic effects, meaning the whole may be greater than the sum of its parts.  This helps explain why a pill simply cannot replace the complex interaction of phytochemicals present in whole plant foods.

As T. Colin Campbell has pointed out, more than a hundred trials overwhelmingly show no long-term benefit of vitamin supplements, along with worrisome findings that certain supplements may even increase risk for diabetes, heart disease, and cancer.  Supplementation with fish oil appears useless or worse.  Yet, the science doesn’t seem to matter.  People continue to buy it.  The public desire for quick fixes through pills is overwhelming, especially when money can be made.

Each plant has thousands of different phytochemicals, and each plant has a whole different phytonutrient profile and, so, there may be synergistic effects when consuming different foods together, as well.  Just like eating beta-carotene in carrot form is more beneficial than in pill form, because of all the other compounds in the carrot that may synergize with the beta-carotene.  When you dip that carrot in hummus, all of a sudden you have the thousands of carrot compounds mixing with the thousands of chickpea compounds and that’s what this study was all about.  What happens if you mix different fruits, with different vegetables, with different beans?

What about anticancer effects?  What if you repeated this study, but this time tried dripping different combinations of foods on breast cancer cells growing in a Petri dish?  Sometimes, you can get the same synergistic effects.  Here’s what grapes can do to breast cancer cells, suppressing their growth about 30% but, onions worked even better, cutting breast cancer growth in half.  Now, if you added half of each together, you’d assume you’d get somewhere in the middle between the two, right, they’d average each other out.  But, instead, the researchers got this, suppressing cancer cell growth by up to like 70%.

So, the whole plus the whole was greater than the sum of the whole parts.  So, did they recommend people eat a variety of foods?  Maybe add some raisins along with some chopped red onion to your next salad?  Where’s the money in that?  No. The reason they were investigating the different types of interactions was to identify mixtures that could ultimately lead to the development of something like grape-flavored Funyuns or something.

If the whole food is greater than the sum of its parts, then this is a cautionary tale of unscrupulous marketers.  It seems that some dietary supplements that may do more harm than good.

This is the famous study that started so many down the wrong track.  Thousands of men followed for 19 years, and there was a stepwise drop in the risk of lung cancer for smokers that got more and more beta-carotene in their diet, which they just estimated by adding up how much fruit, vegetables and soup they ate.  So, did they start treating smokers with fruit, veggies, and soup?  No, they gave them beta-carotene pills and those taking the pills got more lung cancer than those that didn’t and more deaths from lung cancer, heart disease, and stroke, and a shorter average lifespan overall.  Didn’t stop them from trying it over and over again, though.

Six more studies performed and beta-carotene pills continued to increase mortality.  Twenty other studies, in which they gave beta-carotene and other antioxidant supplements, significantly increased mortality.  An obvious conclusion is that isolated nutrients are drugs, but not studied or regulated as drugs, and perhaps they should be.  Food, on the other hand, needs to be treated in a different way, cognizant of the food synergy concept.  The whole food is greater than the sum of its parts.

Yes, the more carotenoids we have in our blood, the healthier we may be, but though unscrupulous marketers may use this to sell dietary supplements, responsible scientists and food producers need to emphasize the use of foods and whole food products to improve blood carotenoid concentrations.

We can now see that giving supplements of beta-carotene was a misguided way to prevent cancer.  Instead, researchers maybe should have sought to determine which foods worked best and then put fruits and veggies to the test in randomized controlled trials.

Science tends to be reductionist, looking for discrete causes and effects.  It is hard to get food studies past peer grant reviewers unless they take the food apart, which seems to us to miss the point.  The key is to encourage consumers to increase the total amount to 9 to 13 servings of fruits and vegetables every day.

The past 30 years have seen the development of an enormous body of evidence on the importance of plant-based foods in preventing or reducing the risk of chronic disease.  But, despite broadly disseminated public information programs on how to eat healthfully, it is extremely difficult to get people to change their diets.  Therefore, one proposed solution is to add back the health-promoting phytonutrients that are missing from many convenience foods.  By adding more fruits and vegetables?  No, silly, by genetically engineering phytonutrients into fast food.

People eat ketchup, not kale, so who needs greens when you can genetically engineer high-folate tomatoes.  Why buy berries when you make tomatoes purple by stitching in two genes from snapdragons to make transgenic tomatoes.  Instead of soybean burgers, we can have soybean genes in the ketchup on our burger and, you’ve heard of grape tomatoes–how about really grape tomatoes?

Pills are more profitable than plants but when pills don’t work, industry will try patenting the produce itself.

You remember that myth that plant proteins are incomplete, like you have to eat rice with beans?  As it turns out, that was debunked by the scientific nutrition community decades ago.

All nutrients come from the sun or the soil.  Vitamin D, the sunshine vitamin, is created when skin is exposed to sunlight.  Everything else comes from the ground.  Minerals originate from the earth, and vitamins from the plants and micro-organisms that grow from it.

The calcium in a cow’s milk (and her 200-pound skeleton) came from all the plants she ate, which drew it up from the soil.  We can cut out the middle-moo, though, and get calcium from the plants directly.

The concept that plant protein was inferior to animal protein arose from studies performed on rodents more than a century ago.  Scientists found that infant rats don’t grow as well on plants but infant rats don’t grow as well on human breast milk either.  So, does that mean we shouldn’t breastfeed our babies?  Ridiculous!  They’re rats.  Rat milk has ten times more protein than human milk, because rats grow about ten times faster than human infants.

It is true that some plant proteins are relatively low in certain essential amino acids.  So, about 40 years ago, the myth of protein combining came into vogue—literally, the February ‘75 issue of Vogue magazine.  The concept was that we needed to eat complementary proteins together, for example, rice and beans, to make up for their relative shortfalls.  This fallacy was refuted decades ago.  The myth that plant proteins are incomplete, that plant proteins aren’t as good, that one has to combine proteins at meals.  These have all been dismissed by the nutrition community as myths decades ago, but many in medicine evidently didn’t get the memo.

Dr. John McDougall called out the American Heart Association for a 2001 publication that questioned the completeness of plant proteins.  Thankfully, though, they changed and acknowledged now that plant proteins can provide all the essential amino acids, no need to combine complementary proteins.

It turns out our body is not stupid; it maintains pools of free amino acids that can be used to do all the complementing for us, not to mention the massive protein recycling program our body has.  Some 90 grams of protein are dumped into the digestive tract every day from our own body to get broken back down and reassembled, and so our body can mix and match amino acids to whatever proportions we need, whatever we eat, making it practically impossible to even design a diet of whole plant foods that’s sufficient in calories, but deficient in protein.  Thus, plant-based consumers do not need to be at all concerned about amino acid imbalances from the plant proteins that make up our usual diets.