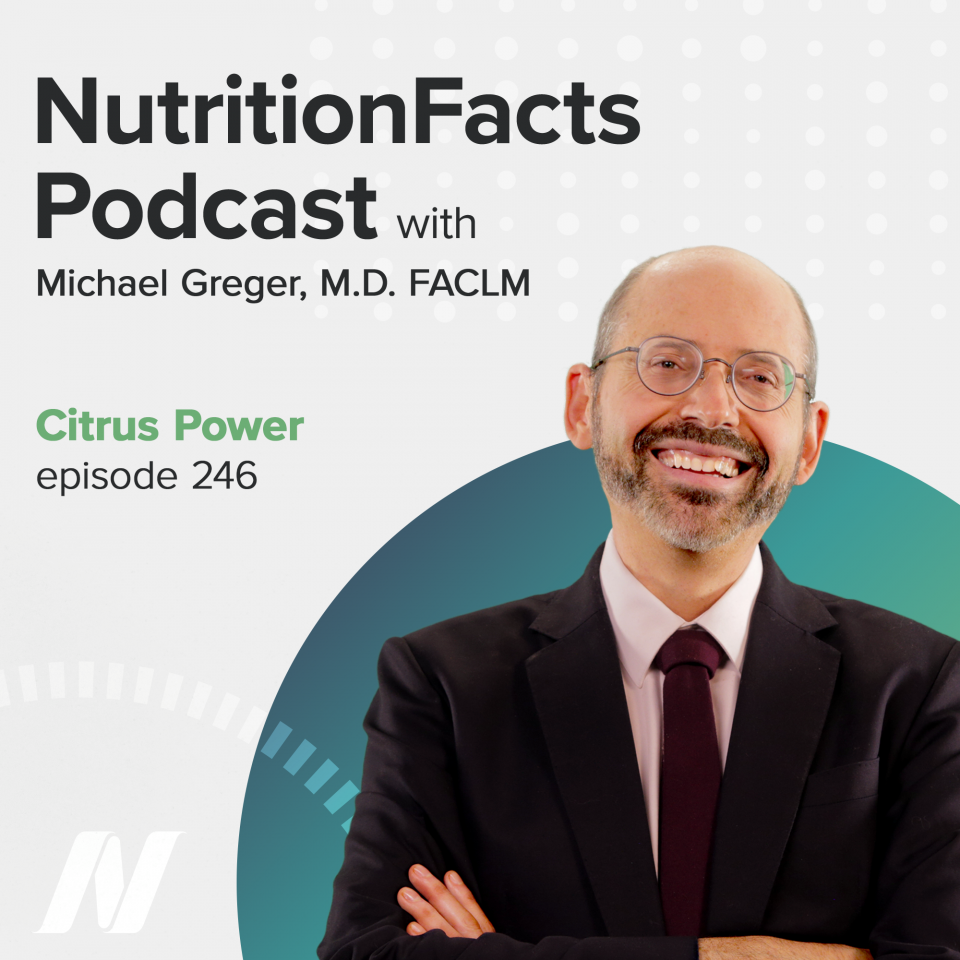 Want to boost your DNA repair, warm your hands, and avoid muscle fatigue? You’re in the right place. This episode features audio from Citrus Peels & Cancer: Zest for Life?, Keeping your Hands Warm with Citrus, and Reducing Muscle Fatigue with Citrus. Visit the video pages for all sources and doctor’s notes related to this podcast.

It’s crazy when you think about all of the different kinds of foods we eat.  We just swallow – and hope it all works out for the best. Well – it turns out there are better ways to think about keeping our bodies humming healthfully along. Welcome to Nutrition Facts – I’m your host Dr. Michael Greger.

Today – we discover the powerful properties of citrus. I’m talking lemons, limes, citrons, bitter oranges, grapefruits, pomelos, mandarins, clementines,…kumquats. Actually, one of my favorite citrus fruits is the kumquat – because you can eat the whole fruit – peel and all! Which is ideal – because the DNA repair enzyme-boosting powers of citrus are concentrated in the peel.

New data demonstrating a DNA protective agent present in at least some fruits and vegetables found that the agent was heat sensitive and determined it was not vitamin C. This was confirmed in a study that tried vitamin C directly and found no effect on DNA protection and repair of DNA strand breaks.

The carotenoid beta cryptoxanthin, found primarily in citrus, seems to be at least one candidate. If you expose cells to a mutagenic chemical, you can cause physical breaks in the strands of DNA, but in less than an hour, our DNA repair enzymes can weld most of our DNA back together. But if you add some of that citrus phytonutrient, you can effectively double the speed at which the DNA is repaired. But this is all just cells in a petri dish, what about in a person?

If you have people drink a glass of orange juice and draw their blood two hours later, the DNA damage you can induce with an oxidizing chemical drops, whereas if they just had like orange Kool-Aid, it didn’t help.

So, do people who eat more fruit walk around with less DNA damage? Yes, particularly in women. Does this actually translate into lower cancer rates? Yes, it appears so; citrus alone is associated with a 10% reduction in odds of breast cancer.

Given to newly diagnosed breast cancer patients, citrus phytonutrients were found to concentrate in breast tissue, though many complained of “citrus burps” due to the concentrated extract they were given; so, researchers evaluated topical application as an alternative dosing strategy, recruiting women to apply orange-flavored massage oil to their breasts daily. This request was met with excellent compliance, but it didn’t work. We actually have to eat our food.

Though orange juice consumption was found protective against childhood leukemia, it was not found protective against skin cancer. However, the most striking feature was the protection purported by citrus peel consumption. Who eats orange peels? Lots of people evidently. Just drinking orange juice may increase the risk of the most serious type of skin cancer. Daily consumption was associated with a 60% increase in risk; so again, better to stick with the whole fruit. And you can eat citrus extra-whole by zesting some of the peel into your dishes.

Next – we look at how phytonutrients in citrus, such as hesperidin, increase blood flow sufficiently to warm the hands and feet of those with cold sensitivity.

In 1936, Albert Szent-Györgyi, who won the Nobel Prize for discovering vitamin C, described a “vitamin P,” which we now know encompasses a class of thousands of phytonutrients called flavonoids. Some, like quercetin, are “widespread in plant-based foods.” You can tell something is widespread in the plant kingdom when you can even find it in iceberg lettuce.

Others, however, are only found in specific plant families. For example, hesperitin is “found primarily in citrus fruits.” This may be one of the reasons that, out of all the different types of fruit that have been looked at, citrus may help cut our risk of stroke the most.

The citrus phytonutrient hesperitin increases blood flow. Using a machine called a Doppler fluximeter, you can measure blood flow through the skin using a laser beam. A laser Doppler fluximeter; sounds like something from Back to the Future. And, if you give people the amount of hesperitin found in two cups of orange juice, blood flow goes up, though if you instead just give them the orange juice itself, that works even better. So, there’s other beneficial stuff besides just the hesperitin in citrus.

For example, if you measure the changes in genetic expression, orange juice consumption induces changes in expression in 3,000 of our genes—whereas hesperitin alone only modulated the expression of about 2,000. Still, nearly 2,000 stretches of our DNA expressed differently because we consumed just one of the thousands of phytonutrients in plants—pretty mind-blowing.

And, these changes in blood flow are not just kind of “in theory.” Researchers have taken volunteers with cold sensitivity—cold hands, cold feet—put them in an air-conditioned room, and measured the temperature of their fingertips after drinking a placebo drink—like orange Kool-Aid—versus drinks with two doses of actual citrus phytonutrients. In the Kool-Aid group, their fingers got colder and colder, dropping nearly 9 degrees Fahrenheit. But, the fingers of those consuming low or high doses of citrus didn’t get as much colder. That’s because their blood flow remained steady. Here’s that laser test again.

When we’re exposed to cold temperatures, our body starts to clamp off peripheral blood flow to keep our core warm. But, if you eat a bunch of oranges before you go skiing, your risk of frostbite may go down, since you’re keeping up your blood flow to your fingers and toes.

Now, if we train, we can increase the number of blood vessels in our muscles, and clear out the lactate faster. For example, if you take some overweight sedentary women and start them on an aerobic training program of running and walking, at the end of three months, their lactate levels during exercise decreased 17%. But, those on the same program who drank two cups of orange juice a day decreased their levels 27%. They did the same exercise program, but the citrus group experienced “a significant decrease in blood lactate concentration”—signifying “an improvement in physical performance, with less muscle fatigue.”

I don’t recommend drinking juice, because you’re losing all that wonderful fiber that slows the rate of fruit sugar absorption into our system.

So, the whole fruit is nearly always better than fruit juice. Now, this is not to say OJ isn’t better than Coke. OJ has those citrus phytonutrients, like hesperidin, which may be why the women’s triglycerides didn’t go up, even though they were drinking two cups of fruit juice every day. Hesperidin may actually help lower our digestion of fats, but once you get up to three cups a day of juice, you can really start bumping up your triglycerides.

An Aspirin a Day?