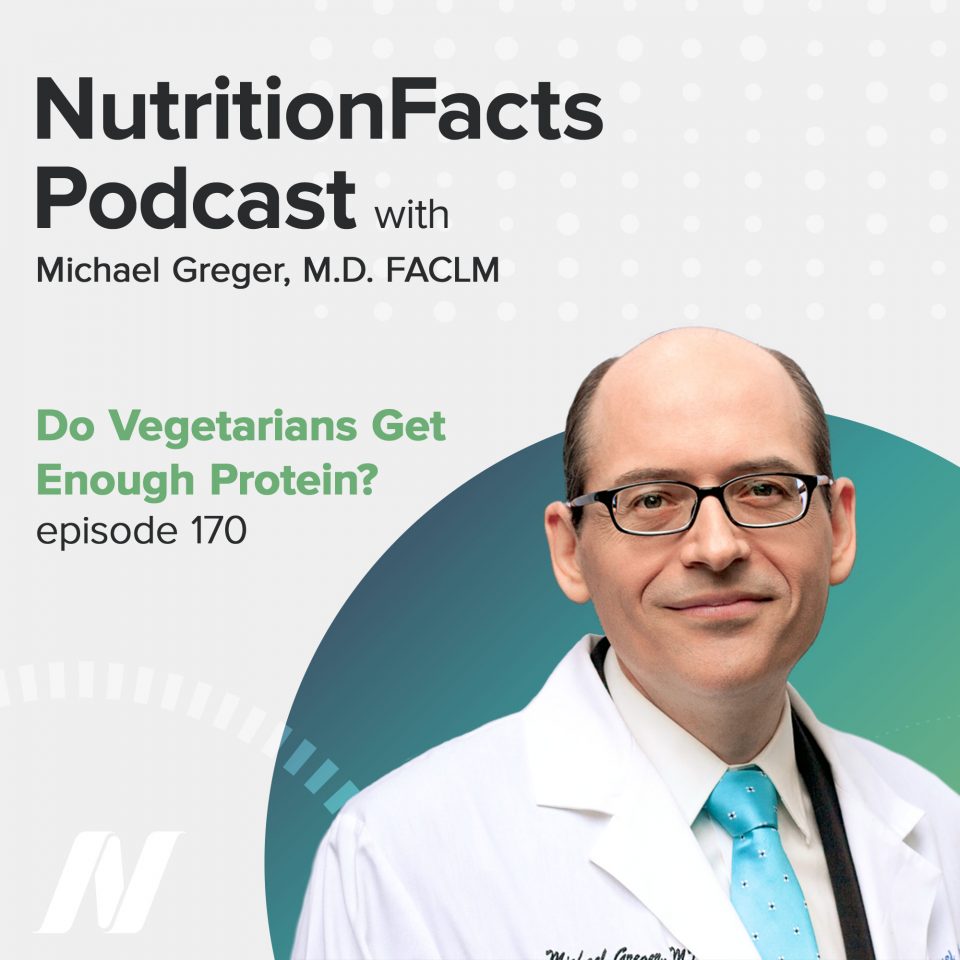 It’s a commonly held myth that vegetarians come up short when it comes to getting enough protein. On today’s show – we look at the facts.

This episode features audio from Do Vegetarians Get Enough Protein?, The Protein-Combining Myth, and Plant Protein Preferable. Visit the video pages for all sources and doctor’s notes related to this podcast.

It’s a commonly held belief that vegetarians come up short when it comes to getting enough protein. On today’s show, we look at the facts.   In our first story, we look at nutritional quality indices that show plant-based diets are the healthiest.  But do vegetarians and vegans reach the recommended daily intake of protein?

The largest study in history of those eating plant-based diets recently compared the nutrient profiles of about 30,000 non-vegetarians to 20,000 vegetarians, and about 5,000 vegans, flexitarians, and no meat except fish-eaters, allowing us to finally put to rest the perennial question, “Do vegetarians get enough protein?” The average requirement is 42 grams of protein a day. Non-vegetarians get way more than they need, and so does everyone else. On average, vegetarians and vegans get 70% more protein than they need every day.

Surprising that there’s so much fuss about protein in this country when less than 3% of adults don’t make the cut, presumably folks on extreme calorie-restricted diets who just aren’t eating enough food, period. But 97% of Americans get enough protein.

There is a nutrient, though, for which 97% of Americans are deficient. Now, that’s a problem nutrient. That’s something we really have to work on. Less than 3% of Americans get even the recommended minimum adequate intake of fiber. So, the question isn’t “Where do you get your protein?” but “Where do you get your fiber?” We only get about 15 grams a day. The minimum daily requirement is 31.5, so we get less than half the minimum. If you break it down by age and gender, after studying the diets of 12,761 Americans, the percentage of men between ages 14 and 50 getting the minimum adequate intake? Zero.

“This deficit is stunning in that dietary fiber has been protectively associated with the risk of diabetes, metabolic syndrome, cardiovascular disease,  obesity, and various cancers as well as high cholesterol, blood pressure, and blood sugars. Therefore, it is not surprising that fiber is now listed as a nutrient of concern in the Dietary Guidelines,”  Protein is not.

“One problem is that most people have no idea what’s in their food; more than half of Americans think steak is a significant fiber source.”

By definition, fiber is only found in plants. There is no fiber in meat, dairy, or eggs, and little or no fiber in junk food. Therein lies the problem. Americans should be eating more beans, vegetables, fruits, whole grains how are we doing on that? Well, 96% of Americans don’t eat the recommended minimum daily intake of beans.  96% don’t eat the measly minimum for greens. 99% don’t get enough whole grains. Look at these numbers. Nearly the entire U.S. population fails to eat enough whole plant foods. And, it’s not getting any better; a “lack of progress that’s disappointing.”

Even semi-vegetarians, though, make the minimum for fiber. And those eating completely plant-based diets triple the average American intake. Now, when closing the fiber gap, you’ll want to do it gradually, no more than about five extra grams of fiber a day each week, until you can work your way up.

But it’s worth it. “Plant-derived diets tend to contribute significantly less fat, saturated fat, cholesterol, and foodborne pathogens, while at the same time offering more fiber, folate, vitamin C, and phytochemicals; all essential factors for disease prevention, and optimal health and well-being.”

And, the more whole plant foods, the better. If you compare the nutritional quality of “vegan vs. vegetarian, semi-vegetarian, pesco-vegetarian and omnivorous diets, traditional healthy diet-indexing systems, like compliance with the dietary guidelines, consistently indicate the most plant-based diet as “the most healthy one.”

In our next story we look at the myth that plant proteins are incomplete, necessitating protein combining.

All nutrients come from the sun or the soil. Vitamin D, the “sunshine vitamin,” is created when skin is exposed to sunlight. Everything else comes from the ground. Minerals originate from the earth, and vitamins from the plants and micro-organisms that grow from it.

The calcium in a cow’s milk (and her 200-pound skeleton) came from all the plants she ate, which drew it up from the soil. We can cut out the middle-moo, though, and get calcium from the plants directly.

The concept that plant protein was inferior to animal protein arose from studies performed on rodents more than a century ago. Scientists found that infant rats don’t grow as well on plants. But infant rats don’t grow as well on human breast milk either; so, does that mean we shouldn’t breastfeed our babies? Ridiculous! They’re rats. Rat milk has ten times more protein than human milk, because rats grow about ten times faster than human infants.

It is true that some plant proteins are relatively low in certain essential amino acids. So, about 40 years ago, the myth of “protein combining” came into vogue literally, the February ‘75 issue of Vogue magazine. The concept was that we needed to eat “complementary proteins” together, for example, rice and beans, to make up for their relative shortfalls. This fallacy was refuted decades ago. The myth that plant proteins are incomplete, that plant proteins aren’t as good, that one has to combine proteins at meals. These have all been dismissed by the nutrition community as myths decades ago, but many in medicine evidently didn’t get the memo. Dr. John McDougall called out the American Heart Association for a 2001 publication that questioned the completeness of plant proteins. Thankfully though, they’ve changed and acknowledged now that, “Plant proteins can provide all the essential amino acids, no need to combine complementary proteins.”

It turns out that our body is not stupid.  It maintains pools of free amino acids that it can use to do all the complementing for us, not to mention the massive protein recycling program our body has. Some 90 grams of protein are dumped into the digestive tract every day from our own body to get broken back down and reassembled, and so our body can mix and match amino acids to whatever proportions we need, whatever we eat, making it practically impossible to even design a diet of whole plant foods that’s sufficient in calories, but deficient in protein. Thus, plant-based consumers do not need to be at all concerned about amino acid imbalances from the plant proteins that make up our usual diets.

The dietary recommendations of countries that rely on their health departments to formulate them, rather than their agriculture departments, more closely parallel the recommendations of academics, such as Walter Willet, the chair of Harvard’s nutrition department, who, in his “Essentials of healthy eating  guide,” talks about picking the best “protein packages,” recognizing that food is a package deal. And so, one of his top three recommendations that we should emphasize is plant sources of protein, rather than animal sources.

See, to the metabolic systems engaged in protein production and repair, it doesn’t matter whether amino acids come from animal or plant protein.

However, protein is not consumed in isolation. Instead, it is packaged with a host of other nutrients. The quality and amounts of fats, carbohydrates, sodium, and other nutrients in the ‘‘protein package’’ may influence long-term health. For example, results from the Harvard Nurses’ Health Study suggest that eating more protein from beans, nuts, seeds, and the like while cutting back on refined carbohydrates like white flour reduces the risk of heart disease.

So, the bottom line? Go with plants. Eating a plant-based diet is healthiest.

What’s Up with Energy Drinks