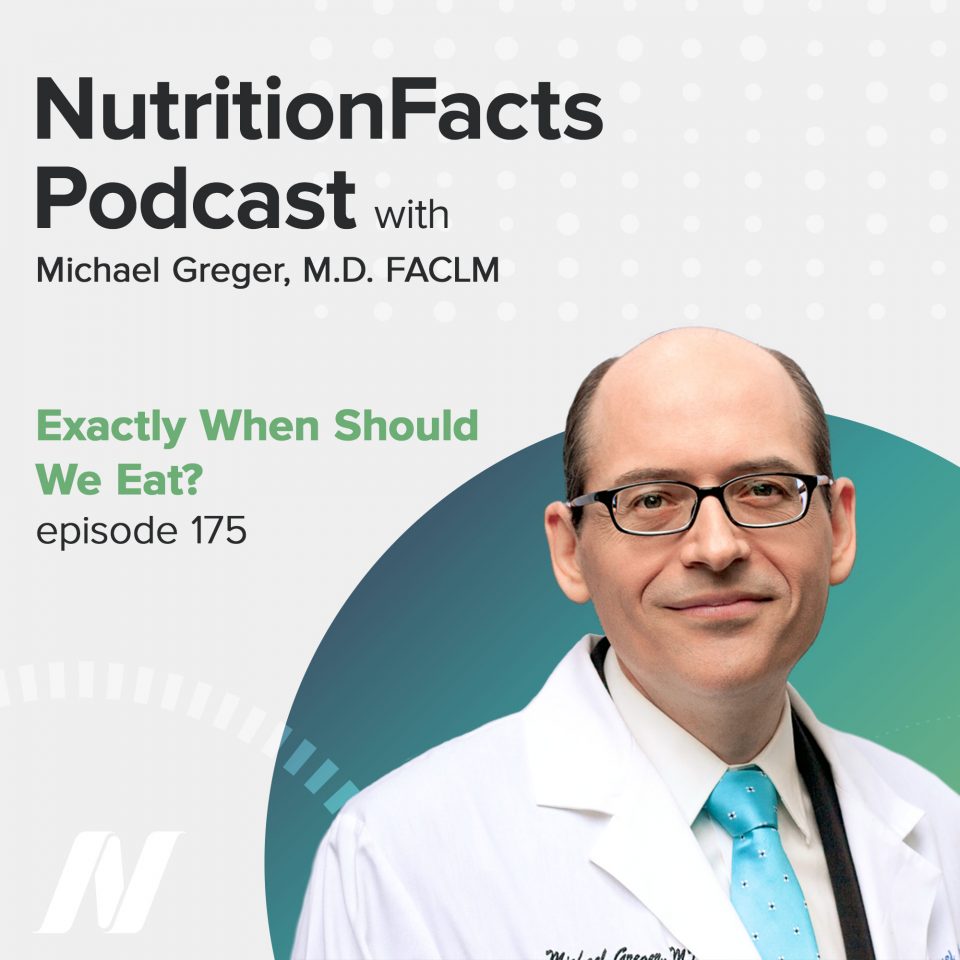 Weight loss can be even more challenging if we’re eating at the wrong time of day.

What we eat is most important, but when we eat can make a difference too. In our first story, we put time restricted eating to the test.

The reason many blood tests are taken before eating after an overnight fast is that meals can tip our system out of balance, bumping up certain biomarkers for disease such as blood sugars, insulin, cholesterol, and triglycerides. Yet fewer than 1 in 10 Americans may even make it 12 hours without eating. As evolutionarily unnatural as eating three meals a day is, most of us are eating even more than that. One study using a smartphone app to record more than 25,000 eating events found that people tended to eat about every 3 hours over an average span of about 15 hours a day. Might it be beneficial to give our bodies a bigger break?

Time-restricted feeding is “defined as fasting for periods of at least 12 hours but less than 24 hours.” This involves trying to confine calorie intake to a set window of time, typically 3–4 hours, 7–9 hours, or 10–12 hours a day, resulting in a daily fast lasting 12-21 hours. When mice are restricted to a daily feeding window, they gain less weight even when fed the exact same amount. Rodents have such high metabolisms, though, that a single day of fasting can starve away as much as 15 percent of their lean body mass. This makes it difficult to extrapolate from mouse models. You don’t know what happens in humans until you put it to the test.

The drop-out rates in time-restricted feeding trials certainly appear lower than most prolonged forms of intermittent fasting, suggesting it’s more easily tolerable. But does it work? If you have people even just stop eating between 7 p.m. and 6 a.m. for two weeks, they lose about a pound each week, compared to no time restriction. Note: no additional instructions or recommendations were given on the amount or type of food consumed; no gadgets, calorie counting, or record-keeping. They were just told to limit their food intake to the hours of 6 a.m. through 7 p.m., a simple intervention, easy to understand and implement.

The next logical step was to try putting it to the test for months instead of just weeks. Obese men and women were asked to restrict eating to the eight-hour window between 10 a.m. and 6 p.m. Twelve weeks later, they had lost seven pounds. This deceptively simple intervention may be operating from a number of different angles. People tend to eat more food later in the day, and higher-fat foods later in the day. By eliminating eating in the late evening hours, one removes prime-time snacking on the couch, a high-risk time for overeating. And indeed, during the no-eating-after-7-p.m. study, the subjects were inadvertently eating about 250 fewer calories a day. Then, there are also the chronobiological benefits of avoiding late-night eating.

I’m going to do a whole series of videos about the role our circadian rhythms have in the obesity epidemic, how the timing of meals can be critical, and how we can match meal timing to our body clocks. Just to give you a taste, the exact same number of calories at dinner is significantly more fattening than the same number of calories eaten at breakfast.

What about the fasting component of time-restricted feeding? There’s already the double benefit of fewer calories and avoiding night-time eating. Does the fact that you’re fasting for 11 or 16 hours a day play any role, considering the average person may only make it about 9 hours a day without eating? How would you design an experiment to test that? What if you randomized people into two groups, and forced both groups to eat the same number of calories a day and both to eat late into the evening, but with one group fasting even longer—20 hours? That’s exactly what researchers at the USDA and National Institute of Aging did.

Men and women were randomized to eat three meals a day, or to fit all those same calories into a four-hour window between 5 p.m.  and 9 p.m.  and fast the rest of the day. If the weight-loss benefits from the other two time-restricted feeding studies was due to the passive calorie restriction or avoidance of late night eating, then presumably both these groups should end up the same, because they’re both eating the same amount, and they’re both eating late. But that’s not what happened. After eight weeks, the time-restricted feeding group ended up with nearly five pounds less body fat. About the same number of calories, but they lost more weight. A similar study with an eight-hour window resulted in three pounds more fat loss. So, there does seem to be something to giving your body daily breaks from eating around the clock.

Because that four-hour window was at night, though, they suffered the chronobiological consequences—significant elevations in blood pressures and cholesterol levels—despite the weight loss. The best of both worlds was demonstrated in 2018: early time-restricted feeding, eating with a narrow window earlier in the day.

In our next story, we look at how calories in the morning count less and are healthier.

Time-restricted feeding, where you try to squeeze the same amount of eating into a narrow evening window, has benefits compared to eating in the evening and earlier in the day, but also has adverse effects, because you’re eating so much so late.

The best of both worlds was demonstrated in 2018, time-restricted feeding into a narrow window earlier in the day. Individuals randomized to eat the same food, but just in an 8 a.m. to 3 p.m. eating window, experienced a drop in blood pressures, oxidative stress, and insulin resistance.  Even when all the study subjects were maintained at the same weight. Same food, same weight, but with different results. The drops in blood pressures were extraordinary: from 123/82 down to 112/72 in five weeks comparable to the effectiveness of potent blood-pressure drugs.

How did it work? Even though they weren’t told to change nutrition quality or quantity, they appeared to unintentionally eat hundreds of fewer calories a day. With self-selected time frames, you wouldn’t necessarily think to expect circadian benefits, but because subjects were asked to keep the eating window consistent throughout the week, “metabolic jetlag could be minimized.” The thinking is that because people tend to start their days later on weekends, that’s disrupting their circadian rhythm. And, indeed, it is like they flew a few time zones west on Friday evening and flew back east on Monday morning. So, some of the metabolic advantage may have been due to maintaining a more regular eating schedule.

Early or midday time-restricted feeding may have other benefits as well. Prolonged nightly fasting with reduced evening food intake has been associated with lower levels of inflammation and better blood sugar control, both of which might be expected to lower the risk of diseases such as breast cancer. So, data was collected on thousands of breast cancer survivors to see if nightly fasting duration made a difference. Those who couldn’t go more than 13 hours every night without eating had a 36 percent higher risk of cancer recurrence. These findings have led to the suggestion that efforts to “avoid eating after 8 pm and fast for 13 hours or more overnight may be a beneficial consideration for those patients looking to decrease cancer risk and recurrence,” though we’d need a randomized controlled trial to know for sure.

Early time-restricted feeding may even play a role in the health of perhaps the longest living population in the world, the Seventh-Day Adventist Blue Zone in California. Slim, vegetarian, nut-eating, exercising, non-smoking Adventists live about a decade longer than the general population. Their greater life expectancy has been ascribed to these healthy lifestyle behaviors, but there’s one lesser known component that also may be playing a role. Historically, eating two large meals a day, breakfast and lunch, with a prolonged overnight fast was a part of Adventist teachings. Today, only about 1 in 10 Adventists surveyed were eating just two meals a day, but most—over 60 percent—reported breakfast or lunch was their largest meal of the day. Though this has yet to be studied with respect to longevity, front-loading one’s calories earlier in the day with a prolonged nightly fast has been associated with significant weight loss over time, leading the researchers to conclude that eating breakfast and lunch five to six hours apart, and making the overnight fast last 18 to 19 hours may be a useful practical strategy for weight control. The weight may be worth the wait.