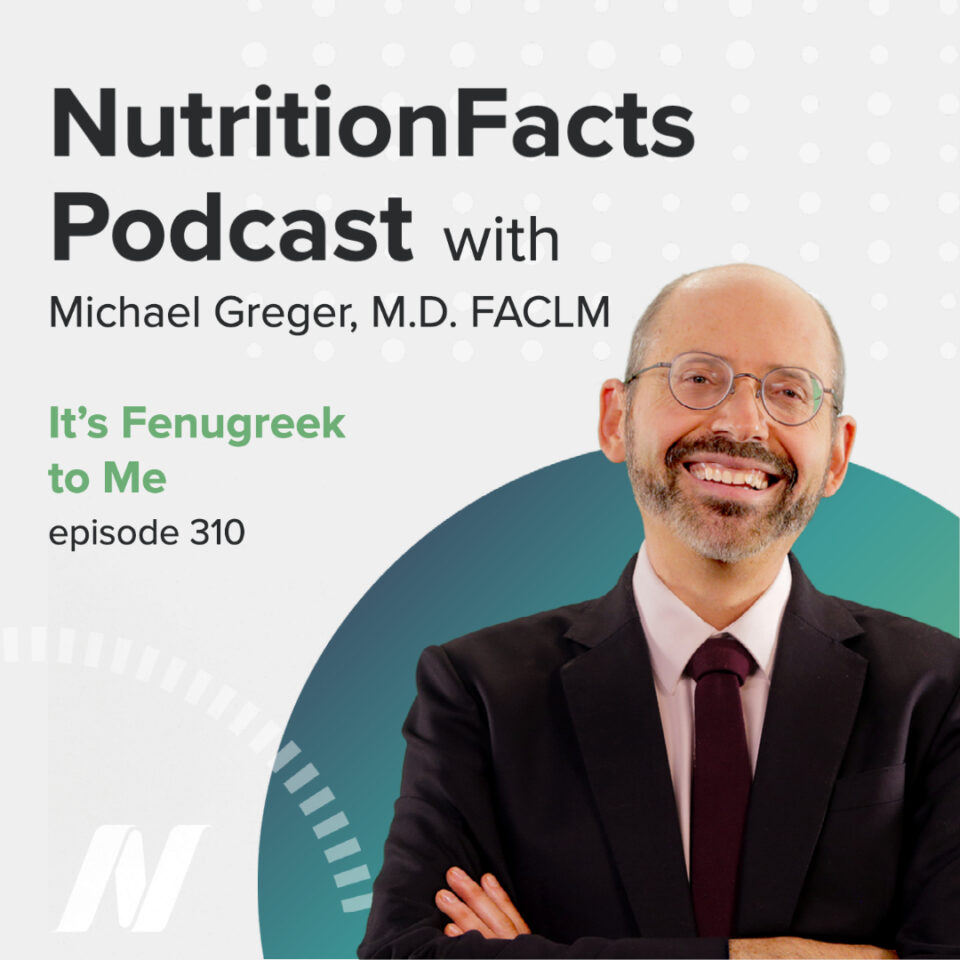 It’s an herb. It’s a seed. It’s a naturally occurring edible spice, and it may also be an anti-cancer agent. This episode features audio from Benefits of Fenugreek Seeds, Side Effect of Fenugreek Consumption, and Fenugreek Benefits for Sexual Function, Painful Periods, and Milk Production. Visit the video pages for all sources and doctor’s notes related to this podcast.

Today, we learn about an herb with impressive health benefits that has long been used in alternative medicine. It’s called Fenugreek – and its effects are remarkable.

“The effects of a commercially available botanical supplement on strength, body composition, power output, and hormonal profiles in resistance-trained males.” Something “had a significant impact on both upper- and lower-body strength and body composition in comparison to placebo in a double-blind controlled trial. These changes were obtained with no clinical side effects.” Allowed these men to leg press an extra hundred pounds, compared to placebo.
And, the magical substance was fenugreek, “a naturally occurring edible spice” that appears to double “as an anticancer agent.”
“In summary, fenugreek seeds [may] possess potent anti-cancer properties.”

In our next story, we learn that for all the benefits of fenugreek seeds, they do have – an interesting side effect.

Cancer prevention is all well and good, but there is a side effect of fenugreek seed consumption—it makes your armpits smell like maple syrup. “Analysis of human male armpit sweat after fenugreek ingestion.” And yes, it happens to women, too.
“The strong ‘maple-syrup’ odor which appears after fenugreek ingestion was investigated.” They had men plaster some gauze pads under their armpits before and after eating a tablespoon of fenugreek seeds. Sweat was collected over a 24-hour period and given to a panel of eight odor assessors to get their take. The experts described what they smelled in those armpits as cocoa, roast beef, carrots, spicy, gravy, but then, honey, rose, and lilac, peach-like, raspberry. I guess it could have been worse.
There was one assessor who described one of the fenugreek odor compounds as “[m]usty, sweet, onion, socks.” Another agreed but thought it more like “[f]ruity, floral, socks.” Of course, there was the boring assessor who was like, uh, smells like fenugreek.
This is a harmless phenomenon; the only reason I bring it up is that there is actually a serious congenital disorder called maple syrup urine disease: branched-chain ketoaciduria. It’s completely unrelated, but breastfeeding infants with moms using fenugreek to boost their milk production may be misdiagnosed.
So, if you’re breastfeeding and eating fenugreek, make sure to tell your OB, just so they don’t worry.

Finally today, we look at the hormonal benefits of fenugreek.

In my video the Benefits of Fenugreek Seeds, I profiled this study, in which young men were randomized to a sugar pill or fenugreek capsules for eight weeks, and got a significant improvement in upper body strength, lower body strength, body composition, and a significant reduction in body fat percentage. And the only side effect? It can make your sweat and pee smell like maple syrup. Seems like a bonus!
Studies on immature castrated rats suggest the fenugreek muscle bulking is a testosterone effect, but we didn’t know what happens in humans until now. Four randomized controlled trials put it to the test and…saw a significant boost of total blood testosterone. And indeed, fenugreek appears to improve sexual function in men––for example, doubling the frequency of morning erections. What about the sexual function in women?
While the estrogen hormone estradiol stimulates vaginal lubrication and blood flow, facilitating a woman’s capacity for sexual arousal and orgasm, it’s the testosterone that’s linked with sexual desire in both men and women. Drug companies have tried testosterone patches on women to try to increase sexual desire, but we’re concerned about blood clots and long-term safety. What about a little fenugreek? A significant increase in testosterone compared to placebo, and a boost in the estrogen estradiol, which resulted in both an increase in sexual desire and function, translating into about a doubling of sexual activity compared to placebo.
If fenugreek causes an increase in estrogen levels, what about the efficacy of fenugreek for reducing menopausal symptoms? A significant reduction in menopausal symptoms across every single domain––for example, cutting the weekly numbers of hot flashes and night sweats in half over a period of three months.
Other hormonal effects include an improvement in painful periods. What I like about this study is they didn’t use some proprietary extract, but just straight, plain fenugreek powder that you’d buy at the store. Now, they packed it into capsules just so they could pit it against a sugar pill placebo, but the dose they used is just about a third of a teaspoon three times a day, taken the first three days of their period. A third of a teaspoon would only cost about 5 cents. And boom! A significant decrease in pain, and also it appeared to improve other symptoms as well.
While we’re on a roll with hormonal effects, what about the effectiveness of fenugreek as a galactagogue? No, not another sci-fi reboot. A galactagogue is something that increases breast milk production in lactating mothers, and fenugreek fits the bill. And not just by a little. In this randomized double-blind, placebo-controlled trial in which breastfeeding women who took less than a quarter teaspoon of fenugreek, less than a quarter teaspoon of ground ginger, and about a 16th of a teaspoon of turmeric every day doubled their milk production within a month. They had about a 50 percent increase by week two, and a 100 percent increase by week four.
However, due to its potential stimulation on the uterus, fenugreek seeds should not be used during pregnancy. Though this is all based on laboratory animal data, better safe than sorry.

How Effective Is Chemotherapy?