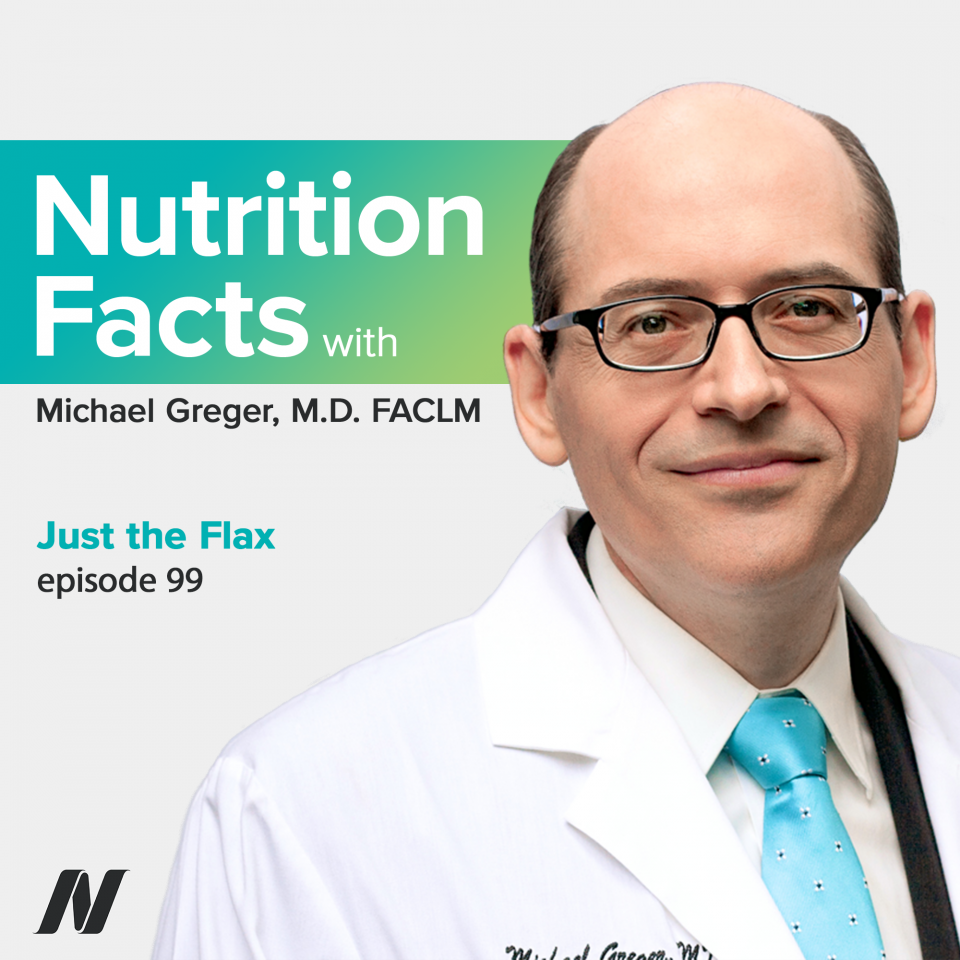 Listen to what this little seed can do.

This episode features audio from Just the Flax, Ma’am, Was It the Flax Seeds, Fat Restriction, or Both?, and Flax Seeds for Sensitive Skin. Visit the video pages for all sources and doctor’s notes related to this podcast.

On today’s show – we examine the power of flax.  And no – I didn’t say facts – although I do put a great deal of effort into making sure my work is powered by facts as well.  Today, I’m talking facts on flax–little seeds that aren’t just nutritional powerhouses, but may have medicinal benefits.

Flax seed is one of the original health foods, treasured for its healing properties throughout the Roman Empire, and one of the original medicines used by Hippocrates.  Mahatma Gandhi himself was right when he said, “Wherever flax seeds become a regular food item among the people, there will be better health.” Dr. Andrew Weil, one of the more reputable alternative medicine physicians, says that if we can make only a single dietary change, it should be to add flax seeds to our diet. Okay, but where do we find them, and how should we eat them?

Flax seeds are almost always in the bulk section of any natural food store and for about a dollar a pound, you’ve got like a two-month supply. There are brown ones and golden ones. They’re the same nutritionally, so pick your favorite color, I guess. They come with nature’s own finest packaging: a hard natural hull that keeps them fresh for up to a year, in an airtight container. Unfortunately, nature’s packaging is actually a little too good; if we eat flax seeds whole, they are likely to pass right through us, come out the other end, and not do us much good. So chew them really well, or grind them up in a coffee or spice grinder, a mini food processor, or a good blender. After they’re ground, store them in the refrigerator, and they’ll last a few months.

An easy way to get our daily intake is with a morning smoothie. Just put two tablespoons of flax seeds in a blender, grind them into powder, throw in some frozen berries, maybe half a frozen banana, some soy milk or almond milk (any of the so-called “motherless milks”). Flax seeds have this binding quality that makes for these thick, rich kind of milkshake-y type smoothies.

In fact, you can use ground flax seed to replace eggs in baking. Just blend one tablespoon of ground flax with three tablespoons water, until it gets all kind of gooey, for each egg in the recipe.

Ground flax is better than the flax seed oil. The seeds are little nutrition powerhouses, and we lose much of the nutrition when we just press out the oil. Not only are flax seeds the richest source of lignans, they are a great source of iron, zinc, copper, calcium, protein, potassium, magnesium, folate, soluble fiber—which can lower our cholesterol and triglycerides—even boron, a trace mineral important for optimum bone health. We don’t get any of those, though, with just the flax seed oil. Another example of the importance of eating whole plant foods.

Flax seeds are incredibly powerful at dampening the effects of estrogen. Eating just a single tablespoon of ground flax seeds a day extends the length of a woman’s menstrual cycle—not the menses itself, but the whole month-long cycle—by an average of about one day. So you have fewer periods throughout your life, which means less estrogen exposure, and lower breast cancer risk.

It’s good for men, too. Flax seeds were recently compared to a leading pharmacological treatment for enlarged prostates. The standard drug costs about $300 a year versus only about $10, perhaps, for daily flax. This new study found they both work just as well as each other. But what about the side effects? Well, the drug can cause headaches, dizziness, diarrhea, and all sorts of abnormalities. Flax has some side effects too, though: it improves our cholesterol and blood sugar, controls our blood pressure, and helps control hot flashes—though that’s not usually a big problem in sufferers of enlarged prostates.

In our next story, researchers set out to find out what it was about a flax seed-supplemented, lower-fat diet that so effectively appeared to decrease prostate cancer growth.

Preliminary, but impressive results. A flax seed-supplemented, lower-fat diet appeared to decrease cellular proliferation rates in men with precancerous changes in their prostates. “However, given the composite nature of the intervention [both a lower-fat diet and flax seeds], it is unknown whether the effects can be attributed to the flaxseed supplementation, a fat-restricted diet, or both factors [working together].”

To figure that out, you’d have to design some study where you split men into four groups: a control group; a flaxseed-only group; a lower-fat-only group; and then, a flaxseed-and-lower-fat group. And, so, that’s exactly what they did.

A hundred and sixty-one prostate cancer patients, at least 21 days before their prostate removal surgery, were randomly assigned to one of those four arms. And, as the title describes, it was apparently the flax seeds, but not dietary fat restriction alone, that reduced prostate cancer proliferation rates in men pre-surgery.

Here are the numbers. Whether they were eating their usual or lower-fat diet, it was the men eating the flax that saw their tumor proliferation rates significantly drop. Though, if you look at what they actually ate, the “low-fat” diet groups never really got down to the target 20% calories from fat. They did drop their fat intake, but you could hardly call 25-28% calories from fat a low-fat diet.  Still, the lower-fat groups were the only ones who saw a significant drop in cholesterol and body weight, so there are certainly benefits.

Bottom-line, further studies are needed before we can definitively support flax seed supplementation as a proven complementary therapy for prostate cancer. To date, however, the evidence suggests that flax seed is a good, low-cost source of nutrition, and it’s well-accepted and safe to use. So, why not give it a try?

Instead of treating sensitive skin topically, with lotions and creams, why not treat it from the inside out, with diet, specifically, flax seeds?

Okay, so, what can we do about it? Well, recently, supplementation of flax seed oil was found to diminish skin sensitivity and improve skin barrier function and condition.  In a randomized, double-blind, 12-week study, women were given about a half teaspoon of flax seed oil a day—internally—versus safflower oil, as a control. That’s the amount of oil found in about a teaspoon and a half of flax seeds.

After three months, there was a significant decrease in skin reddening in the flax group compared to the safflower group, when an irritant chemical was painted on their forearms to measure skin sensitivity. Their skin also ended up significantly better hydrated, had significantly better barrier function—as evidenced by lower transepidermal water loss—skin that’s less rough; less scaly; and smoother. You can actually see the changes in a close-up view of the skin. Skin looked pretty much just as dry and scaly before and after the safflower oil intervention, but significantly improved after the flax seed oil.

Sensitive skin is typically treated by topical application of lotion and creams. But, why not treat it from the inside? “This study showed that daily supplementation with flax seed oil improved skin appearance and led to a decreased skin sensitivity by improving epidermal barrier function and decreasing inflammation…”

The best source of flax seed oil is within the flax seed itself, right?  Then, you get all the nutrition of the whole food, and it’s cheaper and more stable. Unlike the oil, you can bake with the seeds without destroying the omega-3s, and can even store ground flax seed for a month, at room temperature, without spoilage or oxidation.

My Slim and Healthy Greek Diet