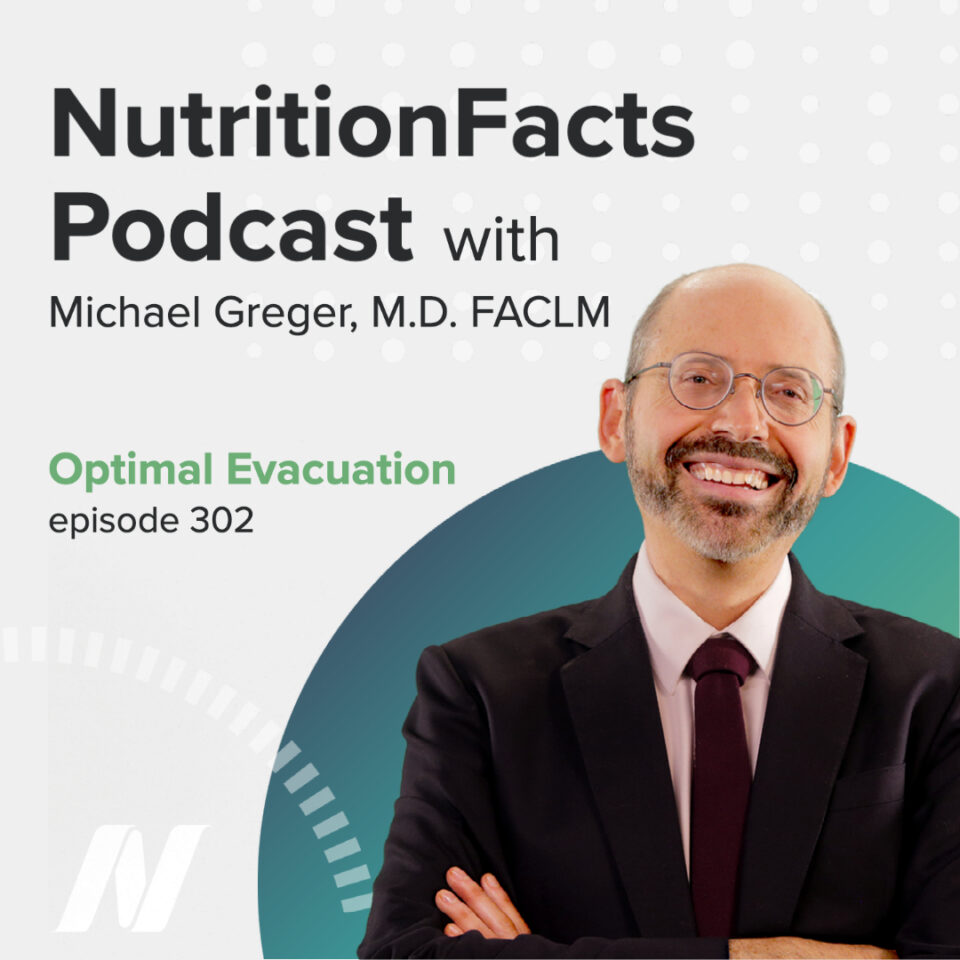 It’s a great feeling to evacuate our bowels successfully. Here are some ways to keep that smile on your face.

This episode features audio from The Best Poop Position for Constipation, How Many Bowel Movements Should You Have Every Day?, and Prunes: A Natural Remedy for Constipation. Visit the video pages for all sources and doctor’s notes related to this podcast.

Today, we examine the best way to have the most regular and otherwise agreeable – bowel movements. And we’re going to start with the best pooping position.

While squatting continues to be the traditional position in populations of Asia and Africa, Westerners have become accustomed to sitting on toilet seats. And when we do that, when we sit upright, our poop is forced to make a nearly 90-degree turn, the so-called recto-anal angle. Now, that’s a good thing in terms of keeping us from pooping our pants every time we sit down. But when it comes to doing our business, the sitting toilet posture defeats the purpose of our body’s brilliant design—like trying to drive a car without releasing the parking brake. Yet, many physicians are hesitant to discuss such an unmentionable bodily function or may just be ignorant. Doctors don’t know squat.
Of course, this is coming from someone who owns a company selling people squatting platforms for their toilets. In a previous video, I talked about those little footstools you can use to raise your knees when you assume a pooping position, but they were not found to make a difference in terms of self-described difﬁculty in defecating or the average time spent emptying one’s bowels. But those stools give only a measly 4-inch boost. The so-called Squatty Potty is twice that height, and while you have to admire their graphics, from booty blockage to fecal fiesta, complete with little rainbow poops, it had never been put to the test, until now.
The implementation of a Defecation Posture Modification Device, i.e., Squatty Potty, and…it worked! Increased feelings of bowel emptiness, reduced straining, and about a minute off of their on-the-pot reading time. The only downside is the discomfort, even just a 6-inch riser was found to cause such extreme discomfort in research subjects in a previous trial they abandoned even trying to study it.
How else can we get that same change in angle you get from raising your feet? How about just tipping forward? It’s like that famous sculpture by Rodin, The Thinker. And indeed, Cleveland Clinic researchers set out to study “The Thinker” position for defecation, and were able to show an opening of the ano-rectal angle, as measured using cinedefecography, your SAT word for the day—meaning basically x-ray poop movie—opening to more than 130 degrees, better than what you can get just raising your feet, which is only around 90 degrees. So, ‘‘The Thinker’’ position may be a more efﬁcient method for defecation, it may help with constipation, but it has not yet been formally put to the test.
As an aside, you can imagine how the worst position might be flat on your back using a bedpan, because of the spike in blood pressure in your heart and brain when you bear down, straining at stool is associated with sudden death from heart attack and stroke. In fact, it has been found to be the most common activity of daily living being performed at the time of death in Japan, and those who can’t get out of bed would seem to be especially at risk. That’s why, if at all possible, it can help to sit people up in bed to cause less strain on the system.
It’s important to take a step back, though, in this sitting vs. squatting debate, as this commentary did, nearly 50 years ago. Yes, the squatting position is said to be natural, since it is used by so-called primitive peoples who pass large stools easily, such that squatting advocates blame the porcelain throne for all manner of Western maladies, but does the position really make a difference if you’re eating the right foods? The man who squats because he has no modern plumbing also tends to eat more natural foods that haven’t had the fiber processed out. Adding fiber to the diet can enable constipated patients to poop effortlessly without having to squat over some hole in the ground. So, maybe if we just change the design of our diets, we don’t have to change the design of our plumbing.

In our next story, we look at how most people have between 3 bowel movements a day and 3 a week! But normal doesn’t necessarily mean optimal.

Ancient Egypt was one of the great civilizations, lasting for 3,000 years, its knowledge of medicine vastly underestimated. They had medical subspecialties. The pharaohs, for example, had access to physicians dedicated to be guardians of the royal bowel movement, a title alternately translated from the hieroglyphics to mean Shepherd of the Anus. How’s that for a resumé builder?
Today, the primacy of its importance continues, with some calling for bowel habits to be considered a vital sign of how the body is functioning, along with blood pressure, and heart and breathing rates. Although we may not particularly like hearing the details of someone else’s bowel movement, it is a function that nurses and doctors need to assess.
Surprisingly, the colon remained relatively unexplored territory, one of the body’s final frontiers. For example, current concepts of what “normal” stools are like primarily emanate from the detailed records of 12 consecutive bowel movements in 27 healthy subjects from the United Kingdom, who boldly went where no one had gone before. Those must have been really detailed records.
The reason we need to define normal, when it comes to bowel movement frequency, for example, is how else can we define concepts like constipation or diarrhea if we don’t know what normal is. Standard physiology textbooks may not be helpful in this regard, implying that anything from one bowel movement every few weeks or months to 24 a day can be regarded as normal. Once every few months?
Of all human bodily functions, defecation is perhaps the least understood and least studied. Can’t you just ask people? Turns out people tend to exaggerate. There’s a discrepancy between what people report and what researchers find when they actually have them recorded. It wasn’t until 2010 when we got the first serious look, defining normal stool frequency as between three per week and three per day, based on the fact that that’s where 98% of people tended to fall. But normal doesn’t necessarily mean optimal.
Having a “normal” salt intake can lead to a “normal” blood pressure, which can help us die from all the “normal” causes, like heart attacks and strokes. Having a “normal” cholesterol level in a society where it’s “normal” to drop dead of heart disease—our #1 killer, is not necessarily a good thing. And indeed, significant proportions of people with “normal” bowel function reported urgency, straining, and incomplete defecation, leading the researchers to conclude that that kind of thing must just be normal. Normal, maybe, if you’re eating a fiber-deficient diet. But not normal for our species. Defecation should not be a painful exercise. This is readily demonstrable. For example, the majority of rural Africans eating their traditional fiber-rich, plant-based diets can usually pass, without straining, a stool specimen on demand. See, the rectum may need to accumulate four or five ounces of fecal matter before the defecation reflex is fully initiated, and so if you don’t even build up that much over the day, you’d have to strain to prime the rectal pump.
Hippocrates thought bowel movements should ideally be two or three times a day, which is what you see in populations on traditional plant-based diets, on the kind of fiber intakes you see in our fellow great apes, and what may be more representative of the type of diets we evolved eating for millions of years. It seems somewhat optimistic, though, to expect the average American to adopt a rural African diet. We can, however, eat more plant-based and bulk up enough to take the Hippocratic oath to go two to three times a day.
No need to obsess about it. In fact, there’s actually a “bowel obsession syndrome,” characterized in part by ideational rambling over bowel habits, but three times a day makes sense. We have what’s called a gastrocolic reflex, which consists of a prompt activation of muscular waves in our colon within 1 to 3 minutes of the ingestion of the first mouthfuls of food. Even just talking about food can cause your brain to increase colon activity. This suggests the body figured that one meal should be just about enough to fill you up down there. So, maybe we should eat enough unprocessed plant foods to get up to three a day, a movement for every meal.

In our final story today – prunes, figs, and exercise are put to the test as natural home remedies for constipation.