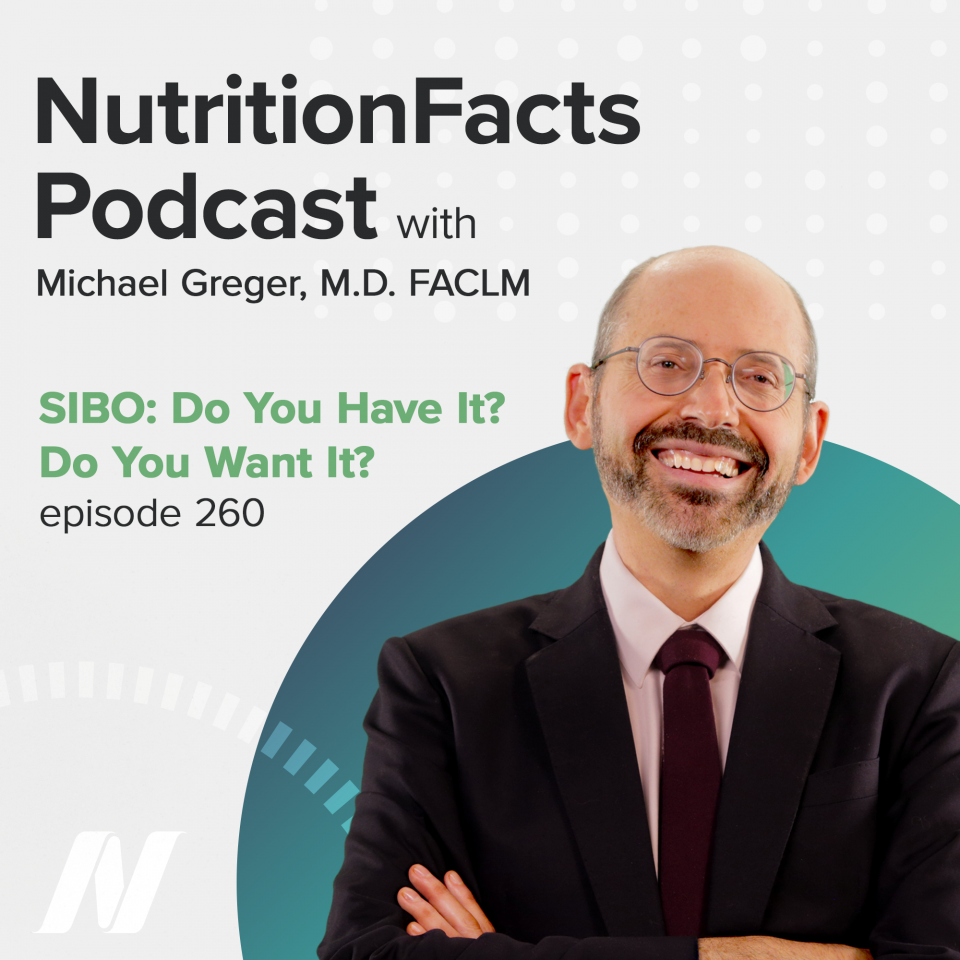 This episode features audio from Are Small Intestinal Bacterial Overgrowth (SIBO) Tests Valid? and Fiber vs. Low FODMAP for SIBO Symptoms. Visit the video pages for all sources and doctor’s notes related to this podcast.

Gastrointestinal symptoms, like abdominal pain and bloating, account for millions of doctor visits every year. One of the conditions that may be considered for such a nonspecific presentation of symptoms is SIBO, small intestinal bacterial overgrowth, a concept that “has gained popularity on the internet in addition to certain clinical and research circles.” “SIBO is broadly defined as [the] excessive [growth of] bacteria in the small intestine,” and it’s typically treated with antibiotics. But “dispensing antibiotics to patients with [such] nonspeciﬁc, common symptoms…is not without risks”—you could be fostering antibiotic resistance, there could be side effects, and wiping out your good bacteria could set you up for an invasion of bad bugs like C. diff, all for a condition that may not even be real.

Even alternative medicine journals admit that SIBO is being over-diagnosed, creating confusion and fear. SIBO testing is overused and overly relied upon. Diagnoses are often handed out quickly and without adequate substantiation. Patients can be indoctrinated into thinking SIBO is a chronic condition that cannot be cleared, and will require lifelong management. This is simply not true for most, and is an example of the damage done by overzealousness. “The ‘monster‘ that we now perceive SIBO to be may be no more than a phantom.”

The traditional method for a diagnosis was a small bowel aspiration, an invasive test where a long tube is snaked down your throat to take a sample and count the bugs down there. But this method has been almost entirely replaced with breath testing. See, normally, a sugar called glucose is almost entirely absorbed in the small intestine; so, it never makes it down to the colon. So, if there is bacterial fermentation of that sugar, that suggests you have bacteria up in your small intestine and can detect that fermentation, because the bacteria produce specific gases that get absorbed in your blood stream and then are breathed out from your lungs, which can then be detected with a breathalyzer-type machine.

Previously, a sugar called lactulose was used, but “lactulose breath tests [weren’t found to] reliably detect the overgrowth of bacteria;” so, researchers switched to glucose. But when glucose was finally put to the test, it didn’t work either. The bacterial load in the small intestine was similar for those testing positive or negative; so, that’s not a useful test either. It turns out glucose can make it down to your colon after all. They labeled the glucose dose with a tracer and found that almost half of the positive results from glucose breath tests were false positives, because they were just fermenting it down in their colon where your bacteria are supposed to be. So, “patients…incorrectly labeled with SIBO may [undergo] multiple courses of antibiotics…” for a problem they don’t even have.

Why do experts keep recommending breath testing then? Oh, you mean the experts at the conference supported by a breath-testing company, most of whom had personally received funds from SIBO testing or antibiotic companies? And even if we could properly diagnose it, does it even matter? In those with digestive symptoms, there is a range of positivity for SIBO from approximately 4 percent to 84 percent—all over the map—and “there [may] be no difference in…symptom scores between those testing positive [versus] those testing negative,” so testing positive could mean anything. Who cares if some people have bacteria growing in their small intestines, if that doesn’t necessarily correlate with symptoms?

Now, antibiotics can make people with irritable bowel-type symptoms diagnosed with SIBO feel better; so, doesn’t that prove SIBO was the cause? No, because it can make just as many people feel better who are negative for SIBO. Currently, rifaximin is most often used for SIBO, but it’s “not…FDA-approved for SIBO…[so the] cost can be prohibitive.” In fact, no drug has been approved for SIBO; so, even if you have good insurance, you may be shelling out-of-pocket as much as $50 a day, and you typically take it for two weeks.

And while antibiotics may help in the short-term, they may make things worse in the long-term. Those “who are given a course of antibiotics are more than three times as likely to report more bowel symptoms four months later than controls.”

Finally today, it may not be the number of bacteria growing in your small intestine, but the type of bacteria, which can be corrected with diet.

If you test more than a thousand patients suffering from irritable bowel-type symptoms, such as excess gas, bloating, diarrhea, and abdominal pain for longer than six months who don’t appear to have anything more serious going on, such as inflammatory bowel disease, a significant percentage were found to be suffering from lactose intolerance—intolerance to the milk sugar lactose. In infancy, we have an enzyme in our small intestine that digests milk sugar, but most of us understandably lose it after weaning. “Although a genetic mutation has led to the persistence of [the enzyme] in [a minority of] adults, about 75 percent of the world’s population mal-absorb lactose [and have lactose intolerance] after age 30.” A third, though, were diagnosed with SIBO, small intestinal bacterial overgrowth.

The evidence for SIBO and IBS symptoms is shrouded in controversy, predominantly because of the fact that the breath tests used in clinical practice to diagnose SIBO are not valid, as I explored in the last video. And it’s not even clear what the implications are of having more versus less bacteria growing in your small intestine, since the number don’t seem to correlate with symptoms. It turns out it’s not the number but the type. It’s the kind of bugs you have growing in your small intestine. So, it’s “small intestinal microbial dysbiosis”––not overgrowth in general, but the wrong kind of growth, that appears to underlie symptoms associated with functional gastrointestinal disorders like irritable bowel syndrome.

How can you prevent this from happening? Well, the symptoms appeared be correlated to a significant drop in the number of Prevotella species. Remember them? Prevotella are healthy fiber feeders, suggestive of a higher ﬁber intake in healthy individuals, while the bugs found more in symptomatic patients ate sugar, which may reﬂect a higher dietary intake of sugars. Yes, but correlation doesn’t mean causation. To prove cause-and-effect, you have to put it to the test, which is exactly what they did.

“Switching a group of healthy individuals who habitually ate a higher­ fiber diet…to a [more typical standard American] low-­fiber diet [with lots of sugar]…produced striking results” within just seven days. “First, 80 percent developed [new] gastrointestinal symptoms [out of the blue], such as bloating and abdominal pain that resolved on resumption of their [more healthful,] habitual high[er]-fiber diet. [And the] diet­-related changes in the small intestinal microbiome were predictive of symptoms…and linked to an alteration in [intestinal] permeability;” in other words, they developed a leaky gut within seven days. And while some went from SIBO positive to SIBO negative, or SIBO negative to SIBO positive, it didn’t matter, since the number of bacteria growing didn’t correlate with symptoms. It was the type of bacteria growing.

And no wonder their guts got leaky. Short-chain fatty acid levels plummeted. Those are the magical by-products that our good gut bugs make from fiber, which “play an important role in [intestinal] barrier integrity,” meaning keeping our gut from getting leaky.

So, while we don’t have sound data that something like a low-FODMAP diet has any benefit for SIBO-symptom patients, there have been more than a dozen randomized controlled trials putting fiber to the test, and, overall, there was a signiﬁcant improvement in symptoms among those randomized to increase their ﬁber intake. That may actually help explain why high-fiber, plant-based diets may prevent so many common diseases—the effect such diets have on the composition and metabolic activity of our microbiome. Our good gut bugs take the plant residues like fiber and produce “health-promoting and cancer-suppressing metabolites,” like those short-chain fatty acids “which have profound anti-inflammatory” properties.

“All the evidence points to a physiological need for about 50 g [of] fiber per day, which is the amount contained in the traditional African diet and associated with the prevention of westernized diseases.” That’s approximately twice what’s typically recommended, and three times more than what most people are getting day to day. Perhaps it should be no surprise we need so much. Even though we split from chimpanzees millions of years ago, “there is still broad congruency” in the composition of our respective microbiomes to this day. While they’re still eating their 98-99 percent plant-based diets to feed their friendly flora with fiber, we’ve largely removed fiber-rich foods from our food supply.

For recipes, check out my even newer book, the “How Not to Diet Cookbook.” It’s beautifully designed, with more than 100 recipes for delicious and nutritious meals. All the proceeds I receive from the sales of my books go to charity.

A Doctor a Day Keeps the Apples Away