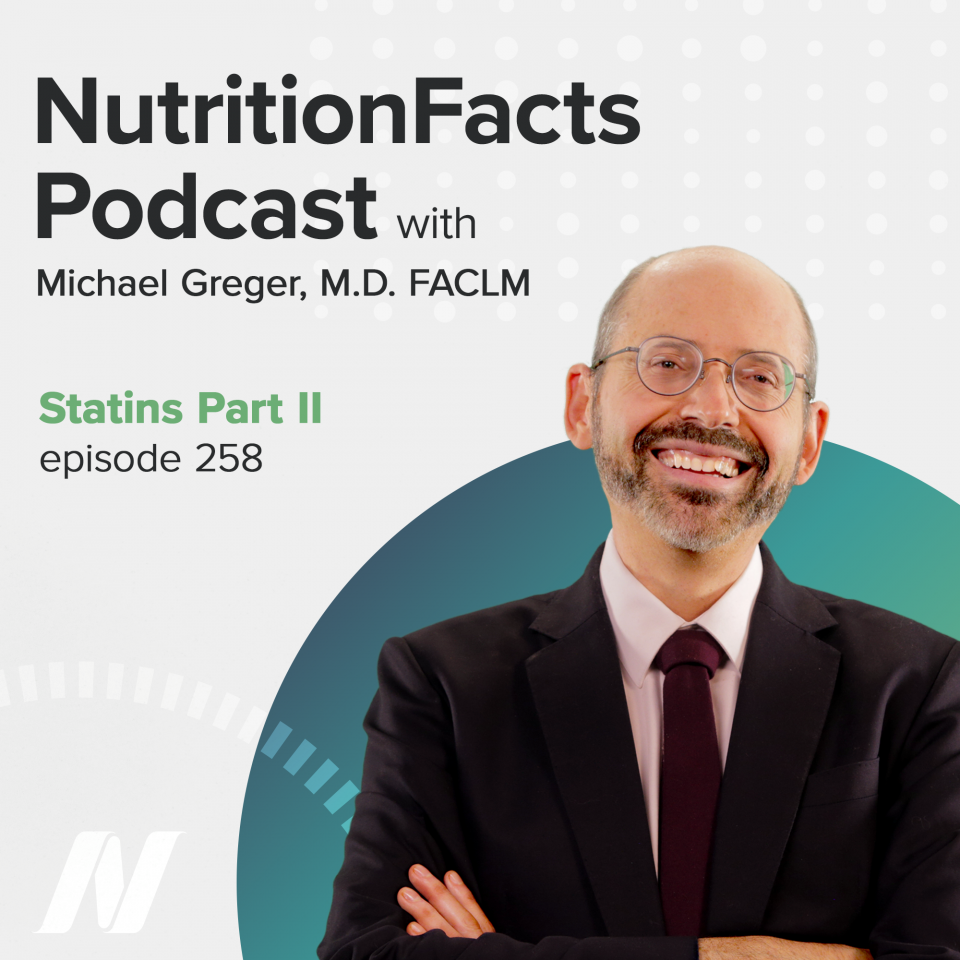 Today on the Nutrition Facts Podcast, we use a new visualization tool to help us decide if we need to take statins.

This episode features audio from The True Benefits vs. Side Effects of Statins and How Much Longer Do You Live on Statins?. Visit the video pages for all sources and doctor’s notes related to this podcast.

Today, it’s part two of our series on statins. And we start with a Mayo Clinic visualization tool that will help you decide if cholesterol-lowering statin drugs are right for you.

“Physicians have a duty to inform their patients about the risks and benefits of [whatever they prescribe]. However, physicians rarely communicate [the absolute risk numbers], such as numbers needed to treat”—in other words, how many people are actually helped by the drug; “numbers needed to harm”—in other words, how many people are actually hurt by the drug; “or prolongation of life”—how much longer will it enable to you to live—“despite patients wanting all this information.”

If doctors inform patients only about the relative risk reduction, for example, telling patients a pill will cut their risk of heart attacks by 34 percent, 9 out of 10 agree to take it. Give them the same information framed as absolute risk reduction, though, “1.4 percent fewer patients had heart attacks,” and those agreeing to take the drug drops to only 4 out of 10. And use the number needed to treat, and only 3 in 10 patients would agree to take it. So, if you’re a doctor, and you really want the patient to take the drug, which statistic are you going to use?

The use of relative risk stats to inflate the benefits and absolute risk stats to downplay any side effects has been referred to as “statistical deception.” But you can see how easily you could manipulate people if you picked and chose how you were presenting the risks and benefits. So ideally, you’d use both: the relative risk reduction and absolute risk reduction stats.

So, those are the benefits. Put all the studies together, and there was no association between use of statins and risk of cancer. In terms of muscle problems, estimates range from just 1 in 1,000 to closer to 1 in 50.

If all those numbers are just blurring together, the Mayo Clinic developed a great visualization tool. For those at average risk, considering a statin over the next 10 years, of 100 people doing nothing, 10 may have a heart attack. If all 100 took a statin every day for those 10 years though, eight would still have a heart attack, but two will have been spared; so, there’s like a 1 in 50 chance taking the drug would help you avert a heart attack over the next decade.

What are the downsides? The cost and inconvenience of taking a pill every day, which can cause some gastrointestinal side effects, muscle aching and stiffness in maybe 5 percent, reversible liver inflammation in 2 percent, and more serious damage in perhaps 1 in 20,000 patients. The chance a few years of statins will actually save your life if you have no known heart disease is about 1 in 250.

If you want a more personalized approach, the Mayo Clinic has an interactive tool that also lets you calculate your 10-year risk. You can get there directly by going to bit.ly/statindecision.

Finally today we look at the pros and cons of the relative versus absolute risk of cholesterol-lowering statin drugs.

In response to the charge that describing the benefits of statin drugs only in terms of relative risk reduction is a statistical deception created to give the appearance that statins are more effective than they really are, it was pointed out that the problem with describing things in terms of absolute risk reduction, or number needed to treat, is that they can depend on the duration of the study. For example, say there’s some disease that has a two percent chance of killing you every year, but there’s some drug that cuts your risk 50 percent. That sounds amazing, but then you realize that at the end of a year, your risk will only have fallen from two percent down to one percent; so, the absolute reduction of your risk is only one percent. If 100 people were treated with the drug, instead of two people dying, one person would die; so, you’d have to treat 100 people to save one life, and so there’s like a 99 percent chance that taking the drug all year will have no effect on you either way.

This is the very reason why using relative risk makes sense. Absolute risk changes depending on the time frame you’re talking about, but with relative risk, you know that whatever risk you have, you can cut that risk in half taking the drug. Now, statins only cut your risk 25 percent, but since cardiovascular disease is the number one killer of men and women, if you’re unwilling to change your diet, that’s a powerful argument in favor of these kinds of drugs. You can see the same kind of dependency on trial duration looking at the “postponement of death by statin use.” How much longer do you get to live if you take statins?

“The average postponement of [death has some]…advantages over [other statistics because it may offer] a better intuitive understanding among [the general public],” whereas a stat like number needed to treat has more of a win-or-lose lottery-like quality. So, when a statin drug prevents like one heart attack out of a hundred people treated over five years, it’s not like the other 99 completely lost out. Their cholesterol dropped too, and their heart disease progression also presumably slowed down––just not enough to catch a heart attack within that narrow time frame.

So, what’s the effect of statins on average survival? According to an early estimate, if you put all the randomized trials together, the average postponement of death was calculated at maybe three or four days. What? Who would take a drug every day for years just to live a few days longer? Okay, well first, let’s try to put that in context. Three or four days is actually comparable to the gains in life expectancy from other medical interventions.

For example, it’s nearly identical to what you’d get from “highly effective childhood vaccines.” Because vaccines have been so effective in wiping out infectious diseases, these days they only add an average of three extra days to a child’s life. But, of course, if your child is the rare life that gets saved, they gain an entire lifetime—that’s why we vaccinate. It just seems like such a small average benefit, because it gets distributed over the many millions of kids who get the vaccine. Is that the same with statins?

An updated estimate was published in 2019, which explained that the prior estimate of three or four days was plagued by “important weaknesses,” and the actual average postponement of death was actually ten whole days. Headline writers went giddy from these data, but they didn’t understand is that this was only for the duration of the trial. So, if your life expectancy is only five years, then yes, statins may only increase your lifespan by 10 days, but statins are meant to be taken a lot longer than that. What you want to know is how much longer you get to live if you stick with the drugs your whole life.

Want to know what’s better than drugs? “[S]omething important and fundamental has been lost in the controversy [about] this broad expansion of statin therapy… . It is imperative that [patients be informed by their physicians (and hey, what about] drug labels too)…that not only their [cholesterol] levels but also their cardiovascular risk can be reduced substantially by adoption of a plant-based dietary pattern, and without drugs.”

In fact, “dietary modifications for cardiovascular risk reduction, including plant-based diets, have been shown to improve…[cholesterol] status [as well as] obesity, hypertension, systemic inflammation, [and on and on].” “The importance of this [plant-based] approach is magnified when one considers that, in contrast to statins, the ‘side effects’. . .—weight loss, more energy, and improved quality of life—are beneficial.”

For recipes, check out my even newer book, the “How Not to Diet Cookbook.” It’s beautifully designed, with more than 100 recipes for delicious and nutritious meals. And all proceeds I receive from the sales of my books go to charity.

A Doctor a Day Keeps the Apples Away