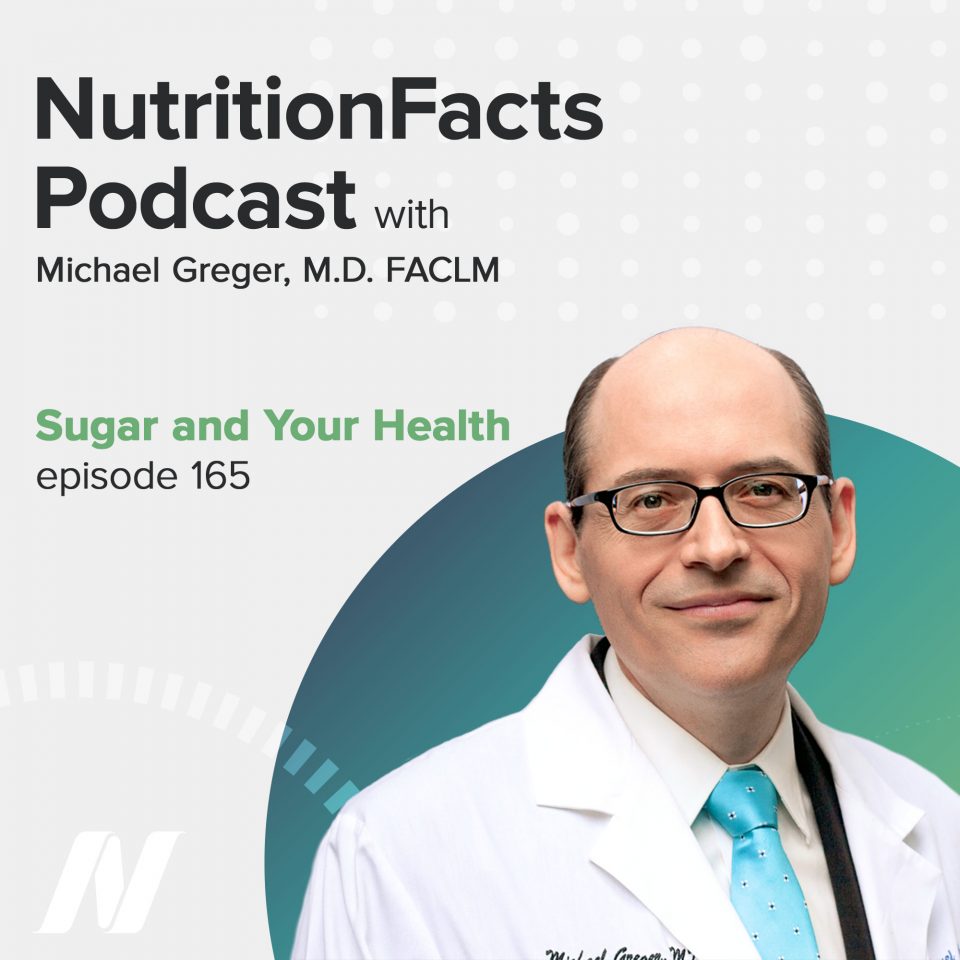 The effects of too much added sugar are anything but sweet.

This episode features audio from How Much Added Sugar Is Too Much?, Are Sugary Foods Addictive?, and Flesh & Fructose. Visit the video pages for all sources and doctor’s notes related to this podcast.

There’s lots to recommend for limiting the amount of sugar we eat. In our first story we find out if table sugar and high fructose corn syrup are just empty calories or can they be actively harmful?

In 1776, at the time of the American Revolution, Americans consumed about 4 lbs of sugar per person each year. By 1850, this had risen to 20 lbs, and by 1994, to 120 lbs, and now we’re closer to 160. Half of that is fructose, taking up about 10% of our diet. This is not from eating apples, but rather the fact that we’re each guzzling the equivalent of 16-oz soft drink every day on average; that’s about 50 gallons a year.

Even researchers paid by the likes of the Dr. Pepper Snapple Group and The Coca Cola Company, acknowledge that sugar is empty calories, containing no essential micronutrients, and therefore if we’re trying to reduce calorie intake, you know reducing sugar consumption is obviously the place to start.

Concern has been raised, though, that sugar calories may be worst than just empty. A growing body of scientific evidence suggests that the fructose added to foods and beverages in the form of table sugar and high fructose corn syrup in large enough amounts can trigger processes that lead to liver toxicity and other chronic diseases.

Fructose hones-in like a laser beam on the liver, and like alcohol, fructose can increase the fat in the liver, increasing the risk for nonalcoholic fatty liver disease, which is one of the most remarkable medical developments over the past 3 decades, the emergence of fatty liver inflammation as a public health problem here and around the globe.

As one author expressed, I suppose it is natural for the vast and powerful sugar interests to seek to protect themselves, since sugar takes up the single greater percentage of our daily caloric intake.

The American Heart Association is trying to change that though. Under their new sugar guidelines, most American women should consume no more than 100 calories per day from added sugars, and most American men should eat or drink no more than 150. That means one can of soda could take us over the top for the day. Similarly, the new draft guidelines from the World Health Organization suggests we could benefit from restricting added sugars to under 5% of calories. That’s about 6 spoonfuls of added sugar a day. I don’t know why they don’t just recommend zero as optimal, but you can get a sense of how radical their proposal is given that this is how many we consume right now.

In our next story we look at evidence from PET scans that suggests brain activity changes from the overconsumption of sugar may parallel that of drug addiction.

People have chewed coca leaves for at least 8,000 years as a mild stimulant without any evidence of addiction. But, when certain components are isolated and concentrated into cocaine, we’ve got a problem. The same may be true of sugar. People don’t tend to binge on bananas. It’s perhaps the reason we’re more likely to supersize soda than sweet potatoes.

“The overconsumption of sugar-sweetened diets has often been compared to drug addiction, though this parallel was based until very recently more on anecdotal evidence than on solid scientific grounds.” But now, we have PET scans, imaging technology that can measure brain activity. It all started with this publication, showing decreased dopamine sensitivity in obese individuals. And, the heavier they were, the less responsive they appeared to become. We see the same thing in cocaine addicts and alcoholics. “This would suggest that a reduction in dopamine receptors is associated with addictive behaviour, irrespective of whether it is due to food or to addictive drugs as seen in substance abusers.”

Dopamine is considered the neurotransmitter primarily involved in the pleasure and reward center of our brain, helping to motivate our drive for things like food, water, and sex. All necessary for the perpetuation of our species. It was healthy and adaptive for our primate brains to drive us to eat that banana when there wasn’t much food around. But now that fruit is in Loop form, “this adaptation has become a dangerous liability.” The original Coca-Cola formulation actually included coca leaf, but now, perhaps, its sugar content may be the addictive stand-in.

In modern times, we want to keep our uric acid levels as low as possible. How are we going to do that?

Well, there are two main things that raise your uric acid levels: purines and fructose, which means mostly meat and sugar. Everything from bacon and brains, to fish, poultry, shrimp, and veal, and then, both sugar and high fructose corn syrup are both about half fructose which leads to uric acid production in the body.

We went from eating about four pounds of added sugars a year to now about 100 pounds per person. That’s like third-pound of sugar a day. This could be playing a role in the dramatic rise in chronic disease over the last century, as argued in this award-winning recent paper, “The Evolution of Obesity: Insights from the mid-Miocine.”

One on One Interview with Ferdinand Beck

0 responses to “Sugar and Your Health”