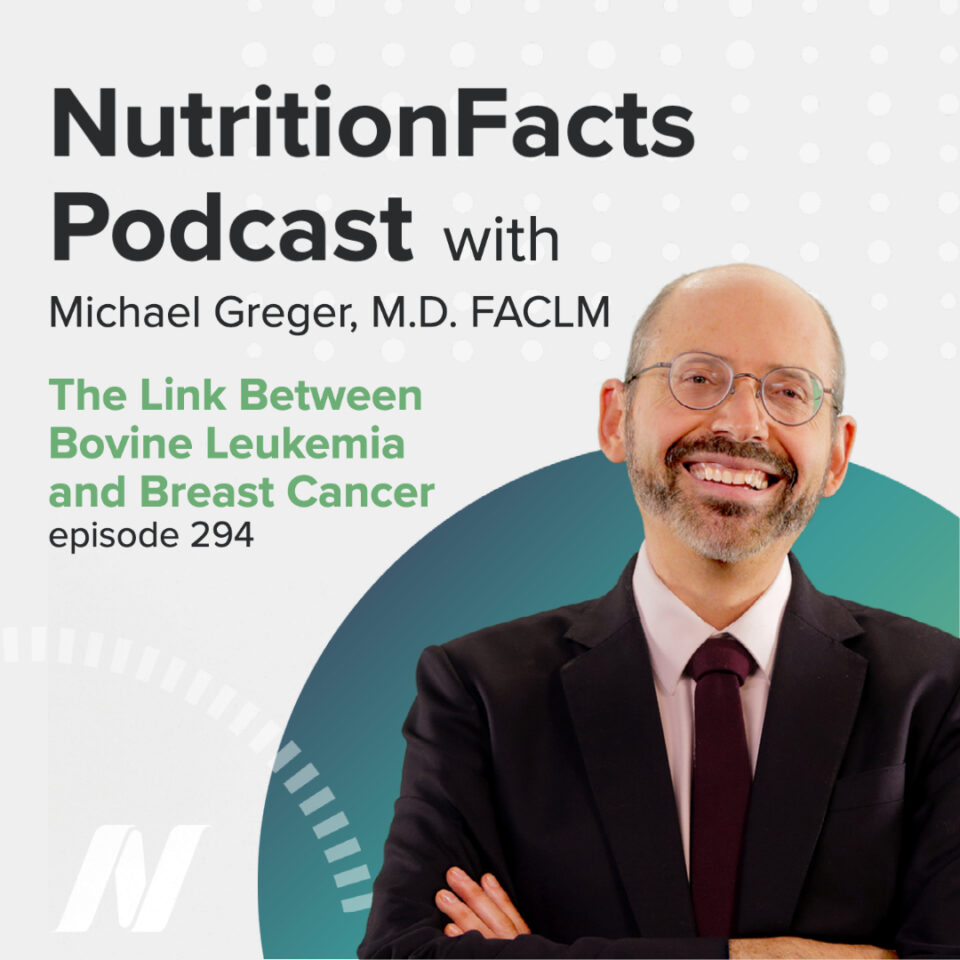 Welcome to the NutritionFacts podcast – with the latest peer-reviewed research on the best ways to eat healthy – and live longer.

Did you know that as many as 37 percent of breast cancer cases may be attributable to exposure to bovine leukemia virus?  Here’s our first story.

The incidence of breast cancer is continuously increasing worldwide. In the U.S., this amounted to a 40 percent increase in the incidence by the turn of this century. Currently, the main approach is early detection and treatment. That’s important, but why not pay more attention to primary prevention; in other words, protecting people from being exposed to risk factors for breast cancer so that they never develop breast cancer in the ﬁrst place?

“Overall, it is estimated that 20 percent of all human cancers have an infectious origin.” Viruses can trigger cancer by turning on cancer genes or turning off cancer suppressing genes, but they can also contribute to tumor formation just by causing chronic inflammation. Currently, cancer-causing viruses are considered the major plausible hypothesis for a direct cause of human breast cancer. How did we get here?

It all started about 40 years ago when a professor of virology at UC Berkeley learned how mouse mammary tumor virus was discovered. Scientists swapped baby mouse pups from mice with a high incidence of mammary cancer with pups from mouse strains with a low incidence, and found that the cancer incidence matched the foster mothers, showing it wasn’t genetic. “It occurred to me,” the professor thought, “that humans are foster-nursed on the cow.”

Bovine leukemia virus (BLV) had just been identified as a cancer-causing cow virus. At the time only about 1 in 10 U.S. dairy cows were infected, but now it’s closer to half. We started out with 2/3s of herds affected. Then, it was more like 80 percent, based on their milk testing positive for the virus, and 100 percent of the herds in the larger industrial farms. And now, more than 9 out of 10 U.S. herds are affected, a continuation of the historical trend of the persistent proliferation of BLV within U.S. dairy herds.

We’ve long known that countries with the highest milk consumption also had the highest breast cancer incidence. And it’s not just a matchup between dairy consumption and breast cancer incidence on the country level. Individual women who are lactose intolerant and consume less dairy also seem to have decreased risk of breast cancer. Oh, but come on, there’s lots of stuff in milk that could be contributing to the cancer risk, like saturated fat and the presence of cancer-promoting growth hormones, like IGF-1.

Yes, we know bovine leukemia virus is present in marketed beef and dairy products. About half of milk and meat samples turn up positive for the virus. In fact, you can sample the virus straight out of the air on dairy farms, on surfaces, and in the milk itself. Most milk is pasteurized, but many dairy products, like raw aged cheeses are not. And who hasn’t eaten a pink-in-the-middle hamburger at some point in their life?

Yes, we have evidence that people are exposed to the virus. Yes, we have evidence that people are actively infected with the virus. But it wasn’t until 2015 that we learned infection rates were highest in cancerous breast tissue, so much so that as many as 37 percent of breast cancer cases may be attributable to exposure to the bovine leukemia virus. That was enough for me to trigger a whole series of videos on the role the virus plays in breast cancer, and how the meat and dairy industries responded to the news. Okay, now that we’re all back up to speed, what’s the latest update? That’s what I’ll cover next.

In 2015, researchers in California found bovine leukemia virus (BLV) stitched into the DNA of human breast cancer tumors from mastectomies at such higher rates than was found in normal breast tissue taken from breast reduction surgery that they calculated that as many as 37 percent of breast cancer cases may be attributable to bovine leukemia virus exposure, likely through the consumption of milk or meat obtained from infected animals.

In response, the milk and meat industries seemed more concerned about consumer confidence than consumer cancer. But scientifically, the research priority turned to: could the California results be replicated? The answer, it turns out, was yes. They were replicated among women in Iran. Replicated in Brazil. In Australia, the link was even stronger. In Texas, the same thing. Women diagnosed with breast cancer were found to be so much more likely to have bovine leukemia virus DNA in their breast tissue, compared with women without cancer, that the attributable risk was calculated at 51.82 percent––indicating that this meat and dairy virus could be responsible for at least one-half of the breast cancer cases among the women in Texas they studied.

All in all, six of the eight studies performed to date found the virus in human breast tissues, which suggests strongly that BLV does infect humans, and breasts can be targets of infection. Four of the five studies that were able to compare infection rates in cancerous tissue versus normal breast tissue found the odds of finding the virus in the tumors was, on average, four times higher.

How does that compare to other breast cancer risk factors? If you go on hormone replacement for five years, you can bump up your breast cancer risk by 30 percent. If you take the pill for more than a dozen years, your risk may go up 40 percent. If you’re obese when you’re older, your risk can go up 60 percent. Having a first-degree relative with breast cancer may double your risk. But having your breast infected with bovine leukemia virus may quadruple your risk, increase your risk by 100s of percent. The only risk factors more potent than BLV infection were having the BRCA gene mutations like Angelina Jolie has, or a high dose of ionizing radiation, like being in the wrong place at decidedly the wrong time.

Beyond confirmation, one study suggested that older patients had a greater likelihood of testing positive for bovine leukemia virus. That makes sense, if BLV is from exposure to dairy and meat. The older we get, the more meals we’ve had, and the more opportunities to become infected over time.

Researchers also discovered that the virus comes first, present in some breast tissues 3 to 10 years before cancer was diagnosed. “This argues against the idea of viral invasion of already malignant cells,” quashing the theory that maybe the virus is somehow just attracted to the cancer after the fact. Could this explain the consistent findings that breast cancer tissue is more likely to harbor infection? Again, the data showed no; the virus appeared to come first. This review doesn’t provide absolute proof that BLV is a cause of breast cancer, but based on the best available balance of evidence, BLV infection does indeed appear to be a breast cancer risk factor.

The latest revelation is that it’s now been found in human blood, too. This has a number of potential ramifications. Blood banks, for example, don’t screen for it. So, it’s possible you can get it from consuming meat or dairy, or getting blood from someone who consumed meat or dairy.

This could also mean that BLV could cause leukemia in people, too. It does in chimpanzees. Two infant chimps were fed milk from cows naturally infected with the BLV, and they both died of leukemia. We didn’t even know chimps could get leukemia.

This certainly suggests the possibility of transmission or induction of leukemia through the ingestion of milk from BLV-infected cows; or blood-borne spread could carry the virus to other organs. In cattle, the virus causes blood cancers, but this may be just because dairy cattle are turned into hamburger when they are still so young, so maybe they don’t have time for tumors to grow in other organs.

How concerned should we be about bovine leukemia virus? It is not clear yet whether this is a good news story or a bad news story. If subsequent studies show that BLV does cause breast cancer in humans, this will have significant repercussions for the dairy and cattle industries. But that means there is something we can do about it. Perhaps attempts should be made to eradicate the infection from cattle now, rather than wait for the final word. Twenty-one nations have eradicated BLV from their dairy cattle. In contrast, in the U.S., the BLV prevalence just keeps going up. If the industries are not going to step up and try to eliminate the disease, then the least they could do is eliminate some of the practices that spread the disease between animals.

BLV is spread via blood through contaminated needles, saw or gouge dehorners, tattoo pliers, ear taggers, hoof knives, nose tongs, and other tools of the agribusiness trade. Though in view of the emerging information about BLV in human breast cancer, it may be prudent to encourage the complete elimination of BLV in cattle, particularly in the dairy industry. The hope is that either way it may help reduce the scourge of breast cancer.

You Look Marvelous Just the Way you Are