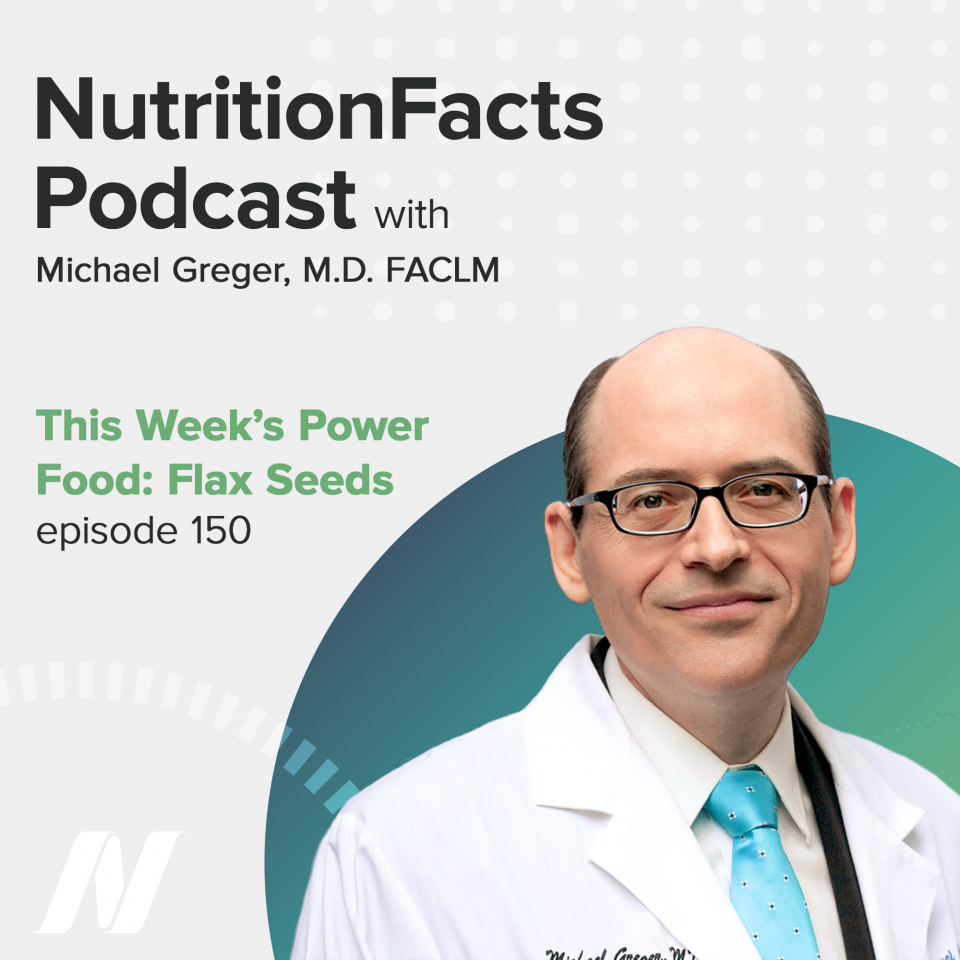 They have an amazing effect on our blood pressure, prostate, and even menstrual cycles.

This episode features audio from Flax Seeds for Hypertension and Just the Flax, Ma’am. Visit the video pages for all sources and doctor’s notes related to this podcast.

Today we continue with our series highlighting one special food that contains demonstrable health benefits.  And the star of today’s episode?  The incomparable flax seed.

In our first story, extraordinary results are reported reported in a rare example of a double-blinded, placebo-controlled, randomized trial of a dietary intervention (flaxseeds) to combat one of our leading killers, high blood pressure.

A recent article in the journal Meat Science acknowledged that “a sector of the population perceives meat as a food that is detrimental to their health” because of studies associating meat consumption with heart disease and cancer. “For these reasons, these meat consumers look for healthier food alternatives as a means to maintain good health;” so, this represents a good opportunity for the industry to develop some new products. Natural foods could be added to meat to reach those health-oriented consumers by boosting antioxidant levels, for example. Foods like flax seeds and tomatoes are healthy, associated with reduced risks of cancer and cardiovascular disease. So, by making flax seed-tomato burgers, they figure they can reduce saturated fat intake and less sugar somehow? It’s like their flax seed-fed pork idea, to produce “enriched lard.” Wouldn’t it be easier to just cut out the middle-pig and eat flax seeds ourselves?

Flax seeds have been described as a “miraculous defense against some critical maladies.” Now, I’m a fan of flax, but this title seemed a bit over exuberant; I figured something just got lost in translation. But then, I saw this study, and realized maybe that title was not too far off.

Rarely do we see a dietary study of this caliber. A prospective, double-blinded, placebo-controlled, randomized trial, you know how hard that is in a nutrition study? For drugs it’s easy, you take two identical looking pills: one’s active, one’s placebo, and until the end of the study neither the researcher nor the patient has any idea which is which, hence, double blind. But people tend to notice what they’re eating. So, how did they sneak a quarter cup of ground flax seeds into half of the people’s diets without them knowing? They created all these various flax or placebo-containing foods, and even added bran and molasses to match the color and texture; so, it was all a big secret until six months later, when they broke the code to see who ate which.

Why test it on hypertension? Because having a systolic blood pressure over 115,that’s the top number, may be the single most important determinant for death in the world today. If you take a bunch of older folks, most of them on an array of blood pressure pills and don’t improve their diet at all, despite the drugs, they may start out, on average, hypertensive and stay hypertensive six months later. But those who were unknowingly eating ground flax seeds every day dropped their systolic blood pressure about ten points, and their diastolic, the lower number, by about seven points. That might not sound like a lot, but a drop like that could cut stroke risk 46%, heart disease 29%, and that ten-point drop in the top number could have a similar effect on strokes and heart attacks. And for those that started out over 140, they got a 15-point drop. “In summary, flaxseed induced one of the most potent antihypertensive effects ever achieved by a dietary intervention.” In other words, the magnitude of this decrease in blood pressure demonstrated by dietary flax seeds, is as good or better than any other nutritional interventions, and comparable to many drugs, which can have serious side effects.

And they’re not exaggerating about the comparable to drugs bit. The flax dropped systolic and diastolic up to 15 and 7. Compare that to powerful ACE inhibitors, like Vasotec, which may only drop pressures only 5 and 2. Calcium channel blockers, like Norvasc or Cardizem, 8 and 3–half of what the flax can do.

Even if the flaxseeds can cut risk in half though, any avoidable risk is unacceptable. Right?  Well, isn’t high blood pressure just inevitable as we get older?  No, the prevalence of hypertension does increase dramatically with age, but not for everyone.  People who eat more plant-based diets or keep their salt intake low enough tend to not exhibit any change in blood pressure with advancing age.  So flax is great, but always better to prevent the disease in the first place.

Flax seed is one of the original health foods, treasured for its healing properties throughout the Roman Empire. One of the original medicines used by Hippocrates.  Mahatma Gandhi himself was right when he said, “Wherever flax seeds become a regular food item among the people, there will be better health.” Dr. Andrew Weil, one of the more reputable alternative medicine physicians, says that if we can make only a single dietary change, it should be to add flax seeds to our diet. Okay, but where do we find them, and how should we eat them?

Flax seeds are almost always in the bulk section of any natural food store. For about a dollar a pound, you’ve got like a two-month supply. There are brown ones and golden ones. They’re the same nutritionally, so pick your favorite color, I guess. They come with nature’s own finest packaging: a hard natural hull that keeps them fresh for up to a year, in an airtight container. Unfortunately, nature’s packaging is actually a little too good; if we eat flax seeds whole, they are likely to pass right through us, come out the other end, and not do us much good. So chew them really well, or grind them up in a coffee or spice grinder, a mini food processor, or a good blender. After they’re ground, store them in the refrigerator, and they’ll last a few months.

An easy way to get our daily intake is with a morning smoothie. Just put two tablespoons of flax seeds in a blender, grind them to powder, throw in some frozen berries, maybe half a frozen banana, some soy milk or almond milk (any of the so-called “motherless milks”). Flax seeds have this binding quality that makes for these thick, rich kind of milkshake-y type smoothies. In fact, you can use ground flax seed to replace eggs in baking. Just blend one tablespoon of ground flax with three tablespoons of water, until it gets all kind of gooey, for each egg in the recipe.

Ground flax is better than the flax seed oil. The seeds are little nutrition powerhouses, and we lose much of the nutrition when we just press out the oil. Not only are flax seeds the richest source of lignans, they are a great source of iron, zinc, copper, calcium, protein, potassium, magnesium, folate, soluble fiber which can lower our cholesterol and triglycerides, even boron, a trace mineral important for optimum bone health. We don’t get any of those, though, with just the flax seed oil. Another example of the importance of eating whole plant foods.

Flax seeds are incredibly powerful at dampening the effects of estrogen. Eating just a single tablespoon of ground flax seeds a day extends the length of a woman’s menstrual cycle; not the menses itself, but the whole month-long cycle by an average of about one day. So you have fewer periods throughout your life, which means less estrogen exposure, and lower breast cancer risk.

It’s good for men, too. Flax seeds were recently compared to a leading pharmacological treatment for enlarged prostates. The standard drug costs about $300 a year versus only about $10 perhaps for daily flax. This new study found they both work just as well as each other. But what about the side effects? Well, the drug can cause headaches, dizziness, diarrhea, and all sorts of abnormalities. Flax has some side effects too, though: it improves our cholesterol and blood sugar, controls our blood pressure, and helps control hot flashes though that’s not usually a big problem in sufferers of enlarged prostates.