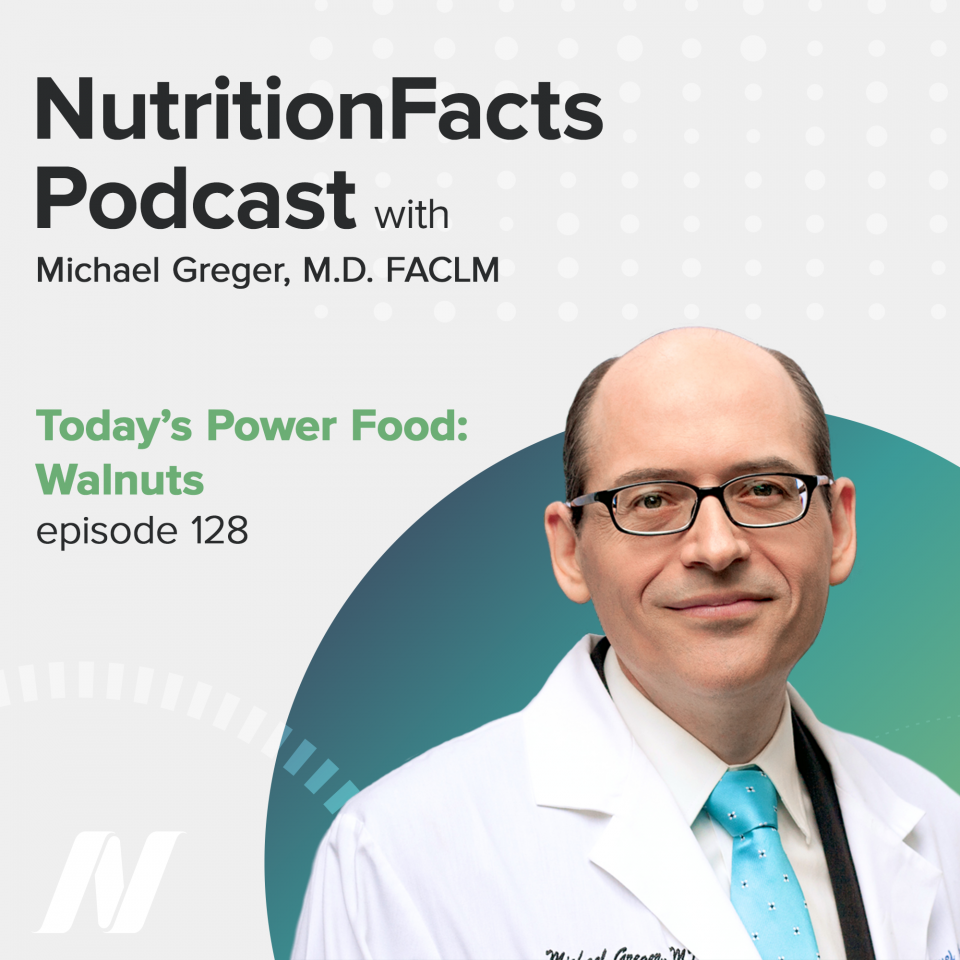 Today we begin the first in an occasional series – highlighting one healthy food with demonstrable health benefit.

This episode features audio from Walnuts and Artery Function, Black vs. English Walnuts, and Nuts May Help Prevent Death. Visit the video pages for all sources and doctor’s notes related to this podcast.

Now, I know I’ve made a name for myself in explaining how not to do certain things – just look at my books – How NOT to Die – and my upcoming book, How NOT to Diet.  But what I want to share with you is actually quite positive: what’s the best way to live a healthy life? Here are some answers.

Today we begin the first in an occasional series highlighting one special food that contains demonstrable health benefits.  And the star of today’s episode?  The mighty walnut.

Not eating walnuts may double our risk of dying from heart disease compared to at least one serving a week.

But, walnut consumption may only drop our cholesterol levels about 5%. How could we get a 50% drop in cardiac mortality from just a 5% drop in cholesterol? Walnuts must have some other heart-protecting benefits, besides just lowering cholesterol such as improving arterial function.

This review found five clinical trials analyzing the effect of nut consumption on the ability of our arteries to relax and open normally considered “an excellent ‘barometer’ of underlying vascular health.” Even after controlling for other risk factors, 80% of those with better-than-average arterial function survived cardiac event-free over the years, whereas 80% of those with below-average dilation didn’t.

So, eight studies to date on nuts and brachial artery function, and seven out of eight showed a significant improvement in arterial function; one showed a negligible effect; and none found nuts made things worse. Half the studies, though, used the added walnuts to replace foods in the diet known to have a negative effect on endothelial function.

For example, in this study, walnuts replaced meat and dairy, which have been shown to be detrimental, so, no wonder arterial function got better. When you do a study like that, you can’t tell if the benefits you’re seeing is because you’re adding good stuff, or getting rid of the bad.

And, in three of the other studies, nuts replaced olive oil, which tends to lead to a worsening of endothelial function thereby exaggerating the beneficial effects of the walnuts.

But, the other four studies, that just added nuts “as a snack or with a meal,” without replacing any specific foods, found nuts “significantly improved arterial functioning.” And, given their association with longevity, I encourage everyone to eat an ounce of nuts a day unless, of course, you’re allergic. Only about 1% of people report nut allergies, but still, that’s a significant “downside of nut consumption” for millions of Americans.

In our next story we discover a dramatic difference exists between the anti-inflammatory and antioxidant effects of black walnuts versus English walnuts.

The best way to keep and consume walnut oil is within the walnut itself. But, which is better for cardiovascular disease protection? Black walnuts, or English, also known as common walnuts.

Regular “English walnuts have been shown to decrease cardiovascular disease risk; however, black walnuts do not appear to have not been studied for their cardioprotective” benefits, until now. Maybe black are even better? Who do you think won the contest? Three choices: black best; English best; or the same.

I would have guessed black, just based on their rich color and flavor. But, I would have been wrong. English best.

They both tended to lower cholesterol. But, when participants were given a meal containing “a sandwich with salami and cheese on white bread smeared with” two spoonfuls of butter along with yogurt” and then a big handful of black or English walnuts, something very different happened.

When we whack our arteries with that kind of load of saturated animal fat, our blood vessels immediately, within hours, become inflamed and stiff. You eat English walnuts with the salami sandwich, though, and they’re so packed with anti-inflammatory goodness that you significantly lessen the impact.

“Black walnuts, however, did not improve endothelial function the cells of the arterial lining, which can be explained by nutritional differences between the nuts. English walnuts, for example have nearly 10 times as much antioxidant capacity as black.”

Finally we learn how Just a few small servings of nuts a week may increase our lifespan and lower our cancer risk.

We’ve known “increased nut consumption has been associated with a reduced risk of major chronic diseases, including heart disease and diabetes.” But do those who eat nuts actually live longer lives? “Clinical trials have shown” nuts help lower cholesterol and oxidation, and improve our arterial function, and blood sugar levels, but does this all translate into greater longevity?

Researchers at Harvard “examined the association between nut consumption and subsequent mortality” of over a hundred thousand people, followed for decades. In that time, tens of thousands died, but those that ate nuts every day lived significantly longer. Daily nut consumers had fewer cancer deaths, heart disease deaths, and fewer deaths from respiratory disease. And, this was after controlling for other lifestyle factors. So, nut consumers lived significantly longer whether they were older or younger, fat or skinny, whether they exercised more or smoked, drank, or ate other foods that may affect mortality.

But, nuts are so filled with fat. “There may be a concern that frequent nut consumption can result in weight gain.” However, that’s not what they found, and, in fact, other studies have associated nut consumption with a slimmer waist, less weight gain, and lower risk of obesity. If you look at all the studies put together, it’s pretty much a wash. Diets enriched with nuts do not seem to affect “body weight, body mass index, or waist circumference” much at all.

One of the most recent such studies, in which subjects were told to add to their diets either zero, 70, or 120 pistachios to their daily diet as quite an afternoon snack, every day for three months, and the results: can’t even tell which line is which whether they were eating no nuts, or over 100 a day. Hence, it appears, the incorporation of nuts about one or two small handfuls a day would be advisable to ensure various health benefits, without the risk of body weight gain. And, what was nice about this review is that there were no apparent ties to the nut industry.

How nuts do we have to go? Not much. Just a few servings a week may boost our lifespan and lower cancer rates. But, it appears we have to keep it up. In the PREDIMED study, when long-time nut eaters were told to cut down on eating nuts, or choose extra virgin olive oil, within five years, they apparently lost much of their longevity benefit. Only the group that started out eating nuts, and continued to eat at least the same amount of nuts, had the significant survival advantage.

We would love it if you could share with us your stories about reinventing your health through evidence-based nutrition. Go to NutritionFacts.org/testimonials. We may be able to share it on our social media to help inspire others. To see any graphs charts, graphics, images or studies mentioned here, please go to the Nutrition Facts Podcast landing page. There you’ll find all the detailed information you need plus links to all the sources we cite to each of these topics.

NutritionFacts.org is a nonprofit, science-based public service, where you can sign up for free daily updates on the latest in nutrition research via bite-sized videos and articles. Everything on the website is free. There’s no ads, no corporate sponsorship. It’s strictly non-commercial. I’m not selling anything. I just put it up as a public service, as a labor of love, as a tribute to my grandmother – whose own life was saved with evidence-based nutrition. Thanks for listening to Nutrition Facts. I’m your host, Dr. Michael Greger.