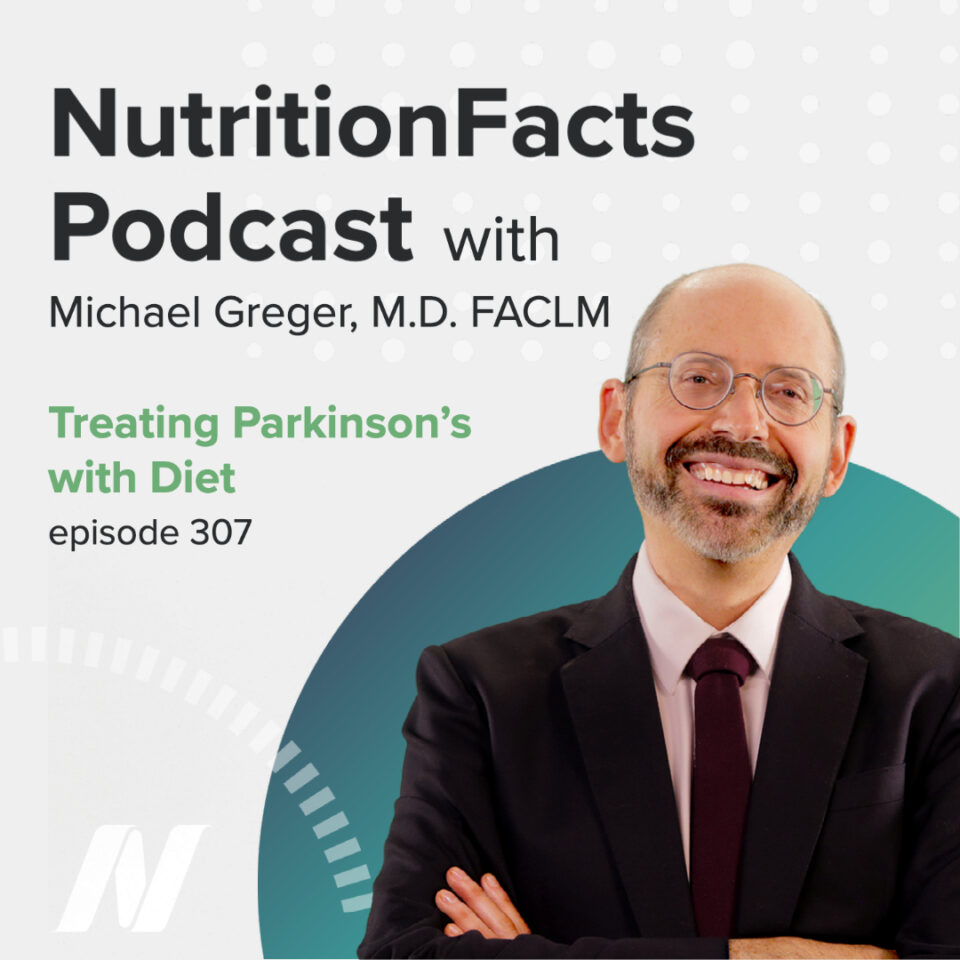 Parkinson’s is one of the fastest growing neurological condition in the world – and though there is currently no cure for the disease – there are dietary changes that can significantly improve symptoms of the disease. And, we start today – with the potential benefits of coffee.

“When James Parkinson first described the classical symptoms of the disease, he could hardly foresee the evolution of our understanding over the next two hundred years,” like the role of nutrition. Increasing Parkinson’s disease risk with high dietary intakes of animal fat, iron, mercury, and dairy products, whereas the intake of antioxidants and a plant-based dietary pattern may be protective.
“Plant-based diets are known to preserve body tissues from oxidative stress and inﬂammation, both hallmarks of chronic degenerative diseases” like Parkinson’s. On the contrary, animal-based foods, particularly rich in animal proteins and saturated fats, are correlated with the promotion of neurodegenerative diseases––in addition to some of the leading killers like cancer, heart disease, diabetes, etc.
Not all plants are necessarily good, though. For example, the potential neurotoxicity of graviola, a fruit known as soursop. Consumption of soursop can lower blood pressure and uric acid levels but may also cause an atypical form of Parkinson’s disease, because the fruit contains neurotoxic compounds. And indeed, population studies do show a link between the overconsumption of soursop with neurodegenerative disease.
Yes, those who follow a predominantly plant-based diet may show the lowest prevalence and incidence of Parkinson’s disease, but plant-based nutrition is not just about reducing the risk but can be used to manage the disease.
In my video Treating Parkinson’s Disease with Diet, I discussed this case report, in which a diet low in animal fat and including both whole grains every day, as well as one to two cups of strawberries a day, seemed to be effective in reducing symptoms of Parkinson’s disease. But there are like 20,000 edible plants out there, and only a limited number of them have been studied for anti-Parkinson’s activity.
One plant that’s gotten a lot of attention is coffee, which may exert a protective eﬀect against the development of Parkinson’s and may even help slow down the progression of the disease––based on studies like this that show that Parkinson’s patients who drink coffee or caffeinated tea appear to cut their risk of dying prematurely in half. But correlation doesn’t mean causation. You don’t know if caffeine really works until you put it to the test.
Caffeine for the treatment of Parkinson disease: a six-week randomized placebo-controlled double-blind study. The caffeine group was started out at approximately a cup of coffee’s worth of caffeine twice a day, once in the morning and once after lunch, and then increasing it to two cups worth twice a day, which would be like four cups of black tea twice a day or six cups of green. And…a significant improvement in Parkinson’s symptoms within three weeks compared to placebo. A cheap, safe, simple treatment for Parkinson’s, though an important limitation was the duration of the study. Caffeine has what’s called a “tachyphylactic” property, meaning its effect tends to diminish over time with repeated use (at least when trying to combat sleepiness); so, it would be really nice to see the study repeated over a longer time frame. But there was no such longer study until…five years later. Randomizing Parkinson’s patients to about two cups of coffee worth of caffeine twice a day for not six weeks, but more than six months, and…no benefit over placebo. Drats.
Caffeine did not provide sustained symptomatic benefit after all. So, caffeine may have a short-term benefit, which quickly dissipates. Regardless, caffeine cannot be recommended as symptomatic therapy for Parkinson’s.

In our next story, we look at how low levels of neurotoxic chemicals in cheese may explain the connection between dairy product consumption and Parkinson’s disease.

Four things that we can do that may reduce our risk of developing Parkinson’s disease are exercise, avoiding dairy products, pesticides, and avoid getting hit in the head (which means wearing your seatbelt, bike helmet), and—if you read journal articles written by scientists with way too much time on their hands—avoid getting attacked by extraterrestrials, a leading cause of traumatic brain injury in comic books.
What about avoiding pesticides and other industrial pollutants? A recent autopsy study found higher levels in the brains of Parkinson’s victims of PCBs found in Monsanto’s Aroclor, which was banned in 1979, but still pollutes the world. And, the more PCBs found in the brain, the worse the brain damage. The worst three PCBs appeared to be numbers 138, 153, and 180—the levels of all of which are significantly lower in the bodies of those eating plant-based diets.
So, “Does a vegan diet reduce risk [of] Parkinson’s disease?” Good question. Well, we know that every single prospective study on dairy products or milk and Parkinson’s disease tended to find increased risk. It may be that “dairy products in the United States are contaminated with neurotoxic chemicals.” There’s substantial evidence suggesting that “exposure to pesticides may increase Parkinson’s disease risk,” and autopsies found higher levels of pollutants and pesticides in the brains of Parkinson’s disease patients, and some of these toxins are present at low levels in dairy products.
They’re talking about toxins like tetrahydroisoquinoline, a Parkinsonism-related compound found predominantly in cheese. Although the amounts of this neurotoxin—even in cheese—are not really high, the concern is that the chemical may accumulate in the brain over long periods of consumption.

Finally, today – we look at how plant-based diets in general may be used to successfully treat Parkinson’s disease—in part, by boosting L-DOPA levels.

Caffeine consumption, both in Asian and Western populations, appears to protect against the development of Parkinson’s disease. But, what if you already have it?
A new study found that giving folks the equivalent of about two cups of coffee a day worth of caffeine significantly improved symptoms of the disease. Of course, there’s only so much you can charge for coffee; so, drug companies took caffeine and added a side group so they could patent it into new drugs, which appear to work no better than plain caffeine—which is dramatically cheaper, and probably safer.
Similarly, other plant foods, such as berries, may be protective. And, plant-based diets, in general, may help prevent Parkinson’s. Animal fat and dairy may increase risk, whereas “a plant-based diet dietary pattern may protect against [Parkinson’s disease].” We don’t know if it’s the animal fat per se, though; it could be the animal protein that’s increasing risk, or maybe it’s the dairy, the mercury in fish, the blood-based heme iron, or less of the protective antioxidants in plant foods and plant-based diets. We didn’t know, until recently.
There have been successful case reports, like this one, in which a dietician was struck down with Parkinson’s, and she was able to clear most of her symptoms with a plant-based diet rich in strawberries, whole wheat, and brown rice—rich sources of these two phytonutrients. But, there hasn’t been a formal interventional trial published—until now.
At its root, Parkinson’s is a dopamine-deficiency disease, because of a die-off of dopamine-generating cells in the brain. These cells make dopamine from L-dopa, derived from certain amino acids in our diet. But, just like we saw with the serotonin story, the consumption of animal protein may block the transport of L-dopa into the brain, crowding it out.
So, at first, researchers tried what’s called a “protein redistribution diet.” Let’s basically only let people eat meat for supper, so that patients are hopefully sleeping by the time the negative effects kick in. But researchers didn’t consider cutting out animal products altogether, until it was discovered that fiber consumption naturally boosts L-dopa levels. So, hey, “a plant-based diet, particularly in its vegan variant, is expected to raise levodopa bioavailability and bring some advantages in the management of [Parkinson’s] disease through two mechanisms: a reduced protein intake and an increased fiber intake…”
That’s why plant protein works best, because that’s where fiber is found. So, they put people on a strictly vegan diet, keeping beans towards the end of the day, and indeed found a significant improvement in symptoms.

What Is H. Pylori?

Go Easy on the Cheese