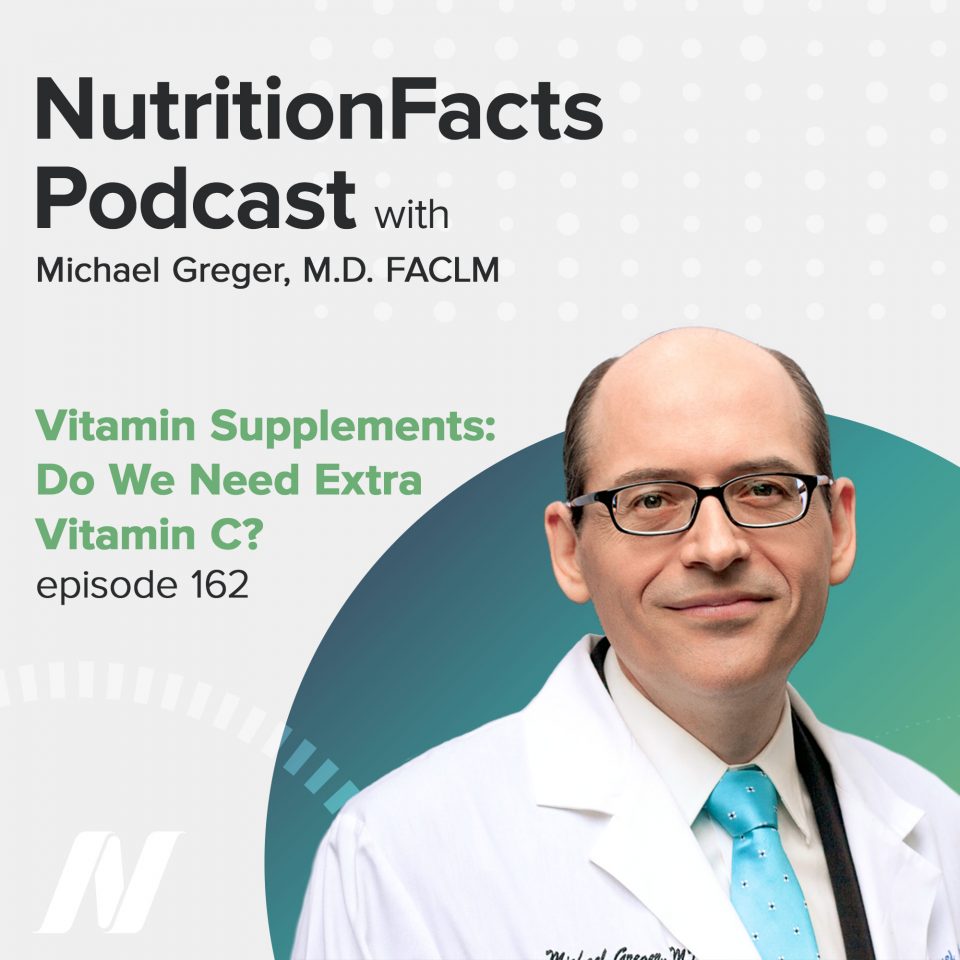 Today we take a close look at the effects of vitamin C supplements.

This episode features audio from Are Vitamin C Pills Good For You?, Do Vitamin C Supplements Prevent Colds but Cause Kidney Stones?, and Treating Bacterial Vaginosis with Vaginal Vitamin C. Visit the video pages for all sources and doctor’s notes related to this podcast.

Today we continue our series on vitamin supplements with a close look at the effect of supplemental vitamin C.  In our first story we learn what apparent effect vitamin C supplements have on our lifespan.

Last year we learned that vitamin A and vitamin E supplements weren’t just a waste of money, but we were actually paying to live, on average, a shorter life, whereas vitamin D supplements were shown to increase our lifespan.

No effect on lifespan, heart attack risk, or cancer risk; just, apparently, a waste of money.

Next up, the benefits and risks of supplemental vitamin C.

Mainstream medicine has long had a healthy skepticism of dietary supplements, extending to the present day. “Enough is enough.” But, this commentary in the Archives of Internal Medicine argued we may have gone too far, as evidenced by our “uncritical acceptance” of supposed toxicities; the surprisingly “angry, scornful tone” found in medical texts, with words like “careless, useless, indefensible, wasteful, and insidious,” as well as ignoring evidence of possible benefit.

“To illustrate the uncritical acceptance of bad news” about supplements, they discuss the well-known concept that “high-dose vitamin C can cause kidney stones.” But, just because something is “well known” in medicine doesn’t mean it’s necessarily true. They couldn’t find a single reported case. We’ve known that vitamin C is turned into oxalates in the body, and if the level of oxalates in the urine gets too high, stones can form. But, even at 4,000 mg of vitamin C a day (that’s like a couple gallons of orange juice’s worth), urinary oxalates may not get very high.

But, you know, there may be rare individuals that have increased capacity for this conversion into oxalate, and so, a theoretical risk of kidney stones with high-dose vitamin C supplements was raised in a letter printed in a medical journal back in 1973. Okay, but when it’s talked about in the medical literature, they make it sound like it’s an established phenomenon. Here’s a reference to seven citations, supposedly suggesting an association between excessive vitamin C intake and “the formation of oxalate kidney stones.” Let’s look at the cited sources. Okay, there’s the letter about the theoretical risk; that’s legit, but this other citation has nothing to do with either vitamin C or kidney stones, and the other five citations are just references to books, which can sometimes be okay, if the books cite primary research themselves. But, instead, there’s like this circular logic, where the books just cite other books, that like cite that theoretical risk letter again. So, it looks like there’s a lot of evidence, but they’re all just expressing this opinion with no new data.

Now, by that time, there were actually studies that followed populations of people taking vitamin C supplements, and found no increased kidney stone risk among men. Then later, women, the same thing. So, you can understand this author’s frustration that vitamin C supplements appeared to be unfairly villainized.

The irony is that now we know that vitamin C supplements do indeed appear to increase kidney stone risk. This population of men was followed further out, and men taking vitamin C supplements did indeed end up with higher risk confirmed now in a second study, though also of men. We don’t know if women are similarly at risk, though there’s now also been a case reported of a child also running into problems.

What does doubling of risk mean exactly, in this context? That means those taking like 1,000 milligrams a day of vitamin C may have a 1 in 300 chance of getting a kidney stone every year, instead of a 1 in 600 chance, which is not an insignificant risk: 1 in 300. Kidney stones can be really painful; so, they conclude that, look, since there’s no benefits, and some risk, better to stay away.

But, there are benefits. Taking vitamin C just when you get a cold doesn’t seem to help, and regular supplement users don’t seem to get fewer colds. But, when they do get sick, they don’t get as sick, and get better about 10% faster. And, those under extreme physical stress may cut their cold risk in half. So, it’s really up to each individual to balance the potential common cold benefit with the potential kidney stone risk.

A study published in 1999 raised the exciting possibility that “cheap, simple, innocuous, and ubiquitous vitamin C supplements could prevent a condition known as pre-eclampsia.” But, a decade of research later, we realized that was merely a false hope, and that vitamin C supplements appear to play little role in women’s health.

But, they’re talking about oral vitamin C, not vaginal vitamin C, which has been found to be an effective treatment for bacterial vaginosis: an all-too-common gynecological disorder characterized by a fishy-smelling, watery-gray discharge.

Bacterial vaginosis “can best be described as an ‘ecological disaster’ of the vaginal microflora.” The normal lactobacillus-type good bacteria get displaced by an army of bad bacteria. Probiotics may help, repopulating with good bacteria, but the reason the bad bacteria took over in the first place was that the pH was off.

I’ve talked about the role diet may play in the development of this condition. For example, “saturated fat intake may increase vaginal pH,” allowing for the growth of undesirables. So, why not try to re-acidify the vagina with ascorbic acid, otherwise known as vitamin C? Now, this isn’t just plain vitamin C tablets, but specially formulated “silicon-coated” supplements that release vitamin C slowly, so as to not to be irritating. How well do they work? 100 women suffering from the condition split into two groups, and the vaginal vitamin C beat out placebo.

But how does vitamin C compare to the conventional therapy, an antibiotic gel? This is an important question. “Although perceived as a mild medical problem,” bacterial vaginosis may increase the risk of several gynecological complications, including problems during pregnancy, where you want to avoid taking drugs whenever possible.

The vitamin C appeared to work as effectively as the antibiotic. And so, especially like in the first trimester when you really don’t want to be putting drugs up there, vitamin C can really help. And, for women with recurrent episodes, using the vitamin C for six days after each cycle appears to cut “the risk of recurrence” in half.

Everything on the website is free. There’s no ads, no corporate sponsorship. It’s strictly non-commercial. I’m not selling anything. I just put it up as a public service, as a labor of love, as a tribute to my grandmother. whose own life was saved with evidence based nutrition.

Chew Your Way to Good Health

5 responses to “Vitamin Supplements: Do We Need Extra Vitamin C?”