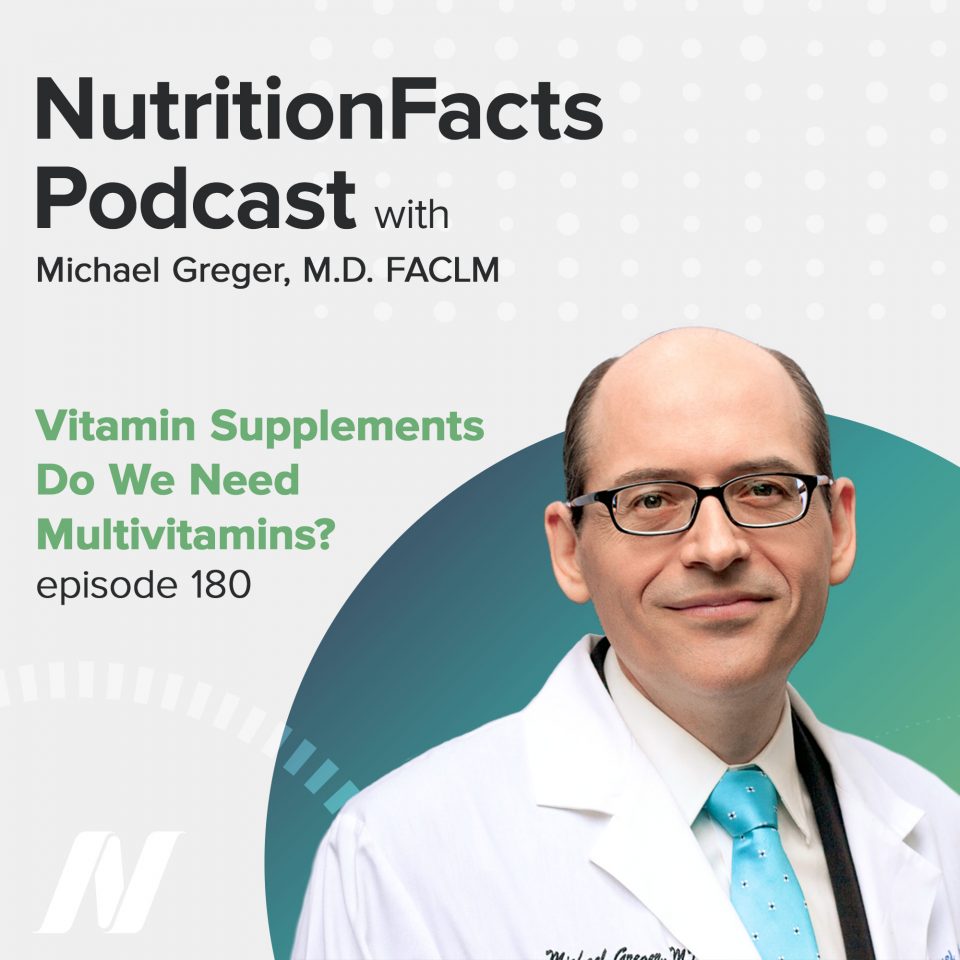 Today we continue our series on vitamin supplements.

This episode features audio from Should We Take a Multivitamin? and Are Multivitamins Good for You?. Visit the video pages for all sources and doctor’s notes related to this podcast.

Today we continue our series on vitamin supplements with a close look at Multivitamins.  Do we need them?  And what role do they play in heart disease, cancer, and longevity?

About one in three Americans takes a multivitamin. Is that helpful, harmful, or just harmless a waste of money? In 2011, the Iowa Women’s Health Study reported that multivitamin use was “associated with a higher risk of total mortality” meaning, in effect, women who took a multivitamin appeared to be paying to live shorter lives. But this was an observational study, meaning they didn’t split them up into two groups, and put half on multivitamins to see who lived longer. They just followed a large population of women over time, and found that those that happened to be taking multivitamins were more likely to die. But, maybe, they were taking multivitamins because they were sick? The researchers didn’t find any evidence of that. But, ideally, we’d have a randomized, double-blind, placebo-controlled trial; thousands of people followed for over a decade; half given a multivitamin, and half a placebo, and see what happens. And, that’s what we got the following year, in 2012. The Harvard Physicians’ Study II. And, after a decade, no effect on heart attack, stroke, or mortality.

The accompanying editorial concluded that multivitamins are a “distraction from effective cardiovascular disease prevention. The message needs to remain simple and focused:” heart disease can be largely prevented by healthy lifestyle changes.

They did, however, find that for men with a history of cancer, the multivitamin appeared to be protective against getting cancer again though there was no significant difference in cancer mortality, or cancer protection, in those who’ve never had cancer before. Still, though, that’s pretty exciting. It is just one study, though. Ideally, we’d have, like, twenty of these placebo-controlled trials, and then compile all the results together.

And, that’s what we got in 2013 ”a meta-analysis of randomized controlled trials.” Twenty-one of them, covering more than 90,000 individuals, and ”no influence on mortality” either way. Some found more cancer mortality; some found less cancer mortality; but all and all, it was a wash.

And, that was heralded as good news. I mean, after the Iowa Women’s Health Study came out, we were worried multivitamins could be harming millions of people. But, instead, they don’t appear to have much effect either way. The accompanying editorial asked, “Should meta-analyses trump observational studies?” I mean, Iowa Women’s Health Study followed tens of thousands of women for nearly twenty years. Well, what if we put all the studies together, the big observational studies, along with the experimental trials? And, that’s what we got in December 2013 concluding that multivitamins appear to offer “no consistent evidence” of benefit for heart disease, cancer, or living longer.

Why, though? Aren’t vitamins and minerals good for us? Well, “one explanation for this result could be that our bodies are so complex that the effects of supplementing a few components is generally ineffective or actually does harm.” Maybe, we should get our nutrients in the way nature intended.

The accompanying editorial concluded “Enough is Enough; we should Stop Wasting our Money on Vitamin and Mineral Supplements.” Americans spend billions on such supplements. “A better investment in health would be eating more fruits and vegetables.” Imagine if we instead spent those billions on healthy food?

With the money we save on pills, we can buy more of the best multivitamins on earth.

One on One with Klaus Mitchell