Chia seeds, one of the main crops grown in the Western Hemisphere, have been eaten for more than 5,000 years, and flaxseeds, among our richest sources of essential omega-3 fatty acids, have been proven to be helpful for a variety of conditions.

How do they compare nutritionally? What effect do they have on weight loss, blood sugar, cholesterol, blood pressure, and inflammation?

How to Eat Chia Seeds and Flaxseeds

Chia seeds and flaxseeds are so small. Can we just sprinkle the whole seeds onto our food, or do we need to grind them like we would peppercorns or black cumin?

While you can eat the seeds whole, grinding them is even better. They come in nature’s finest packaging: a hard natural hull that keeps them fresh. However, Mother Nature packs them a little too well. If you eat chia seeds or flaxseeds whole, they’re likely to pass right through you without releasing any of their nutrients. So, for best results, first grind up the seeds with a blender or coffee or spice grinder, or buy them preground or “milled.” (The other option is to chew them really well.)

For example, as you can see in thegraphs below and at 0:26 in my video Which Are Better: Chia Seeds or Flaxseeds?, eating two tablespoons of whole chia seeds every day for ten weeks led to no change in omega-3 levels, but consuming the same amount of ground (or milled) chia seeds led to a significant increase in blood levels of both short-chain and long-chain omega-3s. 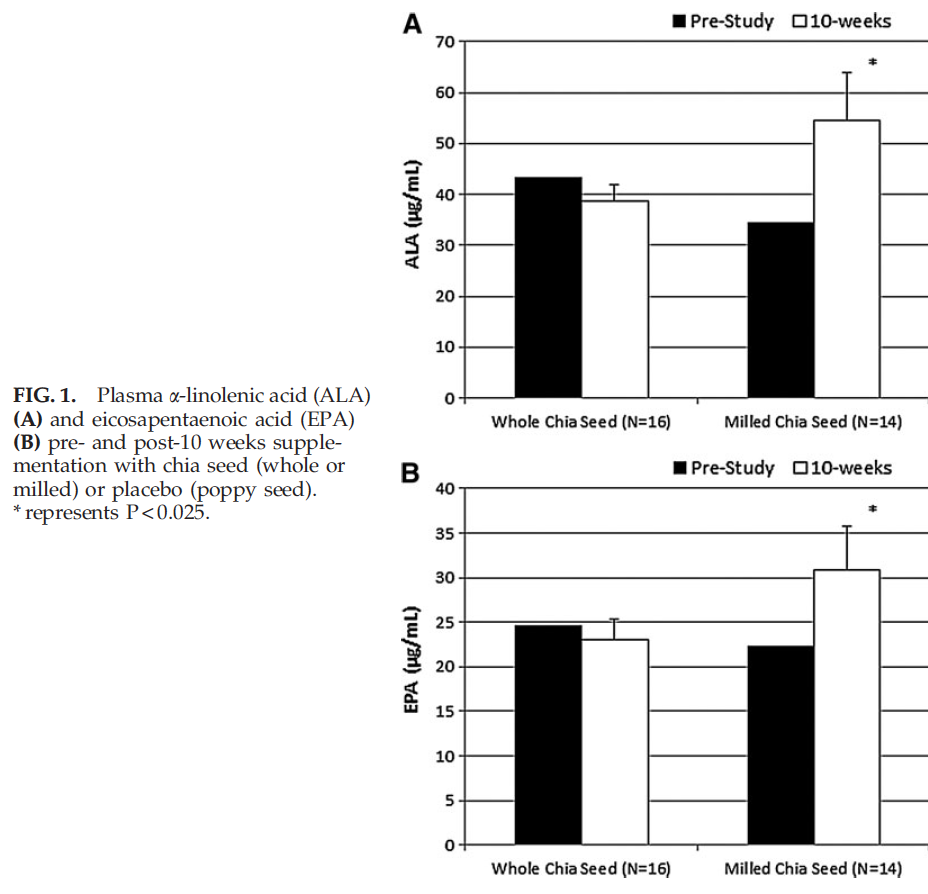 “Ingestion of…milled chia seed compared to whole chia seed or placebo…appeared to have no influence on inflammation or disease risk factors,” though. As well, there was no change in body fat, blood sugar, cholesterol, blood pressure, C-reactive protein, or any of the other markers of inflammation, as you can see below and at 0:47 in my video. 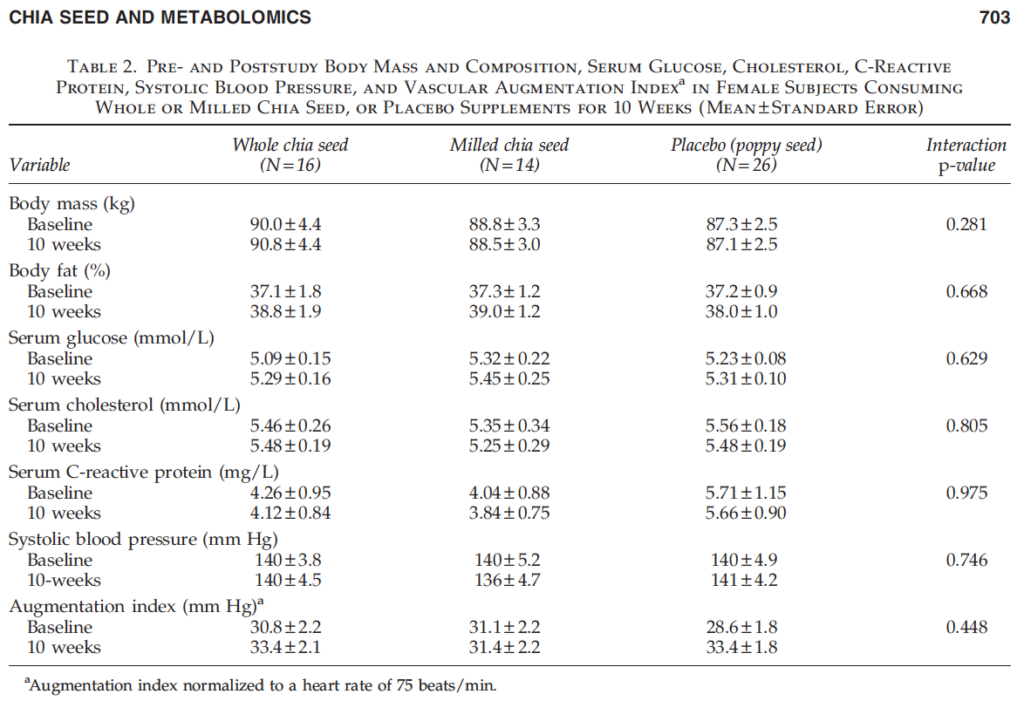 Another way I enjoy chia seeds is as a replacement for eggs and oil in baking. Simply mix one part chia seeds and nine parts water, and then let it sit for a bit to create a chia gel that can be used as an egg or oil replacer in baked goods.

Benefits of Chia Seeds vs. Flaxseeds

Chia seeds and flaxseeds are both exceptionally high in fiber and omega-3 fatty acids. In fact, I’m so enamored with flax that my Daily Dozen calls for at least one tablespoon of ground flaxseeds each day. What else do we get from these tiny seeds?

The Benefits of Chia

A study purported to show that, compared to control, the chia group had a significant reduction in levels of C-reactive protein, an indicator of systemic inflammation. But, when you look closely at the data, you can see that was only because there was a significant worsening in the placebo group, who had been given a couple of tablespoons of wheat bran a day instead of chia. So, it wasn’t that the chia group got significantly better; the control group just got significantly worse, as you can see at 1:22 in my video.

Whenever researchers appear to exaggerate their results, that’s a red flag signaling you to check their funding source. In this case, they didn’t disclose any conflicts of interest. Five years later, however, the truth came out. The study was indeed funded by a chia company. What’s more, the lead investigator had filed a patent to use chia seeds to treat diseases. Why wasn’t any of this disclosed when the study was originally published? Because the journal’s conflict-of-interest policy didn’t specifically require disclosing such information.

In the end, the researcher abandoned the patent, likely because subsequent studies found no significant benefits for weight loss, blood sugar, cholesterol, blood pressure, or inflammation after eating a quarter cup of chia seeds each day for three months, as you can see in the tables below and at 2:16 in my video. The original study, however, did show a significant drop in blood pressure, which was replicated by other researchers. 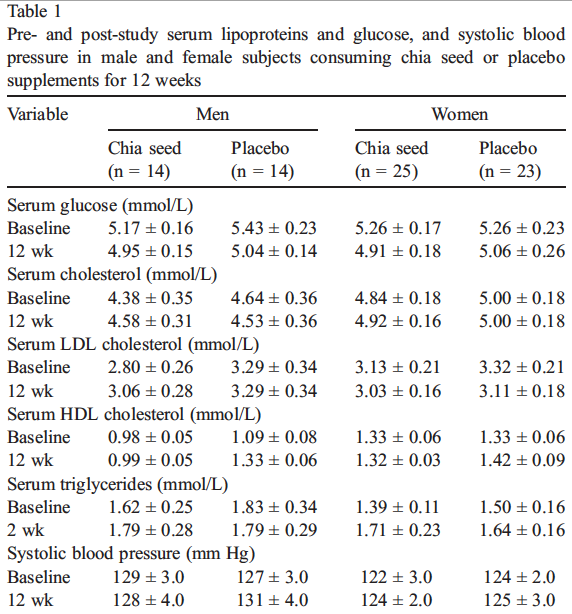 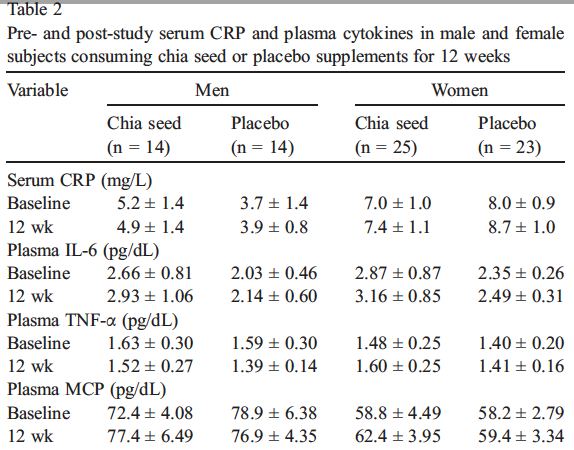 For an update on the potential of chia seeds for weight loss, check out Do Chia Seeds Help with Belly Fat?.

The Benefits of Flax

More potent effects have been found with ground flaxseeds. The primary reason I prefer flaxseeds over chia seeds is the lignan content of flax, which averages about 15 times more than other seeds, including sesame and chia. This is thought to explain the anti-cancer effects of flaxseeds for both prevention and survival.

Other benefits of flaxseeds include:

You can learn more about flaxseeds and cancer from my videos, including:

To find out more about what flaxseeds can do, check out: