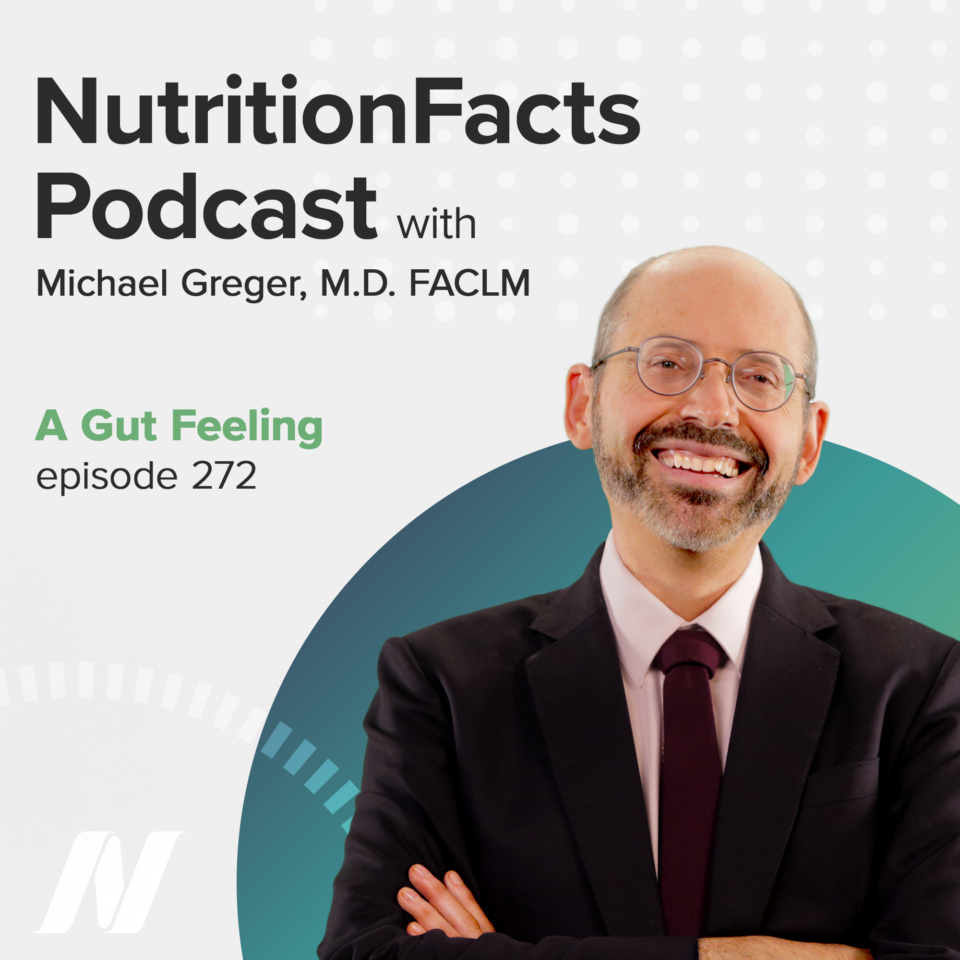 Today, on the Nutrition Facts Podcast, we discover why well-balanced gastrointestinal tract is key to our health and well-being.

This episode features audio from Can Vegan Fecal Transplants Lower TMAO Levels? and Fasting for Irritable Bowel Syndrome. Visit the video pages for all sources and doctor’s notes related to this podcast.

Today, it’s all about the gut – otherwise known as the gastrointestinal tract. And we’ll start with a study that looks at the microbiome of those eating plant-based diets.

Almost 2,500 years ago, Hippocrates stated that “All disease begins in the gut.” Feed our gut bacteria right, with whole plant foods, and they feed us right back, with beneficial compounds like butyrate, which gut bugs make from fiber. Feed them wrong, on the other hand, and they can produce detrimental compounds, like TMAO, which our gut bugs make from cheese, seafood, eggs, and meat.

Now, we used to think that TMAO only contributed to cardiovascular diseases, like heart disease and stroke. But more recently, it has been linked with everything from psoriatic arthritis to polycystic ovary syndrome. I’m most concerned about our leading killers, though. If you look at the top ten causes of death in the United States, we know about heart disease and stroke, killers #1 and #5, but recently, an association has been found between blood levels of TMAO and the risks of various cancers, killer #2. It could be the inflammation caused by TMAO that explains the link between TMAO and cancer, but it could also be oxidative stress (free radicals), DNA damage, or a disruption in protein folding.

Killer #6 is Alzheimer’s disease. Does TMAO even get up into the brain? Yes, TMAO is present in human cerebrospinal fluid, which bathes the brain, and indeed, the levels are higher in both those with mild cognitive dysfunction and those with Alzheimer’s disease dementia. In the brain, TMAO has been shown to induce neuronal senescence (meaning deterioration with age), increased oxidative stress, and impaired mitochondrial function––all of which may contribute to brain aging and cognitive impairment.

Killer #7 is diabetes, and people with higher TMAO levels are approximately 50 percent more likely to have diabetes, too. Killer #8 is pneumonia, and TMAO predicts fatal outcomes in pneumonia patients, even without evident heart disease. Killer #9 is kidney disease, and TMAO is strongly related to kidney function, and predicts fatal outcomes there as well. Over a period of five years, more than half of chronic kidney disease patients who started out with average or higher TMAO levels were dead, whereas among those in the lowest third of levels, nearly 90 percent remained alive.

Okay, so how can we lower the TMAO levels in our blood? Because TMAO originates from dietary sources, we could limit our intake of choline and carnitine-rich foods. But they’re so widespread. We’re talkin’ meat, eggs, and dairy. Therefore, restriction of foods rich in TMAO-creating nutrients may not be practical. I mean, can’t we just get a vegan fecal transplant? Vegan donors were kind enough to provide the investigators with a fresh morning sample.

If you remember, if you give a vegan a steak, despite all that carnitine in the meat, they make almost no TMAO compared to a meat-eater, presumably because they haven’t been fostering steak-eating bugs in their gut.

Remarkably, even if you give plant-based eaters the equivalent of a 20-ounce steak every day for two months, only about half start ramping up production of TMAO, showing just how far their gut flora had to change. The capacity of veggie feces to churn out TMAO is almost nonexistent. So, instead of eating healthier, why not just get some of that sweet vegan poop off the brown market.

In a double-blind, randomized, controlled trial, research subjects either got vegan poop or their own poop back. The complete stool production was stirred—not shaken—and then infused through a hose down their nose, and…it didn’t work.

First of all, the vegans they recruited for their study started out making TMAO themselves, as opposed to the other study where they didn’t make any at all. This may be because the other study required the vegans to have been vegan for at least a year, and this study didn’t. So yeah, not much of a change in TMAO running through their bodies two weeks after getting the vegan poop, but the vegan poop they got seemed to start out with some capacity to produce TMAO in the first place.

So, the failure to improve after the vegan fecal transplant could be related to limited baseline microbiome differences, as well as the continuation of an omnivorous diet after the transplant. What’s the point of trying to reset your microbiome if you’re just going to eat meat? Well, the researchers didn’t want to switch people to a plant-based diet, since they knew that alone can change your microbiome, and they didn’t want to introduce any extra factors. Bottom line—no pun intended—it looks like there may not be any shortcuts. We may just have to eat a healthier diet.

Did you know that more than half of IBS (Irritable Bowel Syndrome) sufferers appear to have a form of atypical food allergy? Here’s the story.

Irritable bowel syndrome (IBS) is a chronic gastrointestinal disorder that affects about one in ten. You may have heard about low-FODMAP diets, but they don’t appear to work any better than the standard advice to avoid things like coffee or spicy and fatty foods. In fact, you can hardly tell which is which.

But most IBS patients do seem to react to specific foods, such as wheat, dairy, soy sauce, or eggs. Though when you test them for typical food allergies, they may come up negative on skin prick tests. But what you want to know is not what happens on their skin, but inside their gut when they eat them. Enter: confocal laser endomicroscopy. How cool is this? You can snake a microscope down someone’s throat into their gut, and drip on some foods, and watch in real-time as the gut wall becomes inflamed and leaky. You can actually see the cracks forming within minutes. But it had never been tested on a large group of IBS patients––until now.

Using this new technology, researchers found that more than half of IBS sufferers have this kind of reaction to various foods, what they call an atypical food allergy that flies under the radar of traditional allergy tests. Exclude those foods from the diet, and you get a significant alleviation of symptoms. But outside of a research setting, there’s no way to know which foods are the culprit without trying your own exclusion diet. And there’s no greater exclusion diet than excluding everything.

A 25-year-old woman had complained of abdominal pain, bloating, and diarrhea for a year, and drugs didn’t seem to help. But after fasting for 10 days, her symptoms improved considerably, and appeared to stay that way at least 18 months later. And it wasn’t just subjective improvement. They took biopsies that showed the inflammation go down, directly measured her bowel irritability, and stuck expanding balloons and electrodes in her rectum to actually measure changes in her sensitivity to pressure and electrical stimulation. Fasting seemed to kind of reboot her gut.

But just because it worked for her doesn’t mean it works for others. Case reports are most useful when they inspire researchers to put it to the test.

Despite research efforts, medical treatment for this condition is still unsatisfactory. We can try to suppress the symptoms with drugs, but what do we do when even that doesn’t work? In a study of 84 IBS patients, 58 of whom failed basic treatment (which consisted of pharmacotherapy and brief psychotherapy), 36 of the 58 who were still suffering underwent 10 days of fasting, whereas the other 22 stuck with the basic treatment. And those in the fasting group experienced significant improvements in abdominal pain, diarrhea, loss of appetite, nausea, anxiety, and interference with life in general, which was significantly better than the control group. The researchers concluded that fasting therapy could be useful for treating moderate to severe patients with IBS.

Unfortunately, patient allocation was neither blinded nor randomized; so, the comparison to the control group doesn’t mean much. They were also given IV vitamins—vitamin B1 and vitamin C, which seems typical of these Japanese fasting trials, even though one would not expect vitamin deficiency syndromes—beriberi or scurvy—to present within just 10 days of fasting.

Psychological approaches appear to work about as well as antidepressant drugs for IBS, but the placebo response for IBS is on the order of 40 percent, and that’s whether you’re talking about psychological interventions or drugs or alternative medicine approaches. So, essentially nothing—a sugar pill—improves symptoms 40 percent of the time. So, I figure one might as well choose a therapy first that’s cheap, safe, simple, and side effect-free, which extended fasting is most certainly not. But if all else fails, it may be worth exploring under close physician supervision.