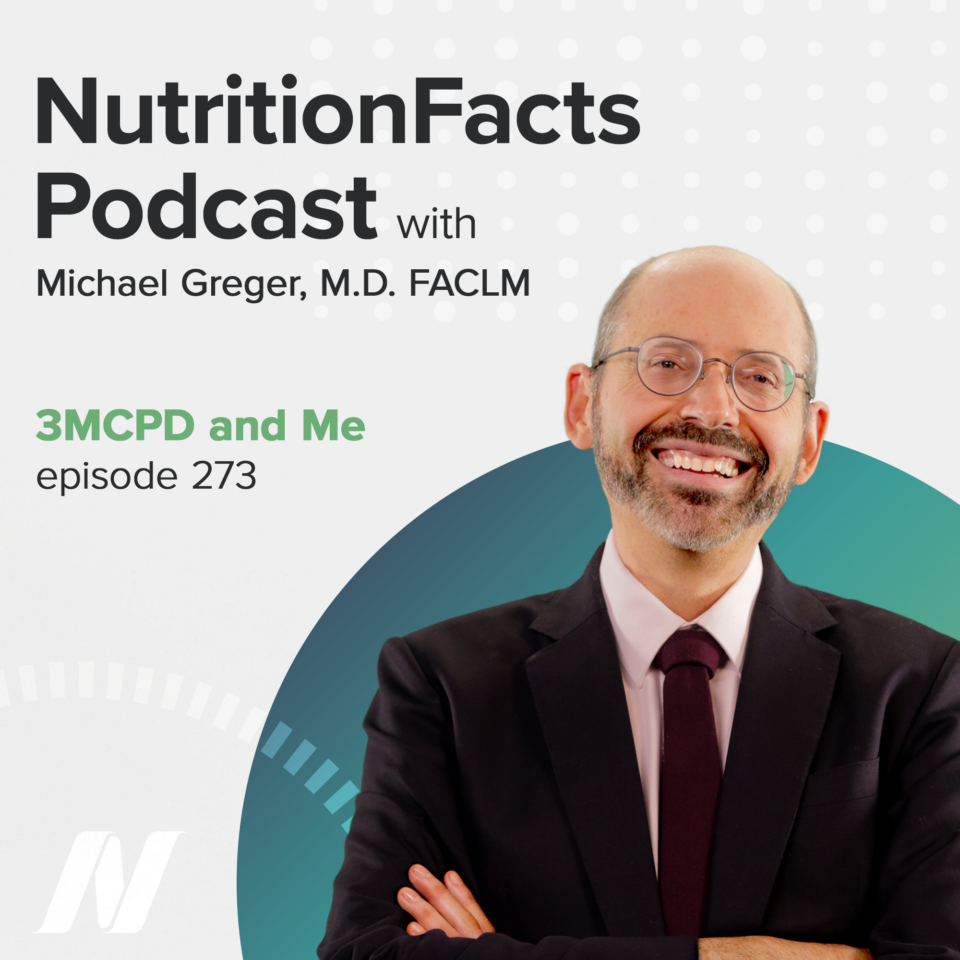 You’ll want to avoid this chemical contaminant and carcinogen that is found in many of the foods we eat.

This episode features audio from The Side Effects of 3-MCPD in Bragg’s Liquid Aminos and 3-MCPD in Refined Cooking Oils. Visit the video pages for all sources and doctor’s notes related to this podcast.

Today, it’s all 3MCPD – all the time. And if you’re wondering what in the world I’m talking about, all you need to know is one word – chlorohydrin. It’s a compound found in items like Bragg’s liquid aminos and soy sauce. But is it safe? Let’s find out.

In 1978, chlorohydrins were found in protein hydrolysates. What does that mean? Proteins can be broken down into amino acids using a chemical process called hydrolysis, and free amino acids like glutamate can have taste-enhancing qualities. That’s how they make cheap soy sauce and seasonings like Bragg’s liquid aminos. This process requires high heat, high pressure, and hydrochloric acid to break apart the protein. The problem is that when any residual fat is exposed to these conditions, it can form toxic compounds called chlorohydrins. But when I say toxic, we’re talking about toxic to mice and rats.

Chlorohydrins like 3-MCPD are considered a worldwide problem of food chemistry, but no clinical studies on humans have been reported so far. The concern is about detrimental effects on kidneys and fertility. In fact, there was a time in which it was considered as a potential male contraceptive because it could so affect sperm production. However, research funding was withdrawn after unacceptable side effects were observed in primates. They found flaccid testes in rats, which is what they were going for, but it caused neurological scars in monkeys.

What do you do, though, when there are no studies in humans? How do you set some kind of safety factor? Well, it’s not easy. What you do is take the lowest-observed-adverse-effect level in animal studies, which in this case was kidney damage, then add in some kind of fudge factor, and arrive at an estimated tolerable daily intake, which for 3-MCPD means that high level consumers of soy sauce may exceed the limit. But this was based on extraordinarily high contamination levels. Since then, Europe introduced a regulatory limit of 20 parts per billion of 3-MCPD in hydrolyzed vegetable protein products like liquid aminos and soy sauce. The U.S. standards are much laxer, though, allowing 50 times more—1,000 parts per billion.

I called Braggs to see where they fell, and the good news is that they are doing independent third-party analysis of their liquid aminos for 3-MCPD. The bad news is that despite my pleas that they be fully transparent, they wouldn’t let me share the results with you. I have seen them, though, but I’m only allowed to confirm they comfortably meet the U.S. standards, but fail the European standards.

This is just the start of the 3-MCPD story. If you test people’s urine for 3-MCPD or its metabolites, 100 percent of people turn up positive, confirming that it’s a widespread food contaminant. But 100 percent of people aren’t downing soy sauce or liquid aminos every day. But remember, the chemical resulted from a reaction with residual vegetable oil. When vegetable oil itself is refined, when it’s deodorized and bleached, those conditions also lead to the formation of 3-MCPD.

And indeed, we’ve known for years that various foods are contaminated. In what kind of foods have these kinds of chemicals been detected? Well, if it’s in the oils and fats, then it’s in the greasy foods made from them: margarine, baked goods, pastries, deep-fried foods, and fatty snacks like potato and corn chips, as well as infant formula.

So most people don’t have to worry about this problem, unless you’re a consumer of fried food. For example, someone weighing about 150 pounds who eats 116 grams of doughnuts would exceed the maximum tolerable daily intake, even if that was their only source of exposure. Now, that’s about two doughnuts. But the same limit-blowing amount of 3-MCPD could be found in only five French fries.

In our final story, we learn about another reason to avoid palm oil, and we question the authenticity of extra-virgin olive oil.

Palm oil is the most commonly used vegetable oil in the world today. Pick up any package of processed junk in a box, bag, bottle, or jar, and the odds are it will have palm oil. Not only does it contain the primary cholesterol-raising saturated fat found mostly in meat and dairy, concerns have been raised about the safety of palm oil, given the finding that it may contain a potentially toxic chemical contaminant known as 3-monochloropropane-1,2-diol, otherwise known as 3-MCPD, which is formed during the heat treatment involved in the refining of vegetable oils. So, these contaminants end up being widespread in reﬁned vegetable oils and fats, and any products that contain them, including infant formulas.

It’s been found in all refined vegetable oils, but some are worse than others. The lowest levels of the toxic contaminants were found in canola oil, and the highest levels were found in palm oil. Based on the available data, this may result in a signiﬁcant amount of human exposure, especially when used to deep-fry salty foods like French fries. In fact, just five fries could blow through the tolerable daily intake. Now, if you just do this once in a while, it shouldn’t be a problem, but if you’re eating fries every day or so, this could definitely be a health concern.

Because the daily upper limit is based on body weight, particularly high exposure values were calculated for infants who were on formula rather than breast milk, since formula is made from refined oils, which—according to the European Food Safety Authority—may present a health risk. Estimated U.S. infant exposures may be three to four times worse.

If infants don’t get breast milk, there is basically no alternative to industrially-produced infant formula. Given that fact, the vegetable oil industry needs to find a way to reduce the levels of these contaminants, and in the meanwhile, this is yet another reason that breast is always best.

What can adults do to avoid exposure? Well, if these chemicals are created in the refining process of oils, what about sticking to unrefined oils? Refined oils have up to 32 times the 3-MCPD compared to their unrefined counterparts, with the exception of toasted sesame oil. Sesame oil is unrefined (they just squeeze the seeds), but because they are squeezing toasted sesame, the 3-MCPD may have come pre-formed.

Virgin oils are by definition unrefined. They haven’t been deodorized, the process by which most of the 3-MCPD is formed. In fact, that’s how you can discriminate between the various processing grades of olive oil. If your so-called extra virgin olive oil contains MCPD, then it must have been diluted with some refined olive oil. The ease of adulterating extra virgin olive oil, the diﬃculty of detection, the economic drivers, and the lack of control measures contribute to the susceptibility of extra virgin olive oil to fraud. How widespread a problem is it?

Of the 88 bottles off store shelves tested that were labeled extra virgin olive oil, only 33 were found to be authentic. Okay, but what if you stick to the top-selling imported brands of extra virgin olive oil? In that case, 73 percent of those samples failed. Only about one in four appeared to be genuine, and not a single brand had even half their samples pass the test.