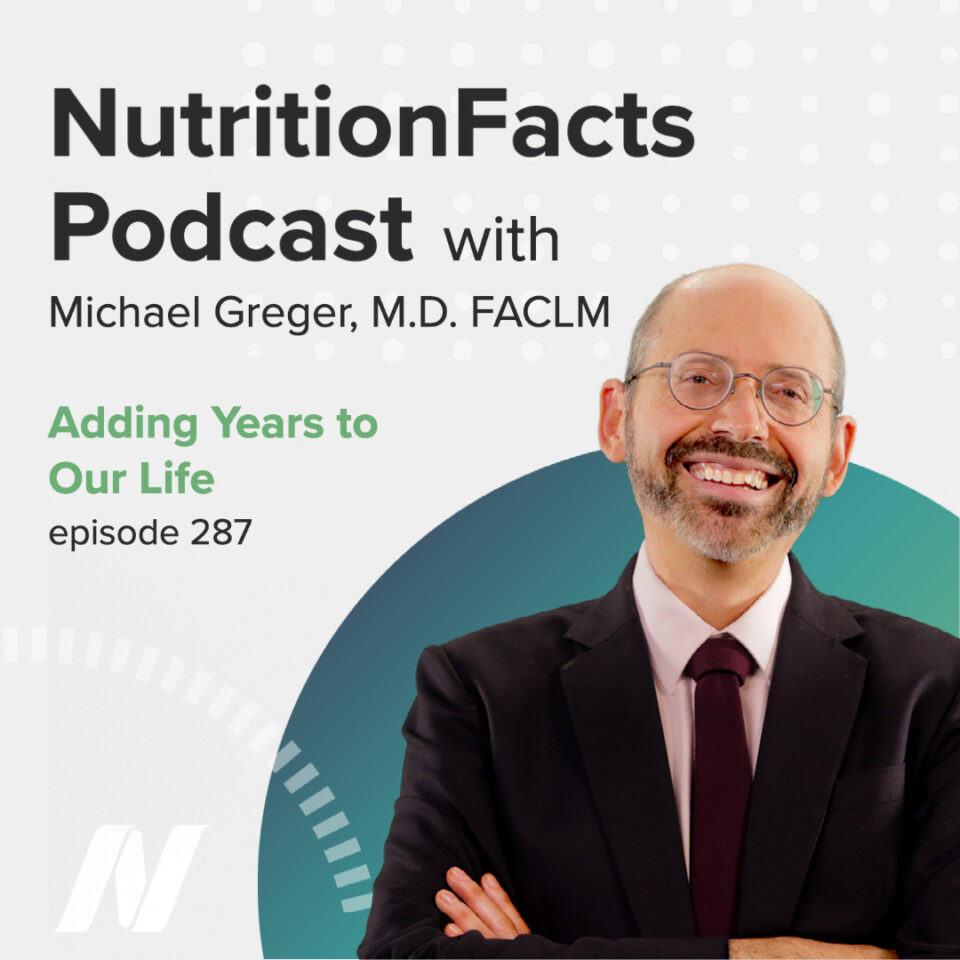 We haven’t discovered the fountain of youth, but we have found a very busy hormone that may hold a key to longer life. This episode features audio from Life Extension with FGF21 and How to Boost FGF21 with Diet for Longevity. Visit the video pages for all sources and doctor’s notes related to this podcast.

Welcome to the NutritionFacts podcast.

Most of us want to live longer. And if we could locate that fountain of youth – we would probably take a sip or two. However, there is a hormone already in our body that does something very similar. It’s a longevity hormone called FGF21. Here’s our first story.

In the year 2000, a new human hormone was discovered. It was the 21st documented fibroblast growth factor; so, they called it FGF21. Since its discovery, FGF21 has emerged as a key agent for promotion of metabolic and artery health, leanness, and longevity. Inject it into fat monkeys, and they lose body weight without reducing food intake, and not just a little—a 27 percent drop in body fat eating the same amount. In mice, it increases their lifespan 30 to 40 percent, comparable to lifelong caloric restriction, but again was achieved without decreasing food intake. The researchers conclude that FGF21 could potentially be used as a hormone therapy to extend lifespan in mammals, which has gotten big pharma salivating, raising the question “Can aging be ‘drugged’?”

And that’s not all it can do. The idea that one drug can treat obesity, diabetes, dyslipidemia (like high cholesterol), and hypertension all at once might have seemed impossible a few years ago, but is now a tantalizing and exciting prospect. The reason you can’t just give people straight FGF21 is that it gets rapidly broken down in the body; so, you’d have to get injections like every hour or two around the clock. So, drug companies are trying to patent a variety of longer-acting FGF21 look-alikes. And indeed, give people a little PF-05231023, and they can lose about 10 pounds in 25 days, along with dramatic drops in triglycerides and cholesterol.

But then, the side effects of these new-fangled drugs started cropping up. Okay, so what about this: we package the FGF21 gene into a virus, and then inject the virus and have it stitch extra FGF21 genes into our DNA. Or you can just lace on your running shoes. Exercise boosts FGF21 levels, which may in fact be one of the reasons exercise is so good for us.

Okay, but what can we do with food? Yeah, you could try engineering and injecting it, but wouldn’t it be easier to just stimulate our own endogenous, natural production through diet? One way is through no diet at all. You may have noticed it’s been dubbed the starvation hormone. That’s because fasting induces FGF21, but not just a day or two.

Physiologically, FGF21 expression is markedly increased in response to fasting/starvation. But, unlike mice, who show an increase after just six hours of fasting, humans don’t get a notable surge in FGF21 until after a week. Fasting can quadruple FGF21, but it takes 10 days of fasting, which is the very poster child of an unsustainable eating pattern.

So, how do you get the benefits without the starvation? Might a ketogenic diet be able to mimic the fast? Nope. Keto diets don’t work. In fact, keep it up for a few months, and you can actually get a significant decline in levels. High-fat diets may even interfere with the boost you get from exercise., seen here in a study of high intensity interval training.

What kind of diet does work, then? We’ll find out next.

In our next story, we look at how fasting and exercise can boost the longevity hormone FGF21.  But what can we eat—or avoid eating—to get similar effects?

Over a century ago, fasting was hailed not only as a means of combating “cerebral lassitude,” but also for the prolongation of healthy longevity. If that turns out to be true, FGF21 might be a missing link. FGF21 is characterized as a systemic enhancer of longevity. It can be boosted through prolonged fasting, but thankfully there are other, less drastic measures, such as more carbs or less protein.

Give people lots of starchy foods, and you can shoot up FGF21 levels. The healthiest sources would likely be whole grains and beans, since butyrate appears to boost FGF21, too, and we get that from fiber. That’s one of the things our good gut bugs make from fiber-rich foods.

Circulating FGF21 levels are also increased dramatically when you eat a lower protein diet. Over 150% increase within four weeks. And when I say protein restriction, it can just be restricting protein intake, down from the typical excess that most Americans get, down to the recommended amount.

The recommended daily allowance of protein for most men is 56 grams of protein a day, though most American men are getting over 100. So, if you take men getting the typical excess of about 112 grams a day and reduce them down to 64, which again is still more than the recommended 56—so the protein “restricted” group was still getting more than enough protein—you can essentially double FGF21 levels in the blood. That may help explain why despite them getting significantly more calories, they lost more body fat. How can you eat 300 more calories a day and still lose two more pounds of straight body fat? By just bringing your protein levels down to normal levels. Who hasn’t fantasized about a diet that allows ingestion of excess calories that are burned off effortlessly by ramping up fat burning? So, maybe we should play down protein to play up metabolism, thanks to FGF21.

Even just a quite modest protein restriction regimen down to recommended levels may have significant clinical benefits. Now, this was after a month and a half. A similar study found that even less protein restriction, taking men down to just 73 grams a day, resulted in a six-fold increase in FGF21 within a single week, accompanied by a significant increase in insulin sensitivity. They conclude that “dietary protein dilution” promotes metabolic health in humans.

Evidence suggesting that a lower protein intake is positively associated with increased health, survival, and insulin sensitivity has continued to mount, but we weren’t sure exactly how. Maybe FGF21 provides an explanation. Interestingly, the studies were feeding people nine percent of calories from protein, which is what the Okinawans were getting when they were one of the healthiest, longest-living populations in the world.

FGF21 has been proposed as a potential mediator of the protection from cancer, autoimmune diseases, obesity, and diabetes afforded by strictly plant-based diets. Maybe that’s one of the reasons that whole food plant-based diets have been shown to have such extraordinary results. Take Dr. Esselstyn’s work, for example, showing that the number one killer of men and women can be largely halted or reversed, and risk of heart attack almost eliminated, with the help of a whole food, low-fat vegan diet. This benefit cannot be attributed solely to cholesterol reduction, as we have these new powerful cholesterol-lowering drugs now that can force cholesterol levels as low as healthy eaters but appear to have less effect. So, the marked benefits reported by Esselstyn evidently reflect a variety of protective mechanisms associated with whole food plant-based diets, and FGF21 may be one of those mechanisms. So, it’s not just the fat and cholesterol, but the quantity and quality of protein may also be playing a role. But there’s never been a study to see whether vegans do indeed have higher levels of FGF21…until now.

I’m glad I didn’t just pass on this study based on the title. In addition to studying New Zealand obese mice, they investigated the circulating FGF21 levels among those eating plant-based, and then put it to the test by removing meat from other people’s diets to see if FGF21 would go up. And…FGF21 levels were markedly higher in vegan humans compared with omnivores, and they went up when the omnivores were switched to vegetarian diets after just four days. And not just a little. FGF21 levels increased by 232 percent after just four days free of meat.

The bottom line is that “the various fasting approaches are likely to have limited efficacy, particularly on aging and conditions other than obesity, unless combined with high-nourishment diets such as the moderate calorie intake and mostly plant-based Mediterranean or Okinawa low-protein diets,” by which they mean the recommended amount of protein.

Just Say No to Meth (ionine)