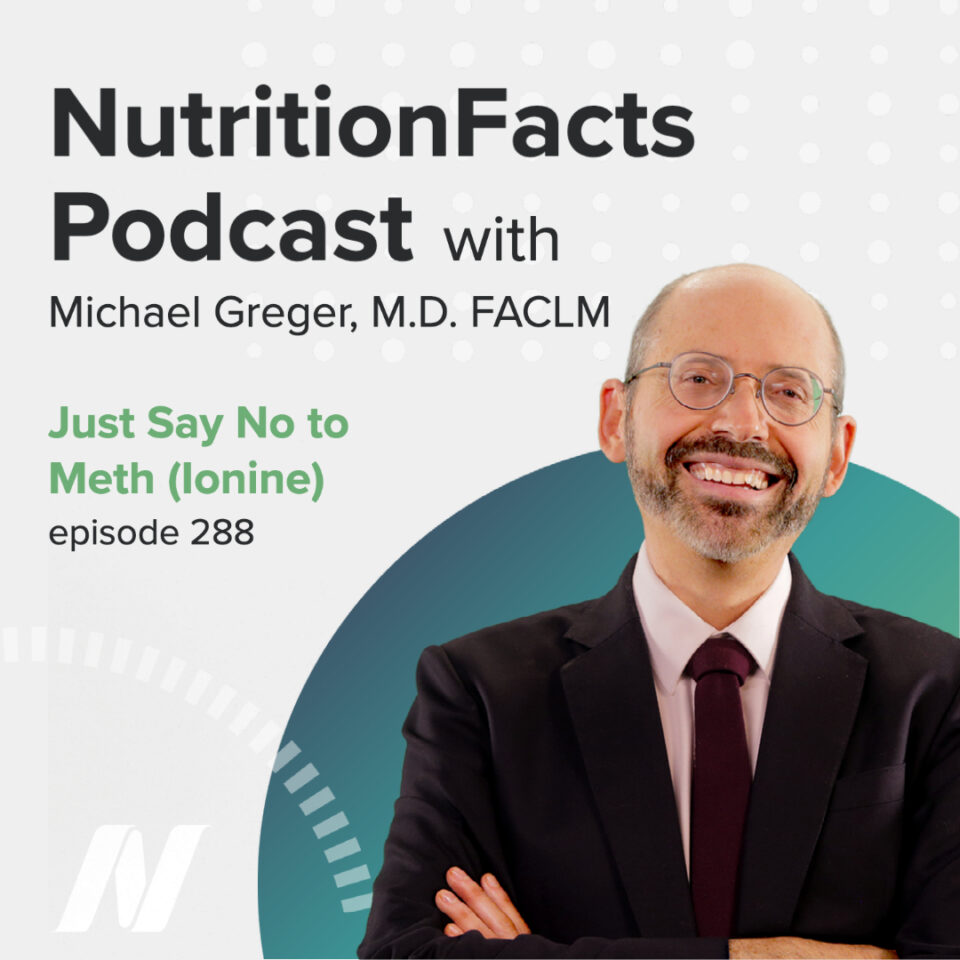 Welcome to the NutritionFacts podcast – with the latest peer-reviewed research on the best ways to eat healthy – and live longer.

They don’t sell this kind of meth – in a back alley. In today’s story – we look at the ill effects of an excess of  Methionine, an amino acid that can cause cancer tumors to grow and our lifespan to shrink.

This recent review, noting that “vegan diets,” in part because they tend to be naturally low in methionine, “may prove to be a useful nutritional strategy in cancer growth control,” also looked at “methionine restriction” and “lifespan extension.” It seems that the less methionine there is in body tissues, the longer different animals tend to live. But, what are the “possible implications for humans?”

I’ve talked before about the “free radical theory of aging”—this concept that aging can be thought of as the oxidation of our bodies, just like rust is the oxidation of metal. And, methionine is thought to have a “pro-oxidant effect.” So, the thinking is that lower methionine intake leads to less free radical production—the so-called “reactive oxygen species,” which slows the rate of DNA damage, which then would slow the rate of DNA mutation, slowing the rate of aging and disease—thereby potentially increasing our lifespan.

There are three ways to lower methionine intake: caloric restriction (they call it dietary restriction here); meaning, like, you cut your intake of food in half—for example, only eating every other day. That would lower your methionine intake. Or, because methionine is found concentrated in certain proteins, you could practice protein restriction across the board—eating a relatively protein-deficient diet. Or, the third option is to eat enough food; eat enough protein—but, just eat plant proteins, because they are relatively low in methionine.

Caloric restriction is hard, because you walk around starving all the time. Something like every-other-day eating “is never likely to gain much popularity as a pro-longevity strategy for humans.” So, “it may be more feasible to achieve moderate methionine restriction, in light of the fact that [plant-based] diets tend to be relatively low in this amino acid.” As we’ve seen, “plant [products]…tend to be lower in methionine than animal [products] .”

Yes, protein restriction across the board can be performed to avoid the hunger of caloric restriction. But, again, methionine restriction “could also be performed emphasizing low-methionine, high-quality vegetable sources of protein. Among foods containing [plant] proteins, [legumes] are especially rich in essential amino acids, offering excellent substitutes for proteins of animal origin.”

The fact that beans have comparatively low methionine has been “classically considered…[a] disadvantage.” But, given “the capacity of [methionine restriction] to decrease the rate of [free radical] generation in internal organs, to lower markers of chronic disease, and to increase maximum longevity, ironically converts such ‘disadvantage’ into a strong advantage and [it] fits well with the important role of [beans] in healthy diets like the [traditional] Mediterranean diet. Interestingly, [soy] protein is also especially poor in methionine, and it is widely considered that [soy]-containing foods have healthy effects in human beings.”

Now, on a population level, folks could benefit from just lowering their protein intake, period. “The mean intake of proteins (and thus methionine) of Western human populations is much higher than needed. Therefore, decreasing such levels…has a great potential to lower tissue oxidative stress and to increase healthy lifespan in humans while avoiding the possible undesirable effects of [caloric restriction].” We’re eating “twice as much protein” as we need, so the first thing we can recommend is just “decreasing the intake of protein…has…a large potential to bring health benefits.” But then, we can lower methionine even further, eating a plant-based diet.

“The reason [plant-based diets] are [so] protective is not known.” Yes, “vegetables contain thousands of phytochemicals,” but “separately investigating their possible protective role[s would be] an impossible task. The idea that the protective effect is not due to any of the [individual plant food] components, but to a [synergistic] ‘combined effect’ is gaining acceptance…However, based on the relationship of excess dietary methionine with toxicity to major vital organs, and its likely mechanism of action through increases in [free radical] generation, the possibility exists that the protective effects of [plant-based] diets can be due, at least in part, to their lower methionine content.”

This is not a new idea. It was proposed back in 2009, but is only now gaining increasing acceptance in more mainstream scientific circles. The idea that “low-methionine content of vegan diets may make methionine restriction feasible as a life extension strategy.”

In our next story, we learn how plant-based diets may prove to be a useful nutrition strategy – because these diets are naturally lower in methionine.

In designing an antibiotic, you wouldn’t create a drug that destroyed DNA, for example, because that’s something that both humans and bacteria share in common. It would kill bacteria, all right, but it might kill us, too. So, many antibiotics work by attacking the bacterial cell walls—something bacteria have, that we don’t.

Forty years ago, a landmark paper was published showing for the first time that many human cancers have what’s called absolute methionine dependency, meaning you can grow normal cells in a petri dish without giving them the amino acid methionine. “Normal cells thrive.” But, without methionine, cancer cells die. Normal breast cells, for example, grow no matter what—with or without. But, leukemia cells, they need that extra added methionine to grow, or they just flatline.

Anyway, methionine dependency is not just present in cancer cell lines in a petri dish. Fresh tumors taken from patients show that many cancers appear to have biochemical defects that make them methionine-dependent—”including [some] tumors of the colon, breast, ovary, prostate, and [skin].”

Chemo companies are fighting to be the first to come out “methionine-depleting drugs,” but, since “methionine is sourced mainly from food,” a better strategy may be to lower methionine levels by lowering methionine intake—eliminating high-methionine foods for cancer growth control.

Here’s the thinking –look. “Smoking cessation, consumption of diets rich in [plants],…and other lifestyle measures can prevent the majority of cancers.” Unfortunately, people don’t do them, and, “as a result, each year, hundreds of thousands of Americans develop metastatic cancer. Chemotherapy cures only a few types of metastatic cancer…Unfortunately, the vast majority of common metastatic cancers…[like breast, prostate, colon, and lung] are lethal. We, therefore, desperately need novel treatment strategies for metastatic cancer, andietary methionine restriction may be one such strategy.”

So, where is methionine found? Particularly chicken and fish. Milk, red meat, and eggs have less. But, if you really want to stick with lower methionine foods, fruits, nuts, veggies, grains, and beans. In other words, “methionine restriction may be achieved using a predominately vegan diet.”

So, why isn’t every oncologist doing this? “Despite many promising preclinical and clinical studies in recent years, dietary methionine restriction and other dietary approaches to cancer treatment have not yet gained wide[spread] clinical application. Most clinicians and investigators are probably unfamiliar with nutritional approaches to cancer. [Ah, that’s an understatement.] Many others may consider amino acid restriction as an ‘old idea,’ since it has been examined for several decades. However, many good ideas remain latent for decades if not centuries before they prove valuable in the clinic…With the proper development, dietary methionine restriction, either alone or in combination with other treatments, may [also] prove to have a major impact on patients with cancer.”

Adding Years to Our Life

Taking Personal Responsibility for Our Health