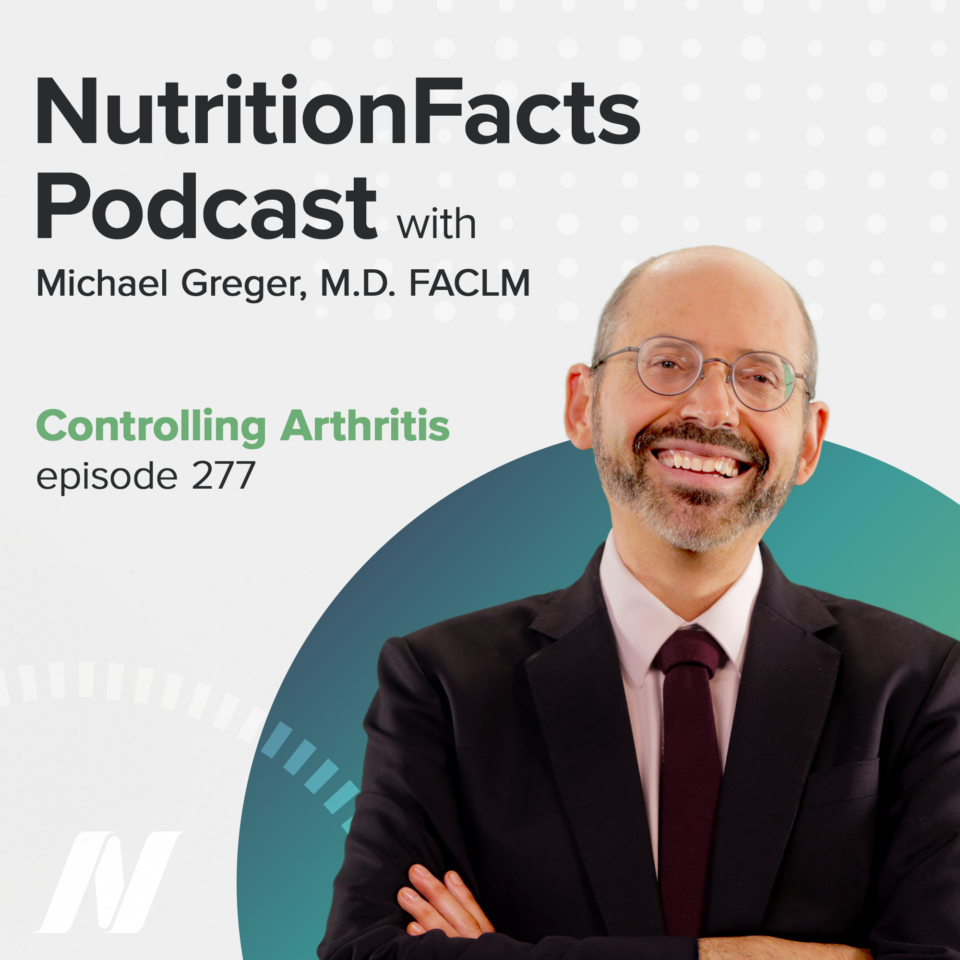 Fifty million people suffer from arthritis. Here are some ways to control the symptoms.

This episode features audio from Extra Virgin Olive Oil for Arthritis and Pomegranate: A Natural Treatment for Rheumatoid Arthritis. Visit the video pages for all sources and doctor’s notes related to this podcast.

Today on the podcast, we look at the best way to control osteo and rheumatoid arthritis – and we start with a look at what happens when topical olive oil is pitted against an ibuprofen-type drug.

Fifty million Americans suffer from arthritis, and osteoarthritis of the knee is the most common form, making it a leading cause of disability. Several inflammatory pathways underlie the onset and progression of the disease; so, various anti-inflammatory foods have been put to the test. Strawberries decrease the levels circulating in the blood of an inflammatory mediator known as tumor necrosis factor, but that doesn’t necessarily translate into clinical improvement. For example, drinking cherry juice can lower a sign of inflammation known as C-reactive protein, but it failed to help with the disease. But wait, it says it “provided symptom relief.” Yeah, it did, but no better than placebo, meaning drinking it was essentially no better than doing nothing. Cherries may help with another kind of arthritis called gout, but they failed when it came to osteoarthritis.

The same with pomegranate juice. No significant improvement in symptoms, but then again, no significant improvement in inflammatory mediators either; so, perhaps there’s no surprise. But strawberries did decrease inflammation. Let’s see if they actually help in a randomized, double-blind cross-over trial, and…dietary strawberries were indeed found to have a significant analgesic effect, causing a significant decrease in pain. There are tumor necrosis factor inhibitor drugs on the market now available for the low, low cost of only about $40,000 a year. For that kind of money, you’d want some really juicy side effects, and they do not disappoint, like an especially fatal lymphoma. I think I’ll stick with the strawberries.

One of the reasons we suspected berries might help is that if you give people the equivalent of either a cup a day of blueberries, or two cups a day of strawberries, and then drip their blood onto cells in a petri dish, you can see a significant blunting of inflammation, compared to those who got placebo berries. And note that the attenuation of inflammation got better with time;so, apparently the longer you eat berries the better. Are there any other foods that have been tested in this way?

Researchers in France harvested cartilage from knee replacement surgeries, and then exposed them to concentrates of the blood of volunteers who took a whopping dose of a grapeseed and olive extract. They saw a significant drop in induced inflammation. There haven’t been any human studies putting grape seeds to the test for arthritis, but an olive extract was shown to decrease pain and improve daily activities in osteoarthritis sufferers.

So, does this mean adding olive oil to one’s diet may help? No, because they used freeze-dried olive vegetation water. That’s basically what’s left over after you extract the oil from the olives; it’s all the water-soluble components. In other words, it’s all the stuff that’s in an olive that‘s missing from olive oil.

If you give people actual olives, a dozen large green olives a day, you can see a before versus after drop in an inflammatory mediator. But if you look at only the oil, a systematic review and meta-analysis on the anti-inﬂammatory beneﬁts of olive oil found there does not appear to be any.

So, should we just stick to olives? Sadly, a dozen olives a day could take up nearly half your sodium limit for the entire day.

When put to the test, extra virgin olive oil did not appear to help with fibromyalgia symptoms either, but it did work better than canola oil in alleviating symptoms of inflammatory bowel disease. Unfortunately, I couldn’t find any studies putting olive oil intake to the test for arthritis. But wait, (are you ready for this?) why is this video entitled Extra Virgin Olive Oil for Arthritis? Because it appears to work topically.

A double-blind, randomized, clinical trial of topical virgin olive oil versus a gel containing an ibuprofen-type drug for osteoarthritis of the knee. Just a gram of oil, which would be like less than a quarter teaspoon, three times a day. So that would cost less than three cents a day and…it worked! Topical olive oil was significantly better than the drug in reducing pain. And the study only lasted a month, so maybe the olive oil would have continued to work better and better over time.

What about the effectiveness of olive oil in controlling morning inflammatory pain of fingers and knees among women with rheumatoid arthritis? The researchers went all out, comparing the use of extra virgin olive oil, to just rubbing on nothing, to rubbing on that ibuprofen-type gel, and evidently the decrease in the disease activity score in the olive oil group beat out the others.

In our next story – Pomegranates are put to the test for weight loss, diabetes, COPD, prostate cancer, osteoarthritis, and rheumatoid arthritis.

In a landmark case that made it all the way up to the U.S. Court of Appeals before being denied review by the Supreme Court, POM Wonderful (the pomegranate juice company) vs. Federal Trade Commission, a panel of judges concluded that many of POM’s ads made misleading or false claims touting medical studies ostensibly showing that pomegranate products could help treat various ailments, including heart disease, prostate cancer, and erectile dysfunction, and the First Amendment does not protect deceptive and misleading advertisements. Striking a blow to its billionaire owners, the Court ruled that at least one randomized clinical trial could be required to substantiate any claims of treating or preventing disease.

Does pomegranate consumption affect weight in humans? If you look at all the randomized controlled clinical trials (meaning human trials), pomegranates have no significant effect on body weight, BMI, belly fat, or even body fat percentage in those randomized to pomegranate product consumption. What about for the prevention and treatment of cardiovascular diseases? Researchers reviewed 25 clinical trials, looking at cholesterol, blood pressure, artery function, atherosclerotic plaque formation, and platelet function, and…even in the best studies, they did not find significant indications of benefit.

Here’s a study on pomegranate juice and erectile dysfunction. It was funded by the POM company, and yet it failed as well. No benefit for diabetes markers, and no benefit for chronic obstructive pulmonary diseases, like emphysema. They were banking on the antioxidant activity of pomegranate juice to help, but that’s antioxidant activity in vitro (meaning in a test tube or petri dish).

To my surprise, a meta-analysis of data from 11 randomized controlled trials did not support convincing evidence of pomegranate intake having a significant increasing effect on total antioxidant capacity of your bloodstream, because some of the most potent antioxidants don’t even seem to be absorbed into the human body. No wonder pomegranate supplementation didn’t seem to affect oxidative stress in tissue samples taken from prostate cancer patients. But, of course, what we care about is whether it affects the cancer Itself.

The strongest evidence for the anticancer activity of pomegranates is said to come from studies on prostate cancer. Unfortunately, early promising results were not conﬁrmed when they were actually put to the test. For example, daily pomegranate Intake was found in a randomized controlled trial to have no impact on PSA levels, a marker of tumor progression. And, indeed, a randomized, double-blind, placebo-controlled trial found essentially no difference when it came to prostate cancer disease progression.

They were banking on the anti-inflammatory activity of pomegranate juice to help, but again, that had been demonstrated in vitro. In people, a meta-analysis based on five randomized controlled trials published in 2016 concluded that pomegranate juice did not have a significant effect on C-reactive protein levels, a key marker of inflammation. If you look at the forest plot, though, you’ll see all five trials tended towards lower C-reactive protein levels such that the data combined almost reached statistical significance. And indeed, an updated meta-analysis published in 2020 based on seven studies did indeed get tipped over into significance, and found a significant drop in two other inflammatory markers as well.

Huh, okay. Well, maybe pomegranate juice could help in the control of inﬂammatory diseases after all. But you don’t know, until you put it to the test.

Osteoarthritis involves the degeneration of the cushioning cartilage within joints, particularly the knees. If you take some human osteoarthritic cartilage samples and you drip on a pomegranate extract, you can show cartilage-protective effects. Here’s how much cartilage disintegration was happening at baseline. Add some inflammation, and cartilage breakdown triples, but then add more and more of this pomegranate extract, and you can calm things down. But again, that’s in a petri dish. How do we know that when we eat pomegranates, the active components actually get into our bloodstream so they can find their way into our joints? Cartilage-protecting components were found to be bioavailable (at least in rabbits), raising the possibility that pomegranates could be a safe and nontoxic treatment with no side effects––as opposed to the drugs currently in use. But is it effective?

Clinical trials are in progress, and so many questions will be answered…right now! The first and only clinical trial to date on pomegranate juice and osteoarthritis. It’s not a placebo-controlled trial; instead, randomized people to pomegranate juice or nothing at all. Those drinking the juice did report less stiffness and impairment of physical function, but not significantly better than just doing nothing. Shoot.

What about this open-labeled study, where the patients knew what they were getting? Eight people with active rheumatoid arthritis took some pomegranate extract every day, and the six who stuck with it reported fewer tender joints. But as we learned from the osteoarthritis study, if you don’t have a control group, you have no sense of what role, if any, the treatment actually plays.

And so finally, we come to this: a randomized, double-blind, placebo-controlled trial. It’s about time! Half of the subjects unknowingly got some pomegranate extracts; the other half unknowingly got the equivalent of a sugar pill and…significant improvement in the number of swollen joints, tender joints, pain intensity, a disease activity score, a health assessment questionnaire, and morning stiffness, compared to placebo. So, if you have rheumatoid arthritis, I would indeed recommend you start eating pomegranates. Why not just pop pomegranate pills? After all, it was a pomegranate extract that alleviated disease activity. One good reason to stick to the fruit is that when 19 pomegranate supplements were actually tested in a laboratory, most didn’t actually appear to have any pomegranate in them at all! Only 6 out of 19 appeared to be authentic.