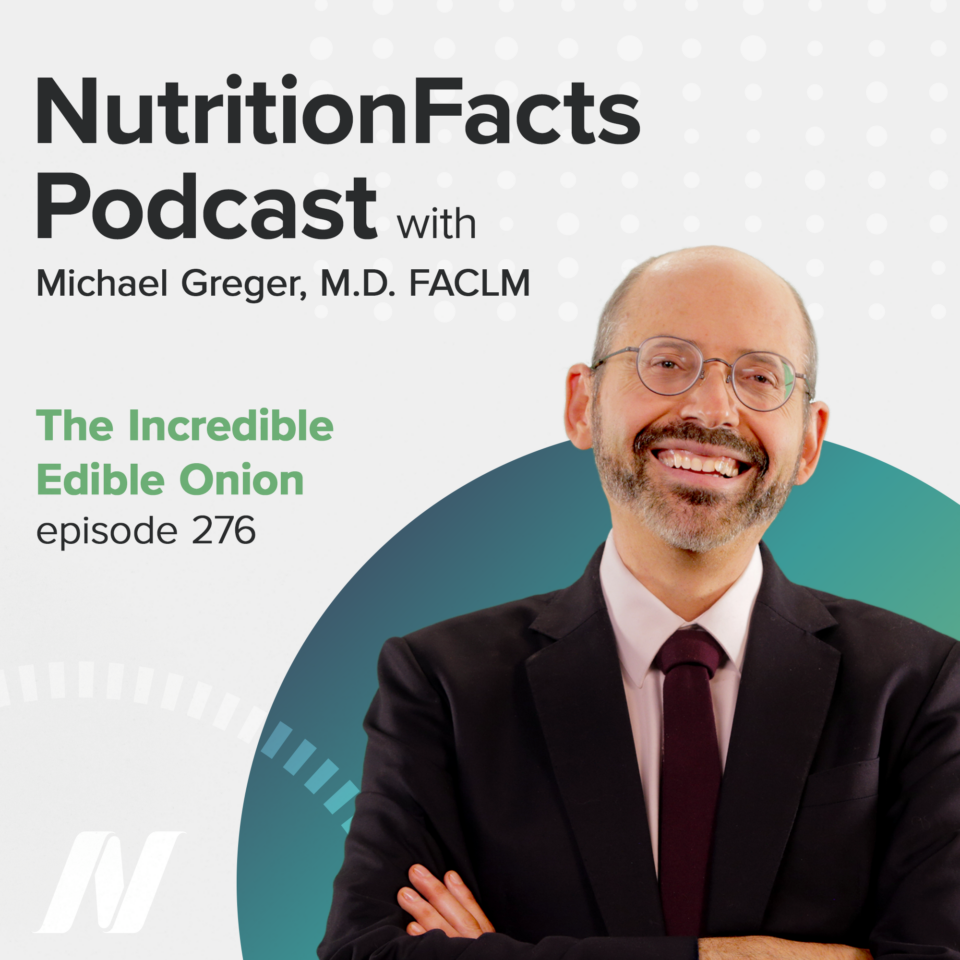 Today, on the NutritionFacts Podcast, we discover some of the health benefits of eating onions.

This episode features audio from Are Onions Beneficial for Testosterone, Osteoporosis, Allergies, and Cancer? and Onions Put to the Test for Weight Loss, Cholesterol, and PCOS Treatment. Visit the video pages for all sources and doctor’s notes related to this podcast.

Today, we discover some of the health benefits of eating onions.

Onions are potentially a good source of antioxidants, though, interestingly, the antioxidants are concentrated in the outer layers immediately under the papery peel. Unfortunately, most consumers discard these most nutrient-rich outermost layers, thus losing a valuable part. Here are some numbers. More than 10 times more antioxidants in the outer layer of white onions, compared to the core. You’ll also note that yellow onions in general have more antioxidants than white. And red onions beat them both, based on three different antioxidant testing methods. That’s why I always try to buy red. The red onions are indeed slightly better; yellow or white onions are no slouches, containing considerable levels of antioxidant activity. So, nutritious, sure, but are there any particular clinical benefits to onion consumption?

Evidently, older white women who consumed onions at least once a day had an overall bone density that was 5 percent greater than individuals who consumed onions no more than once a month (P < 0.03). Now, 5 percent might not sound like a lot, but that improvement in bone density could potentially translate into decreasing their risk of hip fracture by more than 20 percent if, indeed, it was cause and effect.

Daily administration of onion did cause a big bump in bone density. This opens the possibility for a low-cost, safe, and effective nutritional approach to osteoporosis and—you guessed it—in the rat. Another rodent study. Rats!

But finally, here we go. Tremendous strides have been made in treating osteoporosis with drugs, but they have the potential for serious adverse side effects; so, scientists have drawn their attention to natural remedies. So, let’s randomize people to drink onion juice or placebo onion juice. I don’t know what sounds worse: sugary onion juice or fake sugary onion juice. And as if drinking onion juice wasn’t bad enough, it was all for nothing. It didn’t even work.

What about the anti-allergy activities of shallots, and any therapeutic effects on helping allergic runny noses? Sixteen such patients were randomized equally into an antihistamine group, or a group that got antihistamines plus some capsules containing dried shallot powder. And it looked like the shallot group did better, but there was actually no statistically significant difference in total symptoms between the two groups; so, another #OnionFail. There has to be something onions can do.

What about testing the effects of fresh yellow onion consumption on breast cancer patients to try to decrease the toxic effects of a chemotherapy drug called doxorubicin? Unfortunately, no significant benefit was found on decreasing damage to the liver or heart.

But here we go…finally, a clinical benefit to onions. The consumption of fresh yellow onion ameliorates the high blood sugars and insulin resistance in breast cancer patients during doxorubicin-based chemotherapy. Doxorubicin isn’t just toxic to the liver and heart; it may also contribute to insulin resistance. So, let’s do a randomized, triple-blind, controlled clinical trial randomizing patients to like a whole onion a day or a third of an onion a day. What happened? The high-onion group experienced a significant decrease in blood sugars and insulin resistance compared to the low-onion group. They went up in the low-onion group, but down in the high-onion group. So, make onions your friend. What’s the worst that can happen—a little onion breath and BO? Probably the least of your worries if you have cancer on chemotherapy.

In our next story we learn what just an eighth of a teaspoon a day of onion powder do for body fat, and what raw red onion can do for cholesterol.

Enter the effect of steamed onion consumption on body fat in overweight subjects. The researchers used steamed onions so they could better disguise it against placebo, and dried it into onion powder and gave people just a miniscule amount—about an eighth of a teaspoon a day. Surely, a little daily dusting of onion powder isn’t going to affect the course of people’s weight, but check out these results, reported in the abstract: a significant reduction in body fat mass on both DEXA scan and measured by CT scan, a significant decrease in the areas of whole fat, visceral fat, and subcutaneous fat.

Hold on. If a little onion powder is so effective for weight loss, why wasn’t it featured in my book How Not to Diet? Because as so often happens in studies, the spin in the abstract doesn’t accurately represent the actual data. Here are the DEXA scan results. No significant change of fat in the group that got the placebo capsules. They only appeared to lose about a spoonful of fat, whereas the group unknowingly taking an eighth of a teaspoon of onion powder stuffed into capsules lost nearly one and a half pounds of body fat, a significant drop from baseline, but not a statistically significant drop compared to the placebo group, meaning the loss could very well have been due to chance. Same thing with the CT scan results: five times more loss of overall fat, and 30 times more loss of the dangerous visceral fat, but did not reach statistical significance compared to placebo.

A more recent study tried four teaspoons of onion powder a day, and similarly failed to accelerate the loss of body fat compared to placebo––but the placebo was also four teaspoons of onion powder a day. They used yellow onions versus white onions, and it seems they both may have caused a loss of body fat, without a significant difference between them. Either way, you can look at these two studies and say, yeah, but what are the downsides? I mean just an eighth teaspoon of onion powder a day. Why not give it a try? Can’t hurt, but we just don’t have confidence that it’s going to actually help.

Turning now to polycystic ovary syndrome, also known as P.C.O.S., or PCOS. It’s one of the most common hormone disorders, affecting 5 to 10 percent of reproductive-aged women. In addition to symptoms like irregular periods, PCOS is also a pre-diabetic state, with decreased insulin sensitivity. PCOS treatment is a big challenge due to medication side effects. So, what about using dietary options? How about a randomized controlled clinical trial of raw red onion intake?

Why onions? Well, onion extracts evidently help in diabetic rats and, more importantly, in diabetic humans, but evidently not in non-diabetic humans. PCOS sufferers are kind of pre-diabetic; so, would it work for them? First, let’s look at those other two studies. Here’s the diabetic one, on the metabolic effects of onion and green beans. Diabetics spent a week eating either a small onion a day, or the same diet but with about five cups of green beans instead, and they both worked. The onion dropped people’s blood sugars by about 10 percent, and the green beans more like 15 percent.

Here’s the study that supposedly shows no blood sugar benefits for nondiabetics. It’s true onions don’t lower normal blood sugars, which is a good thing, but check out what happens when you feed people sugar. Have people down about two tablespoons of corn syrup, and their blood sugars shoot up over the next two hours before their body is able to tamp it back down. But give people the exact same amount of sugar, but with more and more onion, and the blood sugar spike is significantly dampened––almost as much as if you had instead given them an antidiabetic drug. And we see the same when you give people a shot of adrenaline, with…or without…onions. So, are there blood sugar benefits for both diabetics and nondiabetics alike? No difference was found between the higher and lower onion groups of PCOS patients. Nor were there any differences in a marker of inflammation between the two groups. But women with PCOS aren’t just at higher risk for diabetes and inflammation, but also high cholesterol.

Women with PCOS are seven times more likely to have a heart attack, the number one killer of women. But raw red onion consumption appears to be effective as a cholesterol-lowering food, though the high-onion group only dropped their LDL cholesterol about five points––not significantly different than the low onion group.

I did find this study from nearly 50 years ago where researchers fed people nearly an entire stick of butter, and their cholesterol shot up about 30 points within hours of consumption, but only nine points or three points when combined with about a third cup of raw or boiled onion––the moral of the story being…don’t eat a stick of butter.