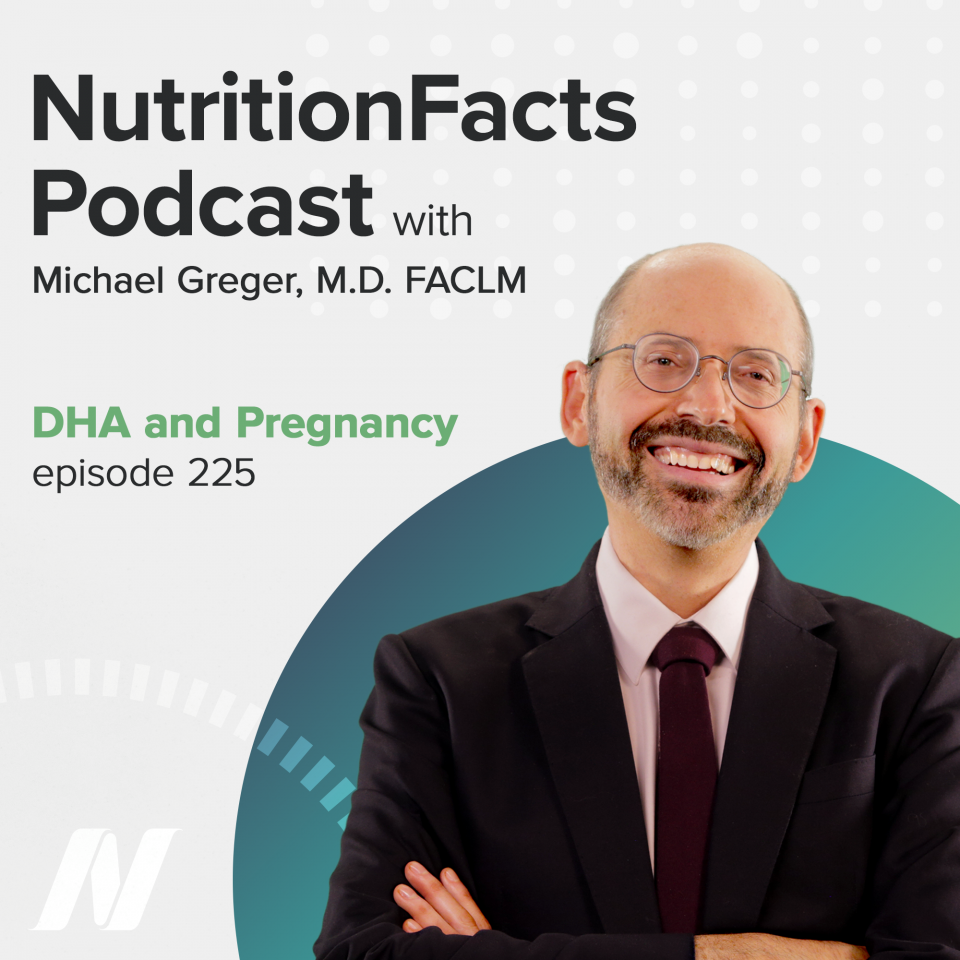 Today on the Nutrition Facts podcast, we look at the long-chain omega 3 fatty acid that plays an important role in supporting pregnant and breastfeeding women.

This episode features audio from Should Pregnant & Breastfeeding Women Take DHA? and Should Vegan Women Supplement with DHA during Pregnancy?. Visit the video pages for all sources and doctor’s notes related to this podcast.

Today, we look at the long chain omega 3 fatty acid – DHA, that plays an important role in supporting pregnant and breast-feeding women. In our first story, we discover how DHA improves the development of infants.

One of the reasons breastfed infants may have better cognitive and visual development is because human milk contains long chain polyunsaturated fatty acids like the omega 3 DHA, while most available infant formulas did not, based on data like this, where infants given control formula without DHA didn’t do as well as those given DHA-fortified formula. Neither did as well as the breastfed infants, who serve as the gold standard, but this was enough to convince formula manufacturers to start adding DHA to their infant formula starting back in 2002.

The question then became how much to add? Easy, right? Just add however much is naturally found in breast milk. However, the DHA level in breast milk is extremely variable, depending on what the mom is eating. For example, there’s all these healthy populations that don’t eat any seafood, and have much lower levels in their milk, and they seem fine; so, that makes it difficult to determine the optimal amount to add to formula, or for that matter, what to recommend for pregnant and breastfeeding women. Consensus guidelines recommend that women should aim to consume an average of 200 mg per day of DHA during pregnancy. Of course, this isn’t as simple as encouraging women to eat more fish because of the toxic pollutants, such as mercury, such that for most fish, such as tuna, the brain damage caused by the mercury would exceed the benefit from the DHA.

And some pollutants, like PCBs, can get stuck in our bodies for decades; and so, it’s not enough to just eat clean during pregnancy.

What about purified fish oil? The methods supplement manufacturers use, like distillation, leave considerable amounts of. PCBs and other pollutants in the products, so much so that when taken as directed,.the concentration of dioxin-like pollutants in fish oil is so high that salmon, herring, and tuna oils would exceed the tolerable limit of toxicity.

Thankfully, one can get the benefits without the risks by getting DHA from algae instead, which is where the fish get it from. And so, pregnant and breastfeeding moms can cut out the middle-fish and get DHA directly from the source, at the bottom of the food chain, where we don’t have to worry about toxic pollutants.

But until recently, we thought everyone should take these long chain omega 3’s for their heart. But the balance of evidence is now such that doctors should no longer be recommending fish oil intake or fish consumption solely for the prevention of coronary heart disease. But what about for expectant and breastfeeding mothers? What’s the latest science show? Put all the studies together and turns out adding DHA to formula does not appear to help infant cognition after all, similar to other recent compilations of evidence that show no significant benefit. In fact, at least 4 meta-analyses, or systematic reviews, have reached a similar conclusion. Now, these were mostly based on the standard series of measurements known as the Bayley Scales for Infant Development. Maybe if other tests were used, there would be a different result, but so far, no luck. Giving women DHA supplements during pregnancy did not appear to help with other outcomes like attention span or working memory either.

Although there may be no significant benefit to infant cognition, what about other things like vision? Six trials have been done to date supplementing pregnant women. Four showed no effect, and the two that showed benefit had some problems; and so, we really don’t know at this point, but hey, if all the studies so far show either nothing or benefit, why not just take them to err on the side of caution?

Yeah, no demonstrable clear and consistent benefits, but there are new studies on this coming out all the time; if it’s harmless, maybe women should just take it to be on the safe side. The problem is that it may not be harmless in large doses. In a study in which women were given a whopping 800mg of DHA a day during pregnancy, infant girls exposed to the higher-dose DHA in the womb had lower language scores and were more likely to have delayed language development than girls from women in the control group.

So, the absence of clear positive effects along with the possible presence of negative effects in the children raised the question whether DHA supplementation is justifiable. But it was a really large dose, suggesting that there may be an optimal DHA level below and above which DHA might be detrimental to the developing brain. So, maybe too much is detrimental; what about too little? I’ll cover that, next.

In our final story, today – we look at the consensus guidelines about DHA – for pregnant and breastfeeding women.

A systematic review of randomized controlled trials of DHA supplementation of pregnant and breast-feeding women failed to find any clear and consistent short or long-term benefit for psychomotor, mental, visual, or physical development.

Maybe DHA supplementation during pregnancy had no effect because the body isn’t stupid and protects the growth of the baby’s brain by drawing off of maternal stores of DHA, upregulating maternal DHA synthesis, and preferentially shuttling it to the fetus, but what if moms don’t start out with large maternal stores?

In other words, maybe DHA failed to help women who were already getting enough, but maybe women with very low intakes would benefit from DHA supplementation. Well first, it’s interesting to note that even by 1978 researchers were suggesting plant-based diets as the diet of choice in the treatment of our number one killer, but babies breastfed by vegan moms had significantly less DHA in their bloodstreams, presumably because they had significantly less DHA in their breastmilk.

The question is whether these differences are of any consequence? The growth and development of vegan and vegetarian children are normal, as long as they’re getting their B12; no evidence that neural or intellectual functions are impaired. In fact, the two studies we have on vegetarian kids showed they had higher IQ’s, though that may be because their parents tended to be better educated. But even though the kids seemed fine, that doesn’t rule out the possibility that there may be some subtle differences in visual or neural functioning.

It would be interesting to compare the function of babies getting vegan breast milk levels versus general population levels. You can see vegans had 14, vegetarians 30, and omnivores 37. This study compared zero to 32, 64, and 96, and 32 worked better than zero, but more than 32 didn’t add anything. This could explain why the general population at 37 doesn’t benefit from additional DHA supplementation, but what about down at 14? Most studies down at that level show no advantage over zero, though one study found a benefit supplementing at as low as 5, but that doesn’t help us.

Now, just because babies breastfed by vegan moms have significantly lower DHA levels in the blood, doesn’t necessarily mean they have lower levels in their brain, which is where it counts. What we need is a randomized, controlled trial in non-fish-eaters of DHA supplementation. Until then, it’s going to remain uncertain. So, what should pregnant and breastfeeding women who avoid fish do in the meanwhile? Low intake of DHA doesn’t necessarily equate with fetal DHA inadequacy, but these new data suggest that some infants may not be getting enough and could benefit from their moms supplementing; and so, I recommend pregnant and breast-feeding women on plant-based diets do follow the consensus guidelines to get about 200mg of preformed DHA from an uncontaminated source, like algae oil, which is probably the best combination for all women given the state of our world, to minimize exposure to toxic pollutants, such as dioxins, PCBs, and mercury.

The Sour Power of Vinegar