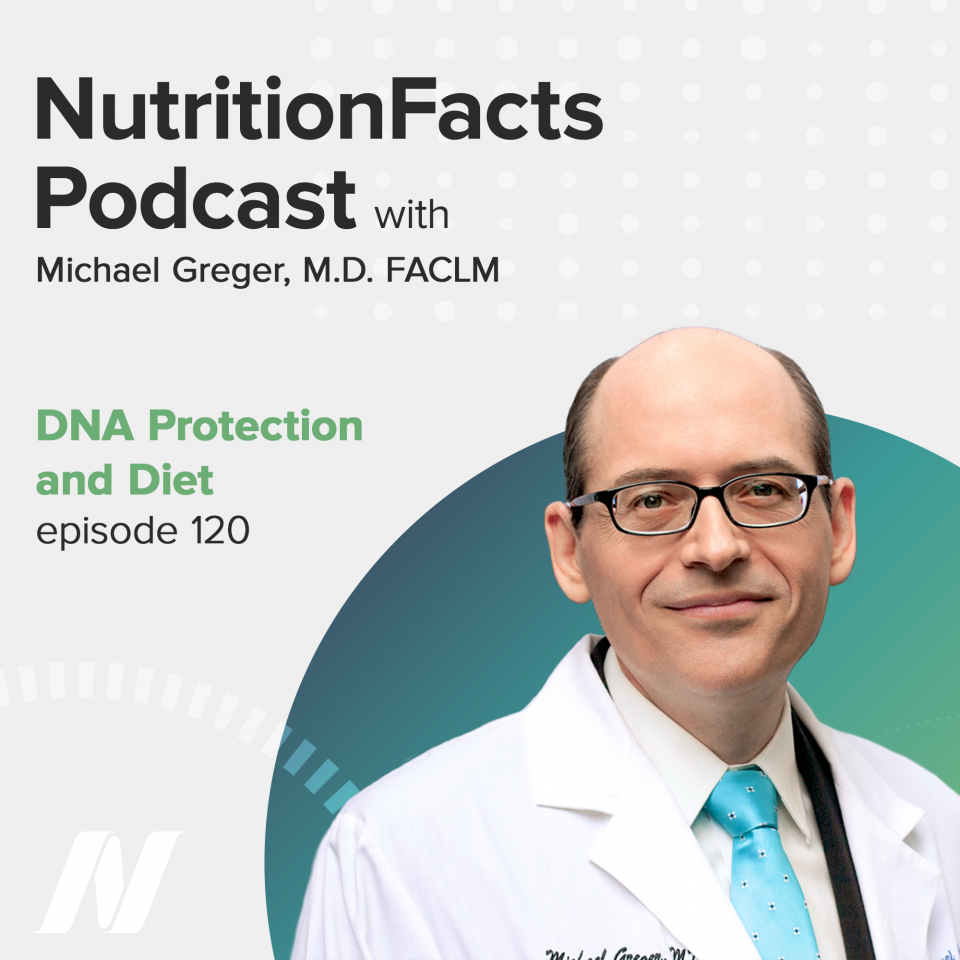 There are ways to limit the DNA damage that occurs in our bodies everyday. Here’s how.

This episode features audio from Which Fruits & Vegetables Boost DNA Repair?, Spicing Up DNA Protection, and Kiwifruit & DNA Repair. Visit the video pages for all sources and doctor’s notes related to this podcast.

Here’s a question for you. What’s the best way to live a longer, healthier life? Diet? Exercise? Both—eating healthy while doing jumping jacks? Welcome to the Nutrition Facts Podcast. I’m your host Dr. Michael Greger and I’m here to help you answer that question. We have tremendous power over our health destiny and longevity. The vast majority of premature death and disability is preventable with a healthy enough diet and lifestyle. And, I’m here to bring you the latest peer-reviewed research to give you the tools to put it into practice.

Here’s a fun fact. Did you know that every hour, there are 800 incidents of DNA damage in our bodies. OK, not so fun fact, but today we find out which foods may help us patch it back up: apples, broccoli, celery, choy sum, lemons, lettuce, oranges, persimmons, or strawberries?

In the light of strikingly consistent observations from many population-based studies, there can be little doubt that the habitual consumption of diets high in fruits and vegetables helps to reduce the risk of development of degenerative diseases, including many types of cancers. Not satisfied with just telling people to eat their fruits and veggies, scientists want to know the mechanism.

Fruits and vegetables are not just vehicles for antioxidants; they contain innumerable phytonutrients that can boost our detoxification enzymes, modulate gene expression, and even DNA repair.

Until fairly recently, it was generally assumed that functions as important as DNA repair were unlikely to be readily affected by nutrition. But if you compare identical twins to fraternal twins, only about a half to three quarters of DNA repair function is genetically determined; the rest we may be able to control.

It is estimated that, on average, there are 800 incidents of DNA damage in our bodies per hour. That’s 19,000 hits to our DNA every day. And that DNA damage can cause mutations that can give rise to cancer—if not repaired.

Thankfully, the regulation of DNA repair may be added to the list of biological processes that are influenced by what we eat—and, specifically, that this might constitute part of the explanation for the cancer-preventive effects of many plant-based foods.

Any plants in particular? Well, nine fruits and vegetables were tested to see which was better able to boost DNA repair: lemons, persimmons, strawberries, oranges, choy sum (which is like skinny bok choy), broccoli, celery, lettuce, and apples. Which ones made the cut? Want to guess? Lemons, persimmons, strawberries, broccoli, celery and apples each conferred DNA protection at very low doses.

Here’s what lemons could do, for example. Cut DNA damage by about a third. Was it the vitamin C? No, removing the vitamin C from the lemon extract did not remove the protective effect. However, if you boiled the lemon first for 30 minutes, the effect was lost.

In our next story we look at a study examining the DNA of those cooking with spices such as ginger, rosemary, and turmeric.

This landmark study, comparing the ability of different spices to suppress inflammation, also compared their ability to protect DNA. Cloves, ginger, rosemary, and turmeric were able to significantly stifle the inflammatory response. But, what about DNA protection?

If you take a tissue sample from some random person, about 7% of their cells may show evidence of DNA damage—actual breaks in the strands of their DNA. And, if you blast those cells with free radicals, you can bring that number up to 10%. But, if the person had been eating ginger for a week, that drops to just 8%. This is from a tissue sample taken from someone who hadn’t been eating any herbs and spices. And, as a result, their cells were vulnerable to DNA damage from oxidative stress. But, just including ginger in our diet may cut that damage 25%—and, same with rosemary.

But, check out turmeric. DNA damage cut in half. Again, this is not just mixing turmeric with cells in some petri dish. This is comparing what happens when you expose the cells of spice-eaters versus the cells of non-spice-eaters to free radicals, and just sit back and count DNA fracture rates.

And, not only did the turmeric work significantly better, but at a significantly smaller dose. This is comparing about one-and-a-third teaspoons a day of ginger or rosemary to practically just a pinch of turmeric—about an eighth of a teaspoon a day. That’s how powerful the stuff is. So, I encourage everyone to cook with this wonderful spice. Tastes great, and may protect our cells in our body— with or without the added stress. If you just count DNA breaks in people’s cells before and after a week of spices, without the free radical blast, we see no significant intrinsic protection in the ginger or rosemary groups. But, the turmeric group still appeared to reduce DNA damage by half.

This may be because curcumin is not just itself an antioxidant, but boosts the activity of our own antioxidant enzymes. Catalase is one of the most active enzymes of the body. Each one can detoxify millions of free radicals—per second. And, if you consume the equivalent of about three-quarters of a teaspoon of turmeric a day, the activity of this enzyme in our bloodstream gets boosted 75%!

Now, why do I suggest cooking with it, rather than just like throwing it in a smoothie? Well, this effect was found specifically for heat-treated turmeric. Because, in practice, “many herbs and spices are only consumed after cooking,” they tested both turmeric and oregano in both raw and cooked forms, and in terms of DNA damage, the results from raw turmeric did not reach statistical significance—though the opposite was found for the anti-inflammatory effects. So, maybe we should eat it both ways.

Practical recommendations for obtaining curcumin in the diet might be to add turmeric to sweet dishes containing cinnamon and ginger. I add it to my pumpkin pie smoothies, which are otherwise just a can of pumpkin, frozen cranberries, pitted dates, pumpkin pie spice, and some non-dairy milk. And also, cook with curry powder, or turmeric itself. They also suggest something called “turmeric milk,” which is evidently “a traditional Indian elixir made with milk, turmeric powder, and sugar.”

I’d suggest substituting a healthier sweetener and a healthier milk. Soy milk, for example, might have a double benefit. If you’re taking the turmeric to combat inflammation, compared to dairy protein, osteoarthritis sufferers randomized to soy protein ended up with significantly improved joint range of motion.

In our last story –we look at how plant-based diets help prevent cancer not only by blocking DNA damage with antioxidants, but by increasing our DNA repair enzymes’ ability to fix any damage.

In 2003, a landmark study was published in the journal Carcinogenesis. Now, we’ve known “Plant-based diets rich in fruits and vegetables can prevent the development of several chronic age-related diseases, including cancer.” But why? Well, the mechanism behind this protective effect is not clear. We know whole plant foods are rich in antioxidants, which are capable of decreasing oxidative damage to DNA, and thus might prevent mutation and cancer.

But what about our second line of defense against oxidative DNA damage—DNA repair? We’re going to get some DNA damage in our world, no matter how healthy our diets. So it’s critical to find ways to upregulate our DNA repair enzymes, to better assist with stitching our DNA back together again.

So, how about we give people some kiwifruits on and off for a few weeks, and see what happens? Why kiwifruits? Because it was funded by the International Kiwifruit Association. You got to get funding from somewhere.

First, what happened to the level of DNA damage? Right, maybe some were smokers or sat in traffic, who knows? So day zero, no kiwi fruit. But, then one kiwi a day, then they go back to zero, then two a day, then zero, then three kiwis a day. Now, it wasn’t completely consistent on every day for every person, but you can kind of get a sense that the times without the kiwifruits, DNA damage tended to go up. And indeed, that’s what the statistical analysis found: significantly less DNA damage on the days they were eating kiwifruits.

Kiwifruits have antioxidants, so no wonder there was less DNA damage. But once you already have DNA damage, can kiwifruit help with DNA restoration? So, this is our first line of defense, right, the antioxidants in plant foods.

Now on to our second defense line of defense, DNA repair. Now, although it appears the three kiwis did better than one or two, statistically all three kiwi doses appeared pretty much the same, suggesting there’s some sort of plateau effect. Maybe there’s just some phytonutrient in kiwis that boosts this DNA repair enzyme system, and it’s just really a matter of whether or not you have it in our bloodstream or not, rather than how much of it is there.

NutritionFacts.org is a nonprofit, science-based public service, where you can sign up for free daily updates on the latest in nutrition research via bite-sized videos and articles. Everything on the website is free. There’s no ads, no corporate sponsorship. It’s strictly non-commercial. I’m not selling anything. I just put it up as a public service, as a labor of love, as a tribute to my grandmother –whose own life was saved with evidence-based nutrition. Thanks for listening to Nutrition Facts. I’m your host, Dr. Michael Greger.