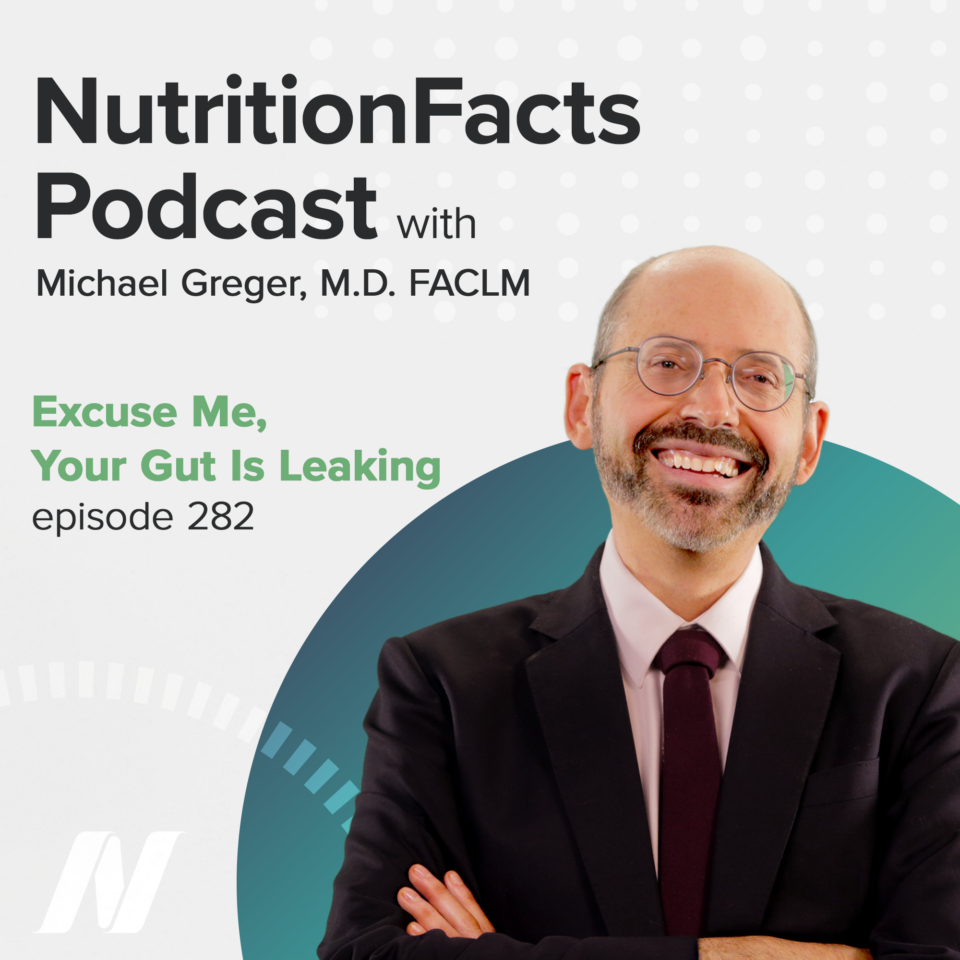 Many foods, drugs and beverages can disrupt the integrity of our intestinal barrier.

This episode features audio from Avoid These Foods to Prevent a Leaky Gut and How to Heal a Leaky Gut with Diet. Visit the video pages for all sources and doctor’s notes related to this podcast.

Today, we look at some of the latest research on leaky gut syndrome. Did you know that common drugs, foods, and beverages can disrupt the integrity of our intestinal barrier? Here’s the story.

Intestinal permeability, the leakiness of our gut, may be a new target for disease prevention and therapy. With all the little folds, our intestinal barrier covers a surface of more than 4,000 square feet—that’s bigger than a tennis court, and requires approximately 40 percent of our body’s total energy expenditure to maintain.

Mounting evidence implicates the disruption of intestinal barrier integrity in the development of numerous ailments such as inﬂammatory bowel disease. Researchers measured intestinal permeability using blue food coloring. It stays in your gut if you’re healthy, but can be detected in the blood of extremely sick individuals as their gut barrier breaks down. You don’t have to end up in the ICU to develop a leaky gut, though. Simply taking some aspirin or ibuprofen can do the trick.

Indeed, taking two regular aspirin, or two extra-strength aspirin just once, can increase the leakiness of your gut. These results suggest even healthy individuals should be cautious with aspirin use, as it may result in gastrointestinal barrier dysfunction.

What about buffered aspirin? It doesn’t make any difference: both regular aspirin and Bufferin produced multiple erosions in the inner lining of the stomach and intestine. Put a scope down people’s throats, and you can see extensive erosions and redness inside 90 percent of people taking aspirin or Bufferin in their recommended doses. How many hours does it take for the damage to occur? None. It happens within five minutes. Acetaminophen, sold as Tylenol in the U.S., would be a better choice, unless you have problems with your liver. And, rather than making things better, vitamin C supplements appeared to make the aspirin-induced increase in gut leakiness even worse.

Interestingly, this may be why NSAID drugs like aspirin, ibuprofen, and naproxen, are involved in up to 25 percent of food-induced anaphylaxis––in other words, increasing the odds of life-threatening food allergy attacks by more than 10-fold, presumably because these drugs increase the leakiness of the intestinal barrier, causing tiny food particles to slip into the bloodstream. Okay, but why can exercise increase risk, too?

Strenuous exercise, like an hour at 70 percent of maximum capacity, can divert so much blood to the muscles away from your internal organs that it can cause transient injury to your intestines, causing mild gut leakiness. But this can be aggravated if athletes take ibuprofen or any of the other NSAID drugs, which is unfortunately all too common.

Alcohol can also be a risk factor for food allergy attacks for the same reason, increasing gut leakiness. But cut out the alcohol and your gut can heal up.

What other dietary components can make a difference? Elevated consumption of saturated fat, which is found in meat, dairy, and junk, can cause the growth of bad bacteria which make the rotten egg gas hydrogen sulfide, which can degrade the protective mucus layer. It is said to be clear that high-fat diets in general negatively impact intestinal health by disrupting the intestinal barrier system through a variety of mechanisms, but most of the vast array of studies cited on the negative effects of a high-fat diet on gut leakiness were done on lab animals or in a petri dish. You don’t know for sure, until you put it to the test.

Rates of obesity and other cardiometabolic disorders have increased rapidly in parallel with a transition from traditional lower-fat diets to higher-fat diets. We know a disturbance in our good gut flora has been shown to be associated with a high risk of many of these same diseases, and studies using rodents suggest that a high-fat diet unbalances the microbiome and impairs the gut barrier, resulting in disease. To connect all the dots, though, we need a human interventional trial, and here we go. A six-month randomized controlled-feeding trial on the effects of dietary fat on gut microbiota. And indeed, higher fat consumption appeared to be associated with unfavorable changes in gut microbiome and proinflammatory factors in the blood, and note this wasn’t meat and dairy. The researchers were just swapped in refined carbs for refined fats, white rice and white flour for oil. These findings suggest countries westernizing their diets should advise against increasing intakes of dietary fat, while countries that have already adopted Westernized diets should consider cutting down.

So far, we’ve discussed things to prevent a leaky gut. What about foods to heal a leaky gut? That’s what we’ll cover, next.

Our intestinal tract is the largest barrier between us and the environment. More than what we touch or breathe, what we eat is our largest exposure to the outside world. Normally, our entire gastro-intestinal tract is impervious to what is inside of it, allowing our body to pick and choose what comes in or out. But there are things that may make our gut leaky, and chief among them is our diet.

What happens is the Standard American Diet can cause gut dysbiosis, meaning a disruption in our gut microbiome, which can lead to intestinal inﬂammation and a leaky intestinal barrier. Then, tiny bits of undigested food, microbes, and toxins can slip uninvited through our gut lining into our bloodstream, and trigger chronic systemic inflammation.

To avoid this dysbiosis and intestinal inﬂammation, plants should be preferred. Vegetarian diets’ gut bacteria are associated with intestinal microbiome balance, high bacterial biodiversity, and integrity of the intestinal barrier. They tend to suffer from markedly less uremic toxins, like indole and p-cresol, and because fiber is the primary food for our gut microbiome, the gut bacteria of those eating plant-based diets produce more of the good stuff: short-chain fatty acids that fulﬁll a protective and nourishing role for the cells lining our gut, ensuring the preservation of the intestinal barrier. Plant ﬁber is of prime importance to the preservation of intestinal barrier integrity, but you can’t know for sure, until you put it to the test.

People were given whole grains, beans and lentils, fruits, vegetables, and nuts and seeds, and got a significant reduction in zonulin levels.

Zonulin is a protein responsible for the disassembling of the tight junctions between gut lining cells, and so it’s a biomarker that reflects an impairment of the intestinal barrier. In other words, zonulin is considered to be a useful marker of a leaky gut. But since adding all those plants seemed to lower levels, that may imply that appropriate ﬁber intake helps to maintain the proper structure and function of the intestinal barrier. But whole healthy plant foods have a lot more than fiber. How do we know it’s the fiber? And the study didn’t even have a control group. That’s why they say gut permeability might be improved by dietary fiber. To prove cause and effect, it’d be nice to have a randomized double-blind crossover study where you compare the effect of the same food with or without fiber––and here we go.

People were randomized to pasta with or without added fiber, and there was a significant drop in zonulin levels in the added-fiber group. So, fiber does appear to improve gut leakiness.

Any plant foods in particular that may help? Curcumin, the yellow pigment in the spice turmeric, can help prevent the intestinal damage done by ibuprofen-type drugs, but that’s in rats. Similar protection was noted for the broccoli compound sulforaphane, but that was in mice. No human studies on broccoli yet, but there was a study on three days of the equivalent of about two to three teaspoons a day of turmeric, which did reduce the gastrointestinal barrier damage caused by exercise. Less may work, too, but no smaller doses have been put to the test.

If you ask alternative medicine practitioners what treatments they use for a leaky gut, #1 on the list, after reducing alcohol consumption, is zinc.

Zinc doesn’t just protect against aspirin-like drug-induced damage in rats; when put to the test in a randomized trial of humans, the same thing was found. The NSAID drug indomethacin caused a three-fold rise in gut permeability, as one would expect from that class of drugs, but when they were also taking zinc, this prevented the rise in permeability, strongly suggesting a small intestinal protective effect. The dose they used was massive, though: 75mg a day is nearly twice the tolerable upper daily limit for zinc. What about getting zinc just at regular food doses?

A significant improvement in gut leakiness even with a dose of just three milligrams of zinc, suggesting that even relatively low zinc supplementation may work. You can get three extra mg of zinc in your daily diet eating a cup of cooked lentils.