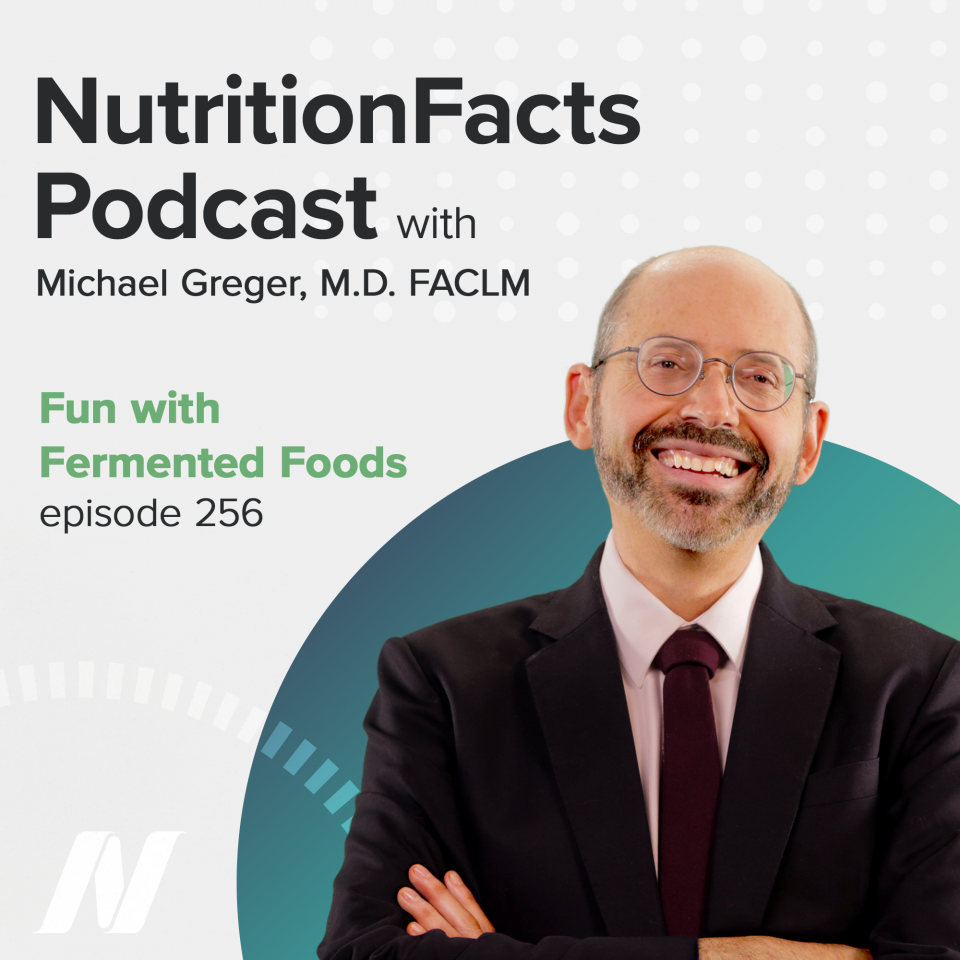 These foods are rich in probiotics but some are better for you than others.

This episode features audio from Fermented or Unfermented Soy Foods for Prostate Cancer Prevention?, Culture Shock – Questioning the Efficacy and Safety of Probiotics, and Preventing the Common Cold with Probiotics?. Visit the video pages for all sources and doctor’s notes related to this podcast.

Fermented foods have been getting a lot of attention recently. But some of these options work better than others. In our first story, we look at which foods appear more protective: fermented or unfermented soy food.

This is consistent with what we know in general about foods and the prevention and management of prostate cancer. Tomatoes, broccoli-family vegetables, and soy foods decrease risk. No clear benefit from fish, and an increased risk from meat and dairy. This may be because “[a]…diet, based [around] whole plant foods…effectively reduce[s] inflammation in the body.”

There is a genetic factor. If you have a first-degree relative with prostate cancer, you may be at three-fold higher risk. But non-genetic factors may increase your risk 300-fold. How do we know the low rates in Asia aren’t genetic? Because when they move to the United States, their rates shoot up. And, by the second generation, they’re almost caught up. This may be because of more Burger Kings and Dairy Queens, but could also be because of eating fewer protective foods, such as soy.

A systematic review of all soy and prostate cancer population studies to date confirmed soy foods “could lower the risk.” But, that’s kind of a broad category. There’s all sorts of soy foods. There’s fermented soy foods, like miso and tempeh, and unfermented foods, like tofu and soy milk. Which is more protective? Researchers sifted through the studies. And, it turns out that only the unfermented soy seemed to help. Tofu and soy milk consumption were associated with about a 30% reduction in risk, whereas there didn’t appear to be any protection linked to fermented soy foods.

In our next story, we discover how with certain medical conditions, probiotic supplements may actually make things worse.

When you make sauerkraut at home, you don’t have to add any kind of starter bacteria to get it to ferment, because the lactic acid-producing bacteria are already present on the cabbage leaves themselves, out in the field. This suggests raw fruits and vegetables may not only be a source of prebiotics—fiber—but also a source of novel probiotics.

Researchers have since worked on characterizing these bacterial communities and found two interesting things. First, that “the communities on each produce type were significantly distinct from one another.” So, the tree fruits harbored different bacteria than veggies on the ground, and grapes and mushrooms seemed to be off in their own little world. So, if indeed these bugs turn out to be good for us, that would underscore the importance of eating not just a greater quantity, but greater variety, of fruits and veggies every day. And second, they found that there were “significant differences in [microbial] community composition between conventional and organic…produce.” “This highlights the potential for differences in the [bacteria] between conventionally and organically farmed produce items to impact human health.” But, we don’t know in what direction. They certainly found different bacteria on organic versus conventional, but we don’t know enough about fruit and veggie bugs to make a determination as to which bacterial communities are healthier.

What about probiotic supplements? I’ve talked about the potential benefits, but there appears to be publication bias in the scientific literature about probiotics. This is something you see a lot with drug companies, where the sponsor, the supplement company paying for their own probiotic research, may not report negative results—not publish it, as if the study never happened. And so, then, we doctors just see the positive studies.

Using fancy statistical techniques, they estimated that as many as 20 unflattering studies were simply MIA. And, even in the studies that were published, even when the authors were directly sponsored by like some yogurt company, the conflicts of interest were very commonly “not reported.”

There’s also been concerns about safety. A review for the government’s Agency for Healthcare Research and Quality concluded that there’s “a lack of assessment and systematic reporting of adverse events in probiotic intervention studies.” So, while “[t]he available evidence in [randomized, controlled trials] does not indicate an increased risk [for the general public],…the current literature is not well equipped to answer questions on the safety of probiotic[s]…with confidence.”

This is the study that freaked people out a bit. Acute pancreatitis—sudden inflammation of the pancreas—is on the rise, which can become life threatening in some cases, as bacteria break through our gut barrier, and infect our internal organs. Antibiotics don’t seem to work, so how about probiotics? Seemed to work on rats. If you cause inflammation by cutting them open and mechanically damaging their pancreas, not only do probiotics show “strong evidence for efficacy,” but there were “no indications [of] harmful effects.” So, half the people with pancreatitis got probiotics, half got sugar pills, and, within ten days, the mortality rates shot up in the probiotics group, compared to placebo. More than twice as many people died on the probiotics. Thus, probiotics for acute pancreatitis? Probably not a good idea. But, further, probiotics “can no longer be considered to be just [completely] harmless.”

The researchers were criticized for not telling patients, not cautioning patients, about the risk before they signed up for the study. (The study subjects were told probiotics had “a long history of [safe] use” with no known side effects). In response to the criticisms, the researchers replied “‘There [were] no side effects,’ until [their] study.”

Finally today, we look at how probiotics may reduce the risk of upper respiratory tract infections.

Babies delivered via Caesarean section appear to be at increased risk for various allergic diseases. The thought is that “[v]aginal delivery leads to the first colonization of the gut with maternal vaginal bacteria, while c-section babies are deprived of this natural exposure, and exhibit a different gut flora.” This is supported by research noting that a disturbance in maternal vaginal flora during pregnancy may be associated with early asthma in their children. This all suggests our natural gut flora can affect the development of our immune system for better, or for worse.

In adulthood, two studies published back in 2001 suggested that probiotics could have “systemic immunity-enhancing effects.” Subjects were given a probiotic regimen between weeks three to six, and saw a significant boost in the ability of their white blood cells to chomp down on potential invaders. And, what’s interesting is that even after the probiotics were stopped, there was still enhanced immune function a few weeks later, compared to baseline. The same boost was found in the ability of their natural killer cells to kill cancer cells. And, similar results were also found using a different probiotic strain.

Now, improving immune cell function in a petri dish is nice, but does this actually translate into people having fewer infections? For that, we had to wait another ten years. But, now we have randomized, double-blind, placebo-controlled studies showing that those taking probiotics may have significantly fewer colds, fewer sick days, and fewer symptoms.

The latest review of the best studies to date found that probiotics, such as those in yogurt, soy yogurt, or supplements, may indeed reduce one’s risk of upper respiratory tract infection. But, the totality of evidence is still considered weak; so, it’s probably too early to make a blanket recommendation.

Unless one has suffered a major disruption of gut flora by antibiotics or an intestinal infection—unless one is symptomatic—with like diarrhea or bloating, I would suggest focusing on feeding the good bacteria we already have—by eating so-called prebiotics, such as fiber.

After all, as we saw before, who knows what you’re getting when you buy probiotics? They may not even be alive by the time you buy them. They also have to survive the journey down to the large intestine. Altogether, these points suggest that the advantages of prebiotics—found in plant foods—outweigh those of probiotics.

To see any graphs, charts, graphics, images or studies mentioned here, please go to the NutritionFacts.org podcast landing page. There you’ll find all the detailed information you need – plus links to all of the sources we cite for each of these topics.

For a vital, timely text on the pathogens that cause pandemics – you can order the E-book, audio book, or the hard copy of my latest book “How to Survive a Pandemic.” For recipes, check out my newer book, the “How Not to Diet Cookbook.” It’s beautifully designed, with more than 100 recipes for delicious and nutritious meals. And all proceeds I receive from the sales of my books go to charity.