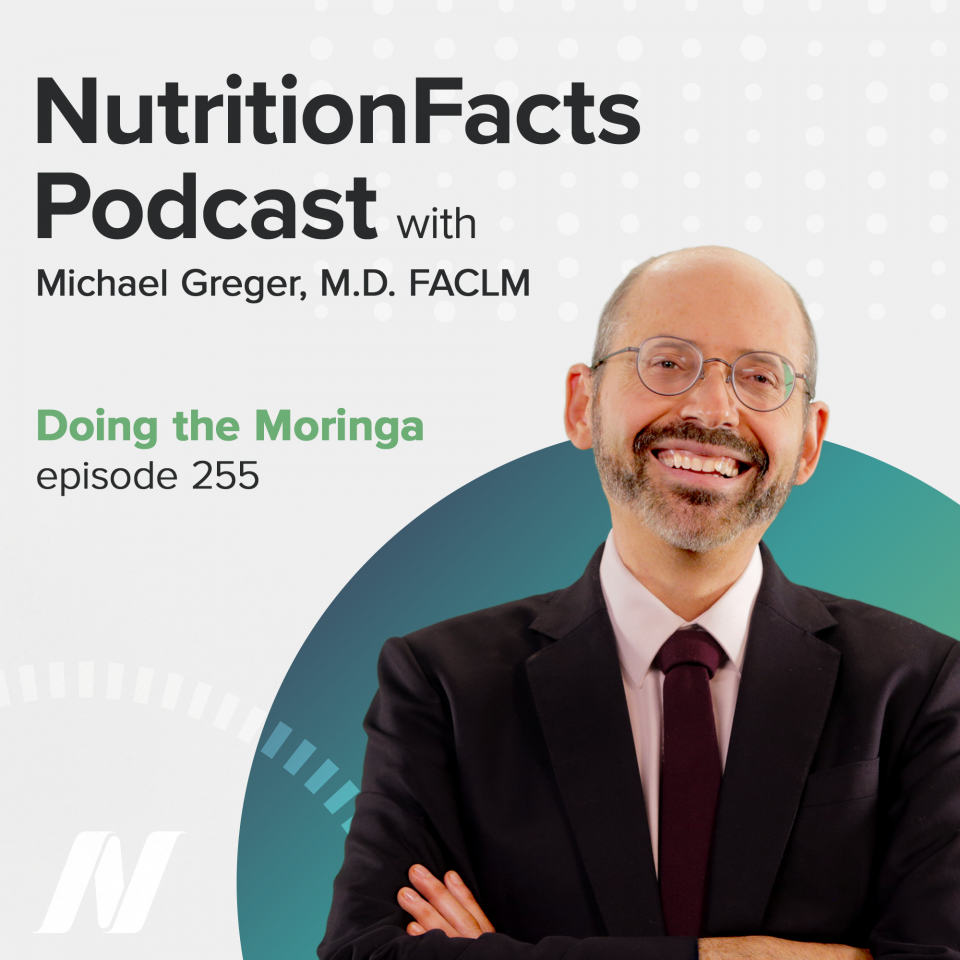 Don’t try this at home. Today we look at the true health benefits of Moringa powder. This episode features audio from The Benefits of Moringa: Is It the Most Nutritious Food? and The Efficacy and Side Effects of Moringa Leaf Powder. Visit the video pages for all sources and doctor’s notes related to this podcast.

It’s crazy when you think about all of the different kinds of foods we eat.  We just swallow – and hope it all works out for the best. Well – it turns out there are better ways to think about keeping our bodies humming healthfully along. Welcome to Nutrition Facts – I’m your host Dr. Michael Greger.

Today – we explore the health benefits of Moringa. And no, it’s not an exotic dance. In the West, it’s mainly available as a powder made from the Moringa plant. Here’s our first story.

Intro: Moringa has been called “the miracle tree,” but does it live up to all of the hype? Is it really more nutritious than other, more readily available fruits and vegetables? I’ll answer those questions in this video, and in the next video, I will look at its effects specifically on blood sugar. Check out the research.

Moringa (Moringa oleifera) is a plant commonly known as the “miracle tree” due to its purported healing powers across a spectrum of diseases. If “miracle” isn’t hyperbolic enough for you, on the internet it’s also known as “God’s Gift to Man.” Is moringa a miracle or just a mirage? “The enthusiasm for the health beneﬁts of [moringa] is in dire contrast with the scarcity of strong experimental and clinical evidence supporting [the claims]. Fortunately, the chasm is slowly being ﬁlled.” There has been a surge in scientiﬁc publications on moringa, and in the last ten years, the number of articles is closer to a thousand.

What got my attention was the presence of glucosinolates, compounds that boost our liver’s detoxifying enzymes. I thought they were only found in cruciferous vegetables like cabbage, broccoli, kale, collards, and cauliﬂower. But no, it turns out they’re also found in the moringa family, with potency comparable to broccoli. That’s exciting, but why not just eat broccoli, rather than mail-ordering some exotic moringa powder? Is there anything special about moringa?

It’s “been described as the most nutritious tree yet discovered.” How much is that saying, though? Who eats trees? Supposedly moringa “contains higher amounts of…nutrients than most conventional…sources”––10 times the vitamin A of carrots, 12 times the vitamin C of oranges, 17 times more calcium than milk, 15 times more potassium than bananas, 25 times more iron than spinach, and 9 times more protein than yogurt. First of all, even if all this were true, this is for 100 grams of dry moringa leaf. That’s like 14 tablespoons—almost a whole cup of leaf powder. Researchers have had trouble getting people to even eat 20 grams, and so anything more would likely “result in excessively unpleasant taste, due to the bitterness of the leaves.”

And secondly, the nutritional claims in these papers are “adapted from Fuglie,” which evidently is just some lay publication. If you go to the USDA nutrient database, and enter a more doable dose, like the amount you might get in a smoothie (about one tablespoon, for instance), a serving of moringa powder has as much vitamin A as a quarter of one baby carrot, and as much vitamin C as one one-hundredth of an orange. So, an orange has as much vitamin C as a hundred tablespoons of moringa. A serving of moringa powder only has the calcium of half a cup of milk, the potassium of not fifteen bananas, but a quarter of one banana, the iron of a quarter cup of spinach, and the protein of a third of a container of yogurt. So yeah, it may be nutritious, but not off the charts, and certainly not what’s commonly touted. So again, why not eat broccoli? It’s got the A-C-Calcium-potassium-iron-and-protein of broccoli!

Moringa does seem to have anticancer activity—in a petri dish—against cell lines of breast cancer, lung cancer, skin cancer, and fibrosarcoma, while tending to leave normal cells relatively alone. But, there haven’t been any clinical studies. What’s the point in finding out that “[moringa]…enhances [the] sexual performance [of] stressed rats.” What are you supposed to do with that?

Studies like this one, though, started to make things a little interesting. Researchers were testing the effects of a tablespoon of moringa leaf powder once a day for three months on antioxidant status, and saw a drop in oxidative stress, as one might expect from eating any healthy plant food. But they also saw a drop in fasting blood sugars, from prediabetic levels over 100 to more normal levels. Now, that’s interesting. Should we start recommending a daily tablespoon of moringa powder to diabetics? Was it just a fluke? Moringa and blood sugar control: A review of the current evidence next.

Finally today – I reveal what I really think about Moringa Leaf powder.

“Clearly, in spite of the widely held ‘belief’ in the health beneﬁts of [moringa], the interest of the international biomedical community in the medicinal potential of this plant has been rather tepid”—“spectacularly hesitant” [, in fact,] in exploring its nutritional and medicinal potential. …other ‘superfoods’ such as garlic and green tea have enjoyed better reception,” but they also have more scientific support. There are thousands of human studies on garlic and more than 10,000 on green tea, but only a few hundred on moringa.

The most promising appears to be the effects of moringa on blood sugar control. If you have people eat about five cookies, this is the kind of blood sugar spike you get. Add about two teaspoons of moringa leaf powder into the cookie batter, and even with the same amount of sugar and carbs, the blood sugar surge is dampened.

Just having people drink one or two cups of moringa leaf tea before a sugar challenge “suppressed the elevation in blood [sugar] in all cases compared to [those who drank plain water instead].” No wonder moringa is used in traditional medicine practice for diabetes. But, you don’t really know if it can help until you put it to the test.

Diabetics were given about three-quarters of a teaspoon of moringa leaf powder every day for 12 weeks and got significant improvements in measures of inflammation as well as long-term blood sugar control. But, the reason they call it a quasi-experimental study is because there was no control group. The researchers just took measurements before and after, and we know just being in a dietary study can lead some people to consciously or unconsciously eat more healthfully; so, we don’t know what effect the moringa itself had. Even in moringa studies with a control group, it’s not clear if the subjects were randomly allocated. Finally, a randomized placebo-controlled study using a tablespoon of moringa a day failed to show any benefit on blood sugar control in type 2 diabetics.

So, we’re left with a few studies showing potential, but most failing to show benefit. Why not just give moringa a try to see for yourself? That’s a legitimate course of action in the face of conflicting data when we’re talking about safe, simple, side effect-free solutions. But is moringa safe? Probably not during pregnancy, as about 80 percent of “women folk” in some areas of the world use it to abort pregnancies, and its effectiveness for that purpose has been confirmed, at least in rats––though breastfeeding women may get about a half-cup boost in milk production based on “six randomized, placebo-controlled, blinded, clinical trials”.

Just because moringa has “long been used in [folk medicine traditions]” in no way proves that the plant is safe to consume. Lots of horribly toxic stuff, like mercury and lead, for instance, have been used in traditional medical systems the world over. But hey, at least “no major harmful effects of [moringa]…have been reported by the scientiﬁc community,” or more accurately, “no adverse effects were reported in any of the human studies that [had] been conducted to date.” In other words, no harmful effects had been reported, until now.

“Stevens-Johnson syndrome…following [moringa leaf] consumption”: Stevens-Johnson syndrome is probably the most dreaded drug side effect, a rare but potentially fatal condition characterized by “epidermal detachment.” In other words, it can make your skin fall off. Fourteen hours after consuming moringa, a guy broke out. The same thing had happened three months earlier, the last time he had eaten moringa, causing him to suffer “extensive lesions with blister formation over [his] face, mouth, chest, abdomen, and genitalia.”

“This case report suggests that consumption of moringa leaf is better avoided by individuals who are at risk of developing [Stevens-Johnson].” Although it can happen to anyone; HIV is a risk factor.

My take on moringa is that the evidence of benefit wasn’t compelling enough to justify shopping online for something special when you can get healthy vegetables in your local market like broccoli, which has yet to be implicated in any genital blistering.

We would love it if you could share with us your stories about reinventing your health through evidence-based nutrition. Go to NutritionFacts.org slash testimonials. We may share it on our social media to help inspire others.

Everything on the website is free. There’s no ads, no corporate sponsorship. It’s strictly non-commercial.  I’m not selling anything. I just put it up as a public service, as a labor of love – as a tribute to my grandmother – whose own life was saved with evidence-based nutrition.