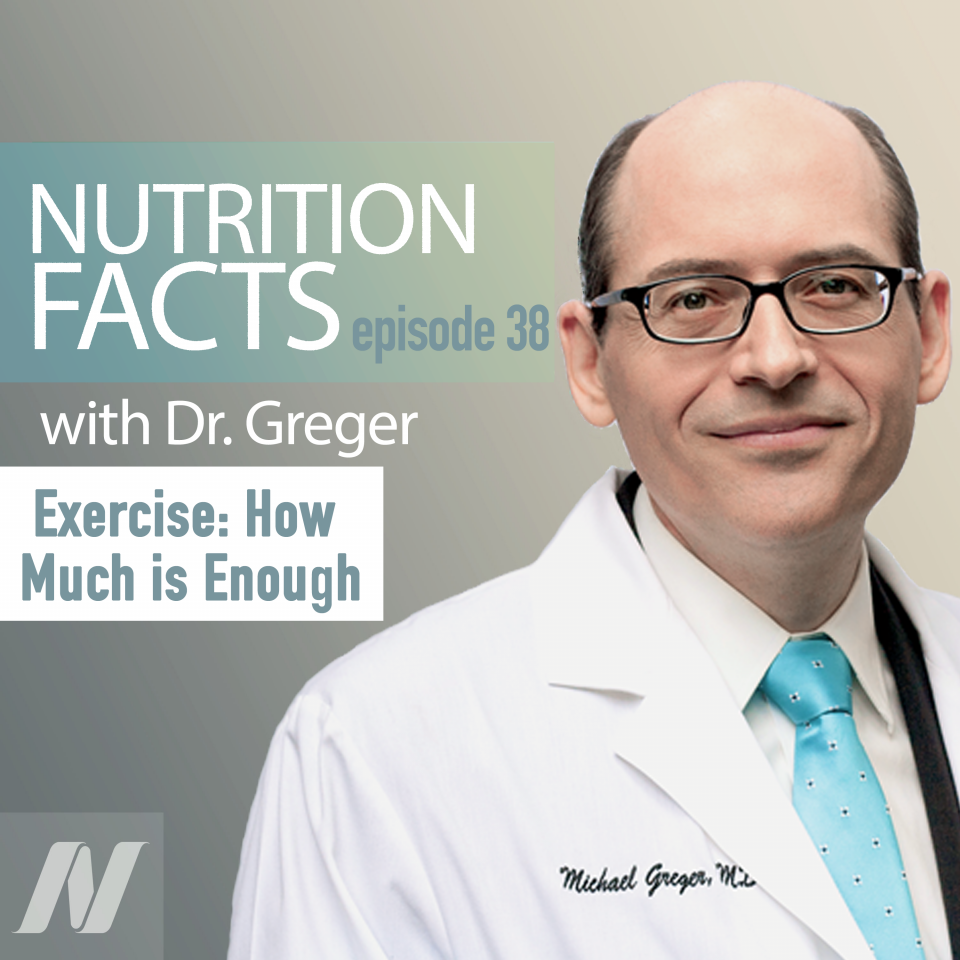 30 minutes? 15 minutes? Every other day? Today we look at the bigger picture about exercise.

This episode features audio from How Much Should You Exercise?, Treating ADHD without Stimulants, and Enhanced Athletic Recovery without Undermining Adaptation.

Hello and welcome to Nutrition Facts. I’m your host, Dr. Michael Greger. Today, we’re going to explore smart nutrition choices based, naturally, on facts. Have a history of high blood pressure in your family?  How about heart disease?  Diabetes? There are foods we can eat that may not only help prevent many of these chronic diseases but even stop them in their tracks.

Today, we’re going to talk about the benefits of exercise – by answering a few simple questions.  How much do we need to exercise –and how much exercise can make a difference?

Physical fitness authorities seem to have fallen into the same trap as nutrition authorities—recommending what they think may be achievable, rather than simply telling us what the science says, and letting us make up our own mind.  So, it’s a good time to take a look at the facts.

Researchers who accept “grants from The Coca-Cola Company” may call physical inactivity “the [greatest] public health problem of the 21st century.” But, actually, physical inactivity ranks down at number five in terms of risk factors for death in the United States, and number six in terms of risk factors for disability. And, inactivity barely makes the top ten, globally. As we’ve learned, diet is by far our greatest killer, followed by smoking.

Of course, that doesn’t mean you can just sit on the couch all day. Exercise can help with mental health, cognitive health, sleep quality, cancer prevention, immune function, high blood pressure, and lifespan extension. If the U.S. population collectively exercised enough to shave just one percent off the national body mass index, two million cases of diabetes, one-and-a-half million cases of heart disease and stroke, and a hundred thousand cases of cancer might be prevented.

Ideally, how much should we exercise? The latest official physical activity guidelines recommend adults get at least 150 minutes a week of moderate aerobic exercise, which comes out to be a little more than 20 minutes a day. That’s actually down from previous recommendations from the Surgeon General, and the CDC, and American College of Sports Medicine, which recommended at least 30 minutes each day.

The exercise authorities seem to have fallen into the same trap as the nutrition authorities, recommending what they think may be achievable, rather than simply informing us what the science says, and letting us make up our own mind. They already emphasize that any physical activity is better than none; so, why not stop patronizing the public, and just tell everyone the truth?

This meta-analysis of physical activity dose and longevity found that the equivalent of about an hour a day of brisk, four-miles-per-hour walking was good, but 90 minutes was even better. What about more than 90 minutes? Unfortunately, so few people exercise that much every day that there weren’t enough studies to compile a higher category.

Okay, but if we know 90 minutes of exercise a day is better than 60 minutes, is better than 30 minutes, why is the recommendation only 20 minutes? I understand that only about half of Americans even make the recommended 20 minutes a day. So, the authorities are just hoping to, you know, nudge people in the right direction. It’s like the dietary guidelines advising us to “eat less candy.” If only they’d just give it to us straight. That’s what I try to do here at NutritionFacts.org.

Exercise has been shown to be effective in controlling ADHD—attention deficit and hyperactivity disorder symptoms and carries only positive side effects. Here’s more.

Every year in the United States, doctors write 20 million prescriptions for stimulants, like Ritalin, to give to kids for attention deficit hyperactivity disorder. And. it goes up every year. In fact, more than any other drug class—another 0.8 million added every year to that 20 million. That’s a lot of amphetamines for a lot of kids.

But, does it work for ADHD? According to the latest review, there isn’t a lot of research out there. But, the current evidence suggests that both “acute and chronic” physical activity can “mitigate ADHD symptoms.”

So, while “medications and exercise with regard to ADHD shows that they both work to more adequately regulate dopamine and norepinephrine levels in the brain,” some of the new long-acting formulations of drugs can work for up to 12 hours—whereas the therapeutic effect of exercise may only last an hour or so.

But, the drugs “produce unwanted side effects, and have the potential for abuse. Exercise has been shown to be effective in controlling ADHD symptoms, [and] has essentially no side effects.”

While that’s not really true, “[I]t should be noted that a major difference in the two treatment modalities is that medications have a defined effect on ADHD symptoms alone, whereas exercise produces physical, mental, and emotional advantages that are far-reaching.” So, exercise does have side effects, but they’re all good.

Might the antioxidant and anti-inflammatory properties of plant-based diets undermine some of the benefits of exercise?  Here’s the research.

Ultramarathon runners may generate so many free radicals during a race that they can damage the DNA of a significant percentage of their cells. Now, “[s]ome…have looked on the exercise-induced increase in free radical production as a paradox.” Why would “an apparently healthy act (exercise)

to detrimental effects through damage to various molecules and tissues”?

“This is somewhat of a misunderstanding, as exercise in [and of] itself is not [necessarily the] healthy act…; [it’s] the recovery after exercise that is [so] healthy—the whole that-which-doesn’t-kill-us-makes-us-stronger notion. For example, “[e]xercise training has been shown to enhance antioxidant defenses”, for example, by increasing the activities of antioxidant enzymes. So, yeah, during the race, ultramarathoners may be taking hits to their DNA. But, check out a week later.

Six days after the race, they didn’t just go back to the baseline level of DNA damage. They had significantly less—presumably because they had so revved up their antioxidant defenses. So, maybe “exercise-induced oxidative damage” is beneficial—kinda like vaccination. By freaking out the body a little, maybe you’ll induce a response that’s favorable in the long run.

“This concept that low levels of a damaging entity can upregulate protective mechanisms…is known as hormesis.” For example, herbicides kill plants, but, in tiny doses, may actually boost plant growth—presumably by stressing the plant into rallying its resources to successfully fight back.

Wait a second, though. Could, then, eating anti-inflammatory, antioxidant-rich plant foods undermine this adaptation response? We saw that berries could reduce inflammatory muscle damage, and greens could reduce the free radical DNA damage. Dark chocolate and tomato juice may have similar effects. The flavonoid phytonutrients in fruits, vegetables, and beans appear to inhibit the activity of xanthine oxidase, considered “the main contributor of free radicals during exercise.” And, the carbs in plant foods may decrease stress hormone levels.

So, in 1999, a theoretical concern was raised. Maybe all that free radical stress from exercise is a good thing, and “increased consumption of some antioxidant nutrients might interfere with these necessary adaptive processes.” So, if you decrease the free radical tissue damage, maybe you don’t get that increase in activity of those antioxidant enzymes.

The cherry researchers responded, look, although it’s likely that muscle damage, inflammation, and oxidative stress are important factors in the adaptation process, minimizing these factors may improve recovery, so you can train more, and perform better. So, there’s kind of theories on both sides. But, what happens when you actually put it to the test? What does the data show?

While antioxidant or anti-inflammatory supplements “may prevent these adaptive events,” researchers found that a berry extract—black currant in this study—although packed with antioxidant and anti-inflammatory properties, actually augmented, boosted, “the health effects of regular exercise” even further.

But, you take antioxidant pills—vitamin C and vitamin E supplements—and, you can actually reduce the stress levels induced by exercise. But, in doing so, you can block that boost in antioxidant enzyme activity caused by exercise. Now, maybe you don’t need that boost if you don’t have as much damage. But, vitamin C supplements may impair physical performance in the first place. Whereas with plant foods, you appear to get the best of both worlds.

Check out this recent study on lemon verbena, an antioxidant-rich herbal tea. It “protects…against oxidative damage, decreases the signs of muscular damage and…inflammation” all without blocking “the cellular adaptation to exercise.” They showed that lemon verbena does not affect the increase of the antioxidant enzyme response promoted by exercise. On the contrary, glutathione reductase activity was even higher in the lemon verbena group. Here’s the level of antioxidant enzyme activity, before and after 21 days of intense running exercises, in the control group. With all that free radical damage that caused, the body started cranking up its antioxidant defenses. But, give a dark green leafy tea, and not only do you put a kibosh on the damage, due to all the phytonutrient antioxidants, you still get the boost in defenses—in fact, in this case, even better.

Everything on the website is free. There’s no ads, no corporate sponsorship. It’s strictly non-commercial. I’m not selling anything. I just put it up as a public service, as a labor of love, as a tribute to my grandmother, whose own life was saved with evidence-based nutrition.

To Pee or Not to Pee