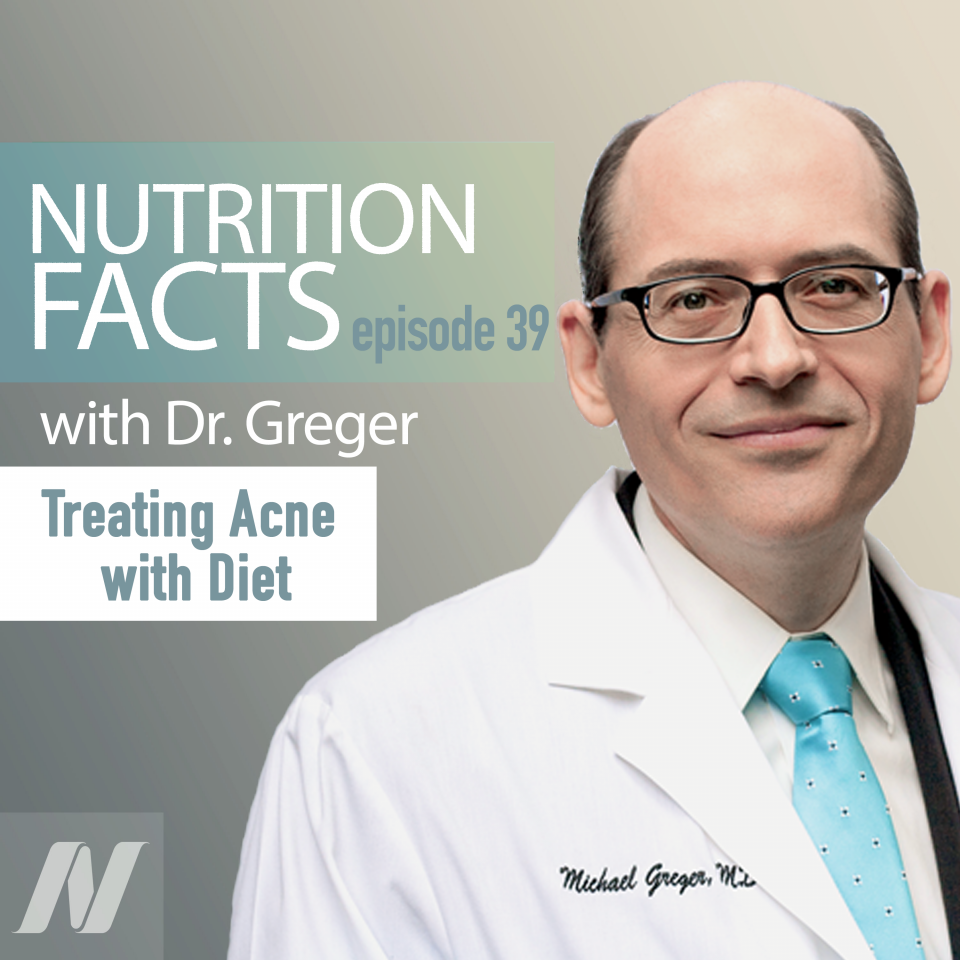 Hello and welcome to Nutrition Facts.  I’m your host, Dr. Michael Greger.  Today, we’re going to explore smart nutrition choices based, naturally, on facts.  Have a history of high blood pressure in your family?  How about heart disease?  Diabetes?  There are foods we can eat that may not only help prevent many of these chronic diseases but even stop them in their tracks.

Acne is one of the most common dermatological problems – affecting millions worldwide.  There is a good deal of research into the causes of acne – and many studies point to nutrition as a way to curtail and control it.

Let’s look at how we can save lives by treating acne with diet.

“Acne is an epidemic skin disease of industrialized countries, reaching prevalence rates of over 85% of teenagers. In the [U.S.], acne nowadays persists [even] after adolescence into the third decade of life in nearly half of men and women.” But it’s considered “a disease of Western civilization”—meaning, in some places, like Okinawa, it was rare or even nonexistent.

“In this regard most common acne…is not [some] ‘physiological’ phenomenon of puberty, but [may represent] a visible risk indicator…pointing to aberrant nutrient signaling promoting chronic epidemic diseases of civilization.” This is what they mean: the dairy, junk foods, meat, and egg proteins in Western diets all conspire to raise the activity of the enzyme TOR, contributing to acne and obesity. So, using diet to suppress TOR may not only improve acne, but may prevent the march to more serious chronic TOR-driven diseases of civilization. So, the excessive TOR stimulation induced by the Standard American Diet may first just manifest as premature puberty and acne, but then may contribute to obesity, diabetes, cancer, and Alzheimer’s.

“Milk is not just food but appears to represent a most sophisticated [hormone-] signaling system activating” TOR, which is of critical concern, given that TOR is recognized as a “fundamental driving force” for a number of diseases.

But if milk is naturally supposed to stimulate TOR, why the problem? Because we’re drinking milk from the wrong species. Cow’s milk is designed for calves. Cow infants grow nearly 40 times faster than human infants. Cow’s milk has three times more leucine, the primary activator of TOR, so it may lead to human TOR overstimulation. It’s like where they do experiments giving donkey milk to rats to see what happens. It makes no sense.

And, of course, milk is for babies. “[C]ontinued consumption of any kind of milk [after childhood,] during adolescence and adulthood” is something that never really happened naturally, and “may have long-term adverse effects on human health.”

“In this regard, [it’s kind of] frightening to realize that more than 85% of [teens in] Western countries exhibit acne.” “This implies that the majority of our…population is living with over-activated [TOR] signaling,” a major disease-causing factor, “which probably may pave the way for the development of other [more] serious diseases…” A history of acne has been associated with breast cancer risk in women, for example, and prostate cancer in men.

So, “[E]arly dietary counseling of teenage acne patients is thus a great opportunity for dermatology, which will not only help to improve acne but may reduce the long-term adverse effects of Western diet on more serious [TOR]-driven diseases…”

So, how do you turn acne on and off via dietary manipulation of TOR? A “comprehensive dietary strategy” to treat acne “can only be achieved by higher consumption of vegetables and fruit[s,]” given “preliminary evidence for the effectiveness of natural plant-derived [TOR] inhibitors in the treatment of acne,” “and [the] reduction of animal-derived food.”

What happens when the most antioxidant-packed dried fruit available is put to the test in a double-blind randomized placebo-controlled clinical trial for moderate to severe acne?

You hear a lot about Traditional Chinese Herbal Medicine, but less about the herbs used in Japan. There’s a root called Rhizoma coptidis, that appears to have similar anti-acne activities to a drug like Accutane, a drug infamous for its side effects, before it was pulled from the market.

But there are side effects to the root, too. A poor fellow took it to clear up his skin and made things worse. The anti-acne active component of the root is thought to be berberine.  Any way to get the active ingredient in a safer plant?  Yes, apparently, barberries. You may remember barberries as perhaps the most antioxidant packed dried fruit available. You can find them cheap at Middle East grocers, where they’re used to make a signature Persian rice dish. Their taste is described as pleasantly acidulous, which is just “doctor-speak” for sour. I love sprinkling them on my oatmeal just because they’re yummy, but evidently have played a prominent role in herbal healing for thousands of years around the world, flamboyantly described in this pharmacology journal as an herbal remedy that has no match in serving the human race. And I just thought they were kind of tangy.

The problem with the herbal medicine literature is that there is often a long impressive list of traditional uses, but little or no science to back it up. And what does exist is often either in vitro or animal data that has questionable clinical applicability. Like, who cares if barberries induce menstruation in a guinea pig, except maybe the guinea pig. So, you end up with drug companies injecting herbs into the penises of rabbits in hopes of coming up with the next Viagra, but few, if any, human studies.

I’ve seen Petri dish studies suggesting anti-cancer effects of barberries on human tumor cells in vitro, or the anti-acne effects on hamsters, but there weren’t any such human studies…until now.

Evidently, there had been anecdotal reports of acne clearing up after barberry juice consumption; so, researchers decided to put it to the test: a double-blind, randomized, placebo-controlled clinical trial of fifty 12- to 17-year-olds with moderate to severe acne. Half got a sugar pill; the other half the equivalent of about a teaspoon of dried barberries three times a day for a month.

The results were remarkable. After four weeks on the placebo, no change, just as many pimples as before. But in the barberry group, a 43% drop in the number of zits, and about a 45% drop in inflamed zits. That’s extraordinary. And a spoonful costs about eight cents. No reported side effects; healthy for you anyway. The only potential concerns I could find were to not eat them during pregnancy, and we just don’t have good data on barberry consumption during lactation; so, best to stay away from them during breastfeeding, as well.

The Harvard Nurses’ Study found an association between high school dairy intake and severe physician-diagnosed acne.  Here are some details.

The National Dairy Council denies that milk intake causes acne, citing the American Academy of Dermatology. Let’s take a peek, shall we, at the official journal of the American Academy of Dermatology. The Harvard Nurses’ Study, no less. A study, in fact, supported by the National Dairy Council itself! “High school dietary dairy intake and teenage acne.” They studied 47,000 women. What did they find? “We found a positive association with acne for intake of total milk and skim milk. We hypothesize that the association with milk may be because of the presence of hormones and bioactive molecules in milk.”

Yeah, but there’s a difference between association and causation. From the accompanying editorial in the Journal of the American Academy of Dermatology:

“The papers from the Harvard School of Public Health establish an association between milk consumption and acne. But how could milk cause acne? Because drinking milk and consuming dairy products from pregnant cows exposes us to the hormones produced by the cows’ pregnancy, hormones that we were not designed to consume during our teenage and adult years. It is no secret that teenagers’ acne closely parallels hormonal activity… So what happens if exogenous hormones are added to the normal endogenous load? And what exactly is the source of these hormones? Consider that, in nature, milk is consumed from a mother, whether human or bovine, until weaning occurs. Normally, the mother then ceases lactation before the next pregnancy occurs— so that consuming milk from a mother pregnant with her next offspring is not a common occurrence. We’ve all seen nature films of animals chasing their offspring away to encourage weaning at the appropriate time. Further, in nature the offspring consumes only the milk of its own species—but both of these natural rules are broken by humans. Viewed objectively, human consumption of large amounts of another species’ milk, especially when that milk comes mainly from pregnant cows during the human’s normally post-weaned years, is essentially unnatural.”

To see any graphs, charts, graphics, images, or studies mentioned here, please go to the Nutrition Facts podcast landing page. There, you’ll find all the detailed information you need plus links to all the sources we cite for each of these topics.

Everything on the website is free. There are no ads, no corporate sponsorship. It’s strictly non-commercial. I’m not selling anything. I just put it up as a public service, as a labor of love, as a tribute to my grandmother, whose own life was saved with evidence-based nutrition.

How Much Exercise is Enough?