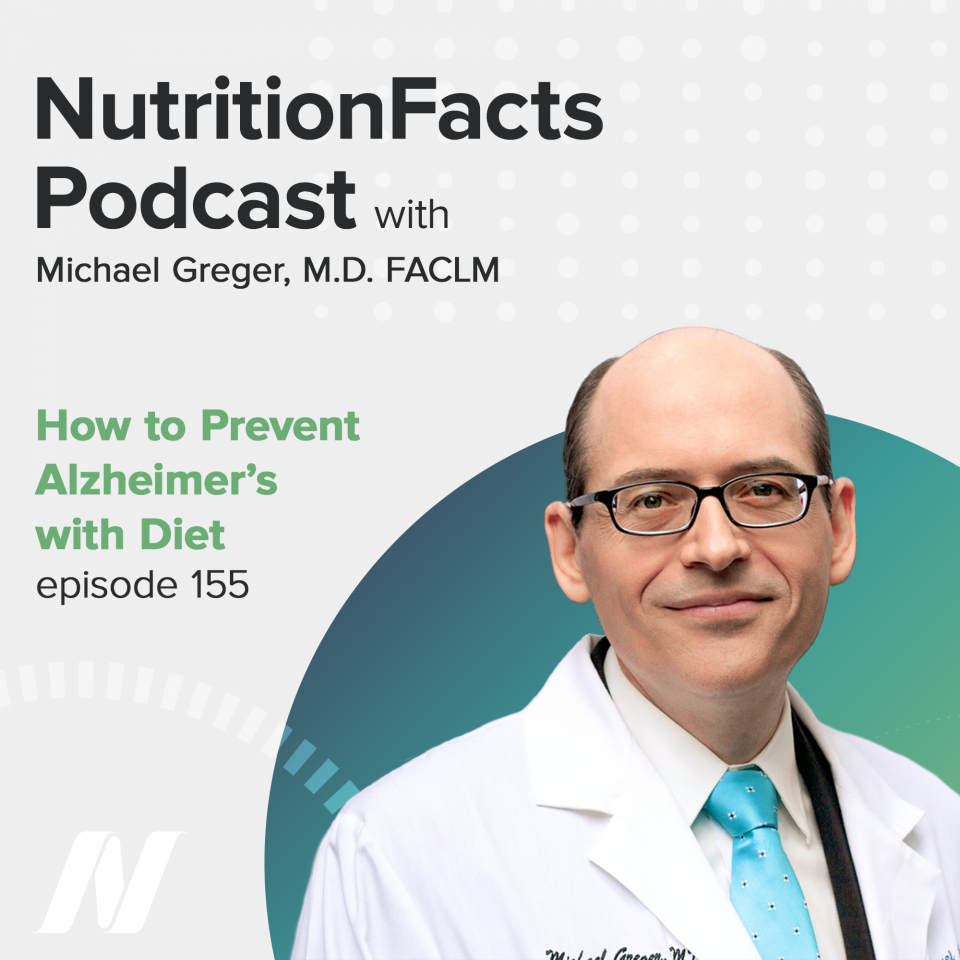 We may not be able to cure it, but we can work to prevent it.  Here’s how.

Today, we focus on Alzheimer’s disease, which kills nearly 85,000 Americans each year.  It is one of the most physically and emotionally burdensome diseases, for both sufferers and caregivers alike.

Here’s the good and the bad news, Alzheimer’s Disease Is incurable, but preventable. Diet and lifestyle changes could potentially prevent millions of cases a year. Today we’re going to discover the best way to do that.

In our first story, we explore the evidence that our meat-sweet diets play a cause-and-effect role in dementia

What is behind the dramatic increase in dementia in Japan over recent decades? Maybe it’s rising obesity rates or the increases in cholesterol, saturated fat, and iron from increases in animal products and meat.  Overall, calories went up just about 10% in Japan, whereas animal fat and meat consumption rose 500%, about 10 times the rise in sugary junk. Now, during this timespan, rice consumption went down, but the thinking is that rather than white rice somehow being protective, maybe they were just eating something worse instead. It’s like when you find fish consumption is correlated with less disease, you wonder if it’s because they’re eating that rather than some worse meat.

If you look across multiple countries, you see a similar pattern, with “the most important dietary link to Alzheimer’s appearing to be meat consumption, with eggs and high-fat dairy also maybe contributing.” There appears to be a really tight correlation between Alzheimer’s and per capita meat supply. And, then, studies within countries uncover similar findings, with Alzheimer’s and cognitive decline associated with meaty, sweety, fatty diets, whereas most plant foods are associated with risk reduction.

This could be for a variety of reasons. Animal products tend to have more copper, mercury, lead, and cadmium, and no folate but contain saturated fat and cholesterol, and pro-inflammatory advanced glycation end products, so many mechanisms that dietary modification may be our best bet for reducing risk of Alzheimer’s disease. But, how do we know it’s cause and effect? The evidence that meat consumption is causally linked to Alzheimer’s disease, well, there’s the strength of the association, the consistency across different types of studies, the fact that the dietary changes preceded the risk of dementia, the dose response more meat linked to more risk, a bunch of plausible mechanisms. We know “meat is a risk factor for other chronic diseases,” but there’s never been randomized controlled trials to put it to the test.

When you read reviews of the damaging effects of high-fat diets to the brain and cognition, “a number of factors are proposed to account for the high-fat diet-induced damage to the brain  oxidative stress, insulin resistance, inflammation, and changes to blood vessels and the integrity of the blood-brain barrier.” But, these are based mostly on studies of rodents. Yes, high fat diets can cause energy dysfunction in the brain, based on fancy MRI techniques.

Those who only had low-grade stenosis were pretty stable over time in terms of their cognitive function and ability to dress themselves and other activities of daily living, whereas those with more clogging started slipping over the years, and those who started out with the most brain atherosclerosis rapidly went downhill, and twice as likely to progress to full-blown Alzheimer’s.

“Chronic consumption of standard Western diets rich in saturated fat and cholesterol may compromise our cerebrovascular integrity,” compromise the blood vessels in our brain. So, of course, drugs are recommended, “pharmacological modulation” of diet-induced dysfunction, but why not just try to eat healthier in the first place?

Next up we discover how advanced glycation end products in our diet may suppress sirtuin enzyme activity and play a role in age-related brain volume loss.

Each of us has six billion miles of DNA. How does our body keep it from getting all tangled up? There are special proteins called histones, which act like spools, with DNA as the thread. Enzymes called sirtuins wrap the DNA around the histone spools, and in doing so, silence whatever genes were in that stretch of DNA, hence their name SIRtuins, which stands for silencing information regulator.

Although they were discovered only about a decade ago, the study of sirtuins has become one of the most promising areas of biomedicine, since they appear to be involved in promoting healthy aging and longevity. Suppression of this key host defense is considered a central feature of Alzheimer’s disease.

Autopsies of Alzheimer’s victims reveal that loss of sirtuin enzyme activity is closely associated with the accumulation of plaques and tangles in the brain that are characteristic of Alzheimer’s disease. Sirtuins appear to activate pathways that steer the brain away from the formation of plaque and entangled proteins. Because a decrease in sirtuin activity can clearly have deleterious effects on nerve health, they’re trying to come up with drugs to increase sirtuin activity, but why not just prevent its suppression in the first place?

Glycotoxins in our food suppress sirtuin activity, these so-called advanced glycation end products, or AGEs. Our modern diet includes excessive AGE’s, which can be neurotoxic. High levels in the blood may predict cognitive decline over time.

If you measure the urine levels of glycotoxins flowing through the bodies of older adults, those with the highest levels went on to suffer the greatest cognitive decline over the subsequent nine years.

As we age, our brain literally shrinks. In our 60s and 70s we lose an average of five cubic centimeters of total brain tissue volume every year, but some lose more than others. Brain atrophy may be reduced in very healthy individuals. And a few people don’t lose any brain at all. Normally, we lose about 2% of brain volume every year, but that’s just the average. Although the average brain loss for folks in their 70s and 80s was 2.1%, some lost more, some lost less, and some men and women lost none at all over a period of four years.

Researchers in Australia provided the first evidence linking AGEs with this kind of cerebral brain loss. So limiting one’s consumption of these compounds may end up having significant public health benefits.

Because sirtuin deficiency is both preventable and reversible by dietary AGE reduction, a therapeutic strategy that includes eating less AGEs may offer a new strategy to combat the epidemic of Alzheimer’s.

Some of these glycotoxins are produced internally, particularly in diabetics, but anyone can get them from smoking and eating, particularly foods high in fat and protein.

In a previous video I listed the 15 foods most contaminated with glycotoxins, mostly chicken; but also pork, beef, and fish which may help explain why those who eat the most meat may have triple the risk of getting dementia, compared to long-time vegetarians.

Finally, today we look at how the spice saffron is pitted head-to-head against the leading drug for severe Alzheimer’s disease.

What’s the latest on treating memory disorders with the spice saffron? Saffron had evidently been “widely used in the Persian medical tradition for memory problems,” but it wasn’t put to the test until this study we’re going to talk about today which I profiled, showing Alzheimer’s dementia symptoms continuing to get worse on placebo, but getting better on saffron over a 16-week period. The researchers concluded that, at least in the short term, saffron is “safe and effective in mild-to-moderate Alzheimer’s disease.” What about head-to-head versus the leading drug used for such patients? It appeared to work just as well, but with significantly less vomiting, a common side effect of the drug. So, that’s where we were as of 2010. What’s the update?

In 2013, we got the first glimpse at a potential mechanism. Alzheimer’s disease involves “brain nerve cell destruction.” Our brain cells can be killed by the buildup of tangles, or the buildup of amyloid plaques, where “aggregates of a protein called amyloid beta act as a poison.” But, in a petri dish, at least, adding the red pigment found in saffron, called crocin, significantly reduces this amyloid clumping, an effect that can be plainly seen under an electron microscope. So, the component of saffron that makes it so colorful appears to have “the ability to prevent amyloid formation.” So, maybe that’s why saffron helps in Alzheimer’s disease. But, do you have to catch it early?

Note this was just for mild-to-moderate Alzheimer’s. What about moderate-to-severe Alzheimer’s? We didn’t know, until now. Head-to-head against the leading drug for severe Alzheimer’s, and again, saffron seemed to help just as well. And, one might consider just as well better, since there haven’t been any serious adverse effects attributed to saffron, whereas the drug is associated with an increased risk of “sleepiness, weight gain, confusion, hypertension, nervous system disorders, and falling.”

And, the saffron study wasn’t funded by supplement or spice companies, just noncommercial public grants. But, all the studies were done in Iran, which controls about 90% of the saffron crop. So, there’s a national interest in promoting saffron consumption, just like the New Zealand government funds research on kiwifruit though who else is going to fund studies on a simple spice?