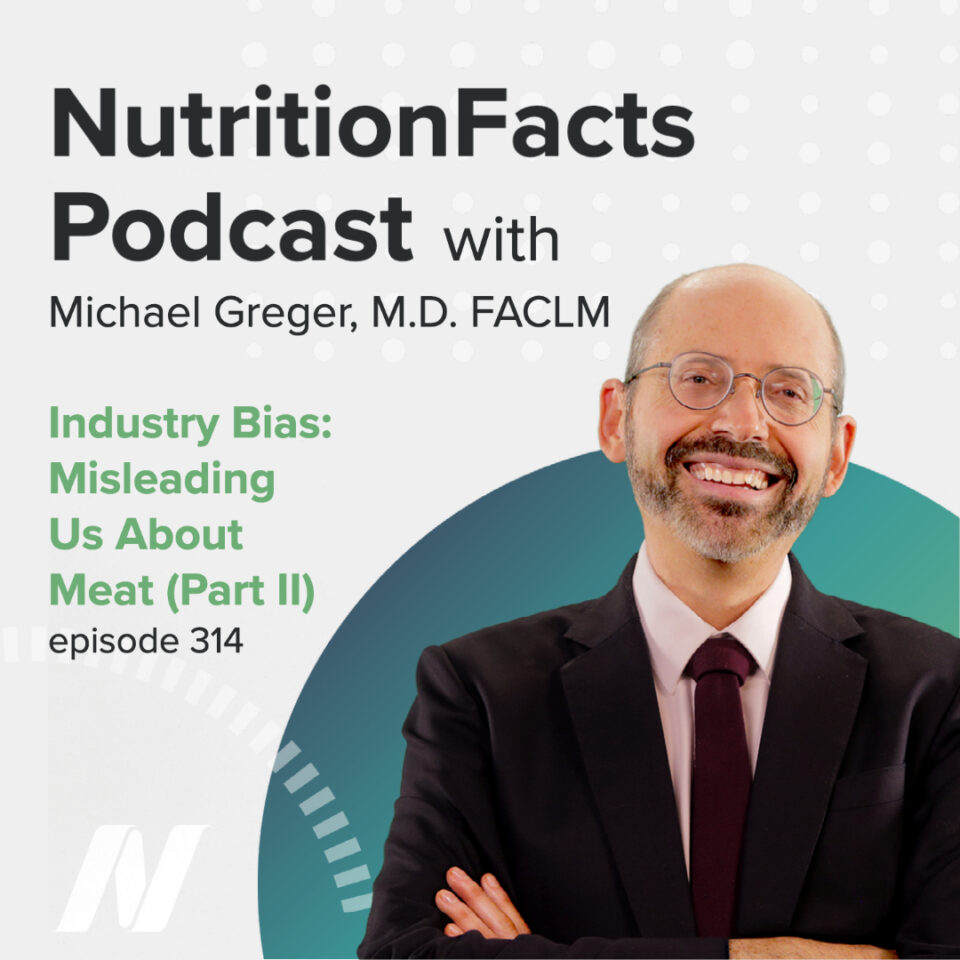 Worried about getting cancer or dying prematurely? You might want to ignore dietary recommendations brought to you by Big Sugar and Big Meat. This episode features audio from The Health Risks vs. Benefits of Meat Consumption, How Big Meat Manipulated the Science, and How Much Does Meat Affect Longevity?. Visit the video pages for all sources and doctor’s notes related to this podcast.

Today, we conclude our series on how industries impact dietary and health guidelines. Did you know that the meat industry’s own study concluded that meat consumption increased the risk of cancer, heart disease, diabetes, and premature death? Here’s the story.

A series of papers published in the Annals of Internal Medicine that largely discounted all but the highest quality randomized studies reached a conclusion directly contrary to the public health advice we’ve heard for years. They suggested that we should continue our current consumption of both red and processed meat. The authors based their exclusion of evidence on the so-called GRADE (Grading of Recommendations Assessment, Development, and Evaluation) criteria, which were mainly developed for evaluating evidence from drug trials. We need randomized double-blind, placebo-controlled trials for drugs, but strictness of these criteria would probably cause evidence for just about every dietary, lifestyle, and environmental factor related to chronic disease to be graded as “low” or “very low.” If the GRADE criteria were used to evaluate the evidence for other factors related to diet (such as inadequate fruits and vegetables, or too much soda or alcohol), whether or not exercise is good, safe sex, sleep, smoking, or air pollution, “none of the current recommendations on these issues would be supported by high- or even moderate-quality evidence” using the drug trial criteria.
But even after ignoring major parts of the available evidence, they still found an association between meat intake and an increased risk of cancer. And not just cancer. They found that adherence to dietary patterns lower in red or processed meat intake may result in decreased risk for premature death, cardiometabolic disease, and mortality (meaning the risk of getting and dying of diseases like heart disease and type 2 diabetes), as well as the risk of getting cancer and dying from cancer. Yet, they still concluded, in their dietary guideline recommendations: “continue your current red meat consumption,” “continue your processed meat consumption.” Forget the whole premature death thing, cancer, heart disease, diabetes—just keep eating your burgers and bacon.
So, you have these dietary guidelines developed by some self-appointed panel that are tantamount to promoting meat consumption––despite their own findings that high consumption is harmful to health. How did they square that, contradicting the evidence generated from their own meta-analyses? There’s only one body of evidence. They found the same risk that all the other reviews found. “So, they’re not saying meat is less risky; they’re just saying the risk is acceptable.”
Well, you do have to consider the risk and beneﬁts. We covered the harms. “[Their] own data show that a moderate reduction in red and processed meat consumption can reduce total mortality by 13 percent, heart disease mortality by 14 percent, cancer mortality by 11 percent, and type 2 diabetes risk by 24 percent.” What are the benefits? “In short, omnivores enjoy eating meat.” Uh, okay. “[G]iven peoples’ attachment to their meat-based diet, the associated risk reduction [in our leading killers like cancer, heart disease, and diabetes] is not likely to provide sufﬁcient motivation to reduce consumption of red meat or processed meat.”
So, therefore, eat up! In fact, they even say straight out that unlike the other dietary guidelines suggesting we limit consumption of stuff because of like the cancer thing, these other guidelines have paid little or no attention to the reasons people eat meat, whereas they did a systematic review of preferences regarding meat consumption, and people who eat meat enjoy eating meat. Maybe that’s even why they do it.
They’re generally unwilling to change their meat consumption, even in response to health concerns; so, the panel believed (the panel, you’ll remember, with generous support of a group getting millions every year from the meat industry)…the panel believed that for the majority of individuals, the desirable effects, like lowering your risk of family-devastating cancer and heart attacks associated with reducing meat consumption, probably do not outweigh the undesirable effects, like having to give up all that yummy meat. This is what led them to make their recommendation to “continue current consumption.”
That sounds like something straight out of the journal Meat Science. Why should we keep eating red meat? Because of the enjoyment. “People [also] like to smoke.” “They like to drink soda, they like to have unsafe sex.” “It’s kind of like saying: We know [motorcycle] helmets can save lives, but some people still prefer the feeling of the wind in their hair.” So, let’s just tell people to not wear helmets? But you’ll actually see this argument. “Complying with dietary recommendations imposes a ‘taste cost’ on consumers,” so how about “socially desirable dietary recommendations that are most compatible with consumer preferences” (you know, that best balance of health benefits against “taste cost”)?
So, hey, even if science told us that eating butter is unhealthy, its taste justiﬁes the continuation of using it.
What do you expect from NutriRECS, the meat-industry-partnered panel that also published the paper criticizing the sugar guidelines, funded by the soda and candy industries?
They aim to produce nutritional guideline recommendations based on the preferences of patients. So, what’s next? Just telling people to eat doughnuts and ice cream all day? Yet the Annals published the meat papers with a press release saying, “No need to reduce red or processed meat consumption for good health.” Using the same methodology and rationale, they might as well have said: “No need to quit smoking for good health” or “No need to exercise for good health.” As Dr. Katz, director of Yale’s Prevention Research Center, put it: “Guidelines opposing the very data on which they purport to be based are not science; they are anti-science.”
In our next story – Big Meat downplays the magnitude of meat mortality.

Industry Bias: Misleading Us About Meat (Part I)

All You Need to Know About Allulose