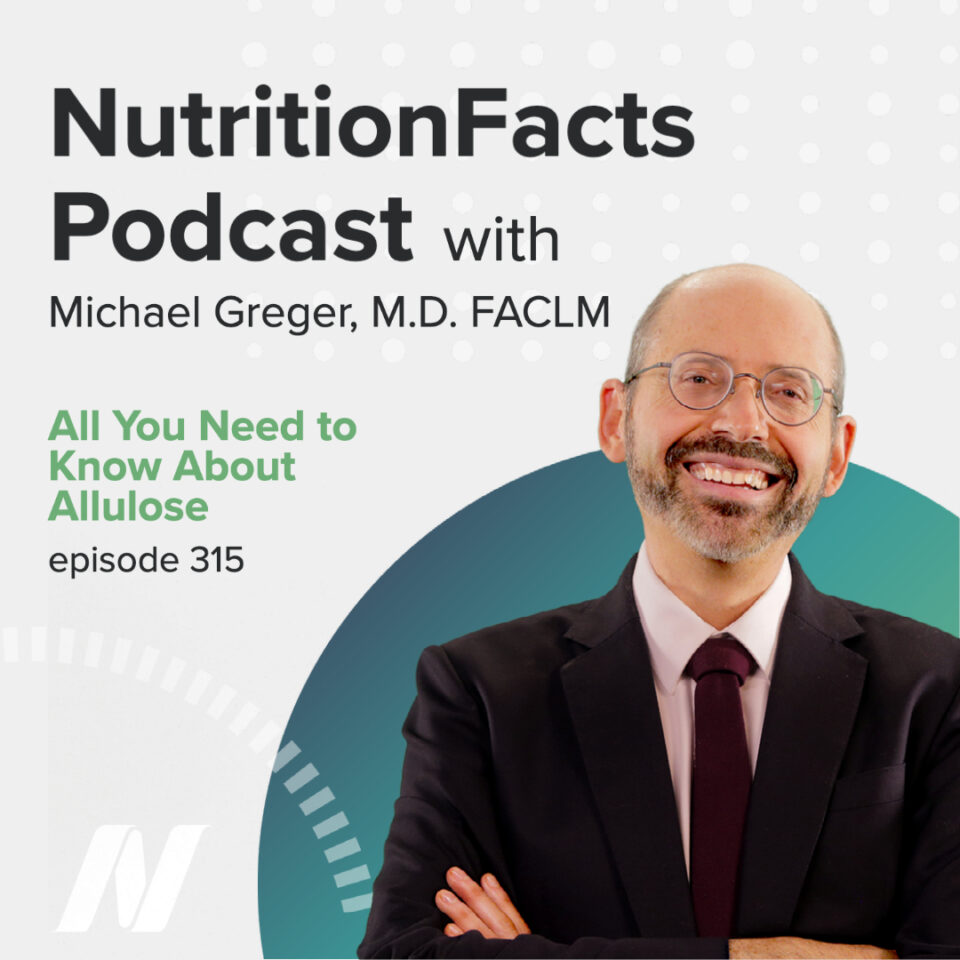 It tastes pretty sweet and looks a lot like sugar, but is it good for you? This episode features audio from Does the Sweetener Allulose Have Side Effects? and Is Allulose a Healthy Sweetener?. Visit the video pages for all sources and doctor’s notes related to this podcast.

Today, we look at the safety of fourth generation sweeteners – such as the rare sugar allulose.

First, there was sugar and high fructose corn syrup, the original industrial sweeteners. They were cheap, but had lots of empty calories and contributed to diseases such as obesity, type 2 diabetes, cavities, and metabolic syndrome. So, then came the second-generation sweeteners, the artificial sweeteners, the colored pastel packets: Nutrasweet, Splenda, and Sweet & Low. Practically zero calories, but adverse effects have been described; cautions have been raised. For example, artificial sweeteners were found to induce glucose intolerance by altering the gut microbiome, thereby producing the counterintuitive effect of inducing metabolic derangements. They also taste kind of funny. Enter the third-generation sweeteners: sugar alcohols, such as sorbitol, xylitol, and erythritol. Low-calorie sweeteners, however, their laxative effects can create difficulties, which brings us to rare sugars like allulose, which are natural sweeteners with low or zero calories and a sugar-like taste.
For those of you who haven’t heard of allulose, it’s been through a bit of a rebranding. Just like rapeseed oil morphed into canola, forcing municipalities to update their town slogans, allulose used to be called psicose, a sugar you may not want to eat in the shower.
The name “psicose” is derived from the antibiotic from which it was isolated. That’s a strange origin story for a sweetener. In the Frontiers of Bioengineering and Biotechnology, emphasis is placed on the fact that allulose is a real and natural sugar rather than artificial. But ironically, if you look at the reference they cite, it talks about how allulose is made, via functionalized polyhydroxyalkanoate nano-beads decorated with D-tagatose 3-epimerase (DTE) produced in recombinant endotoxin-free branded bacteria.
Now, technically allulose is a natural sugar, a so-called rare sugar, which have been defined by the International Society of Rare Sugars as sugars that are present in limited quantities in nature. But recent technological advances, such as enzymatic engineering using genetically modified microorganisms, now allow manufacturers to produce otherwise rare sugars like allulose in substantial quantities. But small amounts have pre-existed in the food supply; so, the FDA granted it generally-recognized-as-safe status. But it’s been like really small amounts, like a few dozen milligrams, or a quarter of a quarter of a quarter of a teaspoon.
See, allulose is generated when fructose is heated. allulose is created incidentally in the process by which high fructose corn syrup is made. So, basing the safety of allulose on the fact that it’s already been present in our food supply isn’t very convincing. You don’t know if it’s safe until you put it to the test.
Unlike table sugar, allulose is safe for the teeth—isn’t apparently metabolized by cavity-causing bacteria to make acid…and build up plaque. It doesn’t raise blood sugars, even in diabetics. It can be labeled as having zero calories, though technically it may have like one and a half calories per teaspoon, similar to what you see with erythritol. Also like erythritol, it’s only about 70 percent as sweet as table sugar but has almost the same taste, performance, and texture as regular sugar. Are there any toxicities?
Allulose is considered a relatively nontoxic sugar. What does that mean? Well, in pets, we know a sweetener called xylitol can be extremely dangerous in dogs. As little as a half teaspoon in a 30-pound dog can be life-threatening, whereas a similar dose of allulose apparently wouldn’t be a problem––though like over a half cup at a time could make them sick. This was a single dose study, though. The long-term safety of allulose was tested over a period of a few months and didn’t seem to cause any harmful effects at a dose of about one and a half teaspoons a day for healthy 30-pound dogs. In fact, their cholesterol actually went down, leading the investigators to suggest clinical studies to see if it’s something vets should start prescribing for overweight pooches.
What about in people? When the dose of allulose was gradually increased to identify the maximum single dose for occasional ingestion, no cases of severe gastrointestinal symptoms were noted until a dose of 0.4 g/kg of bodyweight was reached, which could be about seven teaspoons, with severe symptoms of diarrhea noted once you get up around nine teaspoons. And, you say, who could eat that much sugar at a time anyway? A single can of Coke has 10 teaspoons, and a bottle of Mountain Dew has nearly twice that. So, allulose is clearly not suitable as a standalone sweetener for sugary beverages.
In terms of a daily upper limit given in smaller doses throughout the day, once you hit around 17 teaspoons a day, depending on your weight, people start getting severe nausea, abdominal pain, headache, and diarrhea. So, people should probably stay under single doses of about seven teaspoons, and not to exceed about 15 for the whole day. The average American may be getting 17 teaspoons of added sugars a day. So, it’s certainly not something the food industry can completely switch over to.
In this way, allulose is close to xylitol in terms of maximal single dose, whereas the average-weight man in the U.S. could get away with 14 teaspoons of erythritol at a time, and the average woman, 15 teaspoons. Still not enough to sweeten a bottle of Coke but offers a little more leeway for sweetening tea or sprinkling on a grapefruit or something.
Allulose is claimed to provide health benefits, though, compared to erythritol. Fourth generation sweeteners like allulose are said to have as an advantage: additional functions. We’ll find out if that’s true, next.

Are rare sugars like allulose a healthy alternative for traditional sweeteners? Let’s find out.

Help for Your Skin