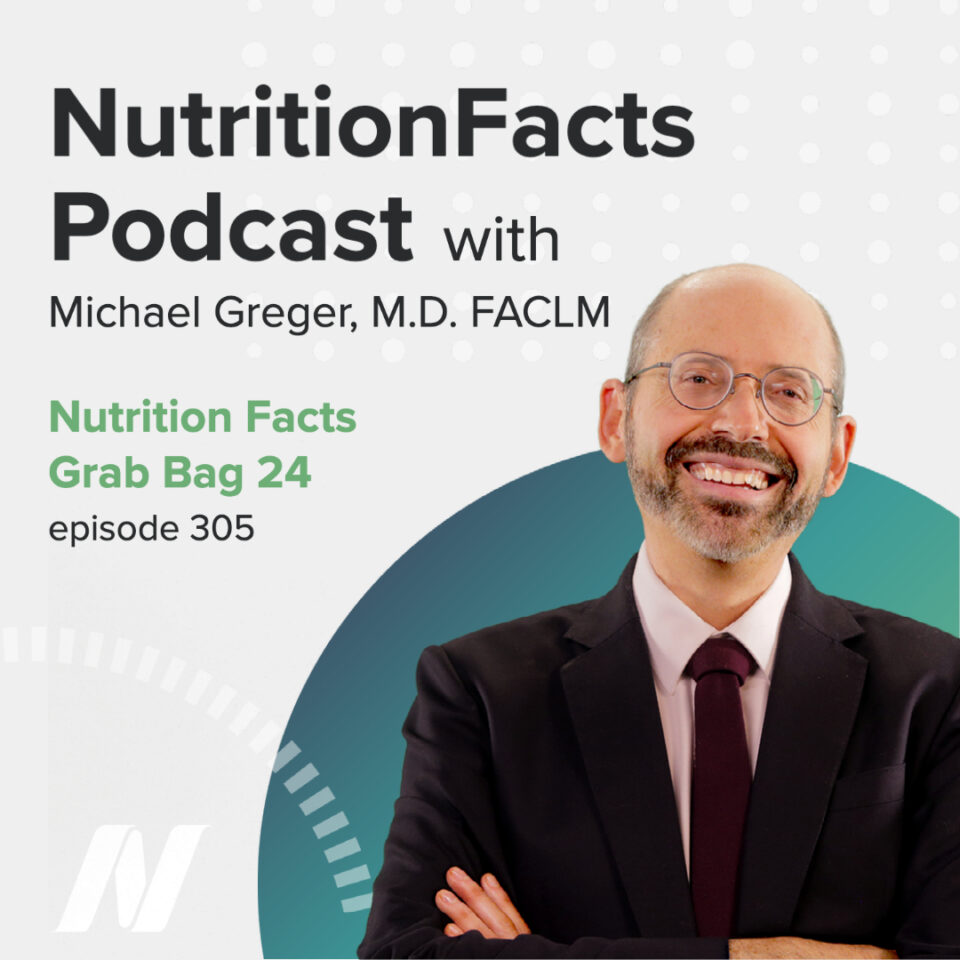 Today, on the Nutrition Facts podcast, we have a story on the micromort, a unit of communicating risk to patients. We’ll also hear about the health benefits of eating nuts and we’ll dive into the fascinating story about how we won the fight to ban trans-fat.

This episode features audio from Micromorts: How Risky Is It to Go Under Anesthesia?, Are the Health Benefits of Nuts Limited to Those Eating Bad Diets?, and How We Won the Fight to Ban Trans Fat. Visit the video pages for all sources and doctor’s notes related to this podcast.

It’s time for the NutritionFacts grab bag, where we look at the latest science on a whole variety of topics. And we start today with a story on the micromort. And no – that’s not a nickname for your short uncle. Think of it as a unit of comparing and communicating risk to patients.

Hundreds of millions of operations are performed every year, and the risk of death is typically around a half a percent, to which patients might say things like, “I could just die as easily crossing the road,” making it clear they really don’t understand the difference in magnitude of risk. One way to communicate risk is by analogy. For example, just going under anesthetic carries about a 1 in 100,000 chance you won’t wake up. How much is that? Well, that’s about the same risk as an expert sky dive. Okay, but that still may be kind of hard to wrap your head around. It’s hard to think in terms of small numbers. Imagine discussing a 0.0017 mile x 0.00227 mile rug. How big even is that? We need more digestible units. Enter the micromort as a unit of comparing and communicating risk to patients.
A micromort is a unit equivalent to a one in a million chance of dying. One in a million is like the chances of ﬂipping a coin, and getting 20 heads or tails in a row––or a little less than the chances of getting a royal flush. But the real utility is to help compare different risks to one another, using the same metric. For example, driving a hundred miles entails about a one in a million chance of death; so, that’s one micromort. Scuba diving is like five micromorts per dive; so, each dive is as risky as driving 500 miles. So, now we have a way to directly compare the risk of surgical procedures and common activities.
Giving birth is as risky as driving from NY to LA and then back again, but getting a cesarean is more than twice as risky. Even something like a simple hernia repair carries the same risk of dying as like sky diving 200 times. Now obviously, sometimes you have no choice, but death from varicose vein surgery or circumcision could probably be avoided. I was surprised to learn that regular horseback riding is about four times deadlier than rock climbing, but getting chemo and radiation for head and neck cancer is riskier than rock-climbing for 500 years, driving 5 million miles, or jumping 5,000 sky dives, etc.
One leading cause of death I really didn’t talk about in How Not to Die is accidental death. We have approximately a one in a million chance of dying just by accident every day of our lives, and about half of that risk is dying in a car crash, based on U.S. averages. Then, there are all sorts of other ways. I am surprised to learn Americans have about a 1 in 200,000 chance every year of dying from a foreign body entering an orifice other than the mouth.
Other things we may want to avoid include climbing Mount Everest––about 30 times riskier than coal mining or base jumping. Trains and planes are actually equivalent over the same distance, but riding a motorcycle is about 50 times deadlier than riding in a car, though cycling to a destination is riskier too: about 10 times as deadly as driving in the near term.
Here’s a good example of how one can use micromort comparisons to help put things in perspective. Certain types of breast implants can cause a rare type of cancer, a type of breast implant-associated lymphoma. You can imagine how scary this is for the millions of women who have implants, but check out the risk compared to the risk of other common activities. Your risk of dying from this kind of cancer is less than a single day of skiing. Now, it’s probably better to die quick on the slopes than all the slow suffering of cancer, and risk of bankrupting your family, but at least it can put the risk of the implant-cancer killing you in context.

In our next story, we ask – do nut eaters live longer simply because they swap in protein from plants in place of animal protein?

The American Journal of Clinical Nutrition is the highest ranked peer-reviewed scientific journal in nutrition. That should tell you a lot about the field, since it’s published by the American Society of Nutrition, whose sustaining partners include the Sugar Association, candy bar and soda companies, the corn syrup people, and the meat, dairy, and egg industries. And this is the highest ranked nutrition journal. The fact that the National Cattlemen’s Beef Association is a sustaining partner may help explain their publication of this article.
Imagine you’re in the pocket of Big Beef and Big Pig. How could you possibly pull off a study showing that eating red meat does not negatively inﬂuence cardiovascular disease risk factors? A meta-analysis of randomized controlled trials showing that eating more versus less red meat does not inﬂuence cholesterol or blood pressure? Drs. Barnard and Willett pointed out the fatal flaw in their editorial, “The Misuse of Meta-analysis in Nutrition Research,” by asking the question “Compared to What?” Of the 39 trials that they had chosen on LDL cholesterol, nearly 90 percent of them were just swapping one meat for another, comparing red meat to white meat.
They were using chicken control diets or fish control diets. And we know that when it comes to cholesterol, the impact of beef consumption is just as bad as fish or poultry, and so that’s how they pulled it off. They just swapped meats. That’s like publishing a study saying total Twinkie intake does not negatively inﬂuence risk factors by switching Twinkies with Ding Dongs. Those randomized to zero Twinkies didn’t do any better. Yeah, because now they were eating Ding Dongs. It’s a classic drug industry trick: testing your drug against something known to be terrible.
Whereas if you swap out meat for plant-based meats—plant-based sausages, plant-based chicken patties, and veggie dogs—you end up with significantly lower cholesterol. Well duh, you say, there’s less saturated fat in plant-based meats. But even independent of saturated fat content, you end up with higher LDL cholesterol with red meat or white meat—any kind of meat—compared to non-meat protein sources. The researchers conclude that this is in keeping with recommendations promoting diets with a high proportion of plant-based food but, based on cholesterol effects, white meat like chicken and turkey is just as bad as red. And fish may be even worse––though what they often did is try to standardize the saturated fat content by adding something like butter. But at the same saturated fat content, fish appears to be worse than beef, and chicken is just as bad as beef. Yet plant protein sources like legumes, soy, and nuts—beans, split peas, chickpeas, lentils, soybeans, and nuts—did better.
Switch out a single serving of even lean beef with the same amount of calories of nuts or soybeans, and you can lower LDL bad cholesterol, a key risk factor for the #1 killer of men and women in the United States and around much of the world. But wait, is that why a single serving of nuts a day is associated with 22 percent reduction in the risk of premature death? Why millions of deaths every year may be attributable to inadequate nut intake? Maybe the benefit is just because they’re eating nuts instead of meat? No. The drop in heart attacks amongst more frequent nut eaters is just as strong or even stronger among vegetarians. The reduced mortality associated with nut consumption is independent of health condition. It’s not just health nuts eating nuts. In fact, in a comparison of a dozen different food groups, nuts beat out even vegetables when it came to a lower risk of premature death.

Finally today – we look at the secret to the public health community’s triumph, when past attempts to regulate the food industry have failed.

What Is H. Pylori?