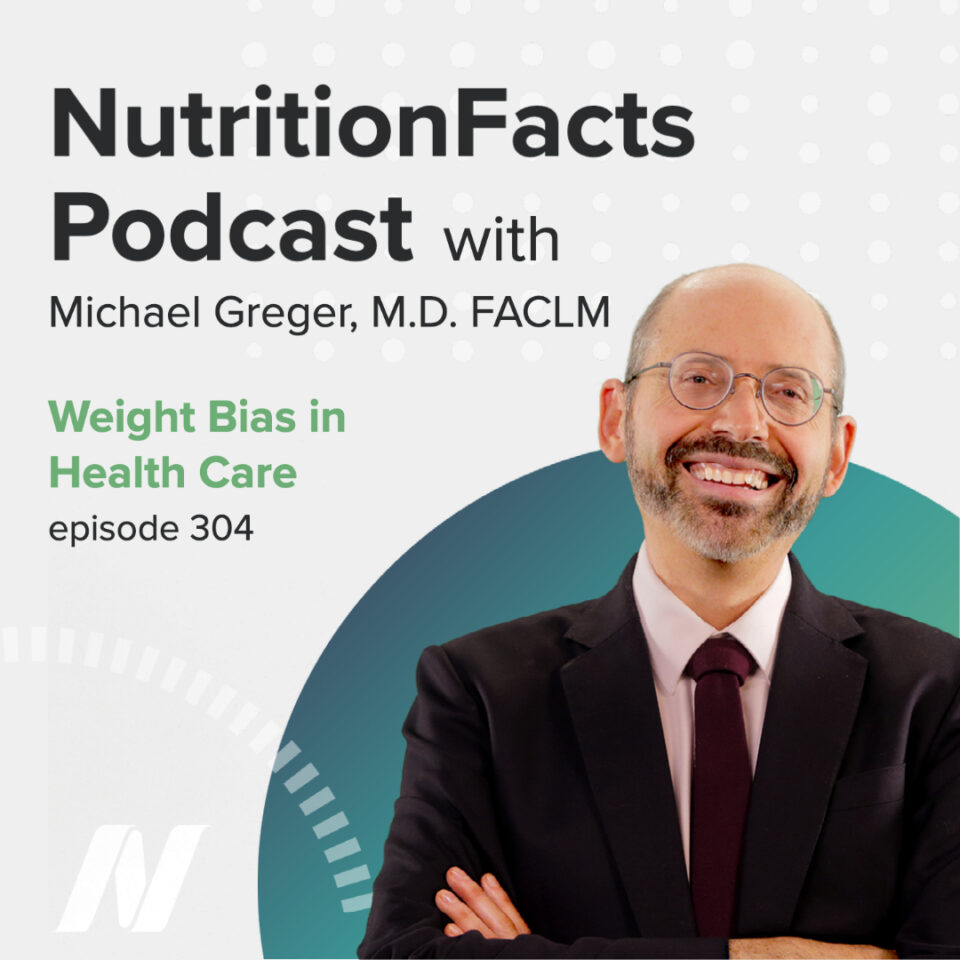 Today, on the Nutrition Facts podcast, we look at a rampant form of discrimination that can lead to some very bad health outcomes.

This episode features audio from Weight Bias: Hating Their Guts and The Impacts of Weight Bias in Health Care. Visit the video pages for all sources and doctor’s notes related to this podcast.

Did you know that research has consistently shown that healthcare professionals are biased against people classified as overweight or obese? In our first story – we look at how common this problem is.

Described as the last “acceptable” form of bias, weight stigma is the rampant discrimination and stereotyping of overweight individuals. Fifty overweight women were asked to keep a diary of all the times they felt they were being stigmatized for their weight. Over a single week, more than a thousand instances were recorded. An overweight woman may expect to be harassed (such as called names or insulted), run into physical barriers (like unable to fit into public seats), or discriminated against (such as perceived poorer service at restaurants or stores) on average about three times a day. Obese men report three times less discrimination than women of the same size; so, maybe it’s only a daily occurrence for them.
They’re not just being paranoid. Studies using professional actors presenting as job applicants made up to appear overweight with the Hollywood magic of theatrical prostheses were significantly more likely to be discriminated against than when appearing as their normal weight selves. This employment bias was found to be especially prejudiced against overweight women compared to men.
Attitudes can also be explored in surveys. In a comparison of 16 stigmatized social groups, such as homosexuals and homeless people, only drug addicts and smokers were regarded with higher levels of disgust than obese individuals. The researchers did note, however, there was effectively a tie: obese people were “rated just as disgusting as politicians.”
This weight stigma starts surprisingly young. Children as young as three years old describe overweight peers as “mean,” “stupid,” “lazy,” and “ugly.” Then, there was that famous study published back in 1961.
Children in summer camps and schools across a swath of different social, cultural, and ethnic backgrounds in California, Montana, and New York were asked to rank the following images as to who they liked best, including a child in crutches with a brace on their leg, a child in a wheelchair, a child with one of their hands missing, a facially disfigured child, or an obese child. In every population of kids they tested, there was “remarkable uniformity.” The obese child always came in dead last.
That was ages ago, though. But in 2003, researchers published the 40-year follow-up. The study was repeated and…the title of the study gives it away: “The Stigmatization of Obese Children: Getting Worse.” The obese child was liked even less! This parallels trends throughout society, with nearly a 70 percent jump in perceived weight discrimination recorded in national surveys since the mid-nineties.
Attitudes among teachers may not be helping. More than a quarter of teachers and other school staff surveyed felt that becoming obese is “one of the worst things that could happen to a person.” Even parents can be biased, providing less support for college for their overweight daughters compared to thinner siblings. As two prominent obesity researchers commented, “It is a strong prejudice indeed when parents discriminate against their own children.”
What about doctors? One representative national survey found that more than half of physicians viewed obese patients as “awkward, unattractive, ugly, and noncompliant.” About a quarter of nurses agreed or strongly agreed to the statement: “Caring for an obese patient usually repulses me.”
This antagonism can have serious health consequences for those who may need it the most. For example, obese women are at higher risk for developing cervical, endometrial, and ovarian cancers. Yet they are less likely to be screened. Morbidly obese patients only have about half the odds of getting their recommended ¬¬¬pelvic exams. Part of this may be avoidance on the part of the patient, but some doctors just turn obese patients away. The Sun Sentinel polled OB/GYN practices in Florida, and found that as many as one in seven refused to see heavier women––for example, setting weight cut-offs for new patients starting at 200 pounds.
Even doctors who welcome obese patients have been found to give them short shrift. Physicians randomized to receive a medical chart of a migraine patient who was either presented as average weight, overweight, or obese said they would give the obese patient about 28 percent less of their time. And it’s less quality time. Recorded doctor’s visits found physicians tend to build less emotional rapport with overweight patients.
Even obesity specialists profess increasingly explicit anti-fat attitudes. Worsening in surveys taken between 2001 and 2013, obesity specialists described fat people as significantly more “lazy, stupid, and worthless.” Even in the medical literature, you’ll find lines like this, an example from Annals of Internal Medicine: “obesity is an aesthetic crime: it is ugly.”
The good news is that they appear to be able to hide their disdain. In a study entitled “Obese patients overestimate physicians’ attitudes of respect,” despite the negative attitudes doctors harbored towards their obese patients, the same patients expressed their satisfaction with their providers. The researchers concluded, “While physicians may be successfully playing the part, the lack of true respect suggests…the authenticity of the patient–physician relationship should be questioned.”

In our final story today, we ask – how might weight stigma be a vicious cycle?