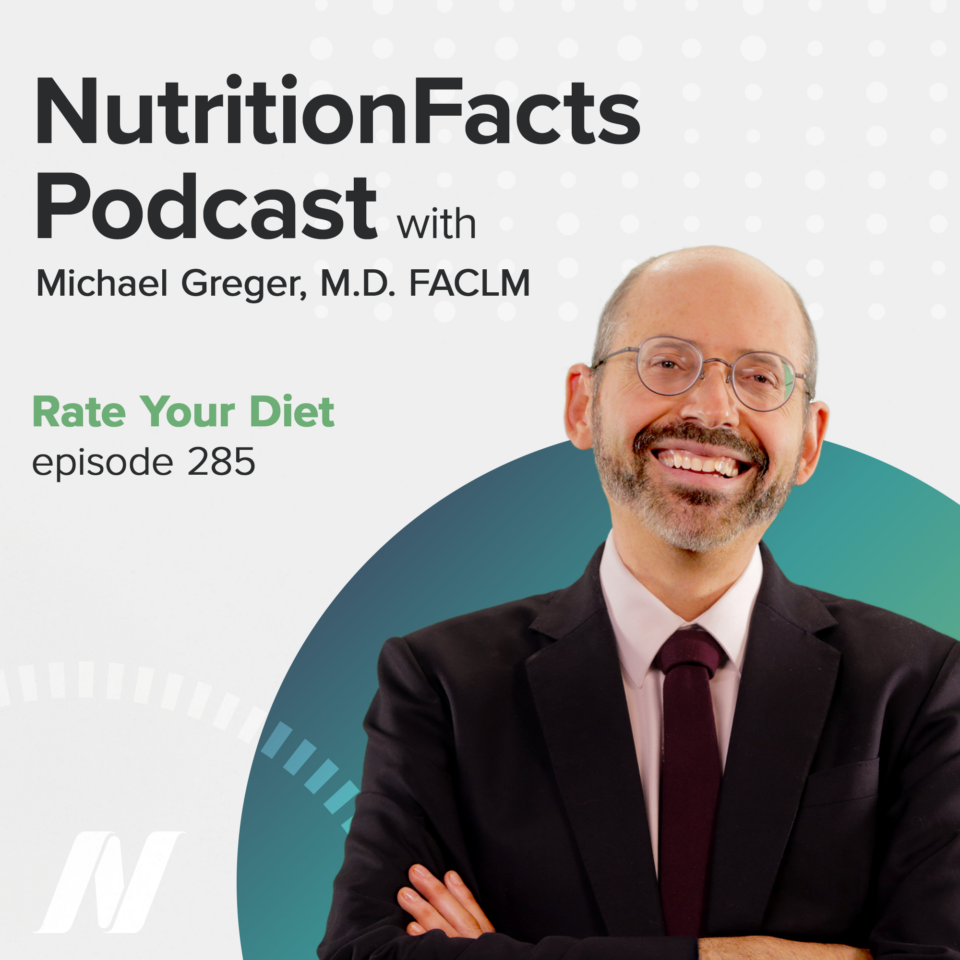 This episode features audio from Calculate Your Healthy Eating Score and Plant-Based Eating Score Put to the Test. Visit the video pages for all sources and doctor’s notes related to this podcast.

As you know – I like to put things to the test. And today – we’re going to ask YOU to do that with your diet, using the phytochemical index. Anything with the word ‘chemical’ in it may sound a little fishy, but  phytochemicals can be  good for you.) Here’s the first story.

How do you rate the quality of people’s diets? Well, what could be more nutrient dense than a vegetarian diet? Indeed, if you compare the quality of vegetarian diets compared with nonvegetarian diets, the more plant-based diets do tend to win out, and the higher diet quality in vegetarian diets may help explain better improvements in health outcomes. However, vegetarians appeared to have higher refined grain intake, eating more foods like white rice and white bread that have been stripped of much of their nutrition. So, just because you’re eating a vegetarian diet doesn’t mean you’re necessarily eating optimally healthy.

Those familiar with the science know the primary health importance of eating whole plant foods. So, how about a scoring system that just adds up how many cups of fruit, and vegetables, and whole grains, and beans or chickpeas or split peas or lentils, and how many ounces of nuts and seeds per 1,000 calories, with or without counting white potatoes. Well, just looking at the total intake of whole plant foods doesn’t mean you’re not also stuffing doughnuts in your face. So, you could imagine proportional intake measures, based on calories or weight, to determine the proportion of your diet that’s whole plant foods. In that case, you’d get docked points if you eat things like animal-derived foods—meat, dairy, or eggs—or added sugars and fats.

My favorite proportional intake measure is McCarty’s Phytochemical Index. I love it because of its sheer simplicity, defined as the percent of dietary calories derived from foods rich in phytochemicals. So, it’s a score from 0 to 100, the percentage of your calories that are derived from foods rich in phytochemicals, which are biologically-active substances naturally found in plants that may be contributing to many of the health beneﬁts obtained from eating whole plant foods. I mean, monitoring phytochemical intake in the clinical setting could have great utility in assisting people with optimizing their dietary intake for optimal health and disease prevention. However, the quantiﬁcation of phytochemicals in foods or tissue samples is impractical—expensive, laborious; but hey, this concept of a ‘phytochemical index’ (PI) score could be an alternative, simple method of monitoring phytochemical intake.

Theoretically, a whole food, plant-based or vegan diet that excluded reﬁned grains, white potatoes, hard liquors, and added sugars and oils could achieve a perfect score of 100, whereas sadly, the most current American diets might be lucky to hit 20. Let’s see what’s going on. In 1998, our shopping baskets were filled with about 20 percent whole plant foods, and more recently that has actually shrunk.

Wouldn’t it be interesting if researchers used this index to try to correlate it with health outcomes. That’s exactly what they did. Look, we know that studies have demonstrated vegetarian diets have a protective association with weight and body mass index—five dozen studies have shown that vegetarians had significantly lower weight and BMI compared with non-vegetarians. And even more studies show that high intakes of fruits, vegetables, whole grains, and beans may be protective, regardless of meat consumption. So, researchers wanted to use an index that gave points for whole plant foods. They used a phytochemical index, and tracked people’s weight over a few years––which again I profiled in my video, ”Calculate Your Healthy Eating Score”––on a scale of 0 to 100, simply reflecting what percentage of your diet is whole plant foods. And even though the healthiest eating tier only averaged a score of about 40, which meant the bulk of their diet was still made up of processed foods and animal products, just making whole plant foods a substantial portion of the diet may prevent weight gain and decrease body fat. So, it’s not all or nothing. Any steps we can make to increase our whole plant food intake may be beneficial.

A couple more studies have been performed since, and they all point in the same direction. About a third of the odds of abdominal obesity at higher healthy plant intake, and significantly lower odds of high triglycerides. So, the index may be a useful dietary target for weight loss, where there is less focus on calorie intake and more on increasing intake of these high-nutrient lower-calorie foods over time. The latest such study, published 2020, suggests the same is true for childhood obesity.

Even at the same weight, the same amount of belly fat, those eating plant-based have higher insulin sensitivity, meaning the insulin they make works better in their body, perhaps thanks to the compounds in plants that alleviate inﬂammation and quench free radicals. And indeed, things seemed to improve as people ate more and more plants.

No wonder researchers found 91 percent lower odds of prediabetes for people getting more than half their calories from healthy plant foods. Significantly lower odds of metabolic syndrome and high blood pressure. Only about half the odds of being diagnosed with hypertension over a three-year period among those eating more plants. Even mental health was impacted; about 80 percent less depression, 2/3 less anxiety, 70 percent less psychological distress.

What about the Dietary Phytochemical Index and benign breast diseases, such as fibrocystic diseases, ductal ectasia, fatty necrosis, and all sorts of benign tumors? The same thing was found. Seventy percent lower odds of those diseases. OK, but what about breast cancer? A higher intake of healthy plant foods was indeed associated with lower risk of breast cancer, even after controlling for a long list of other factors. And not just by a little bit. Eating twice the proportion of plants compared to the standard American diet was linked to more than 90 percent lower odds of breast cancer.

What evidence do we have that scoring higher is actually better? Let’s find out.

A few years ago, a proposal was published for a healthy eating index, and I thought it might be interesting to look at the latest USDA dietary survey to see how the standard American diet is doing. The index is simple; it’s a score of 0 to 100, which simply represents the percent of dietary calories derived from foods rich in phytochemicals. Phytochemical is just a more technical term for phytonutrient, since nutrient implies essential for life, whereas phytochemicals are merely essential for a long, healthy life.

How are Jane and Joe Sixpack doing? Here is the latest data on the standard American diet: 3% of calories come from beans and nuts; 3% from fruit; 5% is vegetables; 23% from grain; 17% is added sugars, like candy and soda and other junk; 23% comes from added fats—butter, margarine, oil, shortening; and 26% of the American diet is meat, dairy, and eggs.

For the healthy eating index, we only get to count phytonutrient-rich foods, since they’re the ones most associated with chronic disease prevention, treatment, and cure. So, first off, the reason they’re called phytonutrients is that, by definition, they are found in plants—derived from the Greek word “phyton,” for plant.

So, automatically we start with a score of 74. Neither lard nor candy are phytonutrient-rich either, so taking away the added fats and oils, we’re down to 34. But the grain category is a combination of both whole grains—rich in phytonutrients—and refined grains, which had the phytonutrients largely removed. Only 4% of the American diet is composed of whole grains—like oats, barley, whole wheat, brown rice—and the rest is highly processed garbage, like white flour and cornstarch.

Yikes, down to 15! But it gets worse. 2/3 of our vegetables are white potatoes, half of which are potato chips. The average American eats 23 calories of potato chips every day. But none of the white potato products count, since they contain relatively few phytonutrients.

Similarly, a third of our fruit calories are low-phytonutrient juices, and so the typical American diet rates 12, out of 100. So, on a scale of like 1 to 10, we get about a 1.

How do you score a perfect 10? “Theoretically, a vegan diet that excluded refined grains, potato products, hard liquors, and added sugars and oils could have a [perfect dietary index rating] of 100. Sadly, the [score] of most current American diets would be unlikely to be as high as 20 [yeah we wish it were 20!]—which means that there [is] quite ample room for improvement.”